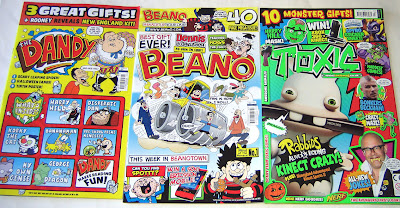 Whilst adult collectors may hate them, the fact is that plastic toys attached to comics do attract the young demographic the titles are aimed at. Even though publishers charge an extra pound or so for "gift" issues these days, those are the issues that sell better than the ones without gifts. It's not a situation that's likely to change anytime soon.

Some of the questions this policy raises though is that although gift issues may attract extra readers in the short term, will they be loyal enough to stick with the comic? And will the higher price put off regular readers who were loyal? When one looks at the bigger picture, will comics lose more readers than they gain?

It's a tough call. As recent circulation figures showed, when The Dandy and The Beano had a run of several weeks without gifts, at a lower price, the average sales figures dropped! Seems that kids of the 21st Century expect comics to come complete with a toy or three. It's now seen as part of the whole package, and a comic without a gift is somehow considered incomplete by some children and their parents. Yet the cost of the toy (and especially if the comic/toy is bagged) pushes the unit cost up, resulting in higher cover prices, which undoubtedly does put off some buyers. It's far from a perfect situation, but what can be done?

However, I can't believe that today's kids are so disinterested in the content of the comics that the toy is the only attraction. From feedback (letters and drawings) received from readers we do know that many kids do still enjoy the strips (and judging by many photos submitted to readers' pages have shown, many kids do save their comics). This week, The Dandy has three gifts; a jumping spider, fake fangs, and a pull-out Tin-Tin 2012 calendar. Inside, the comic is packed with new material from Nigel Parkinson, Jamie Smart, Wayne Thomson, Andy Fanton, Karl Dixon and more, including Postman Prat written by David Mason and drawn by me... 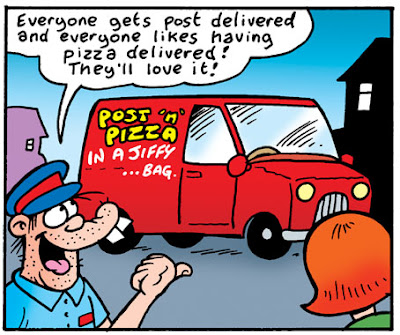 In the latest Toxic there's a whole bunch of gifts, including this board game I supplied the artwork for... 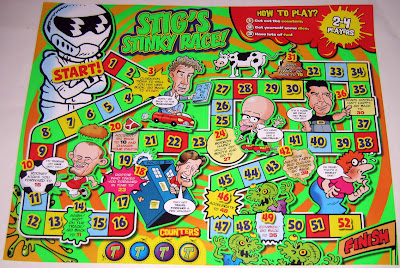 ...plus strips by various creators including Anthony Williams, Stik, and myself.

Incidentally, regarding the sales figures of The Dandy, Alexander Hay has written an excellent article on the subject here: http://www.olderiswiser.com/articles/save-the-dandy

There's been a lot of comment spouted about the comic in recent months, ranging considerably from constructive criticism to gutter-level abuse of the artists themselves, but Alexander's article is one of the most intelligent and level-headed opinions I've read on the matter so far.

I read the article and agree totally with him..

That why I hope Strip Magazine and Phoenix will bring comics in a new direction and new audiences..
I'm also fed up with mindless violence...swearing..crudeness..no awe or wonder or fun in American Superhero comics etc..

New audience of all types...ages..gender..interests..is the key..

With sales low, I decided to do my bit and go out and buy the Dandy... but wow, is it hard to find (and I live in central London) - only very large branches of Smiths seem to have it, while may other comics are much easier to find - same with the Beano too. Several newsagents with big magazine stocks said 'ah we don't stock comics' when asked. I also wonder why Forbidden Planet on Shaftesbury Ave seems to be an entirely DC Thompson free zone... couldn't they help out here?

Thanks for the feedback on my article. Two things I ought to add, though - firstly, getting children into comics is very important.

Having my tiny 6 year old mind blown by 2000AD in 1983 (Prog 341, in case you were wondering) was a formative experience that's stayed with me ever since. But I still needed my parents to buy it for me first, as was the case with Transformers, Conan, Oink...

The other problem is that there are less and less 'entry point' comics for this to happen these days. DC has certainly raised its profits with its relaunch, jam packed with smut and sleaze (though Animal Man remains excellent), but as the Starfire fiasco demonstrated, pandering to 'the fans' risks alienating the audience.

Anyway, today is Dandy day, and I am more than happy to admit being mildly obsessed by Pre-Skool Prime Minister & My Own Genie.

You're right that it is becoming harder to find in newsagents. To make matters worse, my local Smiths has redone their shelving system again, with a high 6' display. You guessed it; The Dandy is on the top shelf, even though Beano is within a child's reach. I really don't follow the logic of retailers.

@Alexander, excellent points again. I feel that some US comics publishers aim at fans because they've forgotten (or never acquired) the skills to aim at an all-ages readership. I discovered Marvel Comics when I was 7, and they were perfect for anyone from 7 to 70.

Marvel and DC do still publish some comics for younger readers but they're very wet compared to the comics of the Sixties. (I understand superheroes in the Marvel Adventures line aren't allowed to hit anyone!) "The New 52" DC Comics go to the other extreme of course, with more sex and violence than ever for their Teen+ rated comics. I'm no prude but I think it diminishes Batman as a character to see a full page image of him caught in the act with Catwoman. It wasn't a pretty sight was it?

British comics are awesome... and i'm not saying this out of self interest, but they are, truly. Big, colorful, with toy gifts to boot!
Finding a stack of brit comics at a second-hand bookshop in Uruguay, was the best thing that ever happened to 10 year old me, at a time when most comics available were American superheroes, which inevitably seemed so dull afterwards!