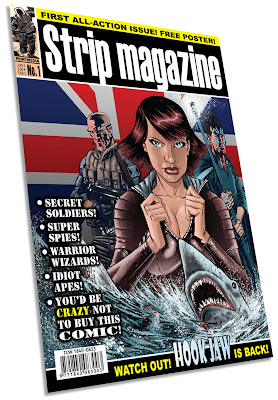 News just in that, sadly the new 68 page UK adventure monthly Strip Magazine, which was due to launch tomorrow, has been delayed.

"Despite our best efforts, the first issue of STRIP Magazine will not be on sale in UK comic shops tomorrow (20th) due to courier problems beyond our control" said editor John Freeman in an official announcement this afternoon.

"We will advise of new on sale date as soon as it is confirmed," continued John, "but please be assured we're working closely with Diamond to get our first issue of our action-adventure anthology into UK comic shops as soon as we can."

"Naturally, we are extremely disappointed and annoyed by this turn of events and we know that this news will disappoint many people waiting for the Magazine's debut."

"As soon as we have definite news we will publish it on the Print Media Productions web site: www.printmediaproductions.com " John concluded.

I've known John personally for 30 years. He's one of the good guys in this business and I know the amount of hard work that he's put into Strip Magazine, how dedicated he is to launch a new adventure comic that Britain deserves, and how much he'll be making sure that Strip Magazine No.1 will be available as soon as possible. Having seen a preview of the contents I can tell you that the comic will be worth waiting for and is definitely worth your support. I'm hope you'll all join me in wishing Print Media Productions the best of luck and will continue to look forward to this great new comic when it arrives soon.

I'd gotten my hopes up too.:-(It does not bode well when they can't even get the first issue printed.I can't see it happening now.

The comic HAS been printed. It's just delayed by the courier from Bosnia to Britain. Once it arrives it'll be on sale.

I can't seem to make the subscription form submit, it just does nothing! Surely I can't be alone, they must be losing loads of potential subs.

You're right. It doesn't work beyond the first page does it? Presumably they're waiting until No.1 is actually in the country, but it could lose potential advance subscriptions as you said.

We had a similar problem with the Mirabilis hardcover. There was no problem at all with the printing, and it was no fault of the publisher that delays held it up getting into Britain.

The important thing is that when it did arrive it looked fantastic, and I'm sure Strip Magazine will be the same.

It's a nuisance about the sub form, though!

Living in the States...I hope they can do digital copies or at least an overseas subscription. I don't think i've been so excited about a new comic in yoinks!

Hi Flint, According to the website they will be doing a digital edition for the iPad, and subscriptions will also be available.

Glad to hear there will be a digital version. Totally missed that on their site so thanks for pointing it out. I want to support this and it looks good but storage space is a finite resource at home. If Clint and Comic Heroes would go that route I'd be buying every issue of those too.

I'm following quite a few titles on the iPad now. Have probably spent more this year than any time in the last decade, mainly due to the convenience of the digital format. I commute cross-country for work frequently so I've been catching up on a lot of recent series on long train journeys thanks to the half price sales on iTunes / Comixology.

Still a print junkie for 2000AD and Iron Man unfortunately.