Charlie Chaplin in The Funny Wonder 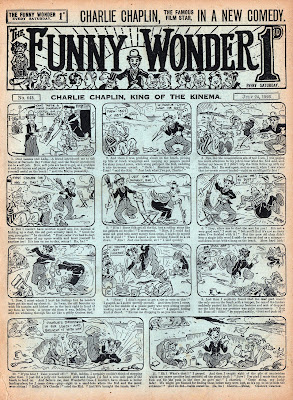 The presence of celebrity-based strips in The Dandy over the past 12 months has been a cause of controversy amongst some readers. Some people see them as intrusive, and on the Comics UK forum one pseudonymous fan went as far as to say that The Dandy is now "brainwashing our children into the facile, banal, empty celeb-worshipping modern culture".

However I think most of us see the strips for what they're intended to be; a bit of fun, and something familiar to draw in new readers. Far from being "celeb-worshipping", the strips are actually gently mocking the TV stars they caricature.

The adverse reaction is surprising really, as the inclusion of celebrities in comics isn't a new concept. From Dan Leno's Comic Journal in 1898, through comics like Film Fun (1920), to The Goodies in Cor!! in the 1970s and Big Daddy in Buster in the 1980s, British comics have long upheld such a tradition. 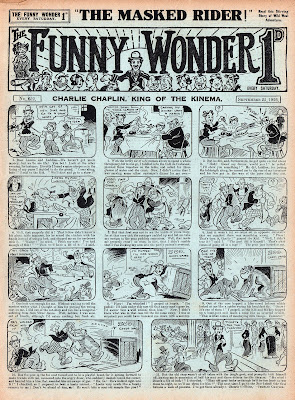 Here from my collection are a few examples of one of the early comic celebs; Charlie Chaplin on the cover of The Funny Wonder from way back in 1926. The strip began in the comic in 1915 and ran until 1944. The regular artist was Bertie Brown, although Freddie Adkins ghosted Bertie on occasion. Judging by the lettering it's possible that issues 652 and 653 shown here are by Adkins, although I believe 643 is by Brown.

I hope you enjoy these classics from 85 years ago! 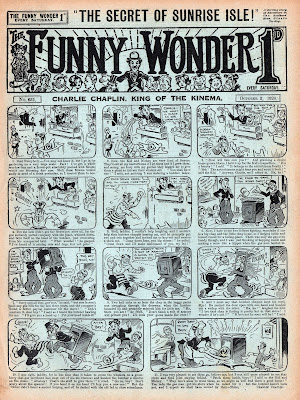 Great to see and nice seeing 'The Kid'

made you think the stone deaf sign that the guy wore round his neck..

Interesting to note that The Kid is still appearing alongside Chaplin five years after the film's release.

Yes, I'm not sure how long The Kid appeared in the strip. I've just looked at issues from the early 1930s to 1940 and he's not in those. By that time though Charlie had moved to an interior strip, so perhaps The Kid was left behind then.