The Valiant Book of Mystery and Magic 1976 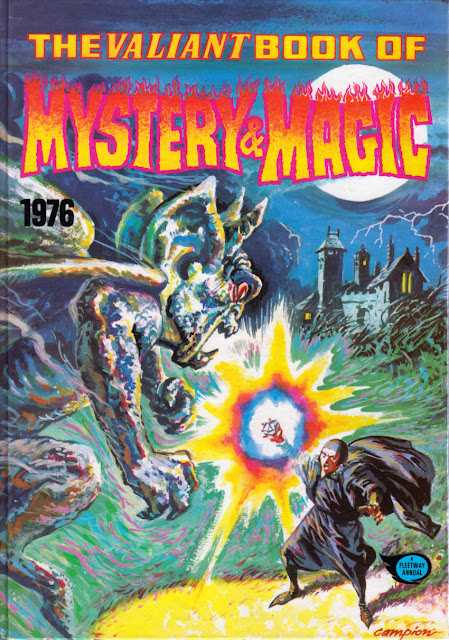 The 1970s saw a rising interest in fiction dealing with horror and the occult. The Exorcist and The Omen in the cinema for example, The Pan Book of Horror being a popular series of paperbacks, and the relaxation of the Comics Code allowing vampires, werewolves and other horrors in American comics that were reaching more UK newsagents than ever before. Teens, adults, (and kids if they could access it) enjoyed nothing better than a good scary story.

How could British comics join the fun? The Children and Young Persons (Harmful Publications) Act 1955 had forbidden the production of horror comics in the UK due to alleged effects on children, a kneejerk reaction to 1950s horror comic imports (see here). However, stories of the supernatural had continued to appear in British comics occasionally, although they tended to be very tame.

In 1975, IPC decided to publish a one-off hardback edition called The Valiant Book of Mystery and Magic. The closest thing they could get away with to a horror comic without being too graphic. Most of the stories featured The Spellbinder character; the old magician who had been the lead strip in Lion weekly. (By this time Lion had merged into Valiant.) However the book also contained several one-off mystery stories illustrated by IPC's top artists.

The book had 144 pages, mostly in black and white. The full colour lead strip, The Hand of Tuthoon, written by Frank Pepper and drawn by Fred Holmes, reintroduced readers to The Spellbinder, revealing how Tom Turville had awakened his ancestor Sylvester Turville from suspended animation. 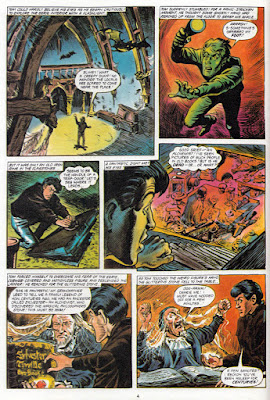 The book also included one of the Spellbinder serials from Lion, edited into a 33 page adventure. The rest of the book featured all-new material. Perhaps the most intriguing strip was The Final Victim, an early collaboration between Pat Mills and Joe Colquhoun several years before they created Charley's War for Battle. In The Final Victim, Colquhoun drew himself as 'Albert Weems', a comic artist down on his luck. Presumably the comic's managing editor 'J.J. Legrun' was based on IPC's Jack LeGrand. Here's the whole story... 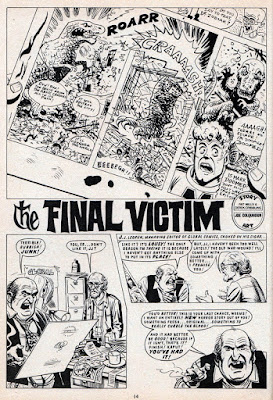 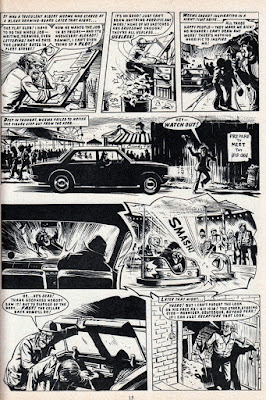 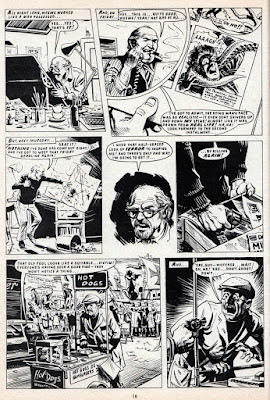 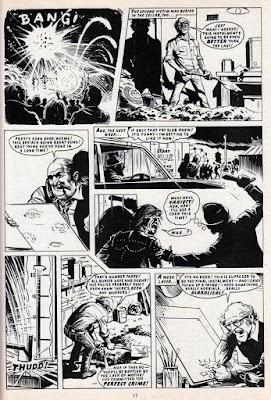 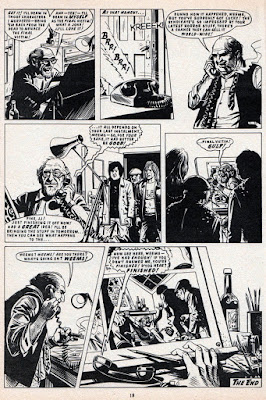 Joe Colquhoun also illustrated some other material in the book, including two text stories, The Red House and Nightmare and the short comic story The Man on the Road... 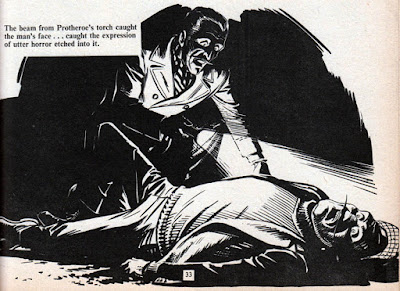 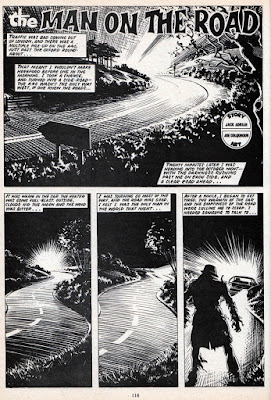 Other great talent in the book included Eric Bradbury... 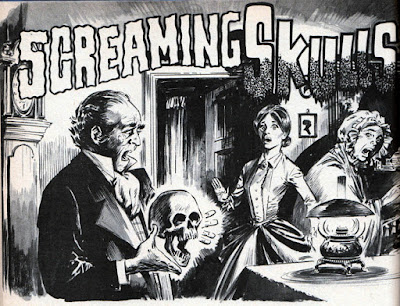 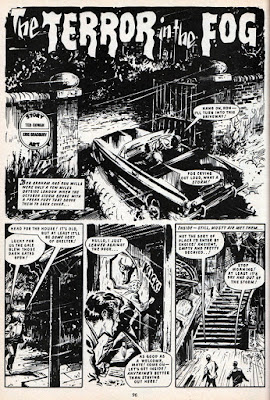 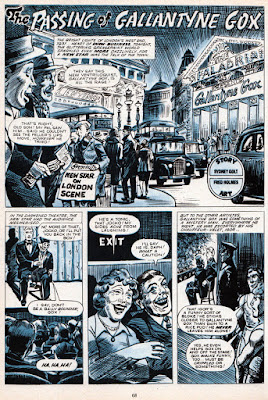 ...and of course Geoff Campion, the main Spellbinder artist who also contributed some art for text stories and the endpapers... 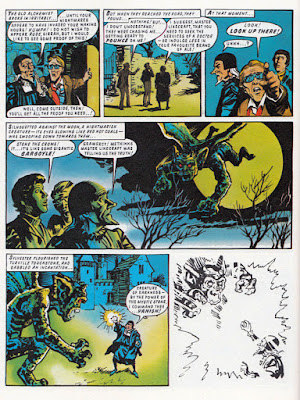 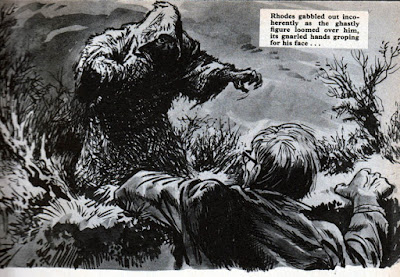 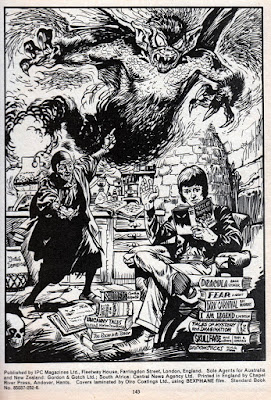 The Valiant Book of Mystery and Magic was a one-off, which suggests it either didn't sell very well or IPC decided to shy away from the subject. It's a fantastic book though, as you can see from the examples I've shown here. Well worth seeking out if you don't have a copy.

There's one hugely important thing about it that you may have noticed; the stories all carry writer/artist credit boxes. Hats off to the editor for doing this as it was definitely not usual IPC policy at the time, and wouldn't be seen again until 2000AD started publishing credits a couple of years later.
Posted by Lew Stringer at 00:01

I got this from a charity shop only a few months ago. Thought it a bit pricey, but turns out it was cheaper than the copies on eBay when I checked.
Still a bit unsure who did the long multi-part Spellbinder story as it doesn't seem to have credits on it.
I'd never heard of this before buying a copy, but very glad I did purchase it.

The long story is the reprint from Lion comic and was written by Frank Pepper and drawn by Geoff Campion.

Yes, I think it's the best 1970s annual IPC did by far. Pity they didn't do more. The Buster Book of Spooky Stories is also worth getting, although that has more reprint and humour stuff and is paperback. They did two of those.

That looks like a fantastic book, Lew. I'll have to keep my charity shop eyes peeled. Sometimes I wish I'd had far more appreciation of the wonderful UK comics right under my nose during the '70s rather than being swayed by the bright lights of Marvel so early. Well, at least now I get to discover a treasure trove of great art and stories.

If it had been published a year later I might have missed it too, as I stopped buying most British comics for a few years. Like you said, the lure of Marvel was strong. Good luck in finding a copy. It does turn up on eBay at various prices.

Thanks Lew, I had heard of this but presumed it was just reprints. Another to the wants list!

Over 100 of its pages are all new, so it's worth seeking out. Good luck!

I've got this book, but it's at my Mum's house (along with about 70% of my comics collection). I'd totally forgotten about "The Final Victim"! I remember pouring over this strip as a boy trying to figure out clues on how to be a cartoonist (without killing people, of course). Didn't work, obviously, but it's a great story -- and that last panel is fabulous. Thanks for reposting it, Lew!

Thanks Brad. I'd intended to blog about this book ages ago but it had slipped my mind, so glad you liked it.

It is my favourite British Annual of the '70s. What struck me recently was how good the text stories are. The text-only stories in a lot of those Annuals struck me then and now as cheap space-fillers, but the ones here are really good. NIGHTMARE and THE RED HOUSE are genuinely scary, and OF THEE SHE'LL SING is a very clever parody of M R James. You really have to wonder who this Annual was supposed to be aimed at, and it does feel at times as though everyone involved was simply determined to enjoy themselves, regardless of whether it sold.

I'm guessing they were trying to attract a slightly older reader, but I suspect the title 'Mystery and Magic' may have sounded too juvenile to some. An interesting experiment though!

My granny got me this as a Christmas gift - probably Christmas 1975 or 1976. Alas, I lost it somewhere in the intervening 40 years, but I remember it very well, as I must have read it hundreds of times.

As a kid, I used to have this book back in the 70's and kept it until the late 80s 9when I also ditched my other comic albums). When nostalgia kicked in a few years later (2004), I searched for it again on eBay.

Reading it again, I wonder why I got rid of it; the stories are well written and the artwork is very good. Definitely a keeper.

Unfortunately we all do stuff like that when we think we're too old for such comics. I put it up for sale myself in the late 1970s but had no takers (thankfully!).

This book is great, I remember pinching the story of thee she'll sing and wrote it in my English O level exam. The parts about horror films and Dracula helped me win a quiz at school. I couldn't remember the title of the book and searched my brain and Google until it came back to me. Have just spent £12 on eBay to obtain a good copy.

One of the biggest influences on my artwork.I always thought the American comics were crap to be honest and loved the British ones (I'm not British)
This is my favourite although I'm almost certain that Sylvester and Grimalkin (if memory serves) were in other comics that merged at a later date.I read this numerous times until the pages turned sepia and we moved house then it was gone.I transferred over to Vampirella, Eerie and Creepy back editions for my horror comic fix.They were out of this world standards.Amazing artists and stories.I'll never forget this annual/comic.