With the exception of Batman, it seems pretty hard going to make DC Comics characters work in the UK. Panini UK's Marvel titles mostly endure, but Titan have had a few casualties with their DC reprints. Now, even Titan's Harley Quinn comic is to end after just seven issues. (Full title, DC Comics Showcase: Harley Quinn.)

Despite being a very popular character with cosplayers and attendees of numerous UK comics conventions, it would appear than not many of them are actually buying Harley Quinn's British comic. Perhaps because they prefer the American original printings, or perhaps they're only interested in the merchandise and the movie version. Whatever the reason, Harley Quinn No.7, on sale 22nd June, will be the final issue. It will merge into another comic the following month, resulting in the lengthy title DC Legends: Suicide Squad Ft Harley Quinn (out on 27th July).

Meanwhile, here's a synopsis of Harley Quinn No.7, now billed as a kind of summer special...
How chaotic could a road trip be for Harley Quinn? In this special, Harley Quinn enters the weird world of a super hero fetish club! And presenting: the Harley Quinn Road Trip Special - Gotham's finest ladies take their hijinks to the road! 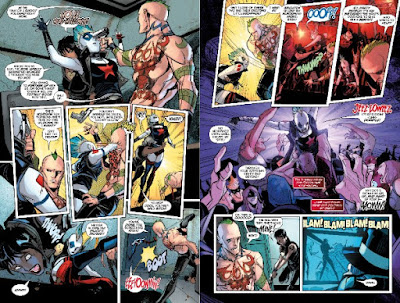 We don't often see these comics titles merge together like British comics used to when they died, so that's something...

I cancelled a longer comment about why Harley might not sell big on the British bottom shelf. The short version: she's nasty. On the other hand, so is Marvel's Deadpool, in most of the same ways - and he is in all the titles.

Marvel also is served as quite a coherent universe - I think the Terrigen Mists are happening everywhere - whereas in the DC stories you don't know if Superman is alive or dead or believed dead or who he's in a relationship with (because there's two of him, but not only that). If they even printed his death story, I missed it.

Robert, the terrigen mist storyline ended a couple of months ago in the IVX event. The Panini reprints won't get there for a few more months yet though, of course. Since they haven't been running the Inhuman titles, except for Ms. Marvel, it's likely that IVX will be confined to the Essential X-Men title.

The death of New 52 Superman should have been in the Batman Superman title, since that's where the Superman book is reprinted. But the Truth arc ended in Volume 2 issue 1 (which also included the first issue of the Rebirth book Trinity), and volume 2 issue 2's Superman starts his Rebirth storyline. Looks like they skipped it. Robert, you'll have to look for the trade paperback, which is called The Final Days of Superman and has a Road to Rebirth banner.

Sounds like a confusing mess for readers who follow the UK DC titles. I noticed Justice League No.1 in the shops the other day, but it features stories that continue from the DC Universe/Justice League comic. Definitely not a good jumping on point.

Panini UK have the benefit of their comics being printed in Italy, along with the other European Panini comics, so it probably works out cheaper than printing them in the UK and lowers overheads. How Brexit will affect that remains to be seen though.

There's got to be some "magic ingredient" that means Panini persists whilst Titan doesn't. Or maybe it's just simply down to character recognition. An ongoing Harley Quinn title was always going to be a tough sell.

Also, Panini appear to at least build an audience and have their finger on the pulse; Titan seem to just throw something out there, hoping it sticks. If Detective Chimp or Hawkgirl got a movie tomorrow, Titan would no doubt launch a CE in record time. Some of their characters are better served sharing a book.

DC has always seemed a hard sell in the UK. Back in the late 80s/90s, when LEM/Fleetway had the licence, we had a Superman title and a Batman title. Superman started off fortnightly, Batman started off monthly. Eventually, Superman shared space with Green Lantern and JLA (it remained pure, unadulterated Bats in the Batman title). They tried other titles: DC Action featured Teen Titans, Animal Man and a rotating strip whilst Zones explored the darker side of the DC Universe, i.e. Swamp Thing. I'm guessing both titles lasted fewer than about 8 issues. Heroes, which reprinted pre-Crisis stuff, also didn't last long despite reprinting vibrant characters such as the Legion of Super-Heroes, Blue Devil and The Brave and the Bold team-ups.

DC just can't seem to have ongoing success on these shores. There are things they could do that Panini do, i.e. be more avuncular, have fewer mistakes (i.e. printing errors), a relationship with readers via a letters page, etc. Really, though, I think they need to stop being impatient: don't just launch a title because there's a movie out. Likes of Green Arrow, Harley Quinn and Suicide Squad are best served as supporting slots.

Personally, I think Titan should streamline its DC range (I know they won't). Four titles might be better, a Superman title, a Batman title, a JLA title and a DC version of "Mighty World of Marvel". An MWOM-style DC title might work as they could rotate strips depending on what movies are out; so if they had such a title now, Wonder Woman could feature, but by year's end, they could focus on the likes of Aquaman.

Titan have form, and it's not just the DC books. The current issue of Doctor Who: Tales from the TARDIS completes the Eleventh Doctor's Year Two storyline. Tenth Doctor has two issues left of his and Twelfth has one, so you'd think those would be the content of the next issue, allowing Year Three to start for all three Doctors in the following issue. But nope, they're starting Eleventh Doctor Year Three next issue, and then the other Doctors in the next two. Ruining what should've been a good jumping on point! In fact, since the title switched from monthly to six issues a year (and not even bimonthly, they're irregular), I'm afraid I won't be surprised if that gets cancelled too, as they're only going to fall further and further behind the original floppies. Speaking of Doctor Who, Panini have announced in an email to subscribers that Doctor Who Adventures is "pausing publication" and subscribers will be getting Doctor Who Magazine instead - in other words, DWA has been cancelled.

Panini aren't totally innocent though. Issue 1 of the current volume of Astonishing Spider-Man wasn't a good jumping on point either, as it continued the Spider-Man and the X-Men mini started in the final issue of the previous volume. The same thing happened with Wolverine and Deadpool, the series getting a new volume when the Wolverine stories switched to X-23, while Deadpool only started his All-New All-Different series in issue 7.

I didn't know DWA was on hiatus, James. That's a great shame. Everyone put a lot of work into that to ensure it wasn't just another typical mag full of PR material. They really gave it their best shot. I suspected things were amiss when none of my local shops had increased their orders for the Panini relaunch. They just treated it as though the previous publishers were still running it and ordered low. Sometimes dealing with retailers is like knocking your head against a brick wall.

Good points, Stephen. A streamlined DC line from Titan might work better but, as you say, it's unlikely they'd try. They seem to want to put out as many comics as Panini, just to compete. It comes across as chaotic unfortunately.

It is chaotic. Less is more. And I think simply churning out a CE because there's a movie out is unwise. MWOM capitalize on movies by giving a slot to the most topical hero (so Dr. Strange whilst the movie is out, GOTG currently, etc).

In my opinion, the hard reality is that, unlike Marvel, the only DC characters who have a high profile/name recognition are Superman, Batman, possibly the Flash and Arrow. My late stepdad didn't follow comics, but he knew who they were (he'd heard of Flash). But I'd said Suicide Squad to him, he'd have been clueless.

Marvel, thanks to their cinematic universe over time, have many characters that resonate with people: Hulk, Spidey, Cap, Iron Man, Wolverine, etc. It'll be a long time, in my view, before DC catches up.

I agree, Stephen. It's been hard to make a success of DC characters in British comics for a long time. Even Superman fails these days. Batman hangs in there but even his comic is bimonthly now (not helped by some WH Smiths still not stocking it because of a cock up with their system).

Marvel have always been more successful with UK reprints. Strong characters, well produced reprint packages, and a friendly connection with their readership. It also helps that each Panini title carries a resumé of the stories so far. I'm at a loss why Titan don't do likewise with their comics. Who can remember the plot elements of a story from four to eight weeks ago without a reminder?

With Harley Quinn cancelled (I think, the Harley Quinn #8 is now printed in the latest issue of Titan Comic's Suicide Squad. But the worse thing is, with HQ occupying the 2nd slot of the SS comic, we won't be getting 2 parts of the JL vs SS storyline like the previous issue. Due to that, I won't be buying the SS comic anymore, sad to say, and just get the tpb or read it in the library.

With the new WW comic out, is there any reason why Titan still insist on continuing to reprint the New 52 WW series inside Titan's JL comic? They could remove that and put in 2 issues of New 52's Justice League so Darkseid War can finish a bit sooner. That's another comic I gave up a while ago and read the Darkseid War tpb via library.