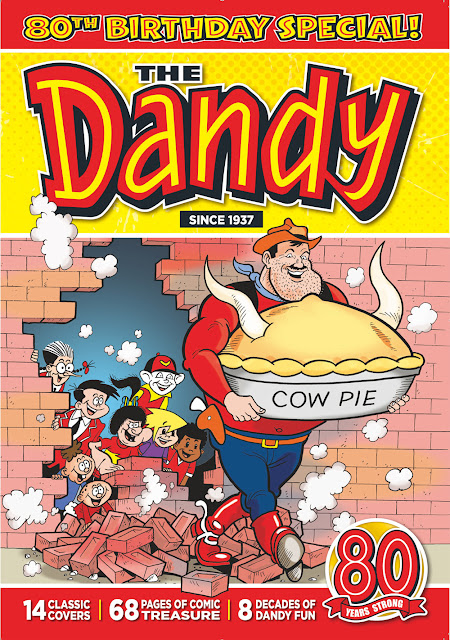 Summer Specials for both The Dandy and The Beano will be in the shops soon, but you can pre-order them separately or as a pack from the DC Thomson Shop right now:
https://www.dcthomsonshop.co.uk/our-brands/dandy/the-dandy-80th-birthday-special.html 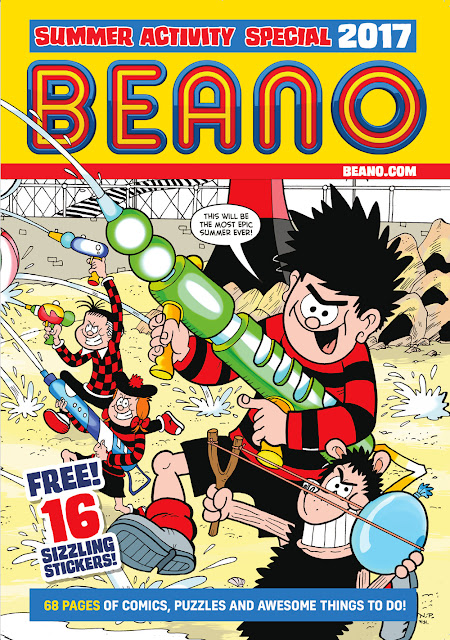 As in recent years, the Summer Specials are in the 68 page card-cover softback format, rather than the 32 page glossy tabloid size of years ago. This makes sense, as regular comics are glossy these days so a similar-looking Special just wouldn't look very... special.

The Dandy special features reprints taken from over the course of the comic's run, to celebrate the fact that 2017 marks the 80th anniversary since The Dandy first appeared.

Keep a look out for them both in WH Smith and selected shops around 14th June, or order them from the link above.
Posted by Lew Stringer at 12:52

Thank, Lew. Am looking forward to it.

Nice touch using the yellow box, because that Dandy logo was originally encased in one back in the 80s. Strange that Korky isn't on the cover though. It mentions 14 covers, so I imagine at least half of those would be Korky strips.

Still puzzled why DCT uses a different logo in the special compared to the annual. Particularly since the '80' design is similar to the annual's logo.

No idea, but years ago the specials and annuals had logos designed specifically for each year, with no concerns about brand definition so hopefully it won't make any difference to sales.

I remember, Lew and I used to like them. Just intrigued why The Dandy would have one logo for the annual and another for the special. Maybe it denotes between new work and reprints?

Anyway, who really cares? It certainly won't affect sales and as long as they are being produced so we can buy them... :D

I don't know, Sid. This summer special logo is actually a digitally redrawn one of the original so they've gone to some trouble over it. Perhaps they felt it had more impact than the previous one.

Personally, my favourite Dandy logo is still the 1960s one, but that's only because I grew up with it. It looks very dated now.

That said, I really like this "new" retro logo. It really stands out and still looks modern.

I think that both logos were redrawn?

It is amazing how things do influence you as a child. I started reading The Dandy when it had the 60s logo but my favourite is the one used for the annual. Not that I don't like the one used by the special (which is only an updated version of the annual's anyway).

Obviously DCT have been thinking about it as they do seem to switch between the two logo designs for the special.