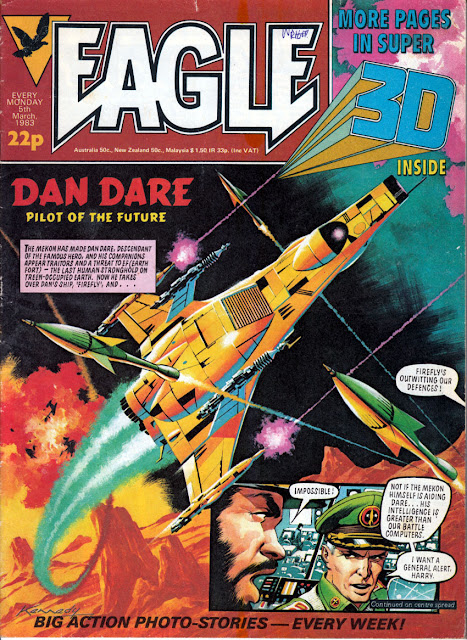 During the 1980s Ian Kennedy had a stint as the artist of Dan Dare for the revived Eagle comic, replacing Gerry Embleton. The comic had been relaunched in 1982 and presumably its initial use of photo covers hadn't proven too successful because in 1983 the new Eagle underwent a few tweaks. As well as new strips debuting, it also meant that the Dan Dare strip featured on the cover, just as it had with the original Eagle in 1950. 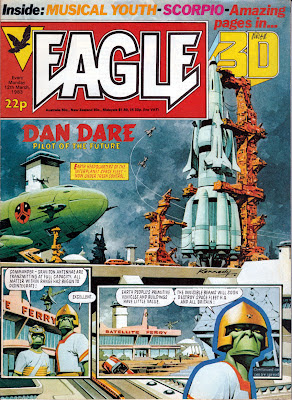 I always liked the idea of comic strips on the covers of comics, mainly because it showed that the publication wasn't trying to hide the fact that it was a comic. However I understand the reason publishers used them was the theory that if casual readers were hooked by a cover strip, and picked it up to read, they'd be more likely to purchase the comic. (Sadly it probably doesn't work in this day and age of covers being swamped by free gifts.) 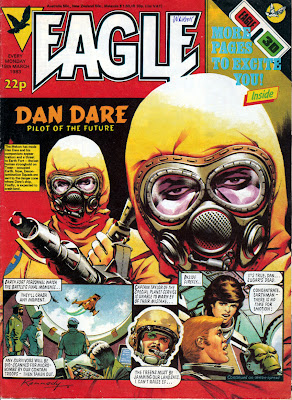 Ian Kennedy produced some excellent covers for Eagle during this period. His skill at illustrating aircraft and suchlike had been known due to his work on various boys comics, but Dan Dare allowed his imagination to expand, rather than being confined to accurate depictions of existing hardware. One can only guess at what fantastic pages he could have illustrated for TV21 had he been on the team back then. Anyway, here's a few of his Eagle covers from 1983 for you to savour. (The scripts for these strips were by Pat Mills.) 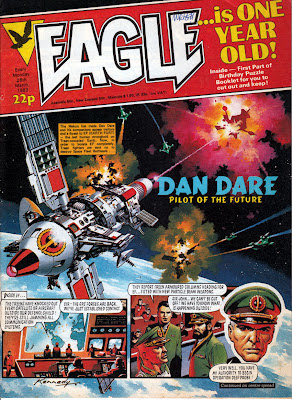 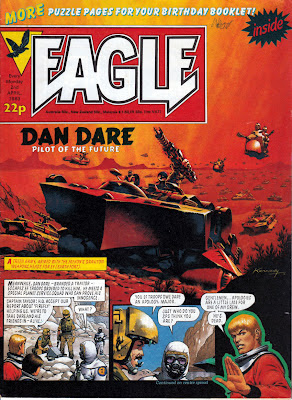 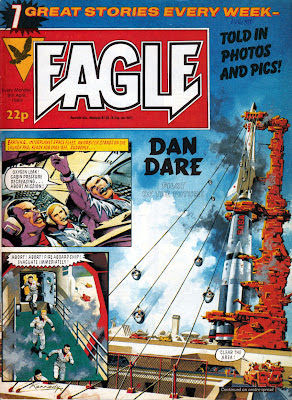 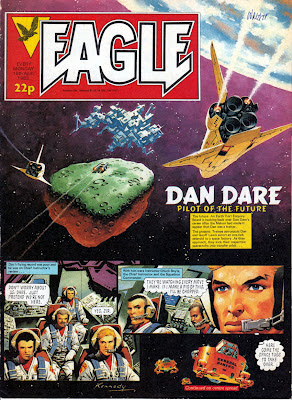 Those are some absolutely beautiful covers. My local sweetshop didn't get Eagle in so I never knew at the time what I was missing. These stories really need to be reprinted so we can seem them in their full glory.

Your article reminded me of something I did get though, the Dan Dare annual 1979 was the first that I can recall being given. I didn't know at the time that the artist was Ian Kennedy, all I knew was that it was mindblowing. I lost that annual at some point over the years but managed to get another copy on Ebay for a few quid quite recently. The Dan Dare story is from the 2000ad version of Dare with the Space Fort and all that. There's no writing credit but Kennedy did manage to get his signature on there and it wasn't whited out by the editor.

Quite apart from his impeccable pencilling and inking is his his skill as a colourist, its on a par with anything thats coming out these days. His art positively glows and vibrates with energy!

And locusmortiis - I just went and checked through that Dan Dare annual after you mentioned it - another lovely bit of IK artwork for sure :-)

I have very fond memories of Ian Kennedy and his Dan Dare in Eagle Mk II - he just always seem to hit the mark.

When I was getting into boys' (rather than humour) comics, it was at the time of those epic DD stories in 1984 and 1985, with Oliver Frey, Ian Kennedy and then Carlos Cruz all adding their mark on the lightning bolt-eyebrowed one.

And whilst his full colour cover artwork and especially anything hardware-related was always of the highest quality, I also really loved Ian Kennedy's line artwork on things like 'Morgan's Mob' in The Crunch, and his various strips over the years for Warlord and The Victor.

Sure, his crispness was perhaps unfashionable, especially in the years when 'grimier' artists were coming through, but the high quality control really helped drive the story-telling forward.

Blush-cheeked plug... I have just started a comics blog and posted on the very topic of the 1980s Eagle:

You've set the bar high with Blimey! though... Always a joy to read through.

By the way, have you seen Pat Mills' new blog?

I absolutely loved the Ian Kennedy illustrated Dan Dare in Eagle. I was probably about 9 years old when I first got it. Briefly in 1983 I stopped getting Eagle comic so I could get the Return of the Jedi comic - a big mistake!

I'm 39 now and an illustrator/Designer and I would say this had a huge influence on me becoming one!

Great memories. I believe I still have my comics somewhere!

I was also heavily influenced and inspired by Ian's art as a kid. His style has had a lasting influence on me. Is there any way one could contact him to say "thank you" -- even if it is via conventional postage?

Had the honour of of meeting Ian at this year's Dundee Comics Day last weekend during which he was interviewed about his career. What a modest and talented Gentleman. Conus you may wish to forward an appropriate message of appreciation via the editor of the commando comic (google commando mag) as is doing regular work for them.

I used to get Eagle when I was a kid in the 80s. Ian Kennedy's work was a masterpiece. I should still have all my old Eagle comics at my dads house somewhere and looking through all those covers sent me back to the early eighties. That was a brilliant story that covered nearly two years I seem to remember. Valdon, Maj. Dimitry Prodvok (?), that taxi droid thing called Tam, a killer 'air shark'...wow, great stuff.
Kennedy's artwork was sooooo good, original and beautifully coloured. His ship designs....well, I have never seen anything like those since - Firefly (where did you get that idea Mr Joss Whedon?), those space interceptors, the big heavy cruisers......MARVELLOUS. He really did have a cinematic eye for angles and detail.
I would love to see a full reprint of the original story. I would also love to see some of those front covers as posters too.
Mr Kennedy, I salute you sir and thank you for those great days in the early 80s. You are a legend and magician.

I am the very proud daughter of Ian Kennedy and feel very privileged to be one of his greatest fans. I've read all the posts and have made a point of letting Dad see how he is admired. He is such a shy quiet man that he gets quite overwhelmed, as he just thinks he's doing a job like anyone else. Myself and the family thank you for all your kind posts.

It's really nice to hear from you Gillian and thank you for writing. Yes, your Dad's work is very much admired and respected by his readers and his fellow professionals. Myself and others are looking forward to meeting him on April 18th at the Birmingham Comics Festival. I'm sure he'll be made very welcome.

I'll echo what others have said. I probably first encountered his artwork in the pages of the relaunched Eagle, though later saw earlier work he had done for 2000AD and Starlord. Very happy to read that his influence and effect have been passed to him.