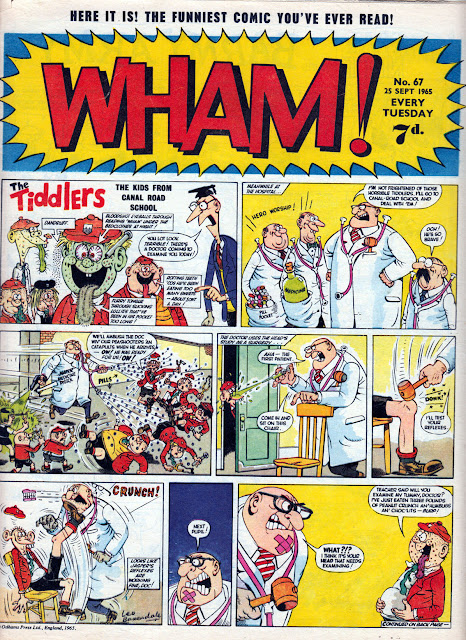 There's nothing better than a bit of Wham! to brighten up that Monday morning feeling. (The 1960s comic that is, not the 1980s pop combo.) Here's a few pages from issue No.67 that was published on September 20th 1965.

The cover is a smashing Tiddlers strip by Leo Baxendale. The strip often featured fill-in artists but not this week. Here's the continuation, on the back cover... 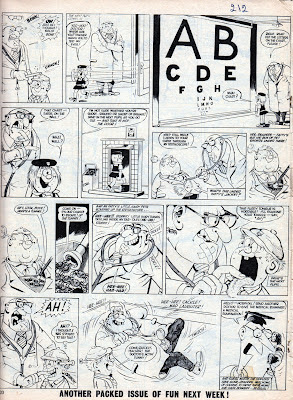 Yes, like several comics of the time, only the front cover was in full colour. And we didn't mind a bit. (Besides, TV was in black and white back then as well.) Inside, one of the many un-named Baxendale-copyists drew that week's Wacks strip. It's not exactly the height of comic art but it shows the anti-authoritarian attitude that Wham! often indulged in. (Which we as readers loved of course.) 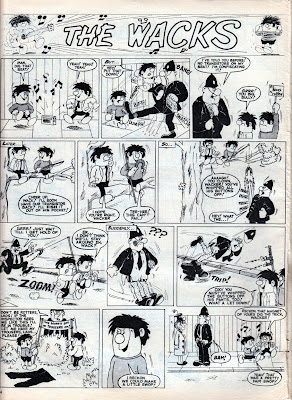 Note the jokes page (Lucky Dip), and see how simple and clear the layout is. No cluttered design using half a dozen Photoshop effects. Just plain and straightforward. Admittedly this approach may be considered boring by today's standards, but I find it easy on the eyes myself. You'll see there's also an ad for a new Odhams nursery comic, Story Time (which had actually launched two weeks earlier). It would run for 87 weeks before merging into Robin... 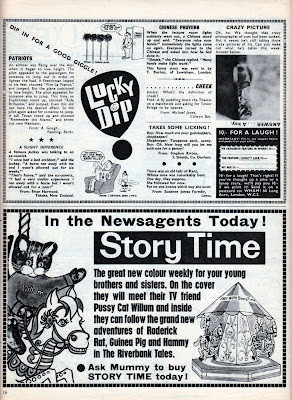 Ken Reid produced some excellent pages of Frankie Stein for Wham, with these early ones embellished with a grey wash (diluted black ink). The script (possibly by Ken Mennell?) isn't one of the best, but Ken Reid does a great job with it... 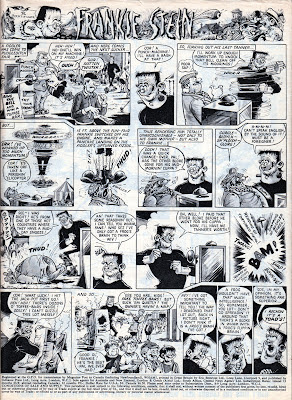 Wham! - Even after all these years it's still one of the funniest UK humour comics ever produced.
Posted by Lew Stringer at 08:00

I could be wrong Lew, but I thought Ken Reid wrote all his own scripts at Odhams. I think he said in an interview that he was only persuaded to relinquish this role during the IPC regime when it was suggested that certain writers were short of work!

Great to see that cover btw - especially as it's from an issue I don't own. There might not have been any colour on the inside pages by that stage but I've always felt that the 'Wham!' cover logo - invariably coloured blue, yellow and red was - made it one of the most attractive of all British comics.

That's another of Leo's 'updates' of Beano work! If you have 'A Very Funny Business' you can see the original Bash Street Kids story.

Well spotted, Nigel. I thought it seemed too familiar. Ah well, at least he'd added a few new gags and panels for the update on this occasion.

@Phil, I'm sure I read in one of the 'News from the Floor of 64' features that a scriptwriter wrote Frankie, but I could well be mistaken. I might be thinking of IPC, where Ken Reid worked from other people's scripts.

Thanks for uploading that Frankie Stein page, Lew. I've just spent a good ten minutes staring at it. Every time I see a new Reid page I get lost in the panels. Excellent.

I really wish you could buy collections of his work...I know - rights issues etc. but it doesn't stop me hoping... one day...

By the way Phil, I agree with you regarding the Wham! logo. Very eye-catching and a great use of primary colours. That's one thing I liked about 1960s comics; the simplicity and clarity of the mastheads that really made them stand out.

Comics are very much of their time of course, and the more ornate mastheads of 1930s comics suited the period perfectly, but by the 1960s a more direct, less fussy design style was in fashion and that Wham! logo was perfect for the time. I'm assuming that it was inspired by Roy Lichtenstein's 'Whaam!' painting of 1963, itself based on a DC war comics panel from 1962.

Phil, Lew, in regards to Frankie Stein scripts, I have a piece of original artwork for the episode for WHAM No. 56 and there is the following inscription in pencil at the top of the page: (script by Odham’s – mucked-aba’ht-a-bit by Reid).

Ken was certainly paid for both script and art in my handful of file copies of Wham! and Smash!

I've just had a look at Alan Clark's interview with him in Golden Fun no.14 and came up with these two quotes.

"Taking the broad concept from Alf's idea, I visually created the character and wrote all the scripts as well as pencilling and inking all the pages. More than anything else I really enjoyed all the monstrous supporting characters; I'd never let myself go in quite that way before. For the first time on a comic set, I had a completely free hand and it was wonderful!"

Alan Clark - "How long did you write, as well as draw, Faceache?"

Reid - "For almost all of the 1970s. I stopped when Jackpot merged with Buster a couple of years ago and, because the script-writers had lost a lot of their work, I was asked to move over and let them have a go. I still do the drawing for Buster of course, but all the scripts are now sent to me by IPC."

...apart from showing what a sweet-natured, accommodating chap Ken must have been it seems to me that these two quotes also say a lot about the different editorial philosophies of Odhams and IPC!

Thanks Phil. I have that interview so I must have forgotten that bit. Must dig through my Odhams comics though when I have time because I'm sure a writer was credited with the Frankie scripts in one issue. Perhaps I'm thinking of Dare-A-Day-Davy.

Lew I remember writer Walter Thornburn being credited as the scripter in a "Dare a Day Davy" strip along with a drawing of him (the same strip Ken Reid drew himself)maybe that's what you were thinking about? - McScotty

Lew, I have a question in regards to the Tiddlers. In the early issues, the Canal Road kids had Super Sir, but within a year, Super Sir was replaced by a new teacher. How did the change take place.

I think the change happened when The Tiddlers moved to the cover (replacing Biff) but I have a gap around that time so I don't know if it was explained or not, sorry.

Aha. :) Klakadak-Ploobadoof has answered the question for me:

Fascinating stuff - especially Imantas' lovely inscription! Going back to the interview there's a suggestion that Ken must have experienced a bit of a 'wobble' during his second year on Frankie Stein, similar to the full-scale breakdown he suffered while drawing Jonah for DC Thomson (of course this could just refer to the catastrophic sinking of his canal boat: shades of Jonah indeed!):

"I personally didn't draw him (Frankie) for very long. Because of various personal troubles I had at the time, I couldn't keep up the supply."

Whatever these 'personal troubles' might have been they would certainly explain why Odhams might have needed to help him out by supplying a few scripts - as well as the later fill-in episodes that were drawn in his style by other artists.

Naughty Mr. Baxendale used a Little Plum story two weeks earlier in Wham! number 65 and transposed it onto General Nitt and his Barmy Army. The Plum strip is reproduced on page 73 of A Very Funny Business.
The pressure must have been terrific. A few weeks earlier Eagle Eye was reduced to a one page filler.

I think we can forgive him considering his massive influence on British comics and his brilliantly funny output. :)