Remember, remember the 30th of September... because this Sunday sees the launch of an all-new anthology comic, Aces Weekly, - and you won't even have to leave the house to buy it!

Aces Weekly is a brand new comic that is exclusively online, not in paper form, not requiring trudging around newsagents, not needing to wait for the postman to deliver it. It's a comic that you subscribe to and that you can access from your computer, - all for a very reasonable price. 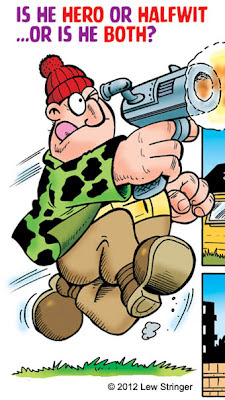 And, as revealed on this blog back in May, issue 1 includes an all-new Combat Colin three-pager in full colour. Yes, the buffoon in a bobble hat is back!

Here's all the info from the official press release...

David Lloyd (V for Vendetta, Kickback) empowered the world
with his iconoclastic Guy Fawkes mask in V for Vendetta. Today, comic
conspirator Lloyd is changing the world with his publishing launch of an ambitious new online magazine called Aces Weekly.

Aces Weekly is a sequential art magazine, available exclusively through on-line subscription which will be released as seven weekly issues which form a volume. Each issue will have 3 landscape pages from 6 teams of contributors, plus many pages of extras such as artists sketches etc. Readers subscribe to volumes which cost £6.99/$9.99 per seven issue volume.

Aces Weekly will be available exclusively on-line and feature all-new material.
Stored online, readers have access to their magazine wherever they have
web access. The website goes live September 30, 2012.

What makes Aces Weekly special? The creators have more control then ever before. Lloyd explained the origin of the magazine, “The aim was to create something very much like a traditional weekly comic but without limiting the subject matter. We asked a range of creators who we knew to be excellent - the reason for the ' aces ' of our name - to do whatever they liked within certain bounds of taste, and they just came up with a great mix of stories. Creators in this business rarely get asked to do whatever they like, so that's part of the pull of the project for them. And they're enthused by the newness of the project and its potential for growth.”

Visit www.acesweekly.co.uk to see the best that comics have to offer!

Obviously we're all hoping this project is going to succeed. Vested interest aside, it sounds like an exciting new comic and I'm eagerly looking forward to seeing what my fellow "Aces" have produced. (And very pleased that Oink's Psycho Gran is returning in an upcoming issue!) I really hope comic enthusiasts (and people new to comics) will support this because with the problems with distribution and retail in the UK the digital format is definitely one way forward. Aces Weekly is all-comic, no filler, no pandering to TV/toy brands, and definitely not bagged with a plastic toy!
Posted by Lew Stringer at 23:25