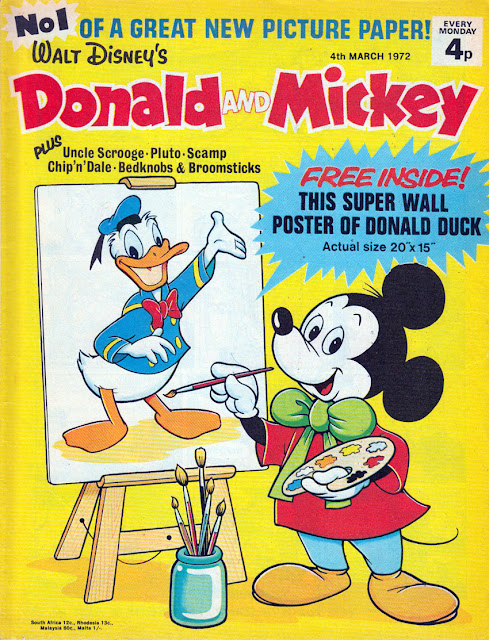 IPC Magazines had an equal amount of hits and misses when they set out to dominate the UK comics market in the 1970s. One of the successes was Donald and Mickey, a 24 page weekly based around the famous Walt Disney characters. 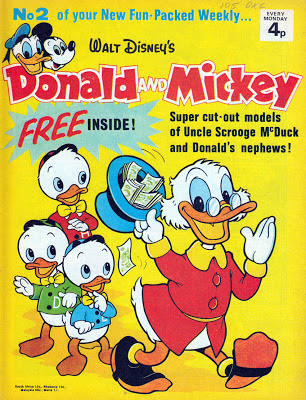 The characters were no strangers to British comics of course, with Mickey Mouse Weekly (1936 to 1957) having the most longevity. Therefore IPC decided that a new generation might be receptive to a Disney comic and in late February 1972 Donald and Mickey No.1 was launched. (With a catchy/annoying theme song in the TV ads if I recall correctly.) 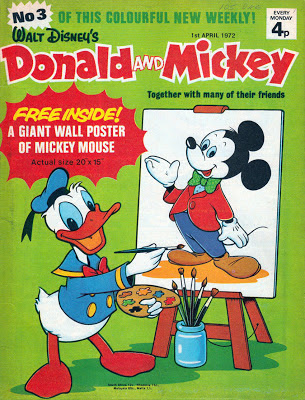 Issue 1 was dated 4th March 1972, but issue 2 carried no cover date, and No.3 arrived with a 1st April date. I can only assume a few weeks were skipped due to industrial action, - something that plagued IPC on occasion throughout the Seventies. (UPDATE: The delay must have been due to the numerous power cuts of the period. Thanks to Jeremy Briggs for pointing me towards this post on Steve Holland's blog: http://bearalley.blogspot.com/2007/04/seven-days-week-epilogue.html. I'd forgotten all about those power cuts of early 1972 but I now recall doing homework by candlelight! Here's an archive news item from the time, from The Guardian: http://www.guardian.co.uk/theguardian/1972/feb/16/fromthearchive ) 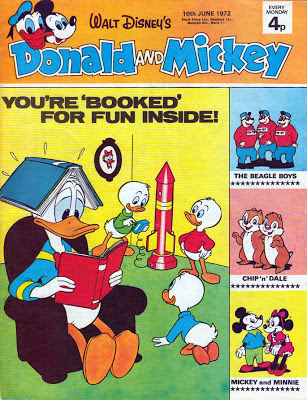 Unusually for a British comic of the time, every page was in colour. 16 in full colour, and 8 with blue ink on salmon-pink paper. This in itself gave the comic a feeling of vitality. The contents were mainly reprints from the American Disney titles produced by Gold Key comics, but the artwork on some covers and editorial pages were often new, - illustrated by Colin Wyatt, a superb artist with a clean style. 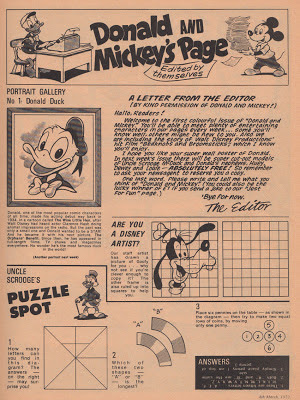 The full colour pages were given to the main Disney characters as one would expect. As I mentioned, these strips were reprints from American comics such as Walt Disney's Comics and Stories with the panels edited and reformatted to fit more on a page. Sometimes titles would be changed completely, such as The Monster and The Money Tree from Uncle Scrooge No.83 (1969) becoming The Money Leak. Dialogue in the stories was also tweaked and re-lettered to give it a more British slant. 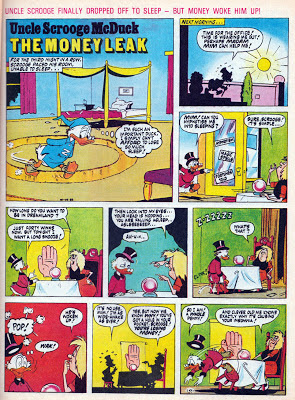 I don't know if the most famous artist of Donald Duck comics, Carl Barks, had any work reprinted in Donald and Mickey but I assume he must have at some stage. However the early issues feature strips from various other artists such as Kay Wright and Tony Strobl.


As was usual with many UK humour comics of the time, Donald and Mickey also carried a couple of adventure strips for balance. These were brand new stories, drawn specially for the weekly. They'd often feature adaptations of Disney movies, kicking off with Bedknobs and Broomsticks, Disney's big movie of 1972. 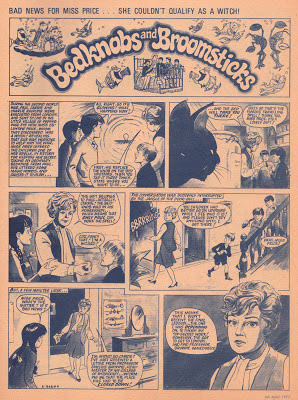 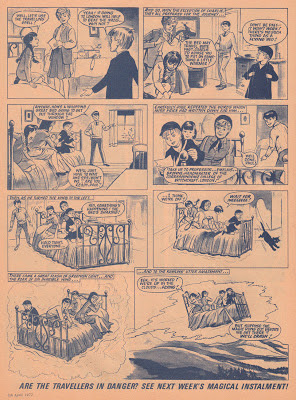 The other adventure strip in the early issues was Captain Nemo, using characters and designs inspired by Disney's 1954 movie adaptation of Jules Verne's classic 20,000 Leagues Under the Sea. Artwork by Sam Fair... 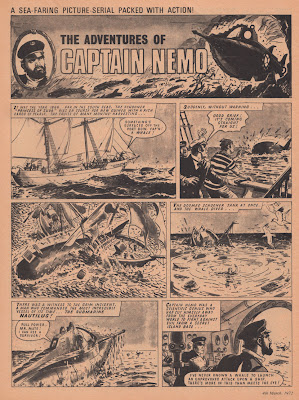 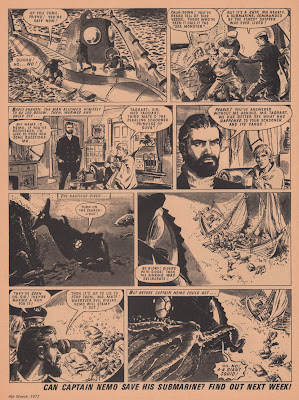 However, perhaps Nemo didn't prove too popular, or perhaps IPC simply wanted to keep the contents from getting static, because a few months later the strip was replaced by Robin Hood, again with art by Sam Fair... 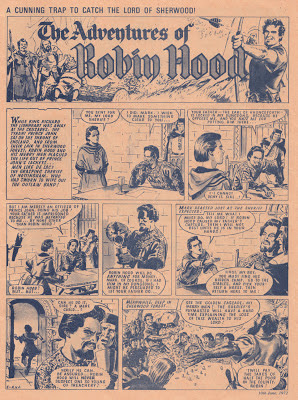 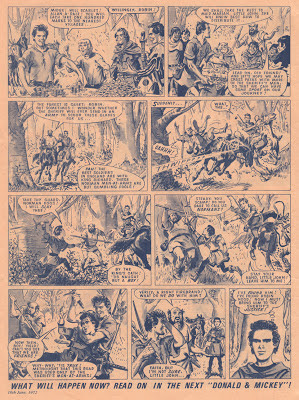 The popularity of Donald and Mickey led to IPC producing a companion comic, Goofy, in October 1973. However, this comic flopped after just 29 weeks, merging into its stablemate. Donald and Mickey continued until 6th September 1975 when it switched billing to Mickey and Donald for seven issues, preparing for its relaunch as Mickey Mouse No.1 dated 25th October 1975. However, just to confuse matters, IPC also launched Donald Duck in his own title a month earlier (27th September 1975). 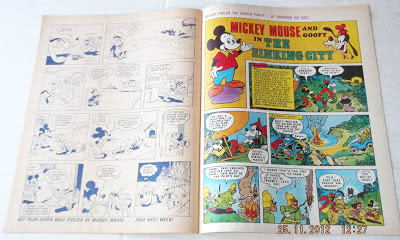 Donald didn't fare too well on his own and his comic merged into Mickey Mouse with the 31st January 1976 issue. Mickey prospered for a few years, but as interest in traditional Disney characters waned, the comic was relaunched as Mickey Magazine in December 1980. It lasted just 17 issues, ending with the 28th March 1981 issue. A year later, London Editions gained the Disney license, launching Disney Magazine in February 1982.

These days, Disney is represented in the UK with magazines such as Disney Club Penguin. Sadly the traditional comic strip adventures of Donald Duck and Mickey Mouse don't seem to appeal to modern British kids. Yet, a short hop over to Norway reveals that Donald Duck is still that country's most popular comic. (A few years ago, sales were a million a month, - astounding for a country with a population of just four million!) It's curious how tastes can differ between countries.
Posted by Lew Stringer at 14:05

very interesting. I must say, I'm a fairly big fan of the Film 'Bedknobs and Broomsticks'. I was pretty let down with the special edition that restored about an hours worth of removed stuff mostly cause the 'expert voice actors'.. weren't.. I could probebly name three of four Voice actors that could have restored them missing lines and KEPT the same voice.. the Disney Expert ones? they give characters Accents that the original actor/character didn't have..

Anyway.. enough on that.. I must say, while it's very cut down and all, That strip isn't too bad.. I wouldn't automatically say the art looks like the actors BUT it's dead on for the Characters. I can clearly tell who each character is and that's one thing often missed with strips based on live action roles.. well.. Look-in had alot of good art but it mostly looked Photo traced more.. making an interesting style..

Wow! That brings back sooo many memories!! My brother had almost every comic in the series and I read them all several times over (I was 6 when they started.) I must ask if he still has them, I think I'd appreciate them more now than I did then!

Yes, D&M was a good comic. At 13 I was well over the target age when it was launched but I'd never seen Disney comics before and their style appealed to me. I think I read it for about a year before I gave up.

I sold them all years ago but managed to acquire these early issues very cheaply on eBay a few months ago.

For those who 've never heard about it, there exists a global index of Disney publications at this site: http://coa.inducks.org . The UK comics section is not completely catalogued, so someone with a Disney collection could help index the British editions.

The UK section can be found here: http://coa.inducks.org/country.php?c=uk

Looking at the site you linked to, Ramirez, I have to say it's a shame that IPC edited some of the Disney strips so severely. It made the pace of the stories too compacted in some cases.

it's possible that, despite the cover, date D&M issue 1 didn't appear at the end of February 1972 given this "advert" from another IPC title.

Thanks Jeremy! Ah yes, there were a lot of power cuts around that time. (I remember doing homework by candlelight.) That must have caused the delay then. The pages for issue 1 would have been sitting at the printers in a queue I guess.

Ah, thanks Lew - I've long wondered why D&M became M&D. I loved this comic as a kid, especially Super-Goof and The Beagle Boys. And lovely as the original adventure strips were, they just didn't seem to fit the comic.

Yeah, I'm not sure how long the adventure strips were included. They were an awkward fit, especially as they were written in such a traditional British comic style.

I'm astounded at how many different adaptations (or spin-offs) of "20,000 LEAGUES UNDER THE SEA" there've been. Fellow fan Luke Blanchard steered me to your blog, as well as a similar article at the Bear Alley blog.

Well, guess what! Thanks to another Google search, and someone whose Blogger I.D. is "MAWH" (and his "Light Under A Bushel" blog), I now have the entire 1st 12-page IPC "CAPTAIN NEMO" story about "Steelbeard The Pirate" cleaned up and posted at MY blog! Enjoy!!