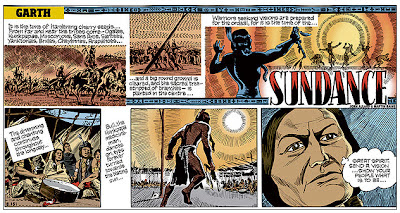 Today's edition of the Daily Mirror begins reprinting Sundance, the last Garth story to feature the artwork of John Allard and which will soon lead to Frank Bellamy's first work on the strip.

Sundance originally appeared in the Daily Mirror in 1971 and has been reprinted in a few places since but has been coloured by Martin Baines for this latest appearance. John Allard originally started out on the strip as an assistant to Garth's creator Steve Dowling, but took over the art duties completely in 1968 until a suitable replacement could be found. (Source: the excellent Frank Bellamy Checklist Blog which you can visit here).

Frank Bellamy debuted on Garth with episode 13 of Sundance. Two of the original strips are being reprinted each day, which means that Frank Bellamy's first Garth strips will appear next Tuesday (November 13th). For now though, enjoy John Allard's version.

Personally I always preferred the Steve Dowling and John Allard versions of Garth as those atmospheric strips were the ones I read as a boy. I'm hoping that the Mirror will delve into its archives and reprint some of the 1960s strips at some stage so that more people can appreciate that era of the character. Probably a slim hope, as Bellamy's version has always been a fan favourite, but you never know.

I loved Bellamy's Garth, and also had a soft spot for Martin Asbury who took over after his death.
Having said that I'll take any reprints of Garth I can lay my hands on no matter who the artist.
Would love to see the entire 16,000 strip run reprinted from the start - well I can dream can't I? :-)

In a perfect world it'd be viable for them to reprint loads of classic newspaper strips. It'd be great to see half a dozen of them serialized in a weekly comic for example. But unlikely to happen in the UK, sadly.

Thanks for the mention of two projects i have worked on and nice to see Garth still being mentioned. I would love to see the Dowling strips reprinted as well. When you look at the Garths bigger on the monitor you can really see the additions that John Allard added to FB's work earlier on in his era. Its also interesting that some frames look to me completely drawn by Allard in later stories such the Wolfman of Ausensee. Have a look at strip F.133 frames one as an example.

Interesting. Do you work from any scans of original artwork Martin or from files the Mirror already has?

They are from files that the mirror has supplied. They are usually the same size as the artwork originally drawn and scanned at 600dpi.