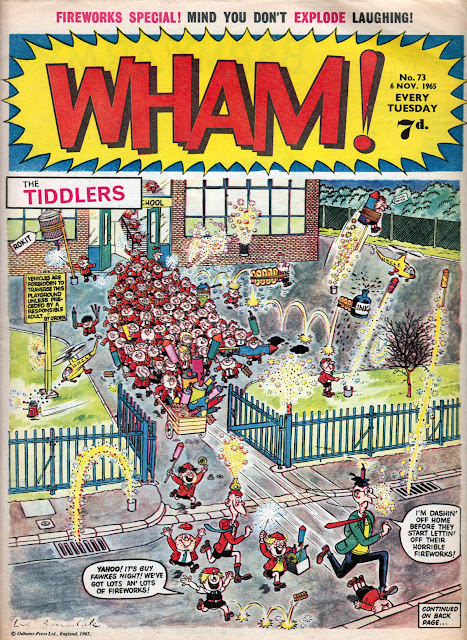 This was the cover of Wham! No.73, which was in the shops this very day in 1965, - and what a great issue it was. Billed as a 'Fireworks Special' the cover was filled with a giant single panel (instead of the usual comic strip design) with artwork by the unbeatable Leo Baxendale.

Some collectors often get confused with Leo's style, attributing his work to that of his many imitators. In the case of his Odhams work it's fairly simple; Leo signed most of his pages. If a page of Wham! or Smash! doesn't carry his signature, chances are he didn't draw it. And as you can see, Leo's signature wasn't exactly hidden. As for those who claim that Leo drew strips for Pow! - forget it. He didn't draw a thing for that comic.

It appears that Leo was so pleased with the freedom to sign his pages that he signed the back page too! Just look at the wildness of this firework strip. It's extremely doubtful fireworks could be shown with such lack of responsibility in a comic today. 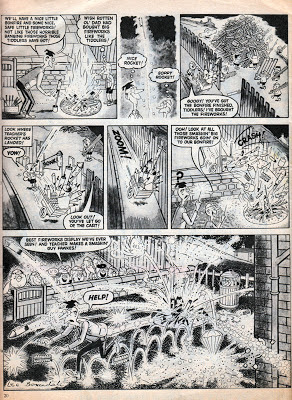 Inside, the bonfire night child endangerment continued, with The Wacks breaking several laws in the space of 15 panels. It's the dog I feel sorry for. Artwork by Gordon Hogg. 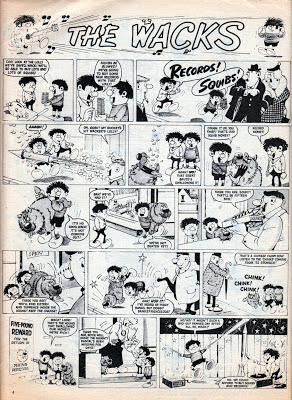 Ken Reid was producing incredible work in the 1960s, with this Frankie Stein page being a prime example. Ken delighted in putting his characters through outrageous scenes of comedy violence. This week's special theme gave him the chance to have Professor Cube incinerated by a rocket and then plunge into a box of fireworks. 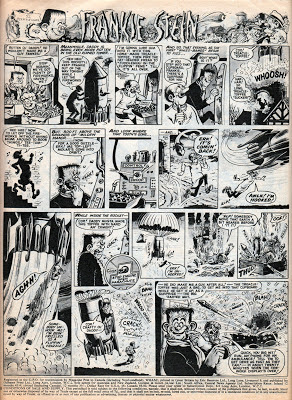 Danny Dare was far lighter fare, with this week's episode drawn by Artie Jackson I think. 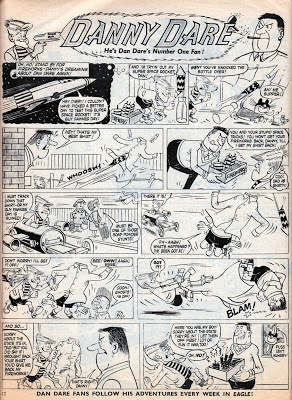 Biff was also drawn by Artie Jackson this week, with the fighting-obsessed lad settling scores with the use of fireworks. I see the kid named Killer Jones gets a tooth knocked out. He probably deserved it. You don't get a nickname like that for nothing. 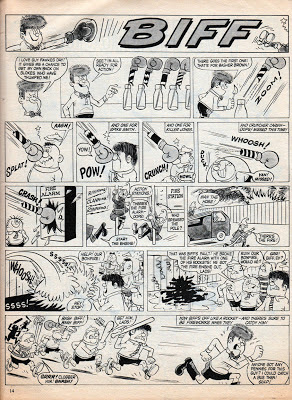 The reckless use of fireworks concluded with Georgie's Germs. I think this one was drawn by Brian Lewis but I'm not 100% sure. (He did draw several episodes of the strip but Odhams tended to change artists around a bit.) 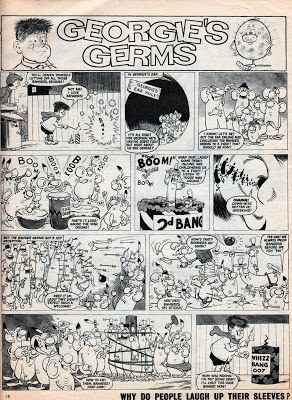 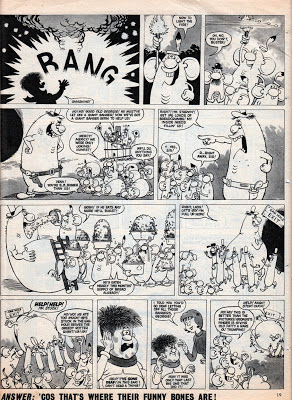 Looking back, it's amazing what Wham! could get away with regarding the use of fireworks in strips. The cover of this issue itself would be enough to see it removed from the shelves today. Yet at the time I'm sure we all saw it for what it was; a bit of fun that was so exaggerated it defied imitation. These were truly golden days for British comics and I'm glad I was fortunate enough to be a child in that era.
Posted by Lew Stringer at 23:36

An amazing cover from Leo there!

I wish these comics were still allowed - mind you - the fireworks issue of The dandy last year wasn't that bad, with fireworks attaeched to Postman Prat's van - its not exactly safe!

Every year we have a fireworks deisplay just up the road, and its only kids who run it" (nobody older than 16 ever turns up)!

Lovely to see this old Wham featured. I have a great collection of this comic , ..the first two years or so were really the super Beano of the time, with Baxendale leaving the Bash Street Kids behind to create new strips. The quality of printing and colouring in those early issues was very evident too.As a twelve/ thirteen year old in those days , there was no political correctness and the use of fireworks was a true enough reflection of their use by us kids on the street who spent our pocket money on easily obtainable penny bangers. These are different times now!

I can't say I'm sorry to see the practice of kids in real life throwing bangers about become a thing of the past. It's something I never indulged in myself. Funny in comics, not so funny in reality.

Have to admit it does feel uncomfortable looking at it today..

As black humour its great...
maybe kids had more adult tastes then..mind you The Simpsons do show this on Itchy and Scratchy..and The Beano's version...so black humour is around today in comics and cartoons..

Kids have always enjoyed comedy violence, and they know the difference between fiction and reality. The over-cautious attitude in comics came in when IPC took over and put paid to Odhams' excesses for good.

The problem is, I think, that some adults forget what it was like to be children. They might read that Frankie Stein story and see it as a monster enjoying watching his Dad burn, which of course sounds horrific. But as kids, all we saw was the funny slapstick humour of the situation, knowing the characters were not real.

"Funny in comics, not so funny in reality"... yeah, doesn't just apply to sparkers, unfortunately this week's Dandy fell prey to that. In "My Dad's a Doofus", the Dad got electrocuted after a damaged electrical cable got wet in a puddle. In New York, someone died after getting electrocuted due to a downed power line in a puddle after Hurricane Sandy, so that joke fell flat with me. Very poor timing.