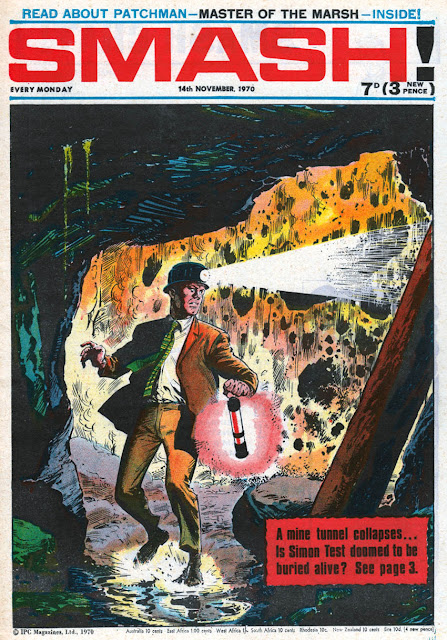 1970 wasn't a good year for IPC Magazines. Industrial action by printers had caused some of their comics to skip occasional weeks in the summer and worse was to come. This issue of Smash! dated November 14th 1970 would be the last one published that year. The strikes also affected Buster, Lion, Valiant, and some of the girls' comics. They would not return to shelves until the issues dated 6th February 1971. The strike had a devastating effect on sales and probably hastened the end of Smash! as it merged into Valiant in April 1971.

As readers, we were unaware at the time that this week in 1970 would see so many favourite comics go on an enforced three month hiatus.

This issue of Smash! once again featured a dynamic cover by Eric Bradbury, illustrating a scene from the Simon Test story inside. Annoyingly, these scenes were usually of the cliffhanger itself, so we had to wait a week to see them resolved... or three months in this case.

Simon Test and the Curse of the Conqueror was the opening strip inside, again with artwork from Eric Bradbury. 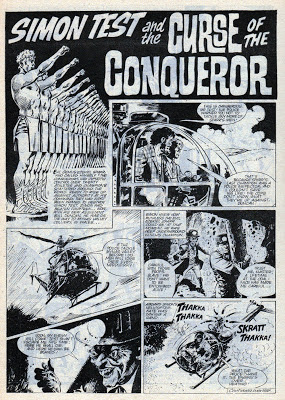 Master of the Marsh had been running in Smash! since the comic's revamp in 1969. Artwork by Solano Lopez. 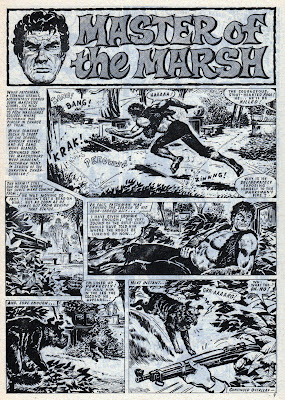 Erik the Viking was a renamed reprint of the 1960s strip Karl the Viking, which had originally appeared in Lion. Great artwork by Don Lawrence. (Deluxe hardback collections of Karl the Viking strips can be bought online by clicking this link.) 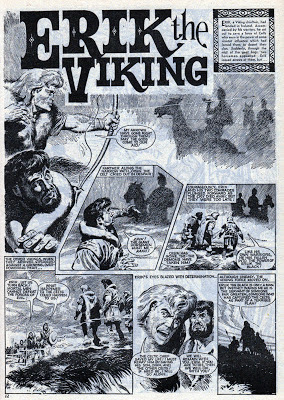 The centre pages of Smash! was the home of The Swots and the Blots. Truly funny stuff by Leo Baxendale. Many collectors believe that Leo had always illustrated this strip but that's incorrect. He only became the artist when IPC took over the comic in 1969, - but his run on the strip is a real highlight of British comics. 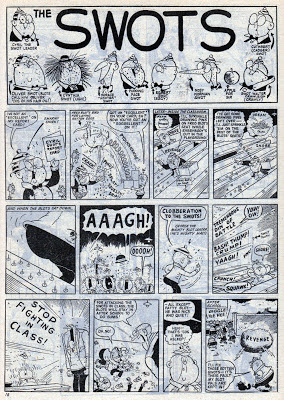 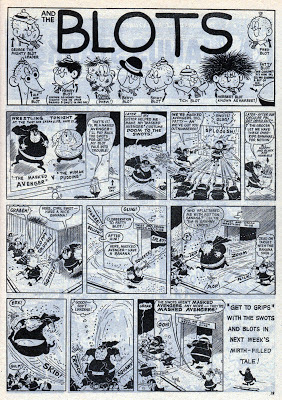 A favourite strip by many, The Incredible Adventures of Janus Stark was another that had joined the comic with its revamp. The dark, moody artwork of Solano Lopez was perfect for the grittiness and squalor of the strip's Victorian-era setting. He was excellent at giving his characters a distinctive look. The urchins are wretched, the Governor is weak, and the schoolmaster looks genuinely malicious. Lopez paints such a grim world of shadows and dirt that no one would wish to live there but it makes for compelling comics. Striding through it all is Janus Stark, like a cross between Oscar Wilde and an East End hard case. 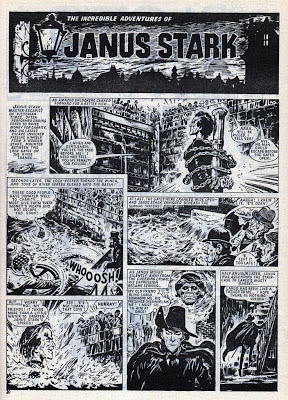 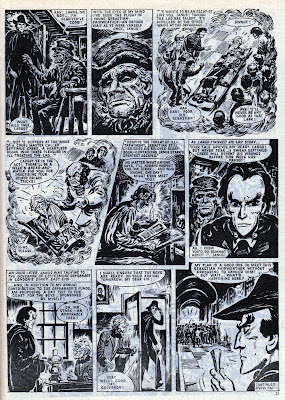 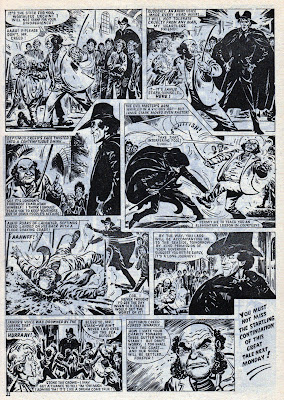 Smash! had been the home of several superheroes during its run, from the Hulk reprints in the 1960s, to the home-grown adventures of Tri-Man in 1969. By 1970, another one graced its pages, albeit a rather daft one called Birdman of Baratoga. "By my feathers!" 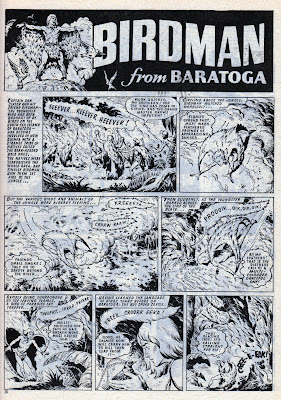 Another Leo Baxendale strip, Sam's Spook, rounded off the comic. Reproduction wasn't too good on this page for some reason but here it is anyway... 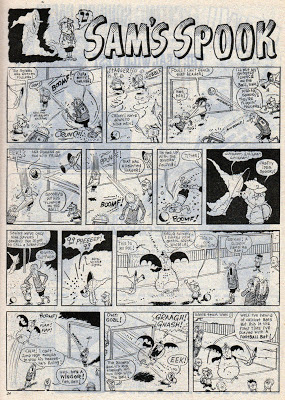 Finally, a request for readers to "Order a regular copy today!" - not knowing that there wouldn't be another issue that year. So, sadly, no Christmas issue for 1970 but here's the closest thing; an ad for some of the Christmas games produced by Spears for that era... 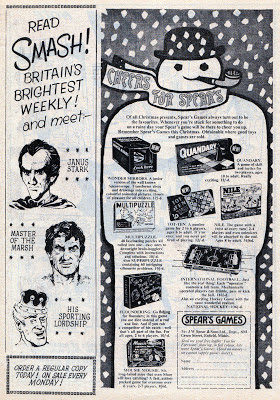 When the comics did resume in February they picked up right from where they left off (as artwork would have already been produced before the strike hit). I'm sure that many, like me, were happy to see the comics return, but no doubt others had given up by then.
Posted by Lew Stringer at 01:34

I like Leo Baxendale's writing style in Sam's Spook. I've seen that used a lot, often to make it look like its the kids themselves who are writing!

Thx for this LEw. I can see that unlike his earlier efforts in Smash, Leo did not sign these strips. Do you think that was related to the changeover from Oldhams to IPC?

Still a very strong comic so as you say a great shame the strike and really messed it up and ended soon after...

I like this period of Smash!
also they are cheaper to buy;0)

I've no doubt the strikers felt they had good reason for industrial action but it's a shame it had a knock on effect for freelance artists losing work.

@Andy, Yes definitely. When IPC combined the Odhams and Fleetway divisions it was effectively Fleetway who dominated, and their policy had always been not to allow (most) artists to sign their pages. That said, Leo was allowed to sign his Bad Time Bedtime Storybook pull-outs in Monster Fun a few years later.

I do recall the frustrations growing up of industrial action on comics - haunting particularly IPC in the late 70s. As you say, the unfortunate byproduct may have been not only artists losing work but readers dropping titles. Can still remember that long summer when the only thing I could get in a newsagent seemed to be Victor (a comic I never particularly liked). Not a happy time...

You're right. It was April 1971. I had quickly referenced the Denis Gifford catalogue for the Valiant listing and must have looked at the wrong line.

Thanks for the correction. I'll amend it.

This brings back the memories! I mostly read these strips in various annuals my elder brothers had received - Janus Stark was always a favourite! I find that putting a sheet of black paper behind the page I'm scanning can help to cut down on the print from the reverse shining through

However, newly launched `Thunder` comic ran from Oct 70 to March 71 and i'm sure that was IPC owned too. Can you update or correct me on this please Lew?

Thunder used a different printers, Alan, as did Whizzer and Chips, Tiger, Cor!!, and some other comics so it wasn't affected by that strike.

Ah! That's why they wern't affected. Thank you Lew- solved that puzzle!