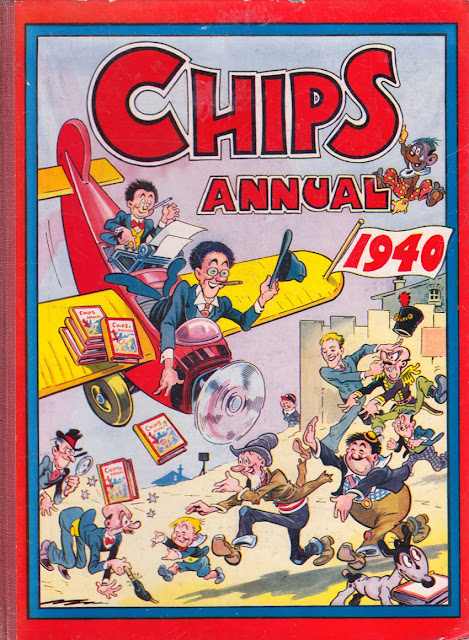 Long before the two-in-one weekly Whizzer and Chips was launched in 1969 the title Chips had a long run (1890 to 1953) as a stand-alone comic with no relation to its revived namesake. There were also a handful of Chips Annuals published too. The book shown here was published in September 1939 - the same month that World War 2 broke out. Hopefully it proved to be an amusing distraction from the horrors that were soon to come. Typically of comics of the time, it contained no credits but the cover artwork seems to me to be the work of either Albert Pease or George Parlett. It shows the Chips editor, 'Corny Chips' (Richard Newton Chance), bestowing copies of the Chips Annual amongst the comic's various characters.

This Chips Annual 1940 had 92 pages (plus covers) but you'd be forgiven for thinking it contained far more from its depth. That's because the paper stock was so thick each page had the consistency of thin card.

Like other annuals from the publishers Amalgamated Press, the contents were a nice variety of humour and adventure strips and prose stories. Most pages were in black and white although a few were in spot colour (red) and five were in full colour. The book opened with this nicely painted frontispiece by Walter Bell flanked by an editorial introduction by 'Corny Chips'. 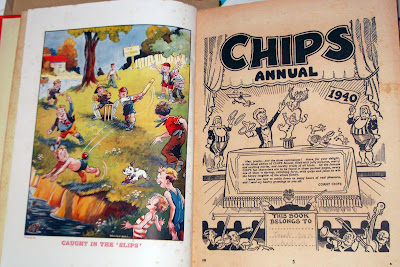 Amongst the prose stories was this two pager which combined strips and prose. Billy's Burglar uses the old formula of down-on-his-luck hero receiving a feast as a reward - "given a whole turkey to do as he liked with". Curious that the ending tells us that poor Billy was given a warm bed over Christmas - but after that he was back on the streets presumably. That's the life of the homeless in comic-land! 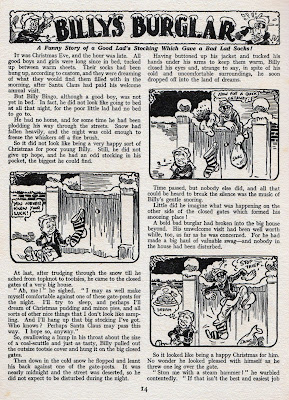 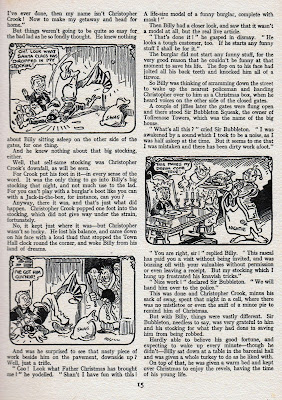 Recognising the increasing popularity of science fiction stories, the annual gave its only full colour section to a breezy SF story titled Into the Unknown. Definitely more fiction than science, but nicely illustrated by Reg Perrott, one of the best comic illustrators of his generation. Typical of the times, it's interesting to see the old British explorer attitudes at work even in space, where the invaders just take what they want, regardless of whether the crystal is important to the well-being of the natives of the planet or not. 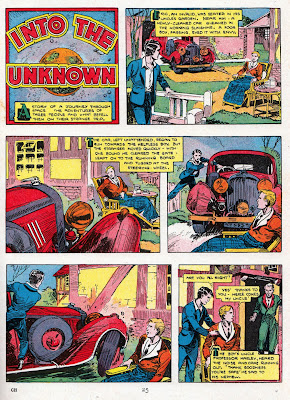 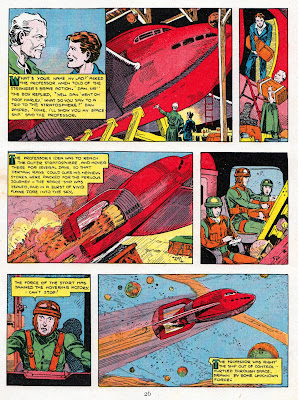 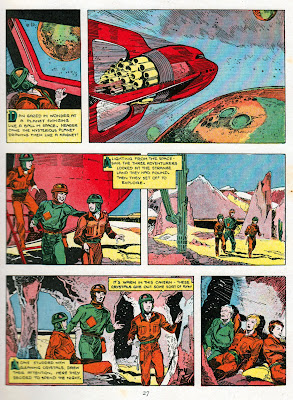 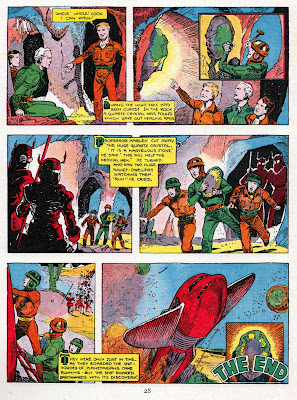 Chip's long-running favourites Weary Willie and Tired Tim also featured in a four page story, although as there seems to be a natural break at the end of page two I suspect it might be a reprint from two old issues of the comic. Artwork by Percy Cocking. 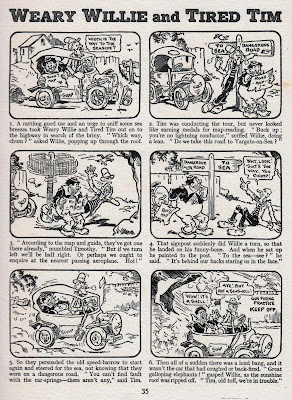 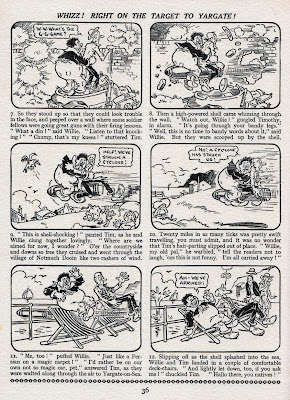 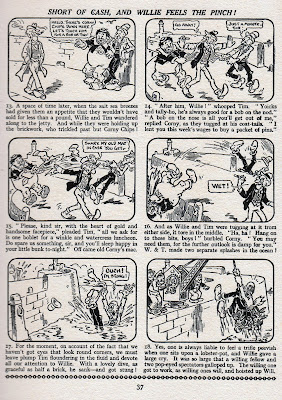 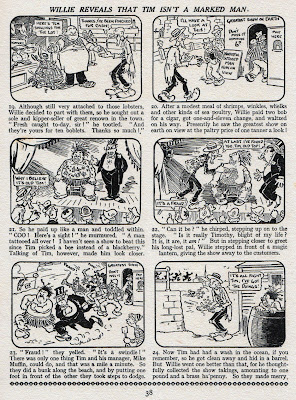 No Chips Annual would be complete without Casey Court, and this book gave us two superb Christmas offerings by Albert Pease. 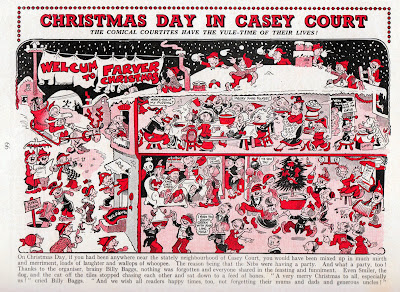 Ivor Klue was another page drawn by Albert Pease I believe, as was Laurie and Trailer... 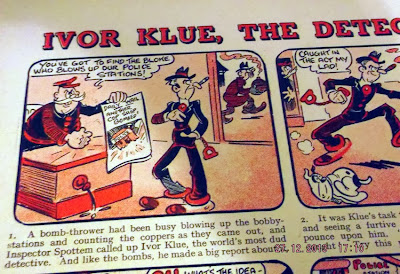 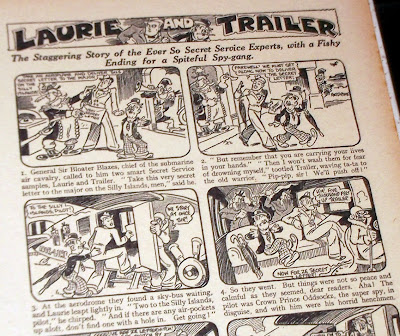 Long before Black Bob, Dane the Dog Detective was another highly-intelligent canine getting into regular adventures and thwarting crooks. This text story ran for many years in the weekly. 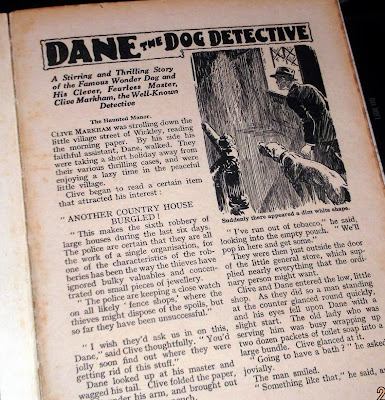 The final page in the annual featured an advert for the weekly comic. Always a wise move to bring in new readers who may have only discovered Chips by having the book as a Christmas present. 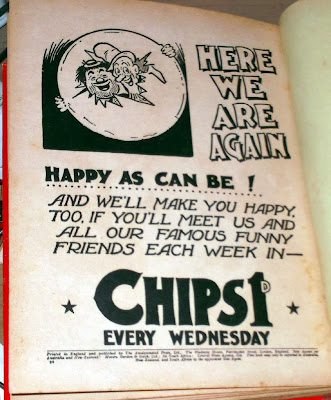 The back cover of the Chips Annual featured a paid ad... for Atora suet! "how good it is for kiddies who won't eat fat in the ordinary way". How times and nutrition advice have changed! 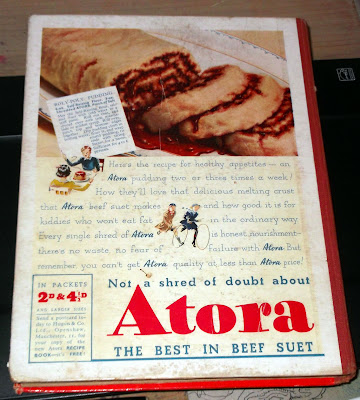 -Those Casey courts are just brilliant!!!

They certainly are - especially on the better paper stock of the annual where every line is sharp.

I bought this annual on eBay recently. It only cost a tenner. No one else bothered to bid on it for some reason!