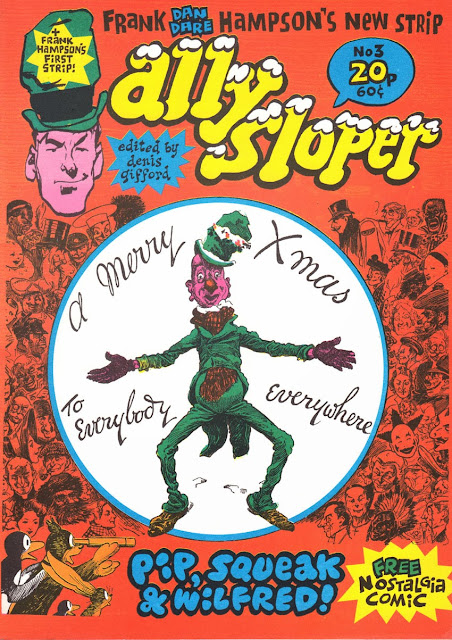 Ally Sloper was the first recurring character in British comics, having originated in the paper Judy in 1876 before moving onto his own very popular title Ally Sloper's Half Holiday in 1884. That publication ceased in 1914 (due to the war perhaps) and was revived for 23 weeks in 1922. Another (quite poor) revival in 1949 only lasted one issue.

Then, in 1976, cartoonist, writer, and comics historian Denis Gifford attempted another revival with his ambitious Ally Sloper magazine co-published by Alan Class. The original Sloper paper had 8 tabloid pages, but Denis' new comic had 32 pages plus a card cover and full colour on the outside covers. Priced at 20p it was considerably more expensive than other British comics, and considerably slimmer than any imported American comic at that price (such as Eerie or Monsters Unleashed for example). Unsurprisingly, it only lasted for four issues.

However, the third issue was the Christmas edition so I thought I'd show some pages from it here today. (As always click on the images to see them larger.) Veteran comic artist Walter Bell had been commissioned by Denis to produce a new Ally Sloper image on page three of every issue and the 83 year old didn't disappoint. You'll notice caricatures of several politicians of the day, including Harold Wilson, Enoch Powell, and Dennis Healey. 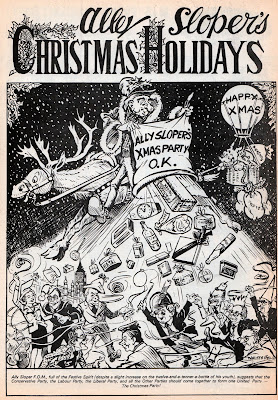 Denis managed to attract quite a bit of talent to produce pages for Ally Sloper, including the legendary Frank Hampson. Here's the first (and sadly only) appearance of Frank's new creation Dawn O'Dare... 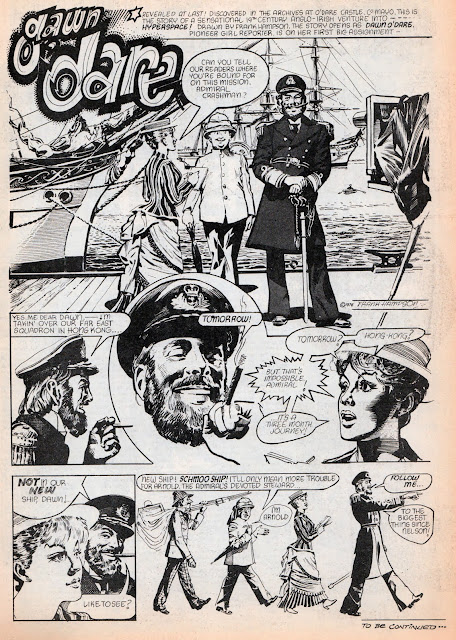 The next legend to appear in the comic was Leo Baxendale, firstly in an interview conducted by Denis... 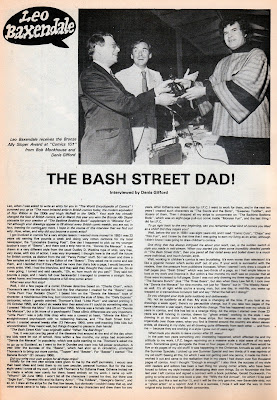 ...and then producing a new page for the comic... 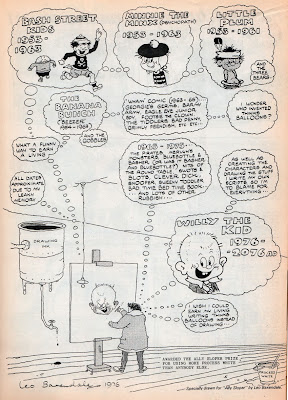 Ready for another giant in the industry? How's about Raymond Briggs, with this one off Father Christmas story for adults... 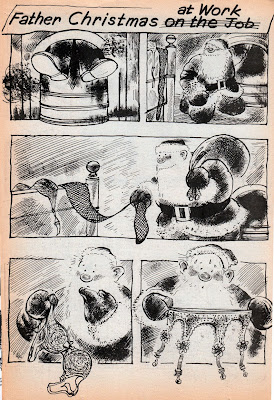 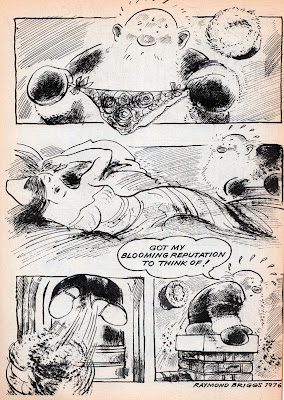 The middle 8 pages of this Ally Sloper series always featured a pull out 'Nostalgicomic' of classic material. In this issue it was the old Daily Mirror strip Pip and Squeak and the cover was taken from a 1921 newspaper supplement... 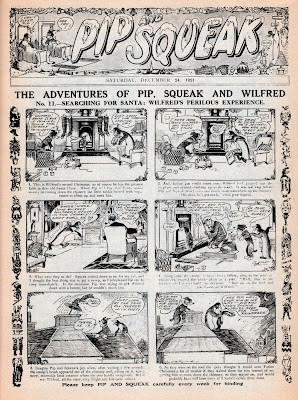 Artist Ray Aspden did his page as a mock up of a classic UK comic cover, and a very nice job he did too. Philpot Bottles Orfis Boys Own revived the old Chips feature character, deliberate bad spelling and all. 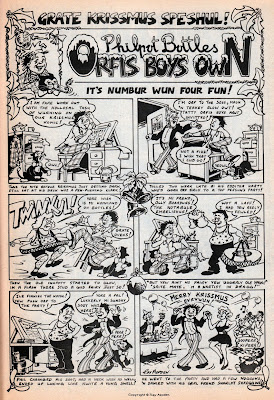 Cartoonist Ed McHenry, who produced a lot of work for various IPC comics including Oink!, had a regular strip in Ally Sloper about a hairdresser-come-superhero Kaptain Kween... 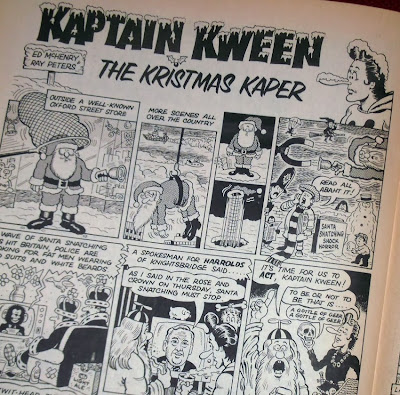 Bob Dewar, another artist known for his work in children's comics, gave us Copout and Mumble, with gags that, whilst not intentionally offensive, would definitely be considered non-PC today... 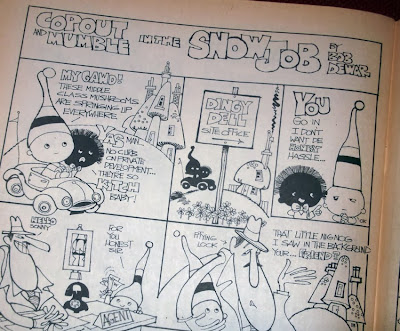 The back page featured another Leo Baxendale illustration, advertising his Willy the Kid book. Excellent stuff. 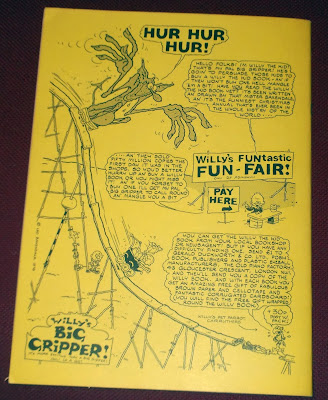 The 1976 version of Ally Sloper was a brave attempt at producing a variety comic for the adult British market, and it was sold in newsagents as well as comic shops, but despite containing some quality material there unfortunately wasn't enough support for it.
Posted by Lew Stringer at 20:09

not bad work. reminds me of something I'm sure I said before.. If everyone that wants comics just like the ones when they were in there prime went out and brought the 'retro' comics, they wouldn't go out of business as much as they do.

Interesting publication, I've never seen it before. The first page by Leo Baxendale that you have shown was then included in the second Willy the Kid book, only with the autograph and the caption “specially drawn for Ally Sloper“ removed.

Ah yes, I thought it had been used somewhere else. Thanks.

The mag had an eclectic mixture of content really, which may have put a lot of people off. I liked it though.

I had read of this, but I always presumed it was reprints of earlier material. I will track it down, very interesting especially Dawn O'Dare.

They turn up on eBay sometimes. I bought them back in '76 when they came out. Contents vary in quality but there's some gems in there. It was all new stuff apart from the middle 8 pages which reprinted old UK newspaper strips.

I think a comic like that could have worked, but the name Ally Sloper meant nothing in 1976. The only people who'd remember him would be historians and people in their seventies. Still, an interesting attempt anyway.

Ally Sloper had the feel of a fanzine at the time. The title was a bit old fashioned admittedly but production standards were high. Crikey magazine would have been the most recent equivalent.They were both good efforts at trying to convince the general public that comics could appeal to all ages.A labour of love for the fans in the end, if a little safe compared to some of the then current european fare.

Yes, it definitely felt more 'small press' than mainstream, and that may have been another factor that put off the general public. Pity.

Interesting that Alan Class was co-publisher. Quite a departure from his usual Creepy Worlds type of reprint comics.

Good thing Leo included that approximate dates disclaimer, as he actually stopped doing BSK and Minnie in 1962, not 1963!

To be fair, it isn't always easy to remember exact details after you've been drawing strips every day for many years. A lot of artists don't even keep copies of the comics they've been published in. Don't know if Leo did or not. (Me, I've got at least one copy of everything I've done, but they're taking up a lot of space.)