The Casey Court of 71 years ago 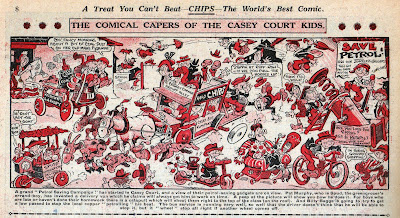 Presented here for no other reason than it's a cracking piece of comic artwork, here's the Casey Court illustration that appeared on the top half of the back page of Chips this very week in 1942. Drawn by Albert Pease I believe. Click on the image to see the detail.

And if you want to see the one for the following issue, along with other examples from the same comic, I blogged about it a couple of years ago. See here for the link:
http://lewstringer.blogspot.co.uk/2011/12/christmas-comics-chips-1942.html
Posted by Lew Stringer at 13:17

They are great period pieces...love seeing technology slowly coming into Casey's court...
One of the first busy picture weekly specials..I jst love this type of work...
Must of inspired so many artists including Leo Baxendale..

Lew, according to the late great Denis Gifford, the Casey Court vaudeville act toured the music halls of Britain from 1905,with Will Murray as Mrs.Casey.
The 1906 tour had a young Charlie Chaplin as Billy Baggs. So I think we can safely assume that the Casey Court comic strip was the inspiration for the music hall act.

It's really good to be able to read your blog again - it was much missed. All the best for the coming year.

Thanks Dave. Also, Chaplin allegedly once said that Weary Willie and Tired Tim were an inspiration for his world-famous tramp character.

My mother who was born in 1914, but died some years ago used to dance for Casey's Court unail her mid twenties, I still have the photographs of the chorus line, a day she often spoke of the laughing policeman.

Mrs Casey sent my grandmother a letter explaining my father had broken his leg so could not perform ,would love to know more but sadly my father dead now can anyone help please