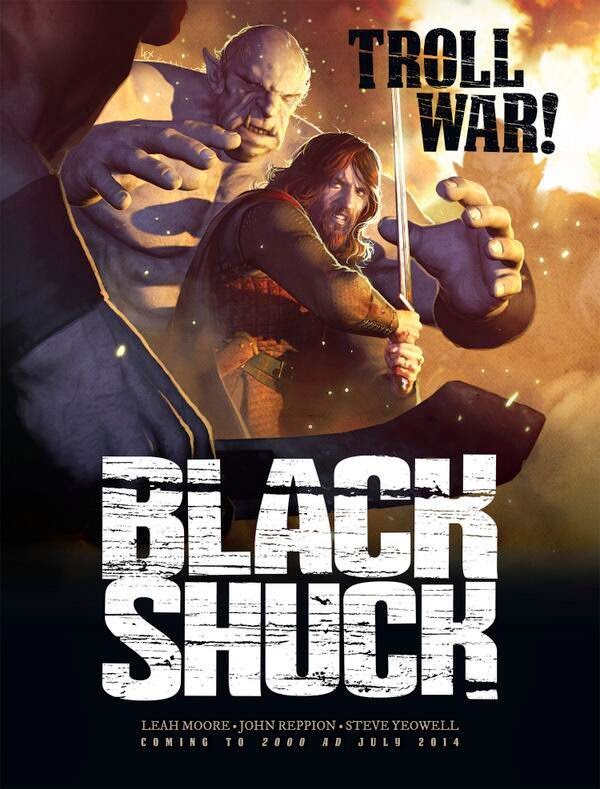 I'm pleased to hear that husband and wife team Leah Moore and John Reppion will soon have a new series they've written starting in 2000AD. The title of the strip is Black Shuck and it's illustrated by Steve Yeowell. It begins in the weekly comic in July. You can read more about it in an interview with Leah and John over at this website:
http://judgetutorsemple.wordpress.com/2014/02/11/an-interview-with-leah-moore-john-reppion-black-shuck-coming-soon-to-2000ad/

The sensational promotional art above is by Alex Ronald and I understand it will be used as a 2000AD cover when the series begins.

I've always liked the comics of Moore and Reppion that I've read. Wild Girl, the mini series they did with artist Shaun McManus, is well worth seeking out if you've never seen it. Likewise, Albion, based on a plot by Leah's father Alan Moore, with art by Shane Oakley, is also worth reading. In case you didn't know, Albion is a graphic novel that revives classic Fleetway and Odhams characters such as Robot Archie, The Steel Claw, Kelly's Eye, Bad Penny, and many more in an inclusive continuity. 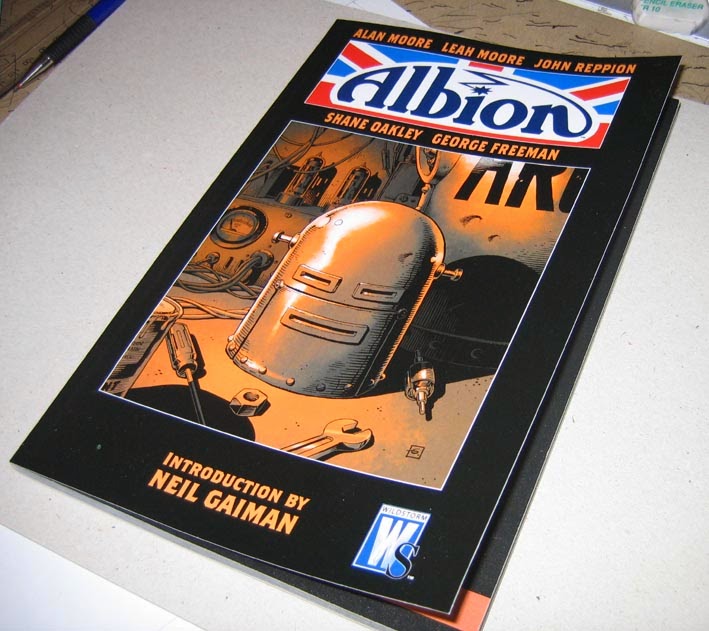 I recently read something that was critical of the writers because they were not familiar with the old strips before they researched them for Albion. I thought the critique was a little unfair, because it seems to me that those old UK characters were quite one-dimensional, so it wouldn't require many back issues to get to grips with the basics. The beauty of those old comics is that they were written to be accessible to new readers, with basic gimmick characters and plots that could be immediately understood by children. It's not necessary to have grown up with those strips for today's writers to grasp their concepts from a few issues. Besides, Albion is a dark modern spin on the characters, with a different tone to Valiant or Lion.

I enjoyed Albion and would urge any fan of those classic characters to check it out. You can read the review I wrote back in 2007 here:
http://lewstringer.blogspot.co.uk/2007/01/heroes-of-albion.html 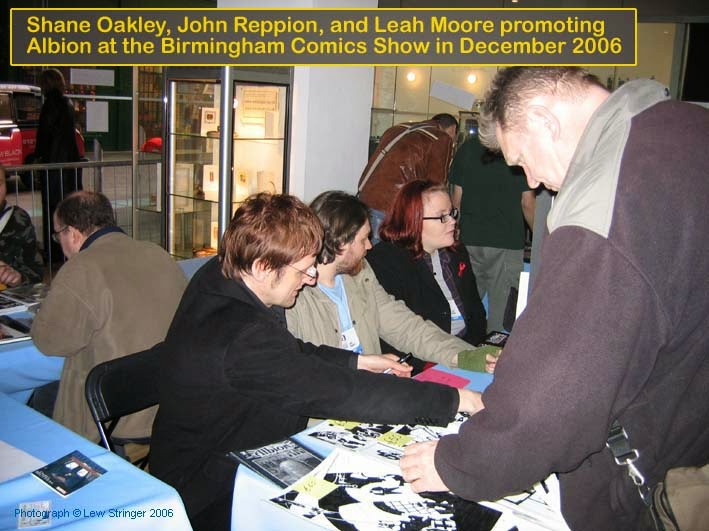 If you want to discover more about the work of Leah Moore and John Reppion, here's their website:
http://www.moorereppion.com/
Posted by Lew Stringer at 19:15

Black Shuck is also the name of a large mythical black dog that I first read about when I was twelve or so and it scared the living daylights out of me !

Yes it's mentioned in the interview at the link. I can't say I've ever heard of it before.

Person who criticized Albion has been made aware of this blog and he says you do not exist to him.

Eh? What's so wrong in sticking up for a book I like?

WTF? I can't see anything in your blog post that would provoke such an OTT reaction from ANYone. Ignore it Lew.

I've given up wondering what sets some people off Gareth. There's more important things in life.

Never encountered the Valiant/Lion characters in their original form, but very curious about them. Is Albion a good jumping on point?

I'm considering going for broke and pitching the concept a new British adventure title to presumably highly skeptical publishers and have few ideas. Wondering if Albion might a good example of modernizing the spirit of old guard titles.

If you're interested in the original stories, the collection called Albion Origins would prove useful, along with The Steel Claw, and King of Crooks, all hardbacks published by Titan. No longer in print but you might find them.

The Albion graphic novel is a darker take on the characters. You'd get a lot more out of it if you were already familiar with all the old characters as recognising the references and updates to them is part of the enjoyment of it, but it's a decent story in its own right.