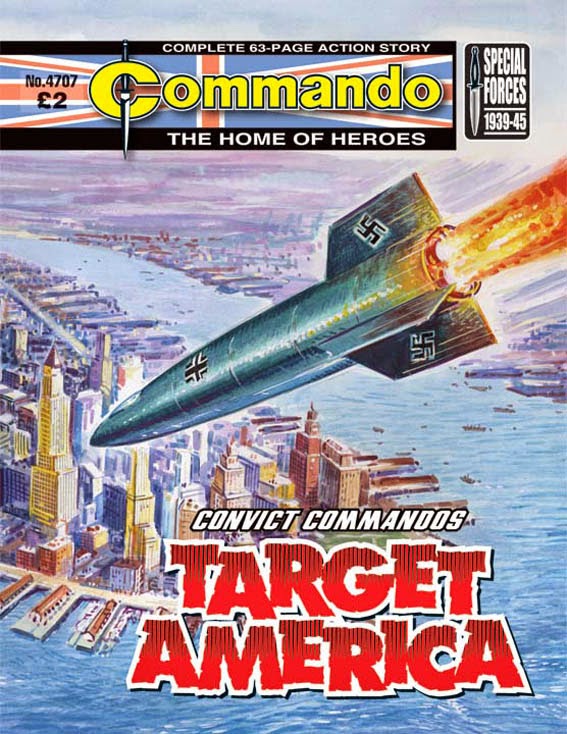 Thanks to Commando HQ at DC Thomson for sending the info and images.

Commando No 4707 – Target America
Corporal “Spider” Mackay, the Convict Commandos’ replacement safe-cracker could be a handy man in a fight. Fearless and with a ruthless streak that struck fear into his enemies, he had yet to be bested.
This time, though, he’d been too hasty in his pursuit of a scrap and had got himself trapped in an intercontinental rocket with a monster high-explosive warhead under his seat. And in case you hadn’t guessed, the rocket’s target was America.
Was there any way out for Spider?

Sergeant Gareth Owen’s sniper’s rifle was a short magazine Lee-Enfield No. 3 Mark 1(T), fitted with a Pattern 18 telescopic sight of X3 magnification.
He carefully set the wind scale and made a lateral adjustment to the telescope’s range drum. A Nazi head came into the sights, and Gareth’s crooked finger took the first gentle but deadly pressure on the trigger…

If I told you the original working title of this story, you'll realise just how far ahead of the game the early Commando scriptwriters, like Eric Hebden, actually were. Lurking underneath Ken Barr's fantastic two-for-the-price-of-one cover (a full-colour illustration and a two-tone red and black one) is a tale of a man with the stain of shame on his character. An unjustified mark, perhaps, but it's there all the same.
The story follows him and some of the disparate characters who make up a Commando team, beautifully rendered by Senor Cortes whose black and white work verges on the "film noir" with his fantastic shadow lighting.
What was the working title, you ask? Band Of Brothers!

Was that really a marauding Viking longship cutting through the waves alongside a sleek German E-Boat? Had some strange time machine brought them together?
No. It was all for a propaganda film being made in Nazi-Occupied Denmark in 1942. The Nazis wished to emphasise that their creed was akin to the wild Viking spirit shown by the legendary Berserker, Ragnar The Red.
However, all was not well — strange accidents started to happen all around as the film’s premiere approached. But it couldn’t have anything to do with Ragnar, could it?

The French village church lay bathed in the rays of a watery moon. The pale light threw black, gloomy shadows which hid the stealthy forms of two British soldiers grimly inching their way up to the roof. One slip meant disaster — not only because of the height but because the church was full of Nazis!

Two minutes? I’d better get a move on…
Here our main character — Bombardier Ted Marchmont — goes on an interesting dramatic journey; one that most fictional characters should go on in some shape or form.
Apart from looking out for his mate, Gunner Tug Wilson, Ted seems to have few redeeming qualities — being arrogant, cynical, war-weary and clashing with his father, a high-ranking (and despairing) military career man.
So, when embroiled in a siege against the attacking Germans, will our anti-hero become a true Commando hero?
Join Ted on his journey and find out. But you’d better be quick. The clock is still ticking.

Some of those look like they'd be worth reading. The Viking one especially.

Commando always did like to sneak a bit of the supernatural in from time to time.

When are you going to write a blog post about SPIKE my favourite comic?

When you least expect it! :)