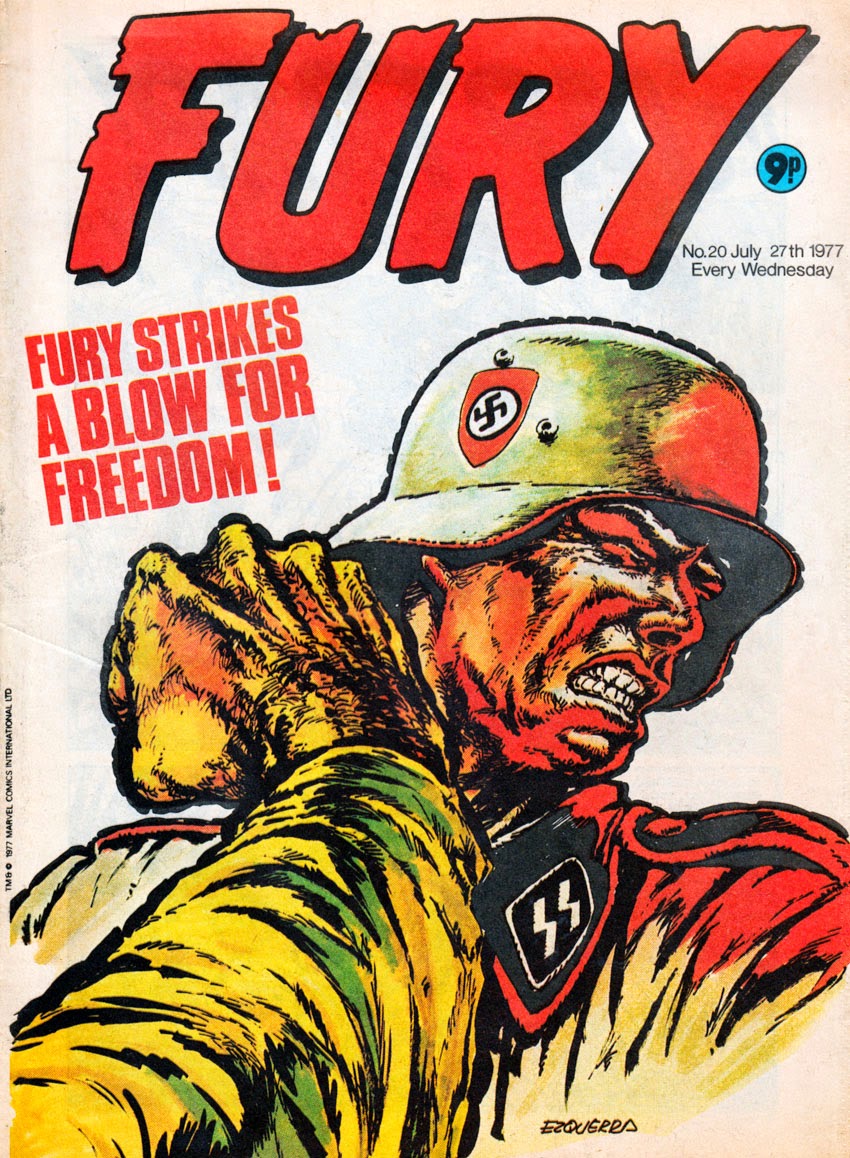 Back in 1977, before the Pet Shop Boys hit the music charts, Neil Tennant was Editor-in-Chief at Marvel UK. The company was putting out a various number of weekly comics at the time, reprinting Marvel strips from the USA, and basically trying to flood the market to rival IPC and DC Thomson.

However, several reprint titles had failed or at least not had the longevity expected of them, and so something different was required. DC Thomson had made a success out of their all-war weekly Warlord, and IPC had followed suit with Battle Picture Weekly, which became another hit. Allegedly Neil Tennant felt that Marvel UK needed a war comic to compete in this area. The result was Fury.

Marvel's war weekly was modelled so closely on Warlord and Battle that even the logo was obviously inspired by those of its rivals... 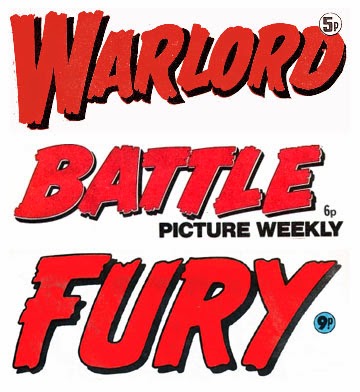 The covers of Fury were also similar to the ones Battle had been running. Powerful images with a punchy message. None punchier than the brilliant one shown at the top of this post by Carlos Ezquerra. The artist had produced many similarly strong images for Battle's covers so it was quite a coup for Marvel UK to commission him for Fury. Unfortunately, the company were not given a budget by their American owners to produce British strips so although Fury looked like a traditional UK war comic on the outside, the interiors were a different matter.

With no option but to use American reprint material, Tennant chose to serialise Sgt.Fury and His Howling Commandos as the main strip, with each 20 page story spread across two or three weekly instalments. Art by Dick Ayers... 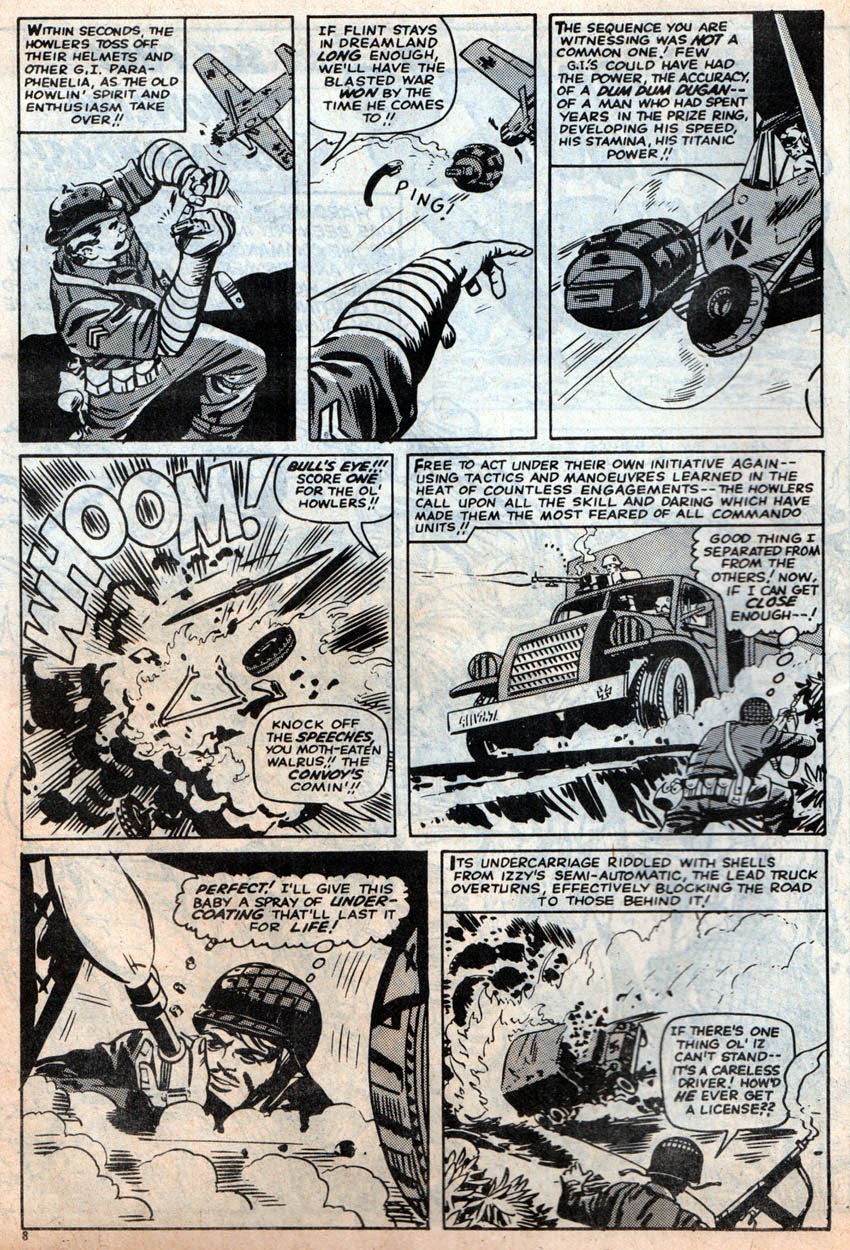 The same applied to Captain Savage and His Leatherneck Raiders, which had been a short-lived Marvel strip from the late sixties with art by John Severin... 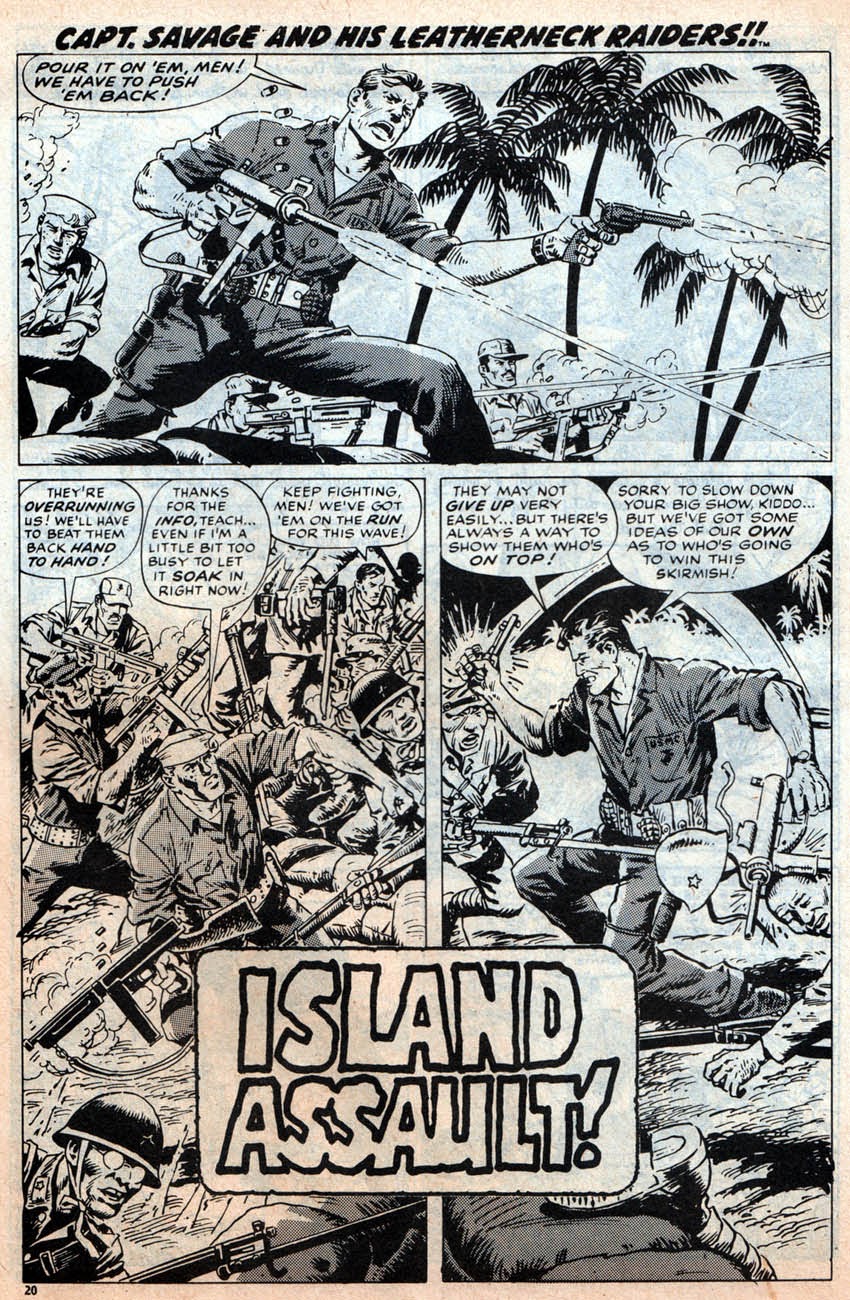 The rest of the 32 page weekly was taken up with five-page complete war stories from Marvel comics of the 1950s. Some of which were looking quite dated by 1977. The Jap Trap is from 1959, art by Jay Scott Pike... 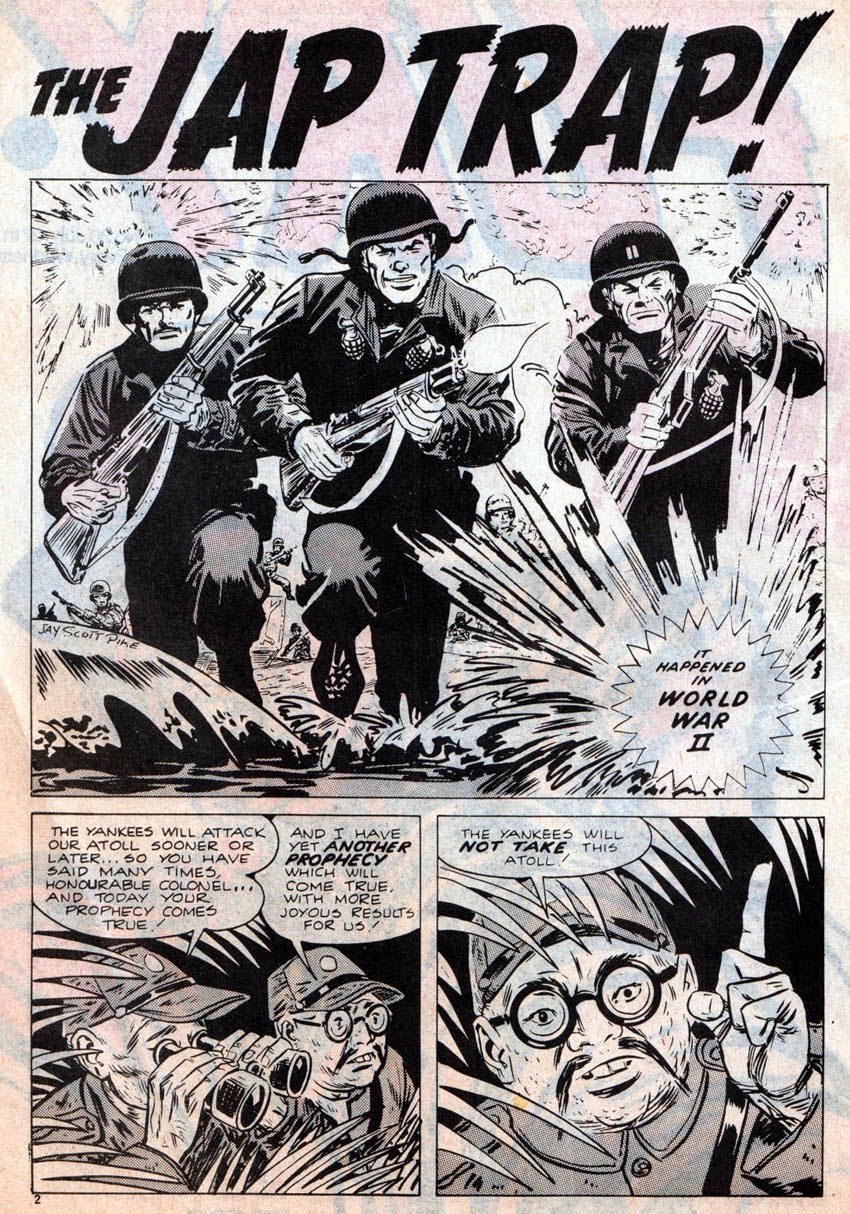 Despite its American content, Fury tried hard to be as close to a traditional British weekly as possible, such as running a letters page 'hosted' by Sgt.Fury himself... 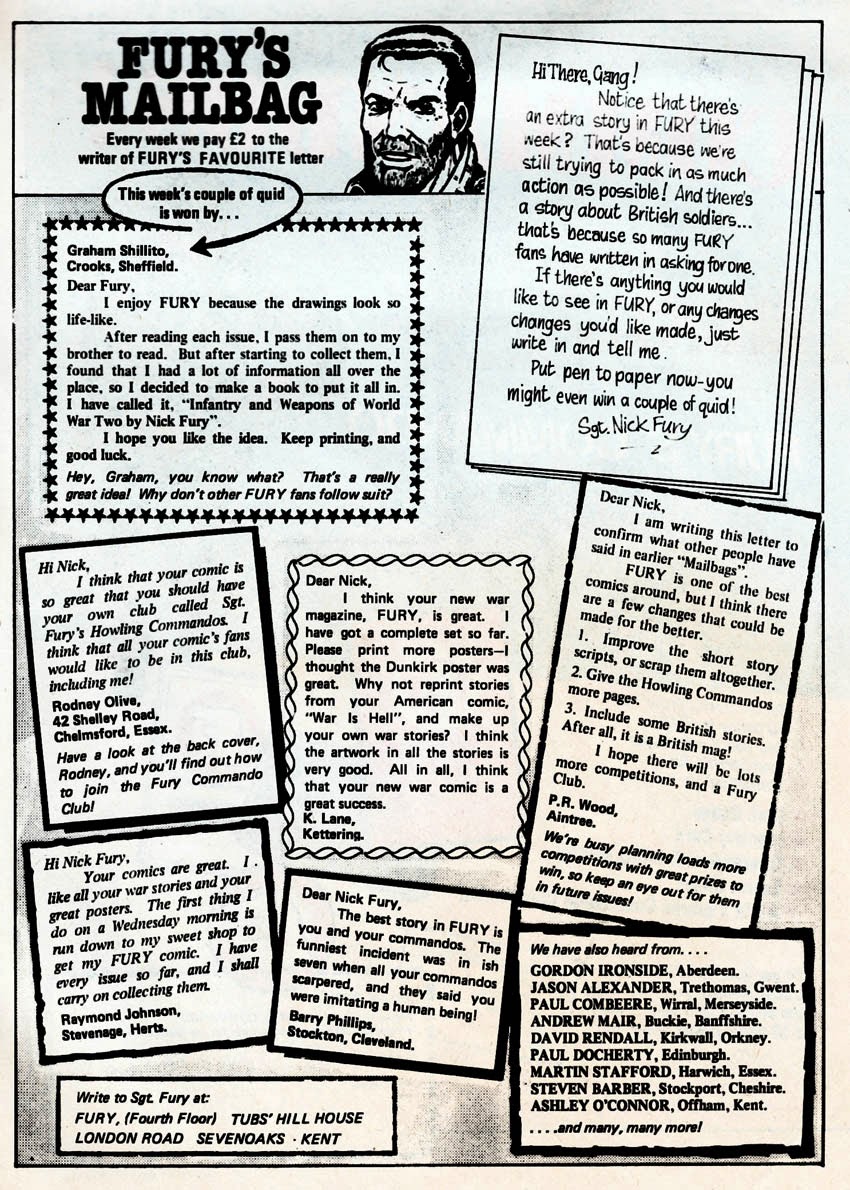 ...and following in the footsteps of Bullet's Fireball Club, Fury encouraged its readers to send in 30p for items such as a club badge, Identity Card, and Secret Codes... 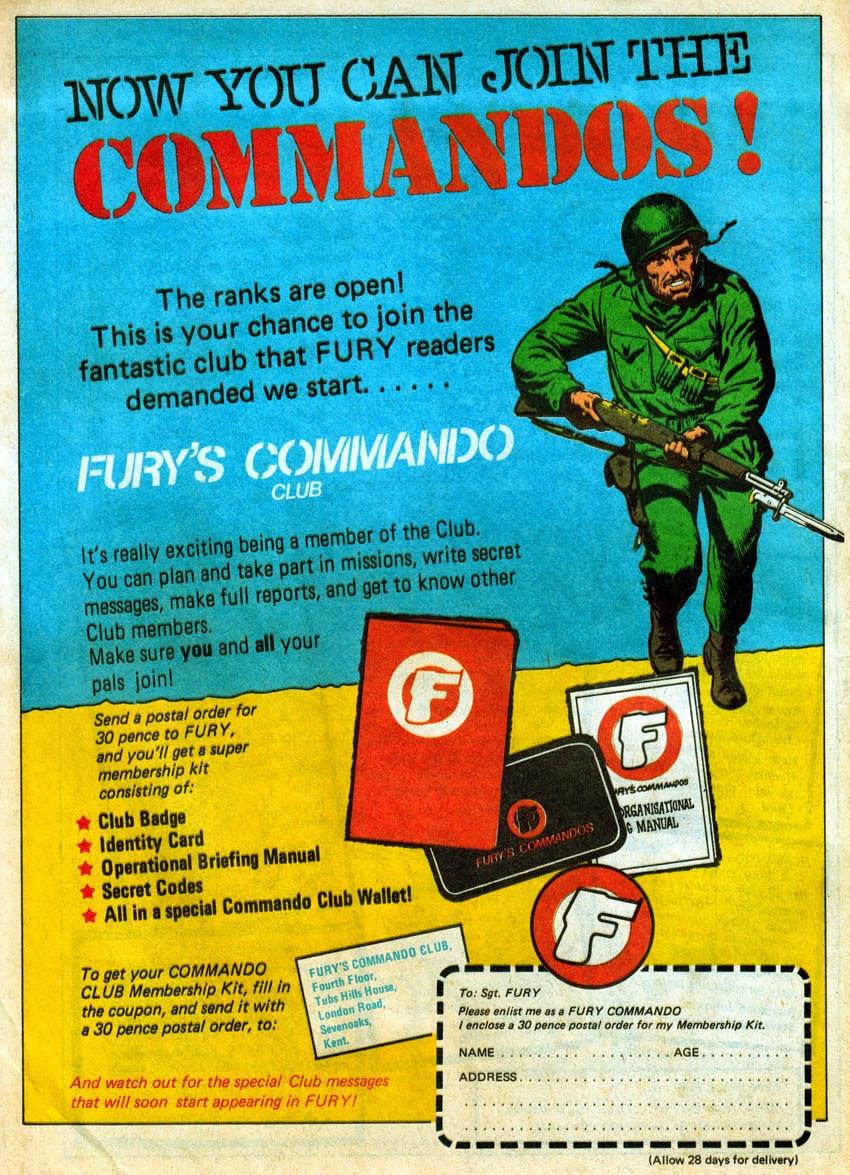 Sadly, Fury failed to attract as many readers as its rivals, probably because the content just wasn't traditional enough. Had Neil Tennant been given free reign to develop a truly British war comic then perhaps it would have lasted longer. As it was, Fury ended after just 25 weeks, merging into The Mighty World of Marvel. Tennant left comics to work for Smash Hits, and a few years later became a huge success in the music industry.

Incidentally, the cover to Fury No.1 was by Dave Gibbons and there's currently a copy for sale from Silver-Acre on eBay if you're quick! Click here! 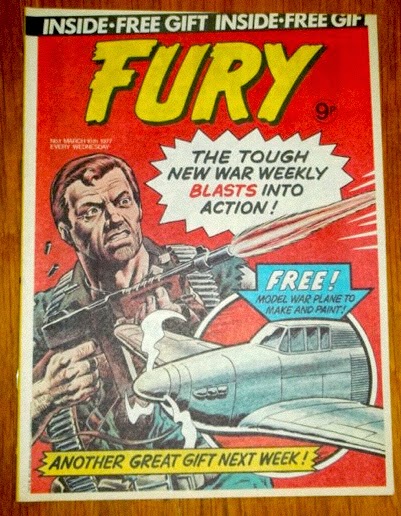 He was probably talking about the reprints of Savage Sword of Conan, which was outside the CCA's power. Some of those stories featured bare breasts in the US originals, and longer hair was added in the UK reprints to cover them as I recall.

He may also be talking about the reprints of The Living Mummy and War of the Worlds. They didn't show nipples, but some scantily dressed female figures were covered up more for the UK reprints in Dracula Lives and Planet of the Apes.

Colin, don't forget that Sgt Fury of the Howling Commandos is also Nick Fury, Agent of SHIELD. So it is connected to the superhero strips. Also, Fury replaced Dracula, who replaced Planet of the Apes, which were also not superheroes. The genre mix was nothing new for the Mighty World of Marvel.

True, and it was The Mighty WORLD of Marvel after all. :)

There'd been a precedent too, back in 1967 when Odhams' POW! featured Sgt.Fury strips alongside Spider-Man and various originated UK strips.

I have a couple of these inside a bound book of single Marvel UK issues. Presumably these books were a clever way of selling on unsold issues. Interesting about Neil Tennant's involvement, Carlos's covers are just fantastic.

I remember those bound collections. Yes, unsold issues I believe.

I was an avid collector of Marvel UK and had a compel;eye run of most titles from 1972 (MWOM number 1) through to about 1981. I never went for Fury though as superheros were my thing and I thought war stories were boring. Now of course I'm an avid reader of back issues of Battle.

"Panther's Rage", reprinted in the "Planet Of the Apes" weekly was spoiled by poor retouching of (amongst others) Monica Lynne's more revealing clothing and bathing ware, not to mention a whole "intimate" sequence between her and T'challa being cut completely from the storyline. The women villains costumes were also altered to tone down the supposed "provocative" tone. It used to drive me nuts when they did this sort of thing, it ruined the artwork.

The similarity of those logos reminds me of when Marvel copied DC Thompson by making the Wicked logo like the Dandys. Here they are copying Battle with Fury. Jok

Andy Oversear, - my apologies for not replying before now. I must have been distracted. Thanks for your comments.

Andy, I agree. I wasn't into war comics at all. (Apart from Charley's War.)

Oversear, yes the edits were quite heavy handed. The UK Marvels were considered to be for younger kids than the American ones so they were probably afraid too much flesh might upset the parents.