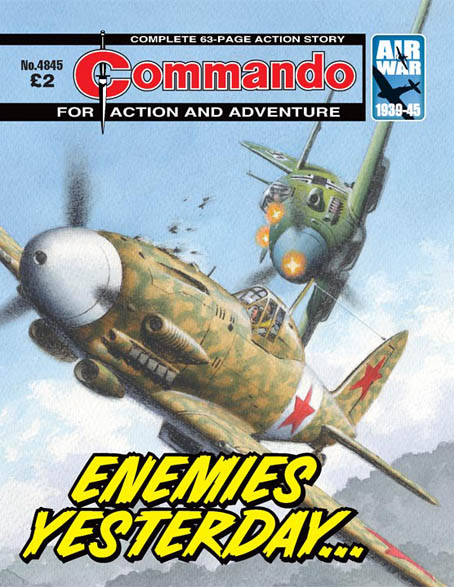 Here's the info on the four issues of Commando that will be in the shops today. Thanks to D.C. Thomson for the press release...

Commando No 4843 – Peterloo!
Thomas Hatfield decided that a farmer’s life wasn’t him and decided to join his local regiment, the Lancashire Light Foot.
Soon he was plunged into the tumultuous events of the Napoleonic Wars. He was sickened by the villainy of a crooked sergeant and his cronies, in addition to the threat from the opposing French army at the battle of Waterloo.
After massacre at St. Peter’s Field, Manchester — which became known as ‘Peterloo’ — the young man wondered if a life in England was what he really wanted…

Introduction
200 years ago, the battle that — arguably if you’re French — set the political landscape of Europe for many generations was fought in a previously insignificant area of what was then the Netherlands. Waterloo.
Waterloo! (Issue no 4823) told a fictional — as we always do — tale of that epic history-defining battle, focussing mainly on the French perspective of the ordinary soldiers embroiled in the heat of the fighting.
Regular Commando author Ferg Handley wrote that story, wonderfully illustrated by veteran artist Carlos Pino. Now, both creators have produced this follow-up, which turns its attention towards the British. Eagle-eyed readers — that’s all of you, we wouldn’t have it any other way — may even have noticed that this book’s hero, Private Thomas Hatfield, and his nemesis, Sergeant Nathan Wilkes, had brief cameo appearances in part one.
Once again, we believe that Ferg and Carlos have done us proud, and hope that you enjoy this adventure.
Scott Montgomery, Deputy Editor

Commando No 4844 – Hurricane Ace
The huge stone statue of Buddha smiled…
Beside it on this remote Burmese hillside lay the smoking wreckage of a Japanese transport plane, with an injured general inside, and a complete set of plans for their invasion of India. From every point of the compass Japanese search parties came to hunt for the wreck. And so did Ian Murdoch – a young Hurricane pilot who’d made the biggest mistake of his career in shooting down the Japanese plane instead of forcing it to land at the British base. Now he had only four men and his own luck and courage to make good on his mistake.

Introduction
As is common with many of the books from Commando’s earliest years, this tale is pretty hard-hitting. There’s seems to be something about jungle tales that bring out an extra grittiness to the writing.
A jungle story, you may well ask?
Yes. Although Ken Barr’s cover is stunning, it’s perhaps slightly misleading. Apart from the first handful of pages, this adventure takes place firmly on the ground — and in the terrifying heat of the jungle. Hurricane ace is a tough read, yes, but it’s worth it.
Scott Montgomery, Deputy Editor

Commando No 4845 – Enemies Yesterday…
A veteran of the battle to defend Malta in 1942, Flight Lieutenant Jim Newman remembered barely surviving against Italian Macchi 200 aircraft.
A couple of years later, when promoted to Squadron Leader in the Balkan Air Force — a multinational unit based in Yugoslavia and fighting the Luftwaffe — the Englishman was less than pleased when some rebel Italian pilots joined their cause.
Although acknowledging that the Italians were gifted pilots, could Jim truly accept that the enemies of yesterday were now the allies of today?
Story: Steve Taylor
Art: Jaume Forns
Cover: Ian Kennedy

Commando 4846 – Day Of Shame
The other pilots sneered and joked about it…the day of shame when they called Jim Black yellow. But Jim wasn’t laughing, and neither would any other pilot accused of cowardice and kicked out of the squadron.
He’d just have to prove them wrong, even without an aircraft…

Introduction
Thanks to a series of unlucky events and the manipulation of an unscrupulous supporting character, our hero, Pilot Officer Jim Black, appears far from heroic in the eyes of his C.O. and fellow Hurricane pilots.
I can only imagine that feeling terrified in the face of constant death and destruction is a completely natural reaction. However, being accused of cowardice must, of course, be one of the worst possible things that could happen to a serviceman during wartime and author C.G Walker’s script certainly highlights this —and since this is Commando, we, as readers, certainly hope our disgraced hero will prove his mettle once and for all.
Scott Montgomery, Deputy Editor
Day of Shame, originally Commando No 2367 (April 1990)