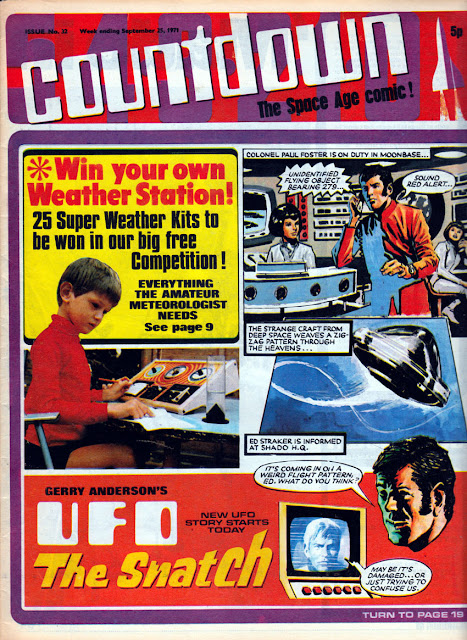 It's been a while since I did one of these flashback features so here's a few pages from the issue of a comic that went on sale this weekend 44 years ago. It's Countdown No.32, dated September 25th 1971, which would have been published on Saturday Sept.18th 1971. (Click on images to see them larger.)

Countdown was a glossy 24 page weekly published by Polystyle, which featured strips based on the sci-fi adventure TV shows of the day. The comic tried to be a replacement for the glory days of TV21, to the extent that it had gained the licence to do strips of Gerry Anderson shows after TV21 had dropped them. (By the time this issue of Countdown was published, the ailing TV21 had merged into Valiant.) 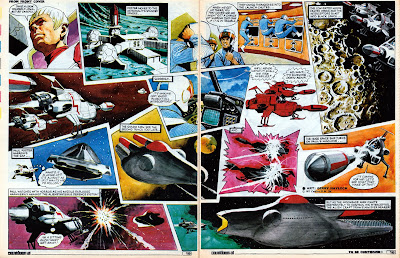 The cover of this issue kicks off a new UFO serial illustrated by Gerry Haylock. One of the great things about Countdown was that it credited the artists; something most British comics didn't do back then.

The centrespread of the comic featured Doctor Who. The fantastic artist Harry Lindfield does a fine job of illustrating a very busy script but there's a lot going on to pack into two pages and it does feel like it would have benefited from spreading it over another page or two. 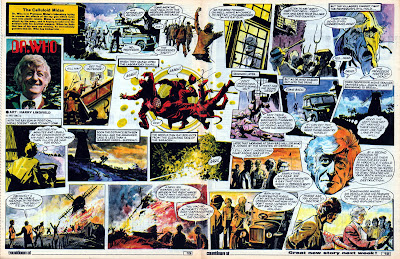 Eight of Countdown's 24 pages were in full colour, and although the content would vary over the comic's run, the Countdown strip itself had its two pages of
colour every week. This was an originated strip not based on any TV show but it
did feature spacecraft designs from the movie 2001: A Space Odyssey. (No spacecraft in this episode though.) Artwork by the always-astounding John Burns. 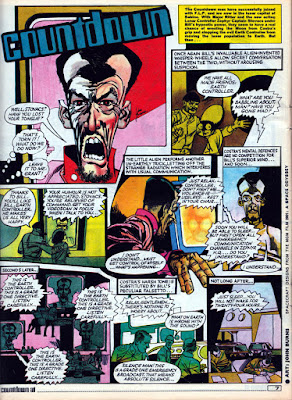 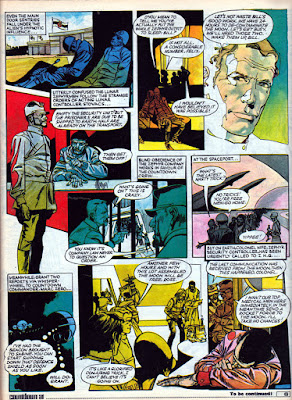 Countdown ran a different complete 7 page story every week, and this week it was the turn of Captain Scarlet. Connecting with continuity with the movie Thunderbirds Are Go, the strip saw the return of the Martian Rock Snakes, - this time on Earth as part of a Mysteron plot. A daft story but great art by Keith Watson... 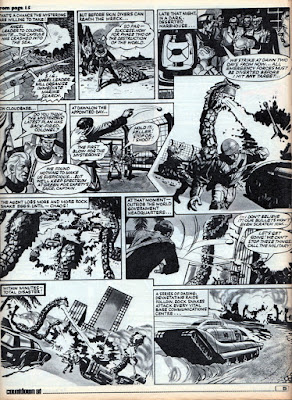 Having the licence for Gerry Anderson strips meant that Polystyle could reprint old strips from TV21, which came in handy when the budget was reduced. Although originally published in full colour, some Stingray and Fireball XL5 strips were reprinted in greyscale. Furthermore, the Fireball strips were reduced and turned at 90 degrees. However, personally speaking this didn't bother me one bit and as a 12 year old I was only too glad to revisit those classic strips I'd read when I was six. 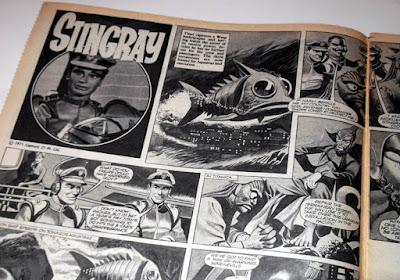 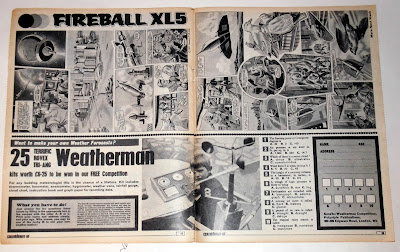 As you might have guessed from the competition to win a weather station, Countdown liked to mix science alongside science fiction. The back page of this issue featured a cutaway of the Apollo Lunar Module (reprinted from a book called Manned Spacecraft). 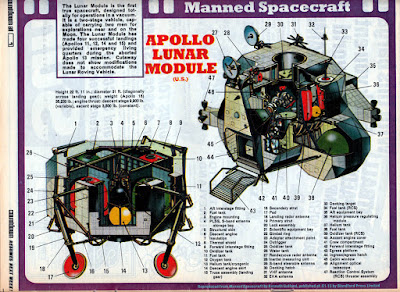 I thought Countdown was an excellent comic, just up my street. No sports or war stories; just science fiction and fact (plus the occasional feature about UFO sightings). Sadly it seems most kids didn't take to it and with issue 59 it changed its title to TV Action, expanding its content to include TV shows such as Hawaii Five-O, and Cannon. Later, it'd incorporate pop pin-ups to compete with Look-In, but it still remained a good TV adventure comic up until its merger with TV Comic in 1973.
Posted by Lew Stringer at 00:00

Fireball: that's a 90 degree rotation, Lew. Back to school for you!

Doh! Why did I put 45 degrees? Well at least I was half right.

I used to love Countdown too and I remember this issue. I wonder how they drew the double-page spreads, did they have a big board or did they do it on two boards?

I found the half-size reprints confusing because there seemed to be some continuity missing, I think in the original there was a story that ran across several strips and Countdown did not reprint them all.

Thanks for the memory!

Yes, without checking I think the crossover episodes with Stingray and Lady Penelope were left out.

From what I've seen, the artists drew the spreads on huge boards, but it wouldn't surprise me if some did it in sections and pasted it together.

Imagine there was a game called Comics What If? What if Mike Noble wasn't working for Look-In when Countdown came out. He'd have been a natural but which strip would he have drawn....?

They tended to shift the artists around a bit on Countdown so I guess he'd have had a crack at a few Gerry Anderson strips. He'd already done Fireball and Captain Scarlet for TV21 of course so perhaps editor Dennis Hooper would have assigned him those again.