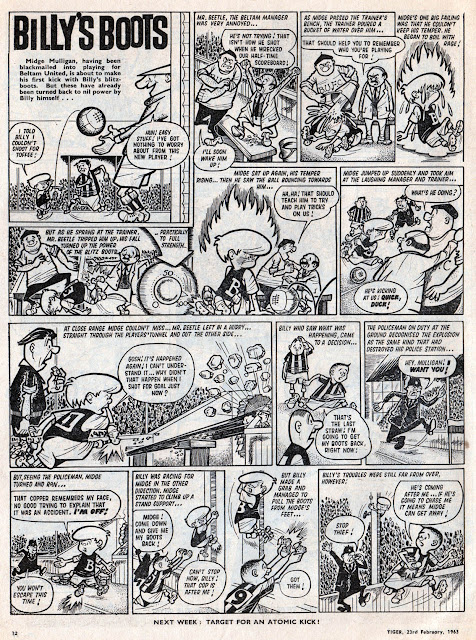 Most of you will be familiar with Billy's Boots, the adventure strip that began in football weekly Scorcher in 1970 and later continued in Tiger for many years. However, several years before that there was another strip with that name and a similar premise. This Billy's Boots was in Tiger in the early sixties, and the example above is from the issue dated 23rd February 1963.

These original boots had a scientific explanation for their power, as opposed to the supernatural influence of the later version. I'm not sure who the artist of this strip was but it's a very nice, bold cartooning style reminiscent of Peter Maddocks and Wally Fawkes.
Posted by Lew Stringer at 19:39

Beautiful artwork, d'you know who the artist is, Lew?

No, unfortunately. Some if it looks like early Peter Maddocks but I'm not sure.

Some figures look like Cliff Brown‘s but 1963 is probably too early for him.

I see what you mean. There's a bit of a similar inkling technique too in the broken lines for some of the folds in clothing. As you said though, it might be too early for Cliff Bown as he didn't seem to appear in comics until the 1970s.

I think whoever drew it is tapping into a certain style of the times. Similar techniques were used by several cartoonists in the late fifties/early sixties. It could be by someone who swiftly moved from comics into other illustration work, or whose style changed a lot. Whoever drew it did a very nice job anyway.

It's great to see this, it looks surprisingly contemporary for over 50 years old! I never knew of this incarnation of Billy's Boots. I love the Billy Boot's artwork by John Gillatt and am continually searching for the Holy Grail that is an original piece of his BB artwork.

I presume you've tried eBay? Lots of the old IPC pages turn up there but I don't know if any Gillatt Billy's Boots have appeared yet. (Apologies if you've already searched there.)

Yes, that cartoon style on the old strip seems to have come back into vogue in some ways, sometimes in a retro fashion. I really like it. Must find out who drew it!

Hi Lew, Yes, I regularly look on ebay, in fact I've just picked up an On The Buses original by Harry North - another of my favourite artists. It's been quite fruitful for Harry North artwork, and this latest one was just £35 - a bargain in my eyes, but John Gillatt work seems rare. There must be a fair bit of it about as he drew Billy's Boots for many years (I love how it changed to cricket during the summer) and there's also his Scorer and Johnny Cougar work. There is some of his Jet Ace Logan strips on the Illustration Art Gallery, but this was a bit before my time so doesn't have quite the same appeal. Love your blog, always an interesting read.

Strange. I wonder if some millionaire collector has snapped them all up? Also, sadly, a lot of artwork from those years was destroyed.

Excellent cartooning I really like this, I bought 3 old Tigers a few years ago in a buLk sale (20 comics in a bag for £10 so a good deal no matter what but as all comics were pre 1972 US and UK) and never really looked at them in any detail I'll need to see if this is in there - great stuff again