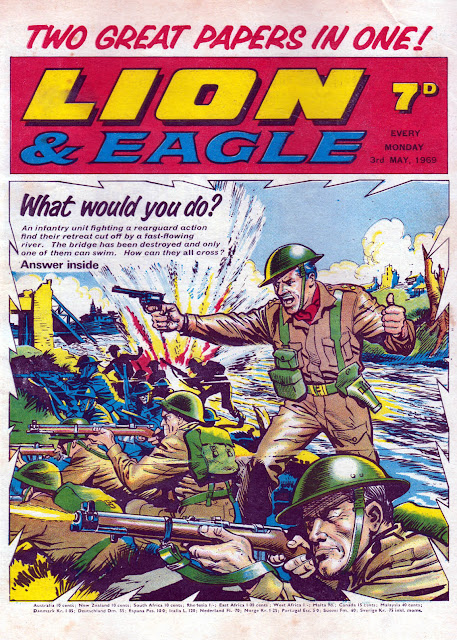 IPC Magazines were quite ruthless with some of the comics when they took control of them from Fleetway and Odhams in 1969. Within the space of a few weeks Smash! was changed beyond recognition, Jag was merged into Tiger, and Eagle was merged into Lion.

The cancellation of Eagle was the end of an era for a title that in its heyday was the pinnacle of British comics. It was even more of a blow that it was merged into a comic that had been created to rival it, but by 1969 Eagle was way past its best.

The first combined issue of Lion and Eagle was published on Saturday 26th April 1969, (cover dated a week later as was the norm, as 3rd May). The cover feature began the series What Would You Do? - which re-used ideas from the defunct Boys' World comic, redrawn by Geoff Campion.

It also featured three new stories that began that week. Let's take a look at them. First off was Turville's Touchstone (later retitled The Spellbinder) which introduced us to young Tom Turville discovering a family secret. The artwork was by Geoff Campion, one of IPC's finest illustrators... 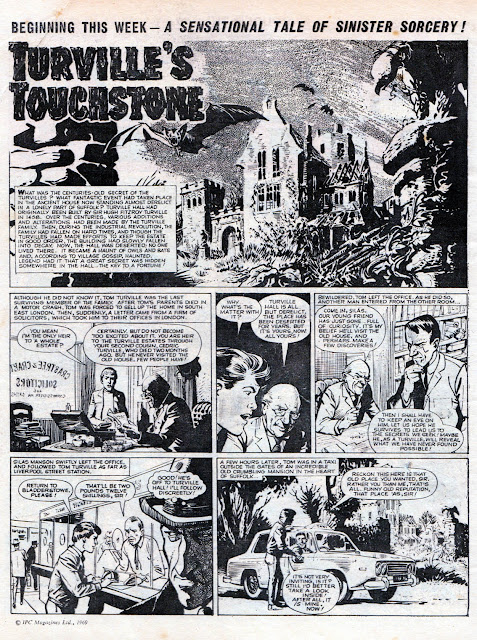 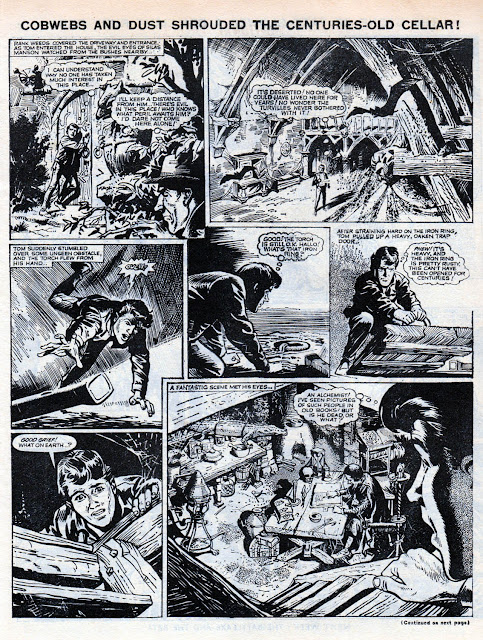 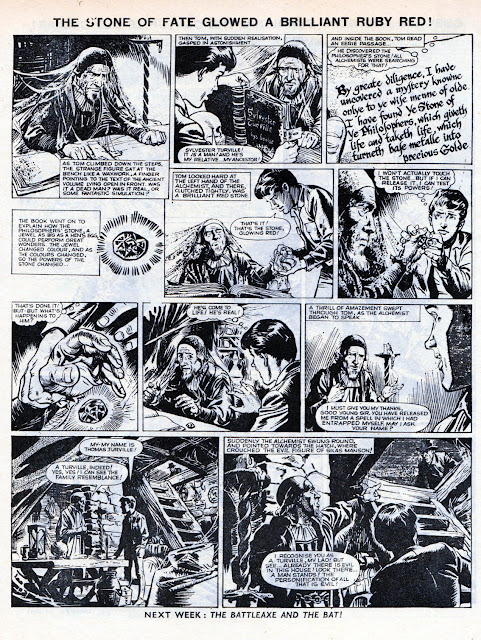 The second new series was Gargan about a boy and his yeti. Artwork by Solano Lopez... 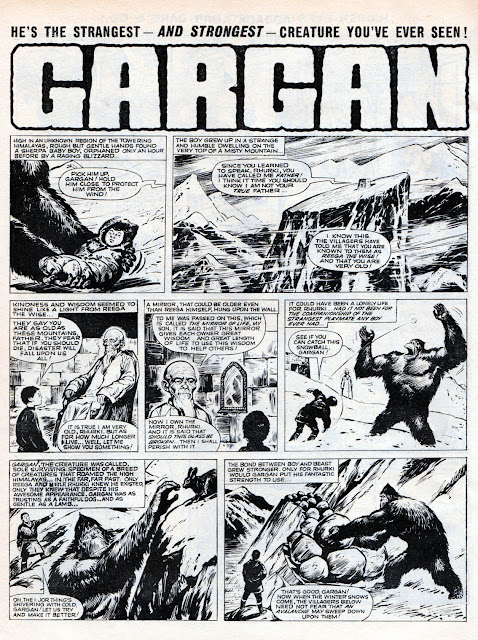 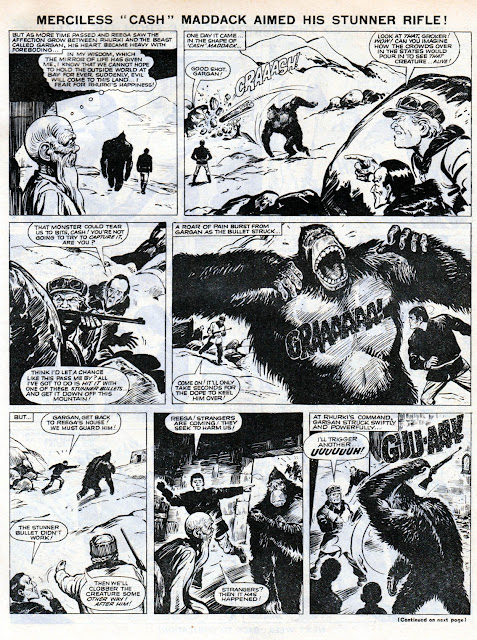 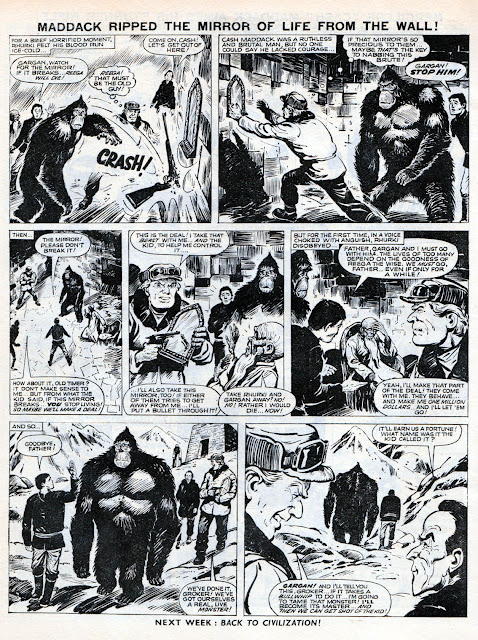 The third new story was Oddball Oates, drawn by the brilliant Tom Kerr, about an inventor who uses herbs to give him an advantage in sporting endeavours. Er, isn't that illegal? Hey, it was the sixties maaan. 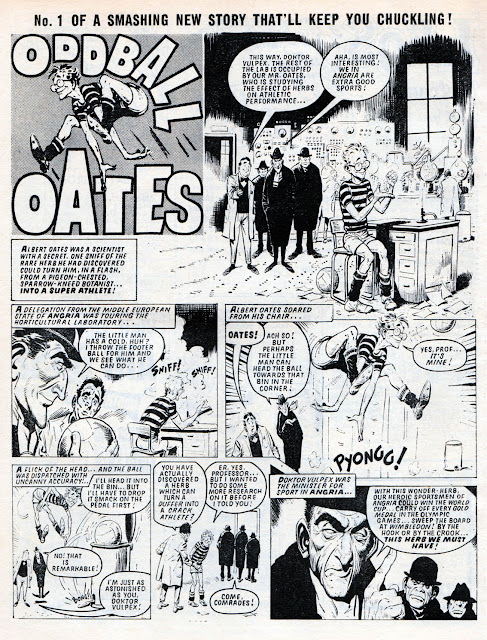 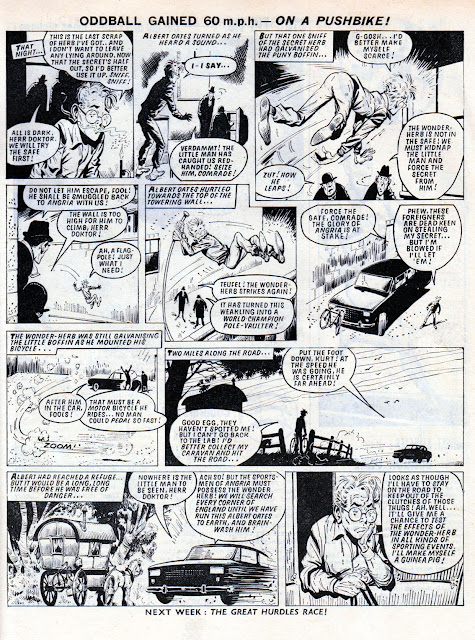 Before the merger, Eagle had been reprinting 1950s Dan Dare stories, but at least it was still in full colour. Therefore it must have been a blow to readers (and to creator Frank Hampson) to find that when the strip transferred to Lion it was published in black and white. Not only that, but the artwork had been considerably altered, with subtle shades of colour replaced by heavy Letratone, and panels cropped to fit Lion's proportions. A travesty, but there was no other option now that it was on cheap newsprint. 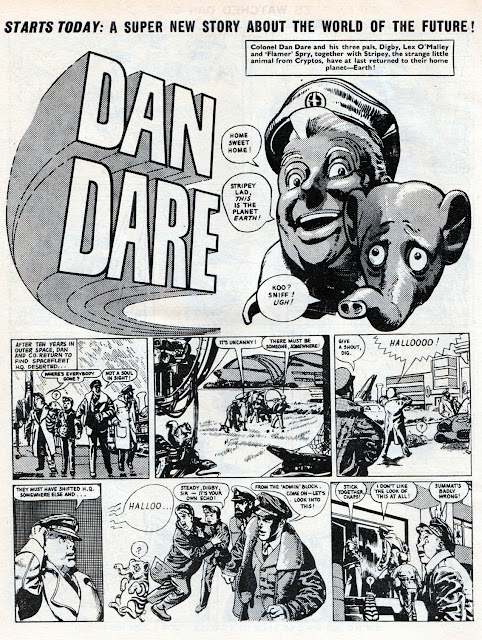 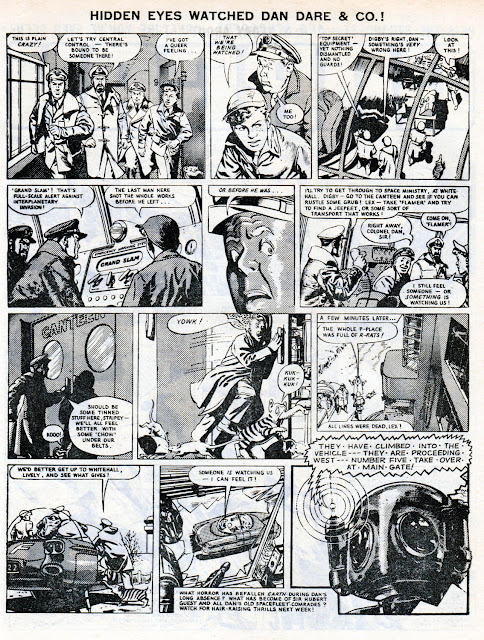 Residing at the back of the comic was the long-running Mowser, the only humour strip in the weekly. Artwork by Reg Parlett... 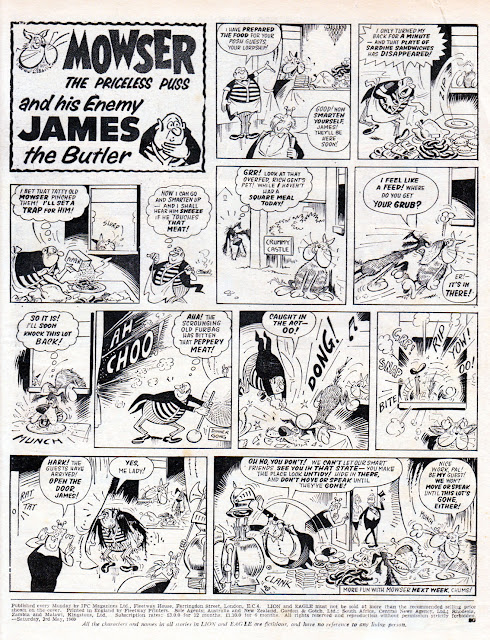 Here's one of the adverts from the issue, back in the days when you could buy an ice lolly for 6d (2 and a half pence). Bespoke superhero Wall's Wonderman promoted the product... 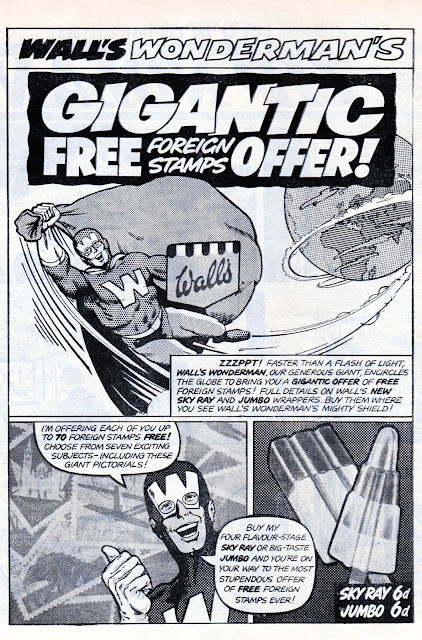 On the back page, after all that excitement, readers were encouraged to buy a tin of Cocoa... 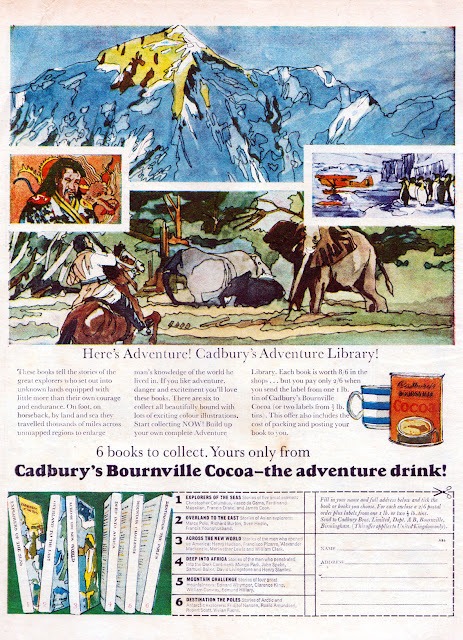 Do you have memories of this comic? Or is it new to you? Either way, feel free to post your thoughts below.

Did the "What Would You Do?" on the front cover come from Boys' World when it merged with the Eagle?

No, as I said, Lion began the series and simply re-used the idea but had them redrawn by Geoff Campion.

Was Dan Dare in it?

Excellent stuff I really enjoyed readingthi issue again after all these years - The Lion was one of my regular weeklies as a kid (and my favourite UK comic along with Smash and Buster). It was especially good to see the first "Odd Ball Oates" strip here with amazing art by Tom kerr - so thanks for that Lew it took me right back to 1969 again (that seems so long ago now).

It certainly was a long time ago, Paul, more's the pity. The sixties seemed such a time of optimism and hope.

I worded my question wrongly, what I meant was, when Boys' World merged with the Eagle, did the Eagle ever feature the strip, long before it merged with the Lion?
Sorry, should have made it clearer!

No, it was rested and then redrawn for Lion and Eagle when they merged.

I loved this comic! I used to read it walking home from the newsagents! I also remember a character called Flame 'o the Arrow!

I think you mean Flame O' the Forest, Keith (although he did use arrows). Art by Bellardinelli. There's some on my blog if you use the search window.

Overlooking the fact that it was a not-yor-cup-of-tea football strip, what is your, as a professional cartoonist, opinion of the quality of artwork on Carson's Cubs?

Fred Holmes? He was top quality, as were all the artists at IPC then.

I've revised my opinion - at the time, going to Lion & Eagle from Eagle when it folded, i thought that in comparison to the others it was poor - however that was a naïve judgment and i recognise that he had a certain unique style, although I think maybe suited to the more humorous strips (which Carson's Cubs wasn't lacking in a tongue in cheek fashion, eg the obligatory disputes with the chairman!)

I know what you mean. He had stiff competition and I preferred artists like Geoff Campion and Eric Bradbury, but Fred Holmes had a solid style and did it well.

Hi! I just came across your blogspot as I had a sudden urge to look up Turville's Touchstone. Geoff Champion was my Dad and he really loved drawing Turville, which then morphed into the Spellbinder. As you know he was prolific and Spellbinder was his favourite. I think a Spellbinder movie is long overdue, wouldn't that be fun?
Keep up the good work.
Carole Lister (nee Campion)

Very nice to hear from you, Carole. Your dad was a fantastic artist. Loved his work. Yes, a Spellbinder movie would be brilliant. Maybe one day! Thanks for commenting!

I think that The Spellbinder (nee Turville's Touchstone) was the most popular strip in Lion comic. I'd love to see it come back in some form. It could make a great TV series. Does anyone remember Fugitive from Planet Scror?

Carole, I'm pretty sure The Spellbinder (nee Turville's Touchstone) was the most popular strip in Lion comic from soon after it began. I do believe it could make a great TV series. I'd love to see it return in some form.

I'm sure The Spellbinder would be perfect for a book collection from Rebellion.

Yeah, I'd love to see that. Sorry my message has got (sort of) printed twice. Just getting used to the blog.