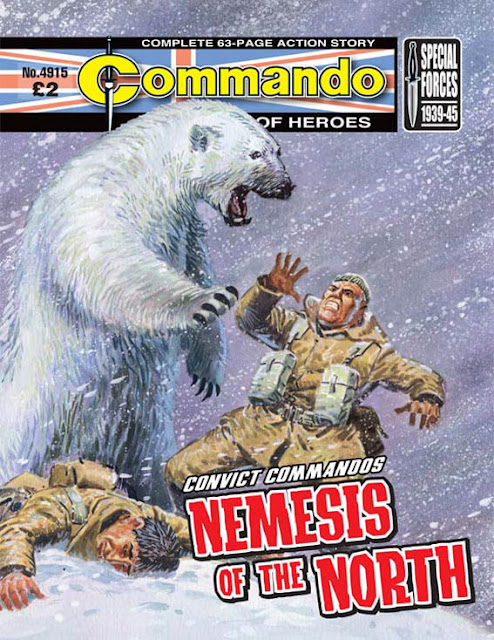 It's the UK comics industry's longest-running adventure title and four issues are released every fortnight (two new, two reprint). It is of course Commando, and here's the info on the four editions that will be in the shops this Thursday...

Commando No 4915 – Nemesis Of The North
Smolenskaya Ostrov, a small island in the Barents Sea, was feared by the Russians, who had given it a much more ominous name — the Island of Death. This inhospitable place was uninhabited, apart from the packs of the ferocious polar bears who roamed its barren wastes.
Now, “Jelly” Jakes, Titch Mooney and the rest of the Convict Commandos were tasked with preventing the outbreak of a deadly virus — if they could survive long enough to complete their mission.

Commando No 4916 – Duel To The Death
It was like a duel between two knights of old. Each combatant knew the look and reputation of the other. Only this time, on one side was a giant white Sunderland flying-boat and on the other, a black-hulled German submarine, the U-37. Dick Stapleton and an Aussie crew flew the “Flying Porcupine”; the merciless Nazi, Kapitan von Bloeke, commanded the U-37.
The North Sea convoy routes just weren’t big enough for both of them…

Introduction
Sanfelix’s stunning cover image perfectly encapsulates a truly thrilling sequence from this book (and it’s on pages 10-13, if you wish to skip ahead). Expertly drawn by veteran interior artist Gordon Livingstone, one of our heroes attempts to extinguish an engine fire on the wing of his Sunderland Flying Boat…while it is still in the air.
As far as I’m aware, I’ve never seen anything quite as daring as that in many years as a Commando reader and, latterly, as a Commando staffer. Wonderful stuff indeed.
Scott Montgomery, Deputy Editor
Duel To The Death, originally Commando No 210 (April 1966) 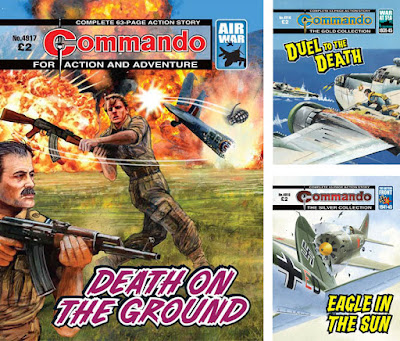 Commando No 4917 – Death On The Ground
In 1963, in the skies above a group of remote islands in the South Pacific, many military aircraft disappeared without trace — so many, if fact, that the area became known as the “New Guinea Triangle”.
When R.A.F. Flight Lieutenant Jon Day, and his C.O., Squadron Leader Richard Gibson, became embroiled in the mystery, they discovered that their dangerous foe was on the ground as well as in the air.
The Englishmen would have to improvise and use their wits to survive — even if that meant using captured weapons to bat away enemy grenades!

Commando No 4918 – Eagle In The Sun
In the air war over Russia Anton Pozetski found life dangerous and confusing. It was easy to identify the enemy — they were the Germans and they shot at you. However, it wasn’t so easy to identify your friends. For a start, the Political Commissar and the Squadron Commander were apt to stab you in the back and they regarded the R.A.F. as enemies.
Life was going to prove even more difficult for Anton when he joined an R.A.F. squadron on active service.

Introduction
All of our artists are very versatile and capable of drawing any subject. However, even after five decades, Ian Kennedy is still usually our first port of call whenever we need an aeronautical cover. So, I imagine that’s what happened back in 1991 when the then-editorial team wanted an illustration featuring a Russian Polikarpov 1-16 using its propeller to shred the tail fin of an enemy Heinkel 111 bomber. Featuring Ian’s usual dynamic style and sense of drama, this is yet another prime example of his legendary work.
Scott Montgomery, Deputy Editor
Eagle In The Sun, originally Commando No 2497 (August 1991)