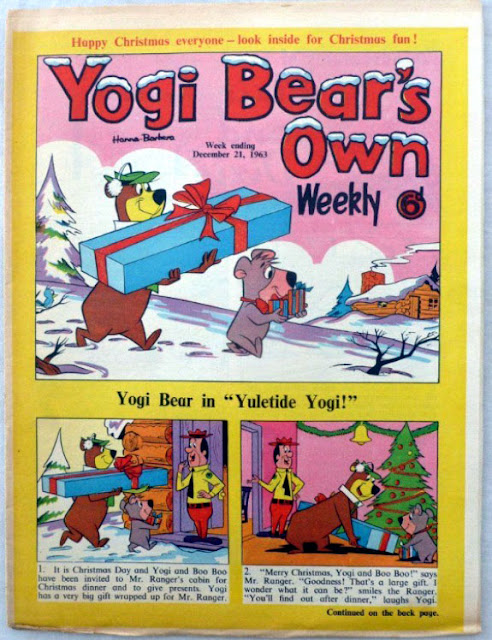 Here's the cover to the very first weekly comic I had. Yogi Bear's Own, dated 23rd December 1963, published by City Magazines. I threw my copy out decades ago but always wanted to replace it for sentimental reasons. I saw this one on Phil-Comics eBay listings recently as a job lot with two consecutive issues. I started bidding on it but as the rival bids increased I decided it wasn't worth pursuing. In the end it sold for £28, so I'd have probably had to bid over £30 to win.

The other reason I backed out was that the only thing I remember about the comic really was the cover, and I could see that at a decent size in the listing (as the image I've taken from there shows). I have practically all the old comics I want now, and have decided to stop buying back issues. Regaining the first comic I had would have been a fitting closure to my collection but for £30 or more for something I vaguely remember? Nah. Couldn't be bothered. If I ever see one for about a tenner or less, maybe.

That was the only issue of that title I had, I think. A few weeks later, in January 1964, my mum bought me my first Dandy on my first day at school. I stuck with that comic every week, adding The Beano and a year later, TV Century 21 to my regular reads. Even at four years old I found nursery comics like Yogi Bear's Own too babyish really, and didn't bother with them again apart from the very occasional issue of Bimbo or TV Toyland.

Is there a certain single issue of a British comic from your childhood you'd like to regain? Or, like me, decided not to pursue it when you finally found one? Leave a comment below and if I have the object of desire maybe I'll show some pages in future posts.
Posted by Lew Stringer at 01:22

Email ThisBlogThis!Share to TwitterShare to FacebookShare to Pinterest
Labels: Yogi Bear's Own

Now then, with me, my very first comic was a Playhour in the fifties, followed by a Jack and Jill the next week. After a while, Harold Hare from Jack & Jill got his "Own Paper", which I would get every week, until Huckleberry Hound Weekly came out and I swapped over to that.
I can't remember the exact first issues of Playhouur or Jack & Jill that I got, but, if I did know, I would certainly scour the internet for scans of the covers!

There is one Beano , Lew .I think it must have been around the time that Beano went "new bigger size". Sometime around 1960 or thereabouts , I think. This particular issue had a free squirt ring gift. It remains in my dreams as one of those unrequited times where everything you are dreaming holds you back until finally when you reach the shop the issue is sold out and you are too late forever. I don't even know which issue that might have been....Something similar happened with the Dandy Annual 1960...but I finally managed to buy a sparkling copy of that one a couple of years back. Like yourself I don't collect many comics now. I have a house full already but I am tempted to the occasional piece of original artwork and managed to recently pick up some interesting little pieces by the genius Roy Wilson...nothing major mind, several pencilled and partially inked pieces...lovely to see his original work.

I have a memory of a Harold Hare story that I reckon is my first comic that I can remember. No ideas where though, possibly a Jack and Jill annual.

Asking people to remember their first comic is a tall order, Lew. I don't think anyone would remember that. I remember having a Beano but it wasn't my first comic.

I didn't ask people to remember their first comic, Alex. I asked if anyone remembered "a certain single issue" from their childhoods, ie: any comic that stuck in their memory.

So many that stick out in the memory but I particularly remember my eldest brother bringing home Pow!#1 just a few weeks before my 6th birthday back in 1967. Almost certainly my introduction to Spiderman. And the Spidermatic gun was exciting as well. I was well-impressed by The Python and Dare-a-Day Davy. However,I have no memory of the Nick Fury strip that was reprinted in it.

Several memorable comics from early days, Lew – like yourself, TV Century 21 from ’65, Ranger (from the same year) with the awesome Trigan Empire, Rob Riley and Jason January, Space Cadet (set in my home town of Portsmouth…in the future!) but the one that always stuck with me (and which I spent years tracking down) was the Mystic Bumper Book, published by Len Miler in ’64. I didn’t remember the title, just the details of one story (about a grave robber who sold the spoils in his nearby shop), which scared me to death and fascinated me at the same time, and snatches of the other stories. I finally got hold of a copy a year or so ago and the other stories (once revisited) were equally familiar again. I think that is probably responsible for my love of horror comics, which endures to this day. But the very first comic I actually remember though is Bimbo issue 1, with free balloon. I wasn’t quite 2 years old when that came out, so it must have made an impression!

For some reason I've always wanted issue 2 of Yogi And His Toy, but only if it came with the free pack of playing cards.
It sticks in my mind for no apparent reason, but doubt i'd ever manage to obtain copy complete with gift.

Lew, you should have bought the comic. I bet you would have unlocked some deep buried memories of one or more of the contents pages.

First comic I remember reading was Teddy Bear delivered every Friday evening. My father worked in a bank and was always home late as they balanced the books. Cue some motherly spoiling of only child as she read said comic to me following my bath night and sat in PJs and Ladybird dressing gown with the ladybird red buttons. Happy days indeed!

That is an amazing story that you actually recall and then saw your first weekly comic - your career as an artist probably helped you on that with your talent for art re the cover - I have wondered a few times what my first comic was but really can't recall but like a few folk have mention Harold Hare (from Jack & Jill?) rings a bell as does Bimbo but my memory of time is sketchy. As to remembering a single issue from childhood well POW issue 1 has always stuck in my memory and (more so) the US comic "The Mighty Crusaders" (Mighty comics) issue 4 - I managed to get the story in a n Alan Class comic a few years ago and my recollection of the strip and characters was almost 100% (saying that i may have got that a few years after it came out in 1966 so maybe I was about 8 when I got that). I still have a few comics I want to purchase from my childhood (at reasonable prices) but at the same time I am thinning out my comics at an alarming rate - strangely the ones I find it most difficult to get rid of are my UK comics from 1966 - 1971

I don't remember my first comic but I definitely remember my first MARVEL comic which was Planet Of The Apes No.5 week ending November 23rd 1974. All the Marvel UK POTA weeklies are available to read on the Hunter's POTA website but unfortunately only the apes strips are shown on the site, none of the back-up strips. But POTA No.5 also contained Gulliver Jones(Warrior of Mars) and Ka-Zar.

Although I remember TV Comic featuring Supercar and Doctor Who, the one comic that really sticks in my mind has to be the first issue of TV Century 21, published in 1965 and the single most memorable story was Mike Noble’s Fireball XL5. It still looks amazing even now.

John, Paul, as you mentioned Pow! No.1 it reminded me I hadn't looked into it in much depth so I've now posted more pages from that first issue. I hope it stirs some memories.

Ken's mention of Teddy Bear comic really rung a bell - I just googled it and apparently Teddy Bear was published from 1963-73 so that was possibly my first comic too. I'm almost certain I had a Teddy Bear annual in about 1971.

Thanks, as always, for your kind comments Lew. Regarding Paddykool I think it is possible that he may be conflating two memories into one from around the same time.
For while none of the Thomson comics were giving away a Squirt Ring at this time both of their boy's picture papers were doing so. The New Hotspur gave away a 'Super Squirt Ring' with issue No47(10/9/60) and then the same gift found its way into the pages of the first issue of the Victor published in February 1961.

Thanks for the info, Ray. Very useful as always.

Ray...You could easily be right about the squirt ring...Memory is a trickster alright. I would have been about aight at the time and I suppose without television at home comics coming out weekly were almost like magical talismans.I may well have mixed the two things together in memory.