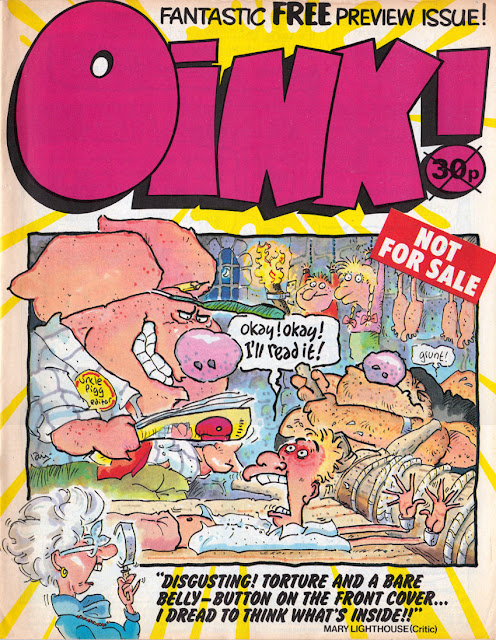 I've been so busy recently I'd forgotten it was the 30th anniversary of Oink! comic last Tuesday! I'm still busy, so I'm afraid this tribute will be brief but I felt I had to celebrate it somehow as not only is Oink! fondly remembered by so many readers but it was such an important comic for my comics career.

Oink! arrived in newsagents on Saturday 26th April 1986 in the form of a full size 32 page preview issue bagged with that week's issues of Whizzer and Chips, Buster, and Eagle and Tiger. The comic had been in the planning stages for two years and most of the content of the preview issue was from the dummy issue. 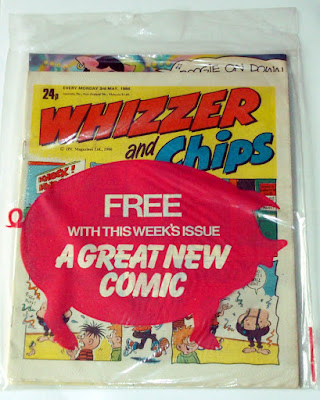 Here's a few pages from the Oink! Preview Issue. I haven't time to scan them so I've just taken photos for now. I'll replace them with scans at a later date. Click on images to see them at full size. 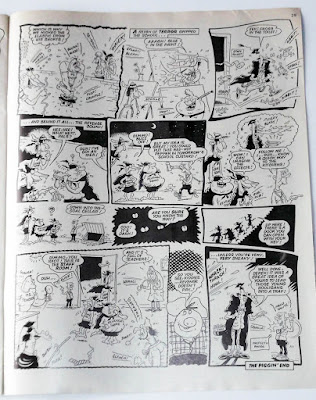 Oink! was unique. A wilder comic by mostly new creators that broke away from the rigid formula of other IPC titles. The contents were never set in stone; although it retained a few regular characters it also featured loads of one-off strips and short run strips. The remit was to keep it fresh, and most importantly, funny! Readers who were kids back then have confirmed that it certainly succeeded on that score. (There's even an Oink! Blog dedicated to the comic. An essential read for every pig-pal: http://the-oink-blog.blogspot.co.uk/)

Oink! ran for 68 issues over two and a half years before merging into Buster. Maybe it would have lasted longer if WH Smith hadn't meddled by shifting it away from other comics because they felt it was unsuitable for children. (Bear in mind this was before there was an older-readers comics section in Smiths, so Oink! was shoved into different places every week, beside magazines devoted to nursing, caravans, or whatever.)

Oink! was a joy to work for. We had so much freedom on the comic (within reason of course) and for those of us who were relatively new to the industry then it gave us the opportunity to develop and experiment. A couple of years ago, on my other blog, I explained my involvement with the comic so I'm cutting and pasting that here....

One day in 1984, while visiting Bob Paynter, the Group Editor of the IPC humour comics, up at Kings Reach Tower on London's South Bank, he told me of a new comic that was in development. This was to be something different, more anarchic and unpredictable than Whizzer and Chips, Whoopee, and the rest. It was the brainchild of cartoonists and writers based in Manchester and although they'd already presented Bob with a rough dummy issue, Bob wanted to bring in more artists for variety.

The comic was then called Rrassp! as I recall, although it would soon evolve into Oink! as the project got under way. Bob Paynter told me he saw the venture as an ideal opportunity for people who were either stylistically different to IPC's usual look, or were keen to become comic artists and not yet ready for the company's other publications. IPC were going to invest in a dummy issue of the new comic, and would be putting a lot of money into a launch if it went ahead. Therefore Bob didn't want any time wasters, and was only inviting people who were genuinely interested in drawing for them. I was already producing cartoons for Marvel UK and had 'ghosted' a lot of children's books for Mike Higgs, so this was a great opportunity to do something for IPC, who were the main British comics publisher at the time.

Bob asked me if I had any ideas that might be suitable. I mentioned a "dim skinhead bully character" I'd been developing, which he seemed to like. (Bullies are always useful in slapstick strips.) "Perhaps his dad could be pushing him to be a bully to follow the family tradition, to inherit his boots" suggested Bob. I liked that twist to it, and, filled with enthusiasm, went home to develop it further.

The name 'Tom Thug - What a Mug' came to my mind because I knew IPC liked puns on existing concepts and it sounded a bit like Tom Thumb. Here's my initial rough sketches of the character from 30 years ago that no one has seen before. Brand new characters often take a while to get right and Tom looked more like Frankenstein's monster in this concept than a school bully! 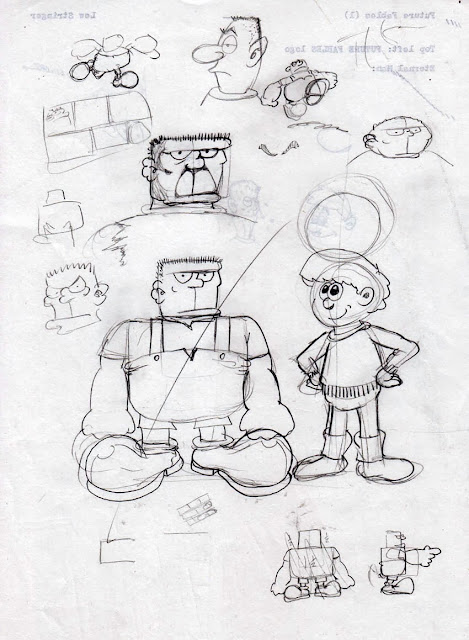 Anyway, after a few more sketches, I eventually gave Tom a rounder look and something I felt comfortable submitting. The routine was that Bob only wanted to see the strip in a pencil stage at this point, and if it was good enough he'd ask for it to be completed. Here's the actual artwork I sent him... 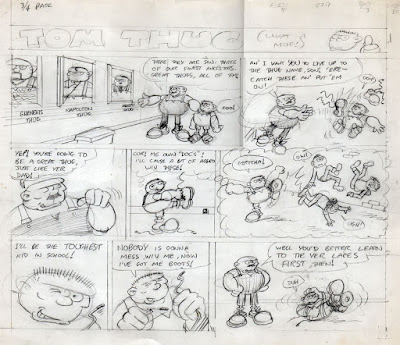 Bob liked the idea but sent me a rewritten script for a new version. Initially I was a little disappointed that some of the energy seemed to have been taken out of it, but in retrospect Bob's rewrite was a much tighter script and was a better build-up to the punchline. Here's the new version, scanned from my original art... 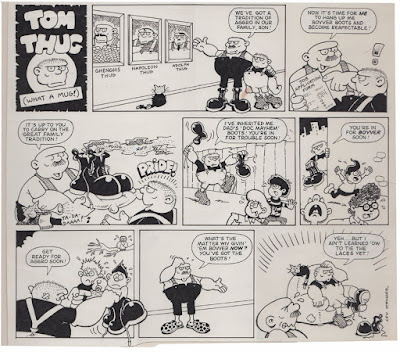 That's the version which appeared in the 'dummy' issue and was printed in the Oink! Preview issue that was bagged with several IPC titles. Yes, it took about 18 months or more for IPC to do their market research, tweak the comic, and finally give it the green light!

Tom Thug became one of Oink's regulars from the outset, with me on scripts and art every issue (with some rewritten by the editor, the late Mark Rogers). When Oink! merged into Buster in late 1988, Tom Thug had proved popular enough to transfer over, and then became one of Buster's most popular strips.

I will always remember Oink! with fondness, not only for the opportunities it gave me, but because it was such a great comic! I used to look forward to seeing what everyone else had done that week and we were all having such a good time on it. The editors Tony Husband, Patrick Gallagher, and the late Mark Rodgers were great to work for and creative people in their own right. Happy 30th anniversary Oink! You were piggin' brilliant!

Lovely post, Lew. Very much enjoyed seeing the development of Tom Thug and Bob's imput. Have to say, I thought he did a bang up job editing your script. Thanks for posting.

The Oink preview issue was also given away free with that week's NME. Hoping to catch those indie kids!

They were good times, weren't they David? This means we've known each other about 29 years!

I didn't know that, Sean! Cheers for that info.

I believe I got the preview in a zx spectrum magazine, cannot remember it's name though!

Thanks George! Good to hear from you.

Darren, the mag was CRASH! and the Oink comic in that was in 1987, specifically done for the magazine to promote a computer game. More info at this link:

Didn't the Viz guys get invited to the launch party (as it was intended to be a "Viz for kids", though no doubt that target audience just got hold of the real thing and passed it round behind the bike sheds), and kidnap the cake? XD

That's right, Ken. The first time I met Marc was at the Oink! studio in Manchester but as I wasn't really into the music of the time I didn't know he was in The Fall. We walked to the pub for lunch and loads of people in the street were saying hello to him. I thought "Blimey! Oink is really popular up here!" :-)

Mike, yeah, apparently they did nick the cake. I wish they hadn't. It caused a lot of upset that night.

Yeah that was it; I remember now! Still waiting for the game to load though!