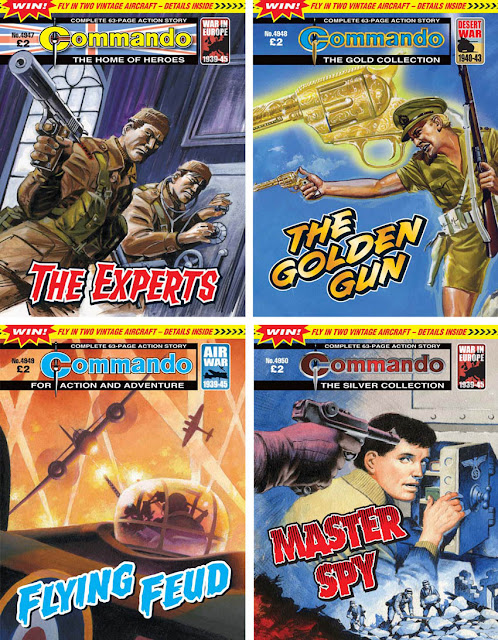 Here's the info on the four issues of Commando that hit the shops last week. You'll find them in branches of WH Smith and selected newsagents. If you prefer to read them digitally you'll find them on Comixology and Readly.

My thanks to D.C. Thomson for supplying me with the info...

Commando No 4947 – The Experts
Lieutenant Doug MacKay was a non-nonsense agent of the Special Operations Executive — used to doing things by the book.
When tasked with uncovering vital intelligence plans from a Nazi safe deep behind enemy lines, the unyielding operator did not expect to be paired with Private Alex Drake, a former criminal but an expert safecracker.
Drake was under no illusion that if ever it looked like they might be captured, his SOE mentor would rather kill him in case he cracked under interrogation. It was an uneasy alliance, to say the least.

Commando No 4948 – The Golden Gun
A real hero’s gun.
A Colt .45, the long barrel gleaming with gold plate, cunningly engraved. The butt of ivory, the whole weapon as perfectly balanced as a bird and on a hair trigger.
Many a time cowboy film star Brad Landon had got himself out of a movie tight corner with a lightning draw and the bang-bang of a blank from the Golden Colt. But now he was Lieutenant Brad Landon, British army, and in the thick of the Dunkirk retreat. The draw had to be faster, and the golden gun was spitting real lead instead of blanks…

Introduction
Unusual, almost fabled objects such as our eponymous handgun have been a Commando staple throughout the decades. They are a good device for propelling a plot forward and also, as you’ll see here, a handy way to geographically move the story along too — from a rear guard action at the beaches of Dunkirk to the arid deserts of North Africa.
The late Ken Barr’s rendering of the Golden Gun itself is wonderfully lurid and dramatic too. It’s almost as if this book was tailor-made for the gold Collection itself.
Scott Montgomery, Deputy Editor
The Golden Gun, originally Commando 249 (February 1967), re-issued as Commando No 903 (January 1975)

Commando No 4949 – Flying Feud
As a tail gunner on an Avro Lancaster bomber, Sergeant Lex Duffield was used to danger in the sky.
However, more even danger soon appeared in the unlikely form of a fellow Lanc rear gunner — the reckless and short-tempered Sergeant Tommy Deakin — and inevitably they clashed.
Fate soon intervened and they faced a threat neither could possibly have imagined — and they would just have to work together to survive.

Commando No 4950 – Master Spy
A good spy never gets caught. He tries to become so much part of the enemy set-up that he’s never even suspected…until it’s too late. And, even then, the best of the breed always have an escape route — even although it’s back into the lion’s den!

Introduction:
I’ve always maintained that espionage is fairly difficult to tackle successfully in comics because, as a genre, it tends to involve lone characters telling us what is going on in their heads via lengthy thought balloons.
However, author Alan Hemus takes advantage of our 63-page format to give us an excellent set-up and back story for our hero, Georg Hofmann. We get a chance to see what motivates him to risk his life as he works under deep cover amongst an insidious enemy.
Master Spy has a great script and art, all perfectly topped off by Ian Kennedy’s stunning cover.
Scott Montgomery, Deputy Editor
Master Spy, originally Commando No 2489 (July 1991)

Gosh! I remember the Golden Gun when it was originally released as it was around the same time as the James Bond movie 'The Man With The Golden Gun' was out. I would have been around nine at the time and I recall being disappointed that the issue wasn't about James Bond!