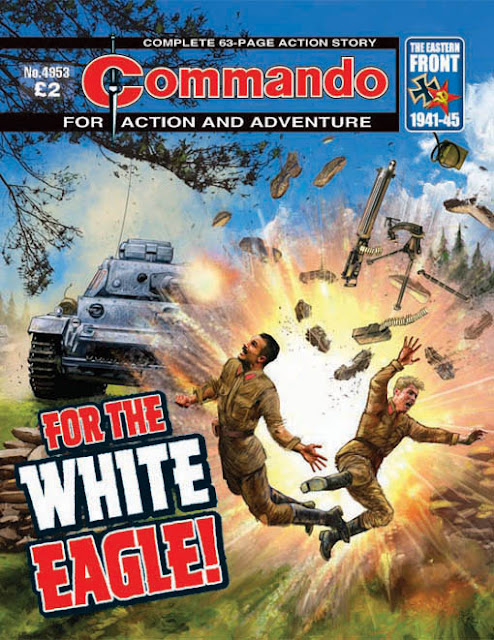 Reliable as ever, here's the press release from D.C. Thomson for the four issues of Commando that will be on sale from tomorrow. (If only more mainstream comics sent out PR material like this, then perhaps more people would be aware that the British comics industry is still around!)

Commando No 4951 – Battle of the Black Crow
The Black Crow was a pirate ship, sailing the seas south of Cuba and tussling with Navy vessels from many different countries.
Two young crewmen, Flinn Scott and Charlie Reeves, longed to jump ship — as they missed their Scottish homeland so much. However, soon came the chance to get their hands on some treasure — but they were not the only buccaneers interested. The Tartarus, a British privateer ship and its captain would destroy anyone who got in their way of their haul.

Commando No 4952 – Atlantic Killer
A swift trail of bubbles — if you see it and a roar like a thousand express trains crashing — if you hear it. That’s all the warning you get when a torpedo hits home.
Lieutenant Commander Dave Miller lost his destroyer just like that to Kapitan Karl von Sturm, top Nazi U-Boat ace known as the “Sea Wolf”. The way things were going, Dave was liable to lose another ship…unless he got to the “Sea Wolf” first.

Introduction
This is a tough, sea-faring tale which has a personal vendetta between two arch enemies at its heart. Veteran interior artist C.T. Rigby draws maritime action incredibly well — his thick lines are almost like the inky depths of the Atlantic itself and are wonderfully atmospheric, especially whenever a U-Boat is submerged.
The late, sadly-missed Ken Barr also provides a dynamic cover illustration which does its job perfectly — giving the reader a solid indication of the action contained within the book’s pages.
Scott Montgomery, Deputy Editor
Atlantic Killer, originally Commando No 260 (May 1967)

Commando No 4953 – For The White Eagle!
The Order of the White Eagle was Poland’s highest military decoration. Captain Janusz Libarcki wore his medal with pride as he fought the Red Army and the Germans during World War II, even though he eventually became a prisoner-of-war.
However, when Germany turned against her Russian allies, Polish prisoners such as Janusz and his lieutenant, Lech Szost, became conscripts of the Red Army on the horrific Eastern Front. It seemed that their brutal Russian officer despised them as much as he did the Nazis. Nonetheless, the Poles were determined to honour their fallen comrades and their homeland…
FOR THE WHITE EAGLE!

Commando No 4954 – Deadly Triangle
Shooting up unsuspecting British trucks in a captured Hurricane was just one of the dirty tricks played by Erich von Werner — a pilot hated by his own men as much as by the British.
The feeling was mutual, particularly for Luftwaffe pilot Carl Lutz and Ted Bull of the R.A.F. — two men linked by fate to Werner to form a strange and deadly triangle.

Introduction
This rollicking air story sets a fair pace and I’m sure it might hold a record for the amount of times that any of our three main characters have to abandon their aircraft and bail out after a dogfight. It’s just as well that interior artist Jose Maria Jorge was such a master of aerial action and I imagine that this script would have been tailored specifically for him. His attention to detail was astounding and many other Commando artists were huge fans of his wonderful work.
The same thing can, of course, be said about our equally legendary cover artist, Ian Kennedy — who delivers yet another action-packed, dynamic illustration.