Return of the Third Doctor 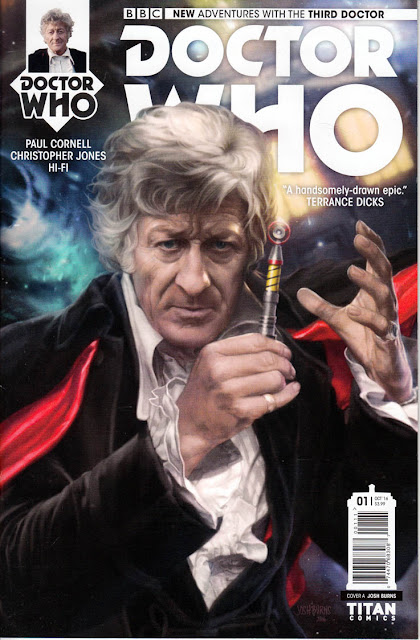 Although I was watching Doctor Who on TV pretty much from the start (at least as early as episode 5 and the arrival of the Daleks), it was the adventures of the Third Doctor that seemed to resonate with me more. Perhaps it was because I was older then (around 12) and the Earth-based stories had a more realistic edge than previous seasons, but I think it was mainly because of the superb chemistry between the cast. Jon Pertwee's confident Doctor had a great screen presence, and when teamed with the spirited, warm natured Jo Grant (played by Katy Manning, probably my first crush) and the UNIT officers (along with Roger Delgado's superbly menacing Master) it made for a very likeable show indeed.

This was also the time when the Doctor Who comic strip became more sophisticated too of course, moving from TV Comic to the new Countdown weekly. The ideal Saturday back in 1971/72 was reading the latest Doctor Who strip, then tuning into the BBC for the current TV episode. Two different adventures to delight us every week.

I was very pleased therefore to see that Titan Comics have brought the Third Doctor back to comics with the release of a new monthly title. Paul Cornell is a great choice as writer, knowing the series inside out and having contributed scripts for the TV show. He's picked up on the Third Doctor's style of dialogue perfectly and I could well imagine Jon Pertwee speaking the lines in the comic. The other cast members are here too; Jo Grant, Brigadier Lethbridge-Stewart, Captain Yates, and Sergeant Benton. The story (which takes place after The Three Doctors TV story) feels right for the era, and is nicely paced. And that cliffhanger! Wow! 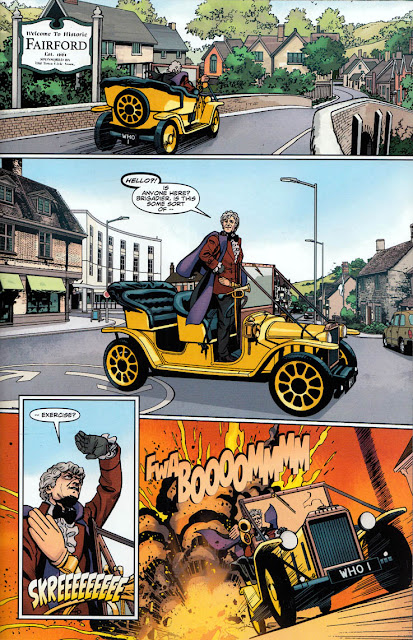 The artwork is by Christopher Jones, whose visuals tell the story fluently and engage the reader. The artists who drew the strip in the 1970s, Gerry Haylock and Frank Langford, are hard acts to follow and while Jones doesn't always quite capture the exact likenesses of the actors in every panel (never an easy task) the quality of his work can't be faulted.

Titan are producing a tremendous number of titles these days, proving that there's still life in the UK comics industry. It's good to see another comic added to their roster and I hope Doctor Who: The Third Doctor receives the success it deserves.

Visit the Titan Comics website to see their full range of comics:
http://titan-comics.com

As well as the standard cover by Josh Burns shown at the top of this review, there are also five variant covers, including these superb ones by Boo Cook and Andy Walker... 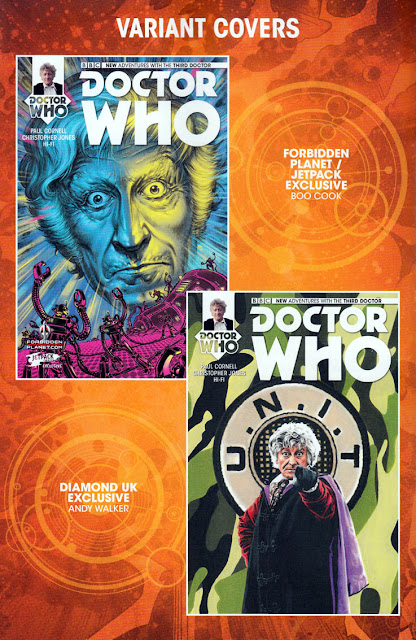 The Jon Pertwee version is one of my top three (along with Peter Davison and Sylvester McCoy) of the original series. It is nice to see him get his own book. Here is hoping that Sarah Jane will make an appearance at some point in time, as well as his first assistant, whose name eludes my memory at this point.

That was Liz Shaw. I think this comic is probably a mini series to test the waters but it'd be nice to see it ongoing.

Don't often pick up Doctor Who comics these days but couldn't resist this one. Wonderful stuff. Manages to capture everything people love about the Pertwee era in just a few pages.

Strangely,since we're almost the same age, my reaction to the 'new'Doctor was almost opposite -
I was a bit young to appreciate Troughton who seemed crazy AND a bit scary, but I loved Jamie and Zoe and the especially the alien settings. The Pertwee years I liked less and largely BECAUSE they were restricted to Earth; the military aspect was too mundane and the yellow vintage car Bessie embarrassing. Not sf enuff for me !

My favourite became and remained the Fourth Doctor who was just MAD but cool, and kept me and my pals watching even though by then we were a bit old for what was still considered kids tv.

Jon Pertwee's 3rd Doctor was the one I remember watching as a small kid. He was also my favourite. In fact, I having been listening to the new 3rd Doctor's adventures from Big Finish which I really enjoy.

I hope Titan will repeat his strips in Tales of the TARDIS.

Colin, I'm afraid I found the Second Doctor a bit silly at the time, although I did watch most of his stories and particularly liked the Cybermen ones. As for Tom Baker, I actually stopped watching the show for a while when he took over as it seemed to be heading into "silly" territory again. I know, I missed all the great episodes! I did see some of them though: Genesis of the Daleks, Talons of Weng-Chiang being particular favourites.

It'd be good to see the Third Doctor in the newsstand edition, Sid, although as they've avoided running the Fourth Doctor stories so far it looks unlikely.

Someone on Gallifrey Base has actually asked Titan and they said no plans for the Eighth, Fourth or Third Doctor stories to appear. Confusingly though, they just said Ninth and Torchwood are ongoing, no mention of whether they'd ever be in Tales from the TARDIS.

"The Ninth Doctor and Torchwood are ongoing. The Eighth, Fourth and Third Doctors will not be printed in the UK. Thanks"

Picked this up via the Amazon kindle. What a brilliant book. Both story and artwork are excellent. Very nostalgic looking back to the days of the 3rd Doctor, UNIT, the Master etc. Thanks for reviewing it Lew. I think I'm hooked.