TANK GIRL is back again! 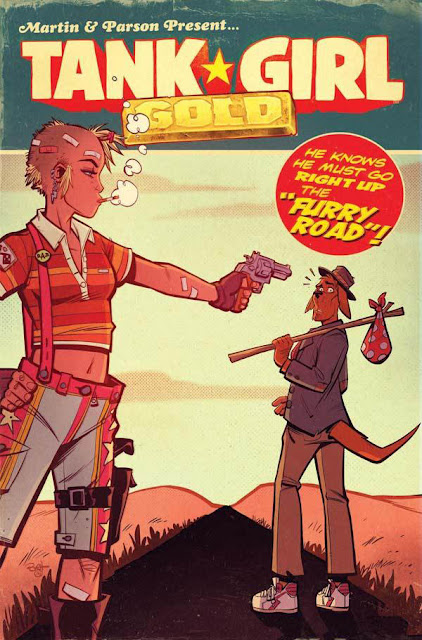 From the comic's publicity: Picking up where the critically acclaimed hit series Two Girls One Tank left off - Tank Girl has lost one of her dearest friends, but inadvertently gained billions of dollars worth of Nazi Gold. What is she going to spend all that money on? Before we find out, her kangaroo boyfriend Booga must pay a penance by going right up THE FURRY ROAD. It's been swell, and the swelling isn't going down.

Tank Girl: Gold No.1 will be available from comics speciality shops and online sellers from Wednesday 28th September.

As most of us know, most of today's new British comics aren't available from newsagents due to the restrictive costs involved etc, but you will find various titles in comic shops and on sale at the numerous comic cons around the country. Titan Comics themselves publish a huge number of titles originated in the UK. Their few DC reprint comics are in WH Smith but the majority of their output is direct-sale only (comic shops). Admittedly most are Doctor Who titles but if you're a Doctor Who fan you've hit the jackpot. Below are this months covers from http://www.titan-comics.com

These comics shouldn't be dismissed just because you can't find them in Asda or Smiths! So believe your eyes not the hearsay of those who spread misinformation that "the British comics industry is dead". Circulation figures are far lower than they were 50 years ago but there's life in UK comics yet. Even if Titan's output doesn't appeal to you personally there are loads of other independent British comics around with various themes and styles so you should find some that float your boat. Keep the faith and support British comics!

So. This big British comics industry you keep banging your little drum about is nothing but sweet FA.

Every sentence of your comment is complete codswallop. Those comics feature new material, mostly by UK creators. Not US reprint. Do your homework.

I think that Anon mixed up the newsstand Tales from the Tardis Doctor Who Comic title with the comic shop floppies you was actually talking about. TFTT is reprint, but of course, not AMERICAN. In fact, the current TFTT has a Twelfth Doctor story that was only published four weeks ago in it's standalone format.

I haven't mixed it up!

Do your research. The Doctor Who comics are published by IDW an American company.
Titan reprint them.

There IS NO British comic industry.

No. IDW used to publish Doctor Who comics but a few years ago Titan got the licence instead and have been producing their own, mostly by British creators. I suggest you do *your* research.

I really don't understand why people like you get so prickly whenever anyone mentions the current UK comics industry. Any genuine fan would be happy to promote it, not tear it down and pretend it doesn't exist.

Yeah, the only reprinting of IDW material Titan has done has been in the form of rather thick trade paperbacks called Doctor Who Archives. All their monthly comics are their own.