Lost (and Found) In Space! 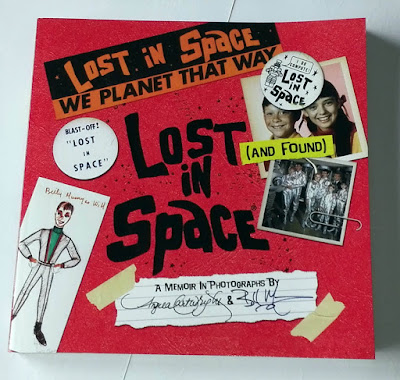 I hope you'll forgive this brief diversion from comics but I know some of you will be interested in this. Popular 1960s TV show Lost In Space returns to British screens tonight with the first episode airing at 8.00 P.M. on the Horror Channel, then every weekday night at that time. If you're not familiar with the show it's about a family of space travellers who become stranded on a distant world, encountering new dangers and increasingly bizarre aliens every week. Will the Horror Channel be repeating the whole three seasons? Will they show them in order? Tune in to find out!

With the show back on TV it seemed a good time to give a plug to this great book, Lost (and Found) In Space, which was published last year. It's an affectionate memoir of the show by two of its stars, Bill Mumy (Will Robinson) and Angela Cartwright (Penny Robinson). The 200 page book features loads of behind-the-scenes photographs and anecdotes you won't find anywhere else. 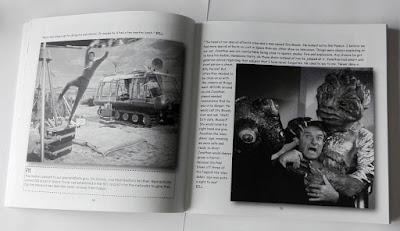 Lost In Space was a must-see programme when I was a child, and again when it was repeated when I was in my mid teens. I bought the DVD box set a few years ago too. Produced by Irwin Allen, it was the sort of warm, family-friendly show that is rarely made these days. The first season was in black and white, with seasons two and three in full colour. 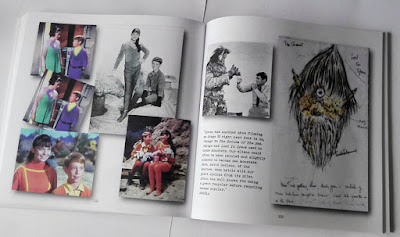 Bill Mumy and Angela Cartwright's book reflects the enjoyable, lighthearted tone that the show had, and it makes for a very pleasant and absorbing read. These days, Bill is a talented musician (http://www.billmumy.com) and Angela a talented artist (http://angela-cartwright.com). It's heartening to know that over the years they've remained good friends, and the memoir of their time on Lost In Space is an essential purchase for any fan of the show. 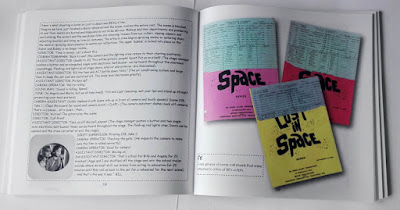 You can buy Lost (and Found) In Space directly from their website:
http://lostandfoundinspace.com

...or purchase the softback from UK online sellers at this link.

Email ThisBlogThis!Share to TwitterShare to FacebookShare to Pinterest
Labels: Lost In Space

Thanks, Lew. Thanks to your heads up, I was able to set up my Sky Q to record the series.

Though not in the same league as Star Trek, I liked the first series. After that it got a little too space campy for my tastes even as a young boy. I preferred Voyage To The Bottom Of The Sea and Time Tunnel. Also every other alien was a silver man/woman (an obsession which carried over to Irwin Allen's other programmes).

Highlight of the first series: When the robot had a face-off with Robby the Robot (Forbidden Planet).

Yes, it's an acquired taste after a while. I'm not sure how well it'll be received now they're showing five episodes a week. Nice show though. I think I preferred it to Voyage. I found Time Tunnel a bit too po-faced even as a kid so I've never watched that since I'm afraid. I liked it for a while though.

well i thought i wouldn't like it after all this time but the first episode wasn't so bad after all.

Doctor Smith really made the show for me and if I remember correctly his character sort of changed from the ruthless spy to a more comical coward.

Good to see it back on TV though.

On another point its interesting how they don't broadcast Tarzan with Ron Ely any more. Used to love that show.

The original unaired pilot didn't have Doctor Smith in it, or the robot, but it was then changed with new scenes added in the broadcast version. How different the series would have been without those characters!

qamar, I personally think that the first few episodes of LIS were the best of the entire programme. I thought Doctor Smith as a sinister character was great. But as the series progressed, he became a squealing buffoon whose sheer incompetence caused most of the Robinsons' problems.

Saying that, Smith and the robot were my favourite characters. The Robinsons and West were so bland in comparison and although I don't condone violence, as a kid I did want to give Will a slap for being such as smart arse.

I didn't know there had been an unaired pilot, Lew. However, I happened to have the box set of the first series which also contained it which I just watched. I liked it (though would they have allowed 9 year old boy to run off to face a giant?).

I think the series was better with Smith and the robot. If only it hadn't got so damn silly.

It did get too silly at times but it was entertaining, which is what it's all about. I saw LiS as the gateway to Irwin Allen shows, with Voyage as the next step for slightly older viewers. I still prefer Lost In Space though.

Sid
i'm going to watch the shows and see how long before i start switching off :)

Great shows. All of them.

One question: I don't remember seeing any of Irwin Allen's shows in any UK comics. Is that right? Gerry Anderson's shows had their own comics. Gene Roddenberry's Star Trek appeared in TV21, Valiant and TV Comic.

A strip for Land of the Giants had a long run throughout the run of JOE 90 TOP SECRET and into TV21, Sid. The best thing about the JOE 90 comic, I thought.

Thanks, Lew. I would have thought that the others would got into print (or at least reprinted US strips). I wonder why not?

TV Tornado had a Voyage strip I think, or a text story. Over in the USA, Gold Key published comics based on Voyage and Land of the Giants. They also had a Space Family Robinson Lost In Space comic, but bizarrely a completely different Robinson family to the TV show, and different look etc. (Some reprints appeared in TV Tornado.)

Well I have watched the first three episodes and I am loving it. Especially the cliffhangers. Straight out of comics.

The cliffhangers are inspired by the 1930s movie chapter serials such as Flash Gordon but I thought they were great too. Later on, it becomes obvious the cliffhangers are nothing more than the first few minutes of the next episode but it's still a nice touch.

I wonder what refrains the makers from giving Robinson's family a new costume in every season? It is obvious, not everybody is gonna like to see their favorite characters in the same costume again and again. This does not mean, I dislike Lost in Space Season 2 Jacket, but rather it indicates the fans expect a change.