Nemesis the Warlock back in print 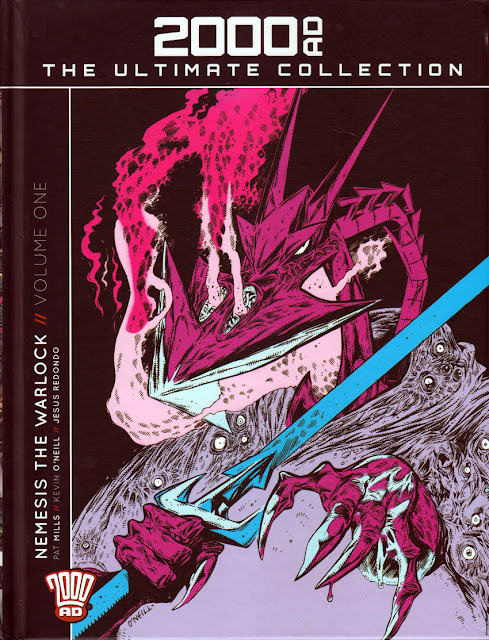 The fifth and latest book in the partwork series 2000AD The Ultimate Collection is Nemesis the Warlock Volume One, by Pat Mills, Kevin O'Neill, and Jesus Redondo. It was a joy to find a copy in my corner shop today and I plonked down my £9.99 for this splendid hardback without hesitation.

These early Nemesis the Warlock stories have been a firm favourite of mine since their debut in the 1980s, and Kev O'Neill has been one of my favourite artists since then too. I already have the stories in softback, but I couldn't resist this fine hardback. The only drawback is the page size is a bit smaller than its original publication in 2000AD, but the pin-sharp reproduction makes everything clear so that's not a problem. 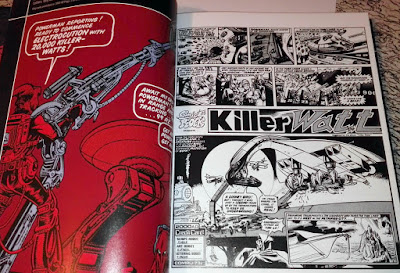 Nemesis the Warlock was the most bizarre and fascinating series to appear in 2000AD back in the early 1980s. Set in an oppressive future where the dictatorial, bigoted sadist Torquemada rules over the Terran empire, opposed by freedom fighter (or terrorist if you prefer) Nemesis, an alien. Yep, we're asked to root for the aliens and despise the humans, - and it works. That's just a brief summary, and it's more complex than that, especially as the series develops, but Nemesis the Warlock is an incredible story that well deserves a place on anyone's bookshelf.

With Pat Mills as the writer, you can't really go wrong, and coupled with Kevin O'Neill's darkly comic, spiky artwork, it's a winning combination. Kev was always a big fan of Ken Reid, and you can see some influences here, even though Kevin has a distinctive style of his own, and he takes that black comedy into even more twisted and glorious directions. 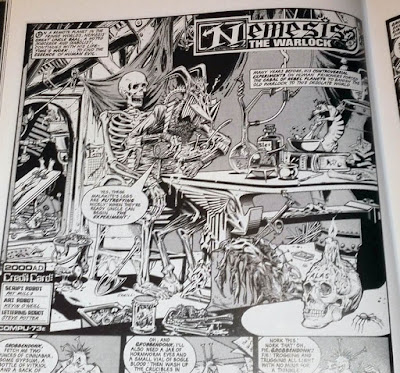 This new collection reprints the first three series of Nemesis the Warlock, plus the early strips that introduced the characters. In case you didn't know, series two is drawn by Jesus Redondo. It's quite a departure from Kev's work, but Redondo is a top class illustrator in his own right so it's worth including here. 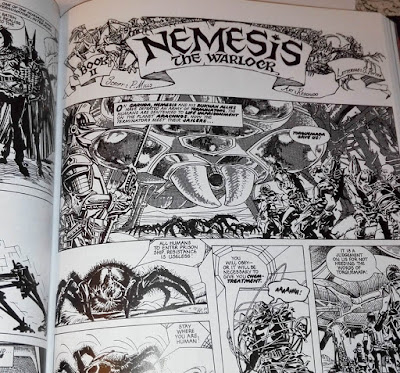 Nemesis the Warlock Volume One also includes an article on the series as a back up feature, complete with full colour reproductions of Nemesis' cover appearances on 2000AD. It would have been nice to have seen these covers reproduced one to a page instead of small size, but the reproduction is clear enough.

If you've never read these first Nemesis the Warlock stories, treat yourself to a copy of this book. You should find it in WH Smith, newsagents, and comics speciality shops, or you can subscribe to the partworks here:
http://www.2000adcollection.com
Posted by Lew Stringer at 21:52

Anyone know if this us the same as the recent use deviant edition???

The one that came out four years ago? No, that was in colour, and reprinted the Titan Comics series that had extra panels drawn by Kev O'Neill so it fit American comic proportions. This one is in black and white and reprints the strips as they originally appeared in 2000AD.

Looking forward to giving Nemesis a chance. It's a series that I never really got, nor liked much.

Was only an occasional buyer of 2000AD throughout the original run of the series, and it's not the kind of thing that lends itself to jumping into the story six parts in, then again two months later, so my reaction to it tended to be "what the hell is going on?" (only more sweary).

Nice, relatively cheap way to start right from the beginning.

Unrelated; how was Loughborough? Grew up there and had hoped to combine popping into the comic convention with a nostalgic potter around town, but lack of a child minder stymied the plan.

Loughborough was a bit quiet for us comics artists, as I think most attendees were there to see the cosplayers. These events are always worth doing though, and can't be predicted.

I'd be really interested in this whole series if it wasn't for the artwork spine. I can't help but think it'd look really tacky on the bookshelf.

You could always keep them in a box instead. I have more books than bookshelf capacity so that's what I do.