The appeal of the Rupert Annuals 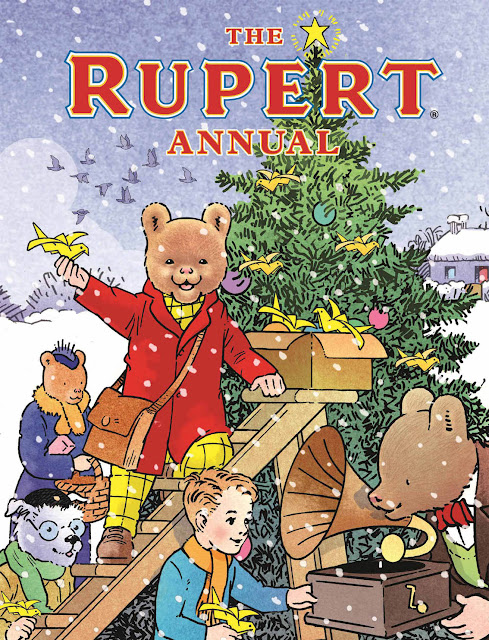 Here's the cover to the new Rupert Annual that no doubt thousands will be having as a Christmas present. The book has been published since the 1930s but I must admit... I've never read one. Rupert appeared in the Daily Express, which wasn't a newspaper we ever had in our house when I was growing up, so I didn't even know who the adventurous bear was.

By the time I began to notice the Rupert Annuals I probably felt I was too old for them. It looked more like a nursery comic, and I was drawn more towards Marvel Comics, TV21 and Smash! so I never gave Rupert a second thought. I remember Bob and Terry discussing the annuals in an episode of Whatever Happened To The Likely Lads, and I think I saw a few episodes of the Rupert TV series, but that's as far as it went.

I'm not likely to get enthusiastic about the character now at my age, but maybe I should try one of the books to at least see what the appeal of the strip is and to look at them with a professional eye. No doubt many of you will be familiar with the character, so my question is... what attracted you to the stories? Do you still collect them? Let me know your thoughts in the comments below...
Posted by Lew Stringer at 10:30

Email ThisBlogThis!Share to TwitterShare to FacebookShare to Pinterest
Labels: Rupert

During the 60s I received a Rupert Annual from my Uncle George every Christmas. I suspect he chose this present for me because he worked for Express Newspapers and he probably got the annuals at a discount price. I never read the books, as the stories of fairies, elves and goblins seemed completely soppy, and the picture-with-text-underneath format appeared very old fashioned to me (sorry Uncle George). I did however send my uncle a thank you letter every year. Mum and Dad made me send thank you letters to all the providers of my Christmas booty as was the custom in those days.

I used to get these in the 60s for Xmas as a child but sadly they were all thrown out. I started collecting the new ones each xmas in the 80s and have kept buying them each year as well as collecting the numerous facsimile editions of the early annuals. I just love the fantastical stories the characters and the artwork especially by Alfred bestall

Tery Jones can probably explain it better than me.

Didn't read the comics but used to watch the tv programme when i was off sick from school. Not sure why though because I found the puppets a bit creepy. Actually I know why because there wasn't many channels to choose from lol

Great question Lew! If you go to the Book Fairs at the Royal National Hotel every month there are always Rupert annuals for sale, and along with Mickey Mouse, Rupert seems to have big appeal to people of a certain age that nothing else seems to match (much rarer to see e.g. Beano or Dandy there). No idea what the appeal is, but it's definitely a phenomenon! Paul Macartney is a big fan, of course. I wonder, though, if Rupert fandom will disappear in not so many years - or does the annual still sell well?

I was given Rupert annuals as a small child - my mother had always been given one at Christmas - and cherished them. When I discovered the reproductions printed each year alongside the new annuals I was moved to start buying up those and old copies I found in charity shops.

For me the appeal has always been the art. They are beautiful things. Linked to that is the sense of a magical or fantastical, yet accessible land. For Rupert everything from Santa to dragons is just over the hill and he could be home with Mum for tea. That aspect echoed my life, but our post-industrial, grim Scottish home town was nothing like rural, always sunny Nutwood. Much as I liked the books, I found the TV series annoying, perhaps because it had none of the beauty of the books.

I have never been much bothered by the text, indeed often find it annoying with almost every sentence ending with an exclamation mark, but the plot is almost always obvious from the images anyway. Then there's those wonderful covers and end papers. Those were doorways to another world in themselves.

So my suggestion is read them somewhere warm and comfy on a cold, blustery day (they always seem like winter things to me) much as you'd settle to watch an old British movie and let the artwork take you on an adventure.

Interesting replies. Thanks, everyone! I might treat myself to one of the facsimile editions to get the old style flavour of the originals.

Yes, Srew, presumably the books still sell well as its one of the few traditional annuals still going. Whether they'll appeal to me or not I'm glad they're still being published.

Rupert was actually a MARVEL UK title for a while. Twice.

And again, a decade or so later, here:http://starlogged.blogspot.co.uk/2017/03/1991-marvel-uks-rupert-and-friends.html

The first series ran for 100 issues and incorporated WORZEL GUMMIDGE (launched as a TV tie-in monthly... then relaunched as a weekly without the overt links to the now-defunct Southern TV series) somewhere along the way.

I loved the theme-song from the TV series :)

I'd forgotten about the Rupert Marvel comic. I remember now that I bought an issue but didn't care for it.

No Rupert in your childhood? Someone should have called social services. I had the 1971 annual. I remember it as really good. You could just read the captions or the more comprehensive text beneath.

And the seventies TV show was great.

And as no one has mentioned the infamous NWS OZ Rupert parody I will...

I think Rupert is an acquired taste. Having grown up on Smash! and The Dandy, Rupert seems very middle class and polite. I'm sure it's great for those who grew up with it, but it's not going to be a purchase I'll make soon. I'd actually forgotten I'd read some strips in the 1990s Marvel comic so I can't have been that impressed by it.

Thanks for all your comments though. Very interesting.

Agreed. I think Rupert is one of those strips that unless you pick up at the right time as a very young child and create that link, then he will never really appeal (even if intellectually you appreciate the quality).

With me, Rupert was read to me at first. At the same time, my father would tell me stories and often teamed Rupert up with his characters. Good memories.

Memories like that are always precious and worth holding onto. Thanks, Sid.