Have you bought your COR!! BUSTER special yet? 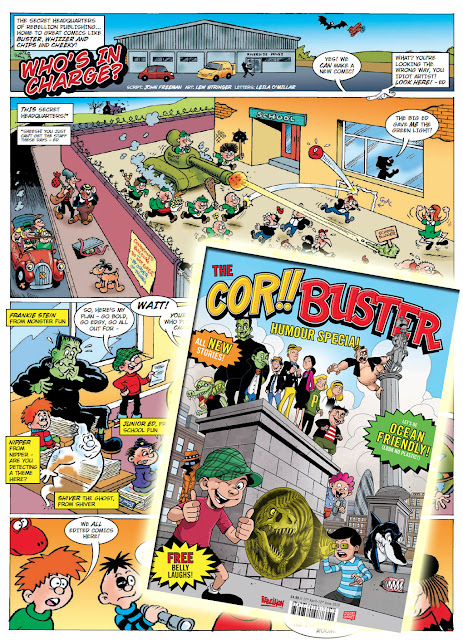 Still on sale foe a couple more weeks is the Cor!! Buster Humour Special, with 52 pages of all-new strips bringing back the classic characters of yesteryear! It was a pleasure to work on this comic and I hear it's selling well so let's hope it leads to more next year!

The special is on sale in WH Smiths, and various newsagents and comic shops (if they've ordered it!). If you can't find one if your area, don't worry! You can order it directly from the publishers here:
https://treasuryofbritishcomics.com/catalogue//RCS1951D

I'm glad to hear that this has been selling well. I hope it leads to more of the same : either an annual (quarterly?!) special, or maybe even a regular monthly comic. Fingers crossed!

I'm guessing we'll have to wait a year for another special, which is what happened with Scream and Misty, but you never know! A Christmas special would be nice but the publisher may have allocated their budget for specials this year.

I enjoyed it but.. some mixed feelings about some of the takes on some characters.. as I might be missing some of there later evolution, but some of the overhauling didn't quite sit right with me, but I wasn't the target group ^_^ and like I said, overall, I enjoyed it.

Yes, some versions may seem a little jarring to older readers who grew up on the originals but for the young generation it's aimed at this will be their first exposure to the characters. They could have just used artists who draw in the classic style but Rebellion wanted to make it distinctive from The Beano, which makes sense.

Overall I think it struck a good balance and it was nice to see a variety of styles in there rather than a house style.

I really liked it although I agree some revamps didn't work but I think I got what they were trying to do, I'd actually have gone further and would have made some of them more "American" (howls of protest) like Stanleys Monster in US a while back (along with traditional UK art). I especially liked the all ages 2000AD.

I'm looking forward to seeing what they do with the Tammy and Jinty Special which will replace this one on the stands in a few weeks' time.

If I could find it over here in Canada I would definitely get it.

It was listed in Diamond's Previews catalogue so comic stores in the USA and Canada had a chance to order copies.

You could order it from the link I provided, but I guess that'd be too expensive?

Our comic store in town only orders what it thinks it can sell, and Rebellion product doesn't sell here. Also the Diamonds catalogues for the UK and North America are different. I get both the US and UK weekly emails and there is always stuff in the UK one not in the US one.

I liked the various different art styles. I find the Beano's "house style" pretty tedious : all the stories look the same, with the exception of Calamity James and The Numskulls. (But with the Beano these days, all the stories/characters ARE the same! Bring back The Three Bears and Baby Face Finlayson!) It must be difficult and restricting for the artists not to be able to do it the way they'd like. Imagine the likes of Ken Reid and Leo Baxendale putting up with that!

Bought not just one but two (one for my granddaughter). She liked it.

Admittedly I am mixed on some of the styles but this for the generation of 2019 so fingers crossed.

It's not restricting at all, Kevin. That's how we draw! I think Leo would be fine with it, considering he instigated that style in the 1950s. :)

John, how does your store know that no Rebellion book or comic wouldn't sell? Customers don't always ask. They might look around, not find the books they want, and walk out.

That said, I can appreciate that the sheer amount of product Marvel and DC pump out tends to tie up retailer's money.

They have brought in Rebellion product in the past only to have it sit on the shelf. Due to financil matters I only buy the occasional item these days.

Have to admit, the title ("Humour Special") sounded a bit North Korean, and the 'realistic' rendering of characters on the cover made them look a bit, well, dull.

On the other hand, many of the strips were good, and the updates to the style were both effective and timely, though I had the feeling some artists were still getting to grips with the 'fun factory' vibe. Grimly Feendish could have had a longer strip, too.

So, would I buy it again? Yes - there's promise here, and I'd gladly buy another special. Just not with that rather po-faced title...

Personally I'd have gone for impact and called it SMASH! but Buster has a longer legacy. Perhaps simply Buster Summer Special would be preferable?

You can't go wrong with a Summer Special. Preferably a Bumper one.

(As an aside, Misty drinking - ahem - 'tomato juice' was a nice touch!)

How about Cor!! A Buster Special.

Credit to John Freeman for the Misty tomato juice gag.