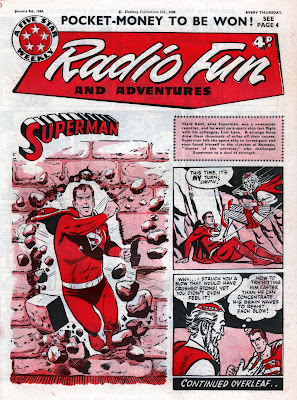 Numerous British publishers have tried making Superman work in UK comics, with varying degrees of success. The first such venture was in Triumph in 1939/40, he had his own reprint title in the 1950s, there was the short-lived Super DC in 1970, and various attempts from Egmont and Titan in more recent decades. Back in 1960 however, British comic readers could marvel at the exploits of Superman in the pages of Radio Fun weekly.

The strip had a relatively short life in the long-established AP/Fleetway comic, only appearing from 1959 to 1961. Even the planet-twirling Superman couldn't reverse the fortunes of Radio Fun which, after a highly respectable 23 year run merged into Buster in 1961. Superman became one of the strips which transferred to Buster, but the Man of Steel didn't survive there for long.

The Superman stories which appeared in Radio Fun were collated from the daily strip that appeared in American newspapers. The example shown here, from Radio Fun dated January 9th 1960, originally appeared in the USA from April to August 1958. In the story Superman encounters Romado, an alien with a computer mind who shows Superman the miniaturized Kryptonian city of Dur-El-Va which he keeps in a bottle. Sounds familiar? Around the same time, Action Comics No.424 (July 1958) introduced us to Brainiac, an alien with a computer mind who has the miniaturized Kryptonian city of Kandor in a bottle. 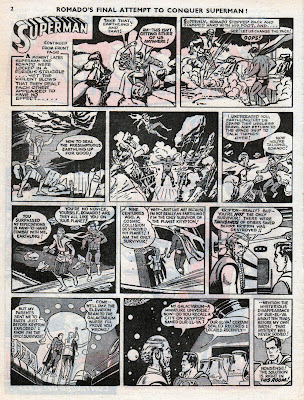 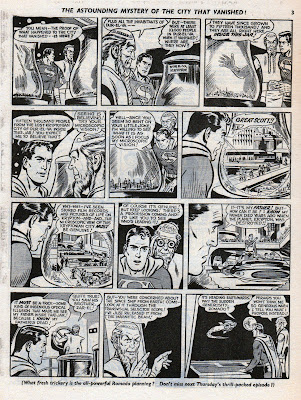 (You'll notice that some of the artwork and the lettering on the top half of page 2 of the issue doesn't match the rest of it so I suspect some redrawing went on to edit the strip for the Radio Fun version.)

Although Radio Fun during this period was clearly trying to retain the interest of readers who might otherwise be distracted by the glamour of American imports, the comic still contained traditional British fare as well, from The Falcon to Bernard Bresslaw. Here's a selection of spreads from the same edition:

On the back page, a complete contrast to the American icon on the cover. It's the very British icon Norman Wisdom, illustrated by the brilliant John Jukes: 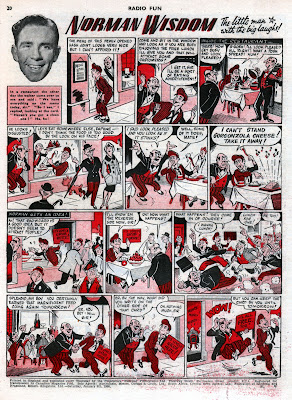 I agree. Where did you find those scans Lew? Did they have the complete story? I'd like to compare it to the Brainiac comic.

I did the scans myself from my own collection. I don't take images from other people's websites or blogs. (There's no point. They're already out there for one thing! Why repeat it?)

I don't have the full story, sorry.

A great post, Lew. I knew about Triumph (from one of Dennis Gifford's books I think) and Super DC (which I bought regularly) but had no idea the Man of Steel ever appeared in Buster of all places.

Superman's always looked out of place in UK comics - maybe it's the smaller panels and lack of colour. I think I first encountered him in Smash! towards the end of the Batman newspaper reprints, where he seemed tame in comparison to The Cloak or the Lee/Kirby reprints.

I've always been fascinated by the titles that were being published in the early years of my life when I wasn't reading comics. How could comics exist without me to buy them ?

Yes, Superman was just a single pager in Buster, in black and white. I'll post it here sometime.

Curt Swan art on the Supes strip, if I'm not mistaken.

Superman was of course a radio show in the States (not sure if those shows were ever broadcast in the UK). I've always wondered why Norman Wisdom, who was one of Britain's biggest film stars at the time, was featured in Radio Fun rather than Film Fun. Also Whacko, originally a TV series, began a radio version in 1961 (according to Wikipedia), the year after this issue of Radio Fun.

I suppose Radio Fun couldn't afford to limit its features to those originating from the 'wireless', it had to try to find popular features no matter where they came from.

Thanks for posting this rarity.

Yes, I suppose that, with radio losing out to the increasing popularity of television, A.P. and Fleetway used whatever means necessary to retain the readers of Radio Fun. (Sadly it didn't work.)

A Jimmy Edwards strip had appeared in A.P.'s TV FUN but that comic ended in 1959.

Any idea what number this issue was?

They'd given up on numbers by then but you can track it down by the cover date.