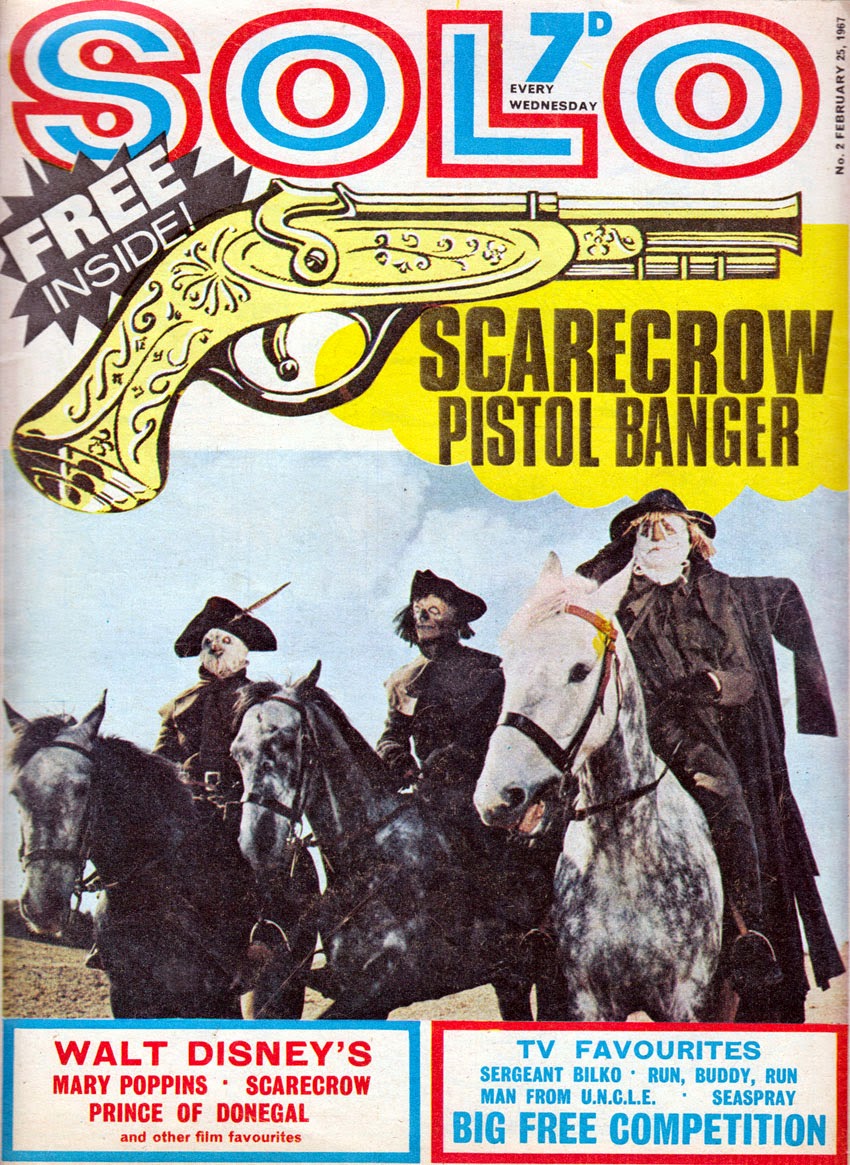 The 1960s were a prolific time for comics and many were selling in tremendous numbers. Some however didn't fare so well. One of those was Solo, published by City Magazines and Century 21 Publishing, which lasted just 31 weeks.

With the successes of TV Century 21 and Lady Penelope, City/Century 21 clearly felt confident enough to expand their line. They launched TV Tornado and the bizarrely unsettling nursery comic Candy in January 1967, swiftly followed by Solo a month later.

Solo was a bit of an odd mixture to begin with. Some of its contents were licensed Walt Disney strips, while the rest of the comic covered other TV programmes. This meant it contained things such as a strip adaptation of Disney's version of Mary Poppins... 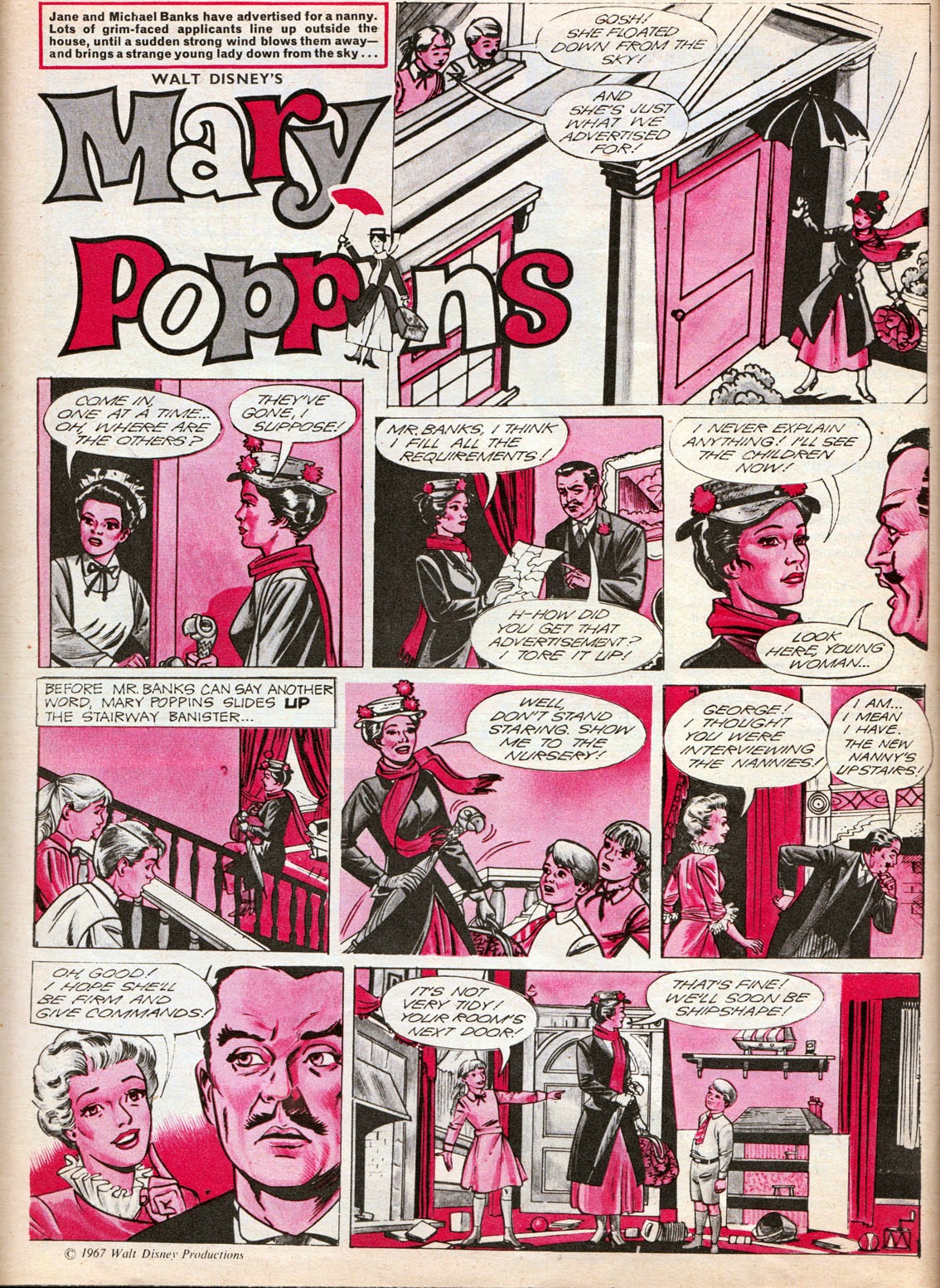 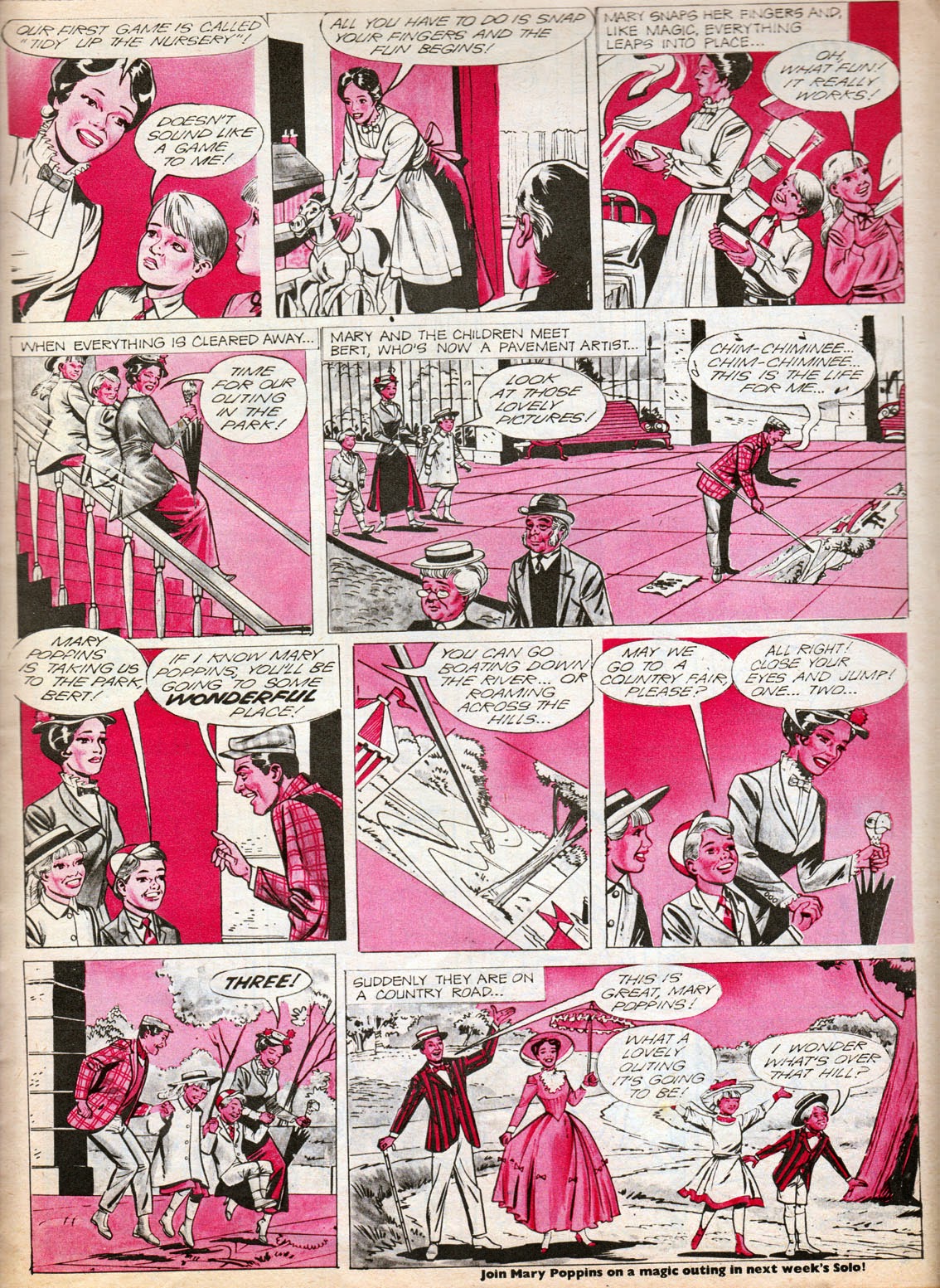 ...running alongside the adventures of The Man from UNCLE... 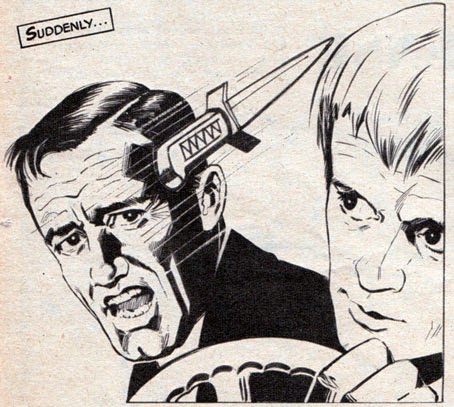 Two different target audiences in one comic. A recipe for disaster.

The main focus on the early issues was the inclusion of The Scarecrow, based on the new Disney TV mini-series starring Patrick McGoohan (shown in the UK as the movie Dr.Syn alias The Scarecrow). The full colour centrespread of the comic featured the comic strip drawn by Dan Spiegle, although I understand this was edited together from the American comic published by Gold Key. 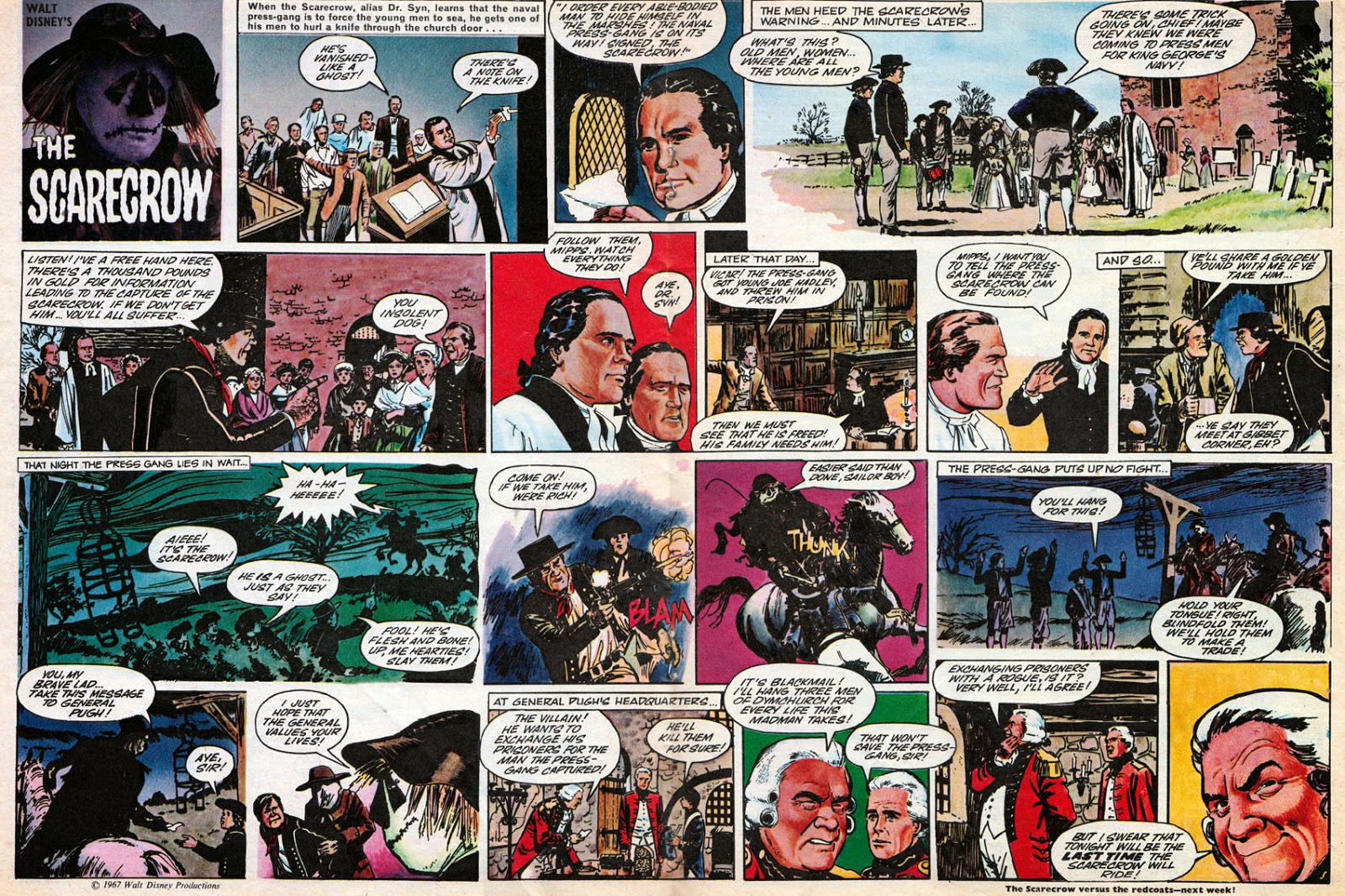 Solo also featured other reprints from American comics such as the Super Goof and Uncle Scrooge short stories. There were home-grown funnies too, with a Sgt.Bilko page drawn by Tom Kerr... 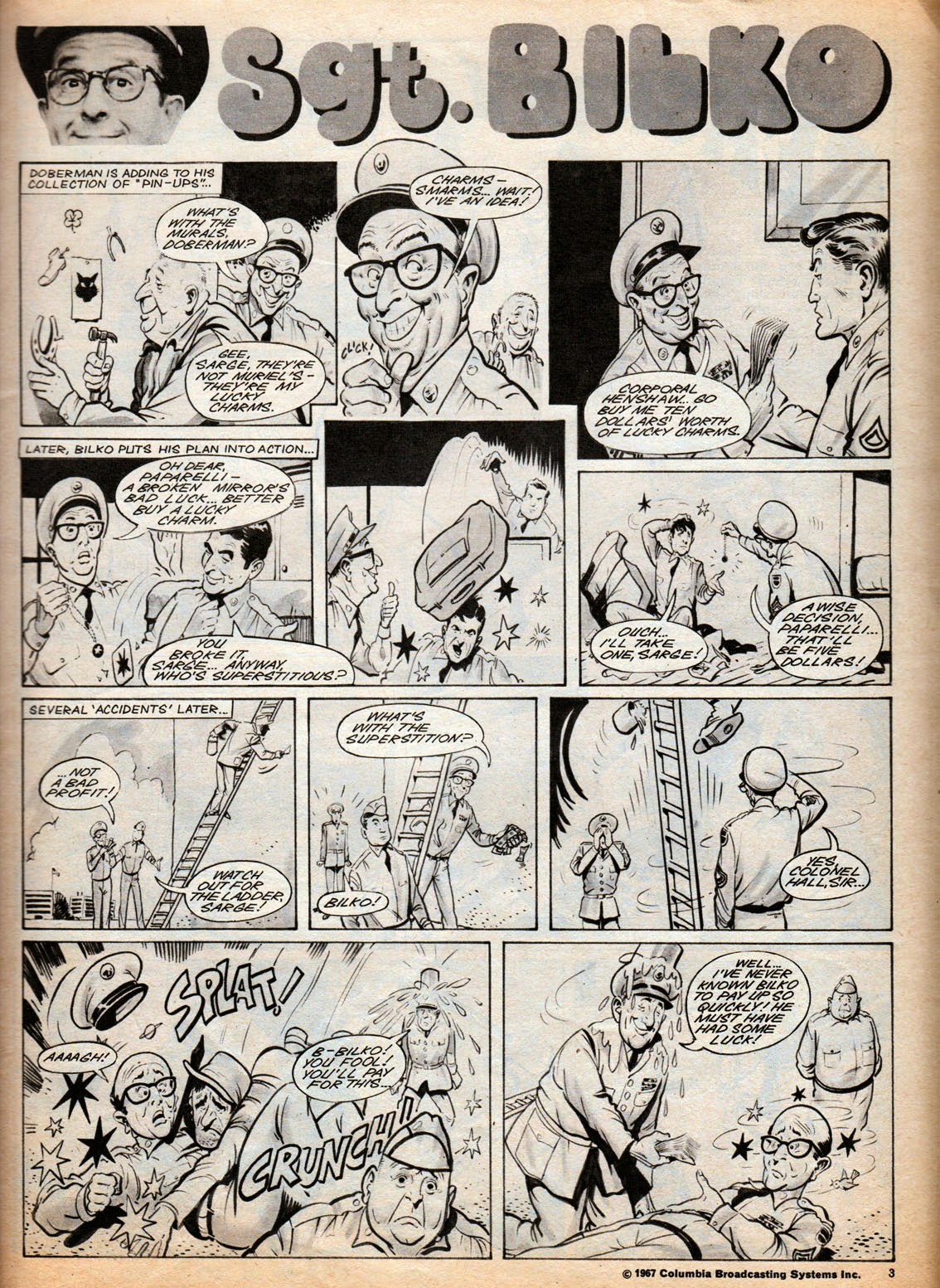 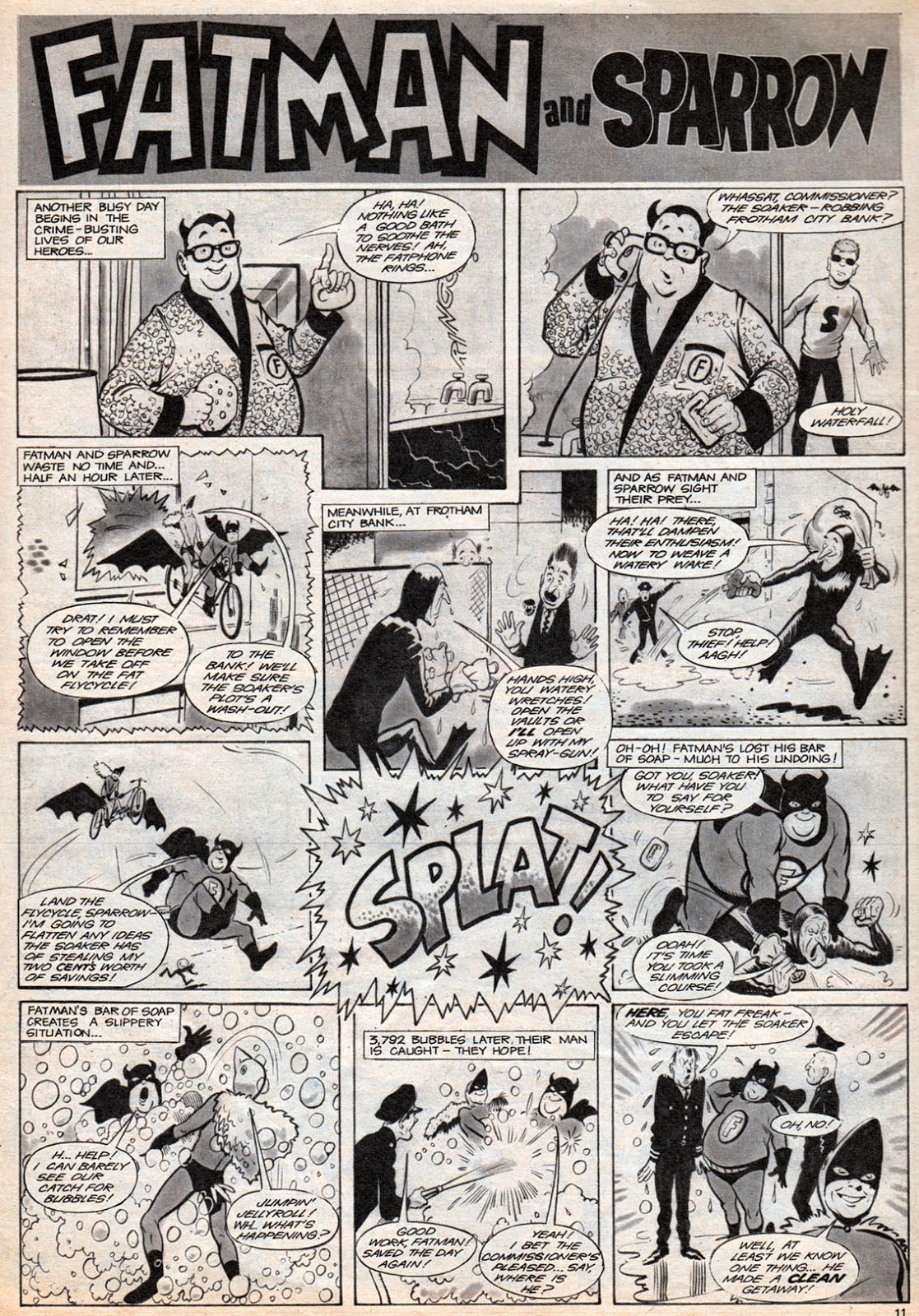 ...and a strip based on US comedy Run, Buddy, Run drawn initially by Reg Parlett! 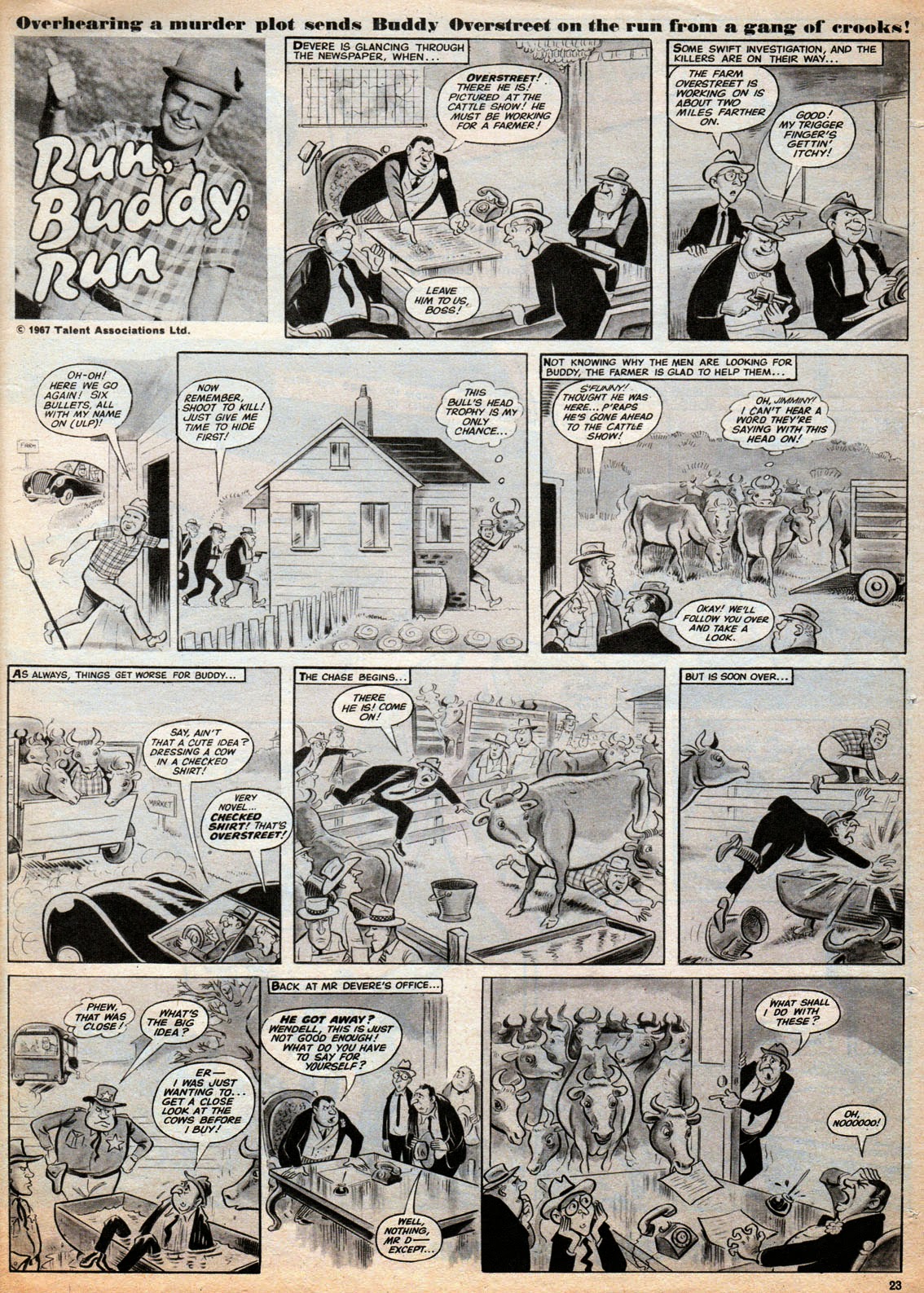 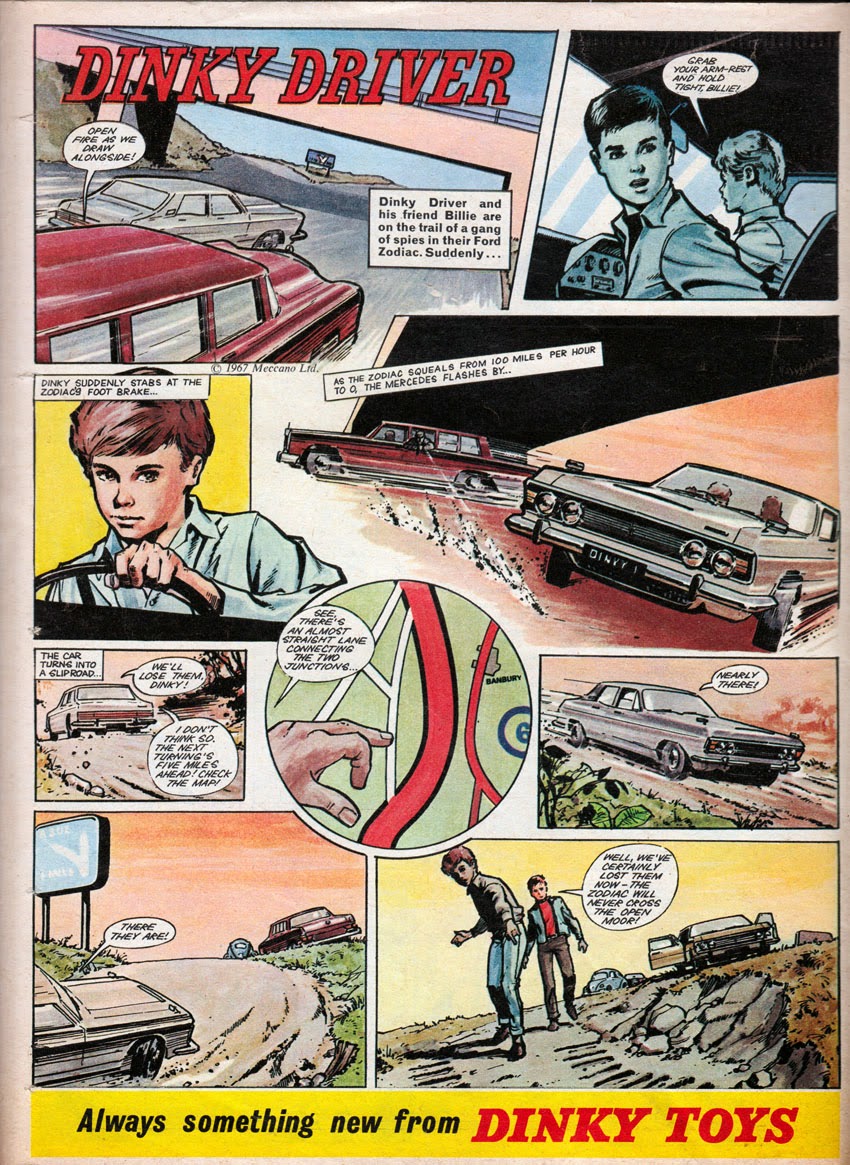 All in all, a strange mixture of stories with no one strip being a huge draw. (I remember giving up after issue 1, completely disinterested and put off by Mary Poppins which I considered too babyish by the time I was old enough for The Man from UNCLE and Sgt.Bilko.) It was inevitable the comic would have to change.

That change came quickly with issue 19, heralding a redesigned logo and more of an inclination towards its older age group. The masthead also now carried the words 'Anti-Mysteron Edition', and warnings about the Mysteron threat. As the Captain Scarlet TV series hadn't even begun yet, this may have led to a few confused readers.

Unsurprisingly, the revamp didn't help sales and Solo published its last issue dated September 16th 1967, still a week or two before Captain Scarlet began on ITV. Its chilling cover headlining the 'Victims of the Mysterons', - presumably photos of staff members at City Magazines. 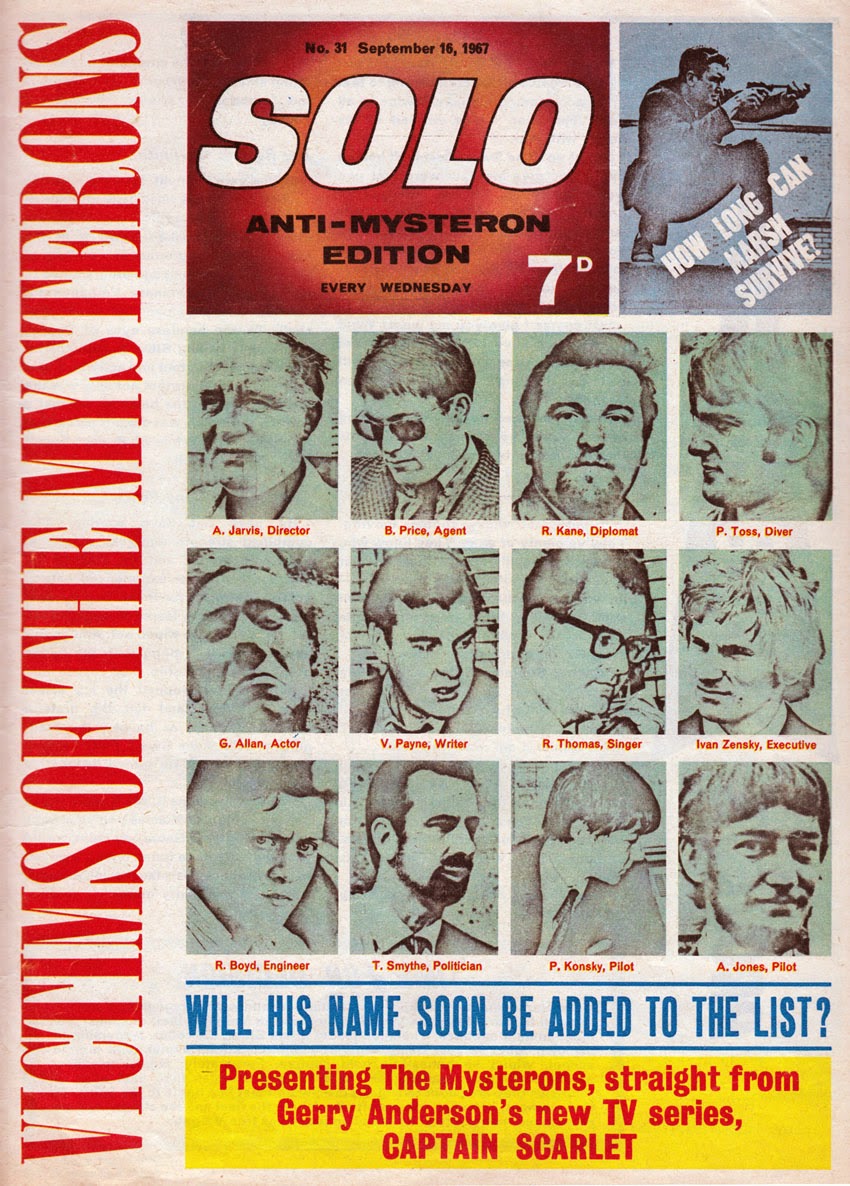 Inside, Spectrum News tied in with the cover story, and was equally bleak, whipping up its young readers' paranoia against an imaginary menace. 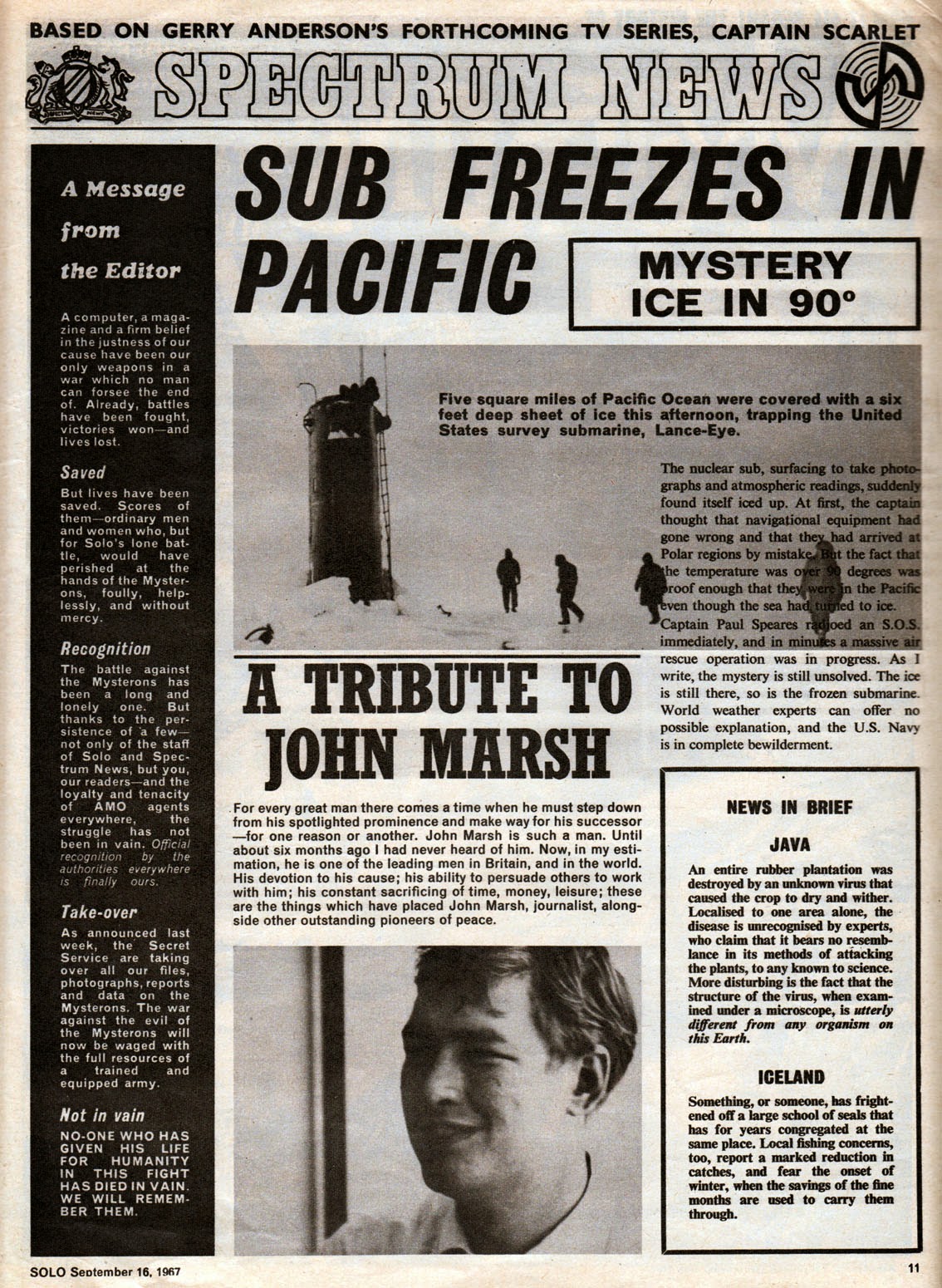 Preparations were under way for Solo to merge into TV Tornado, although the announcement was fairly underwhelming... 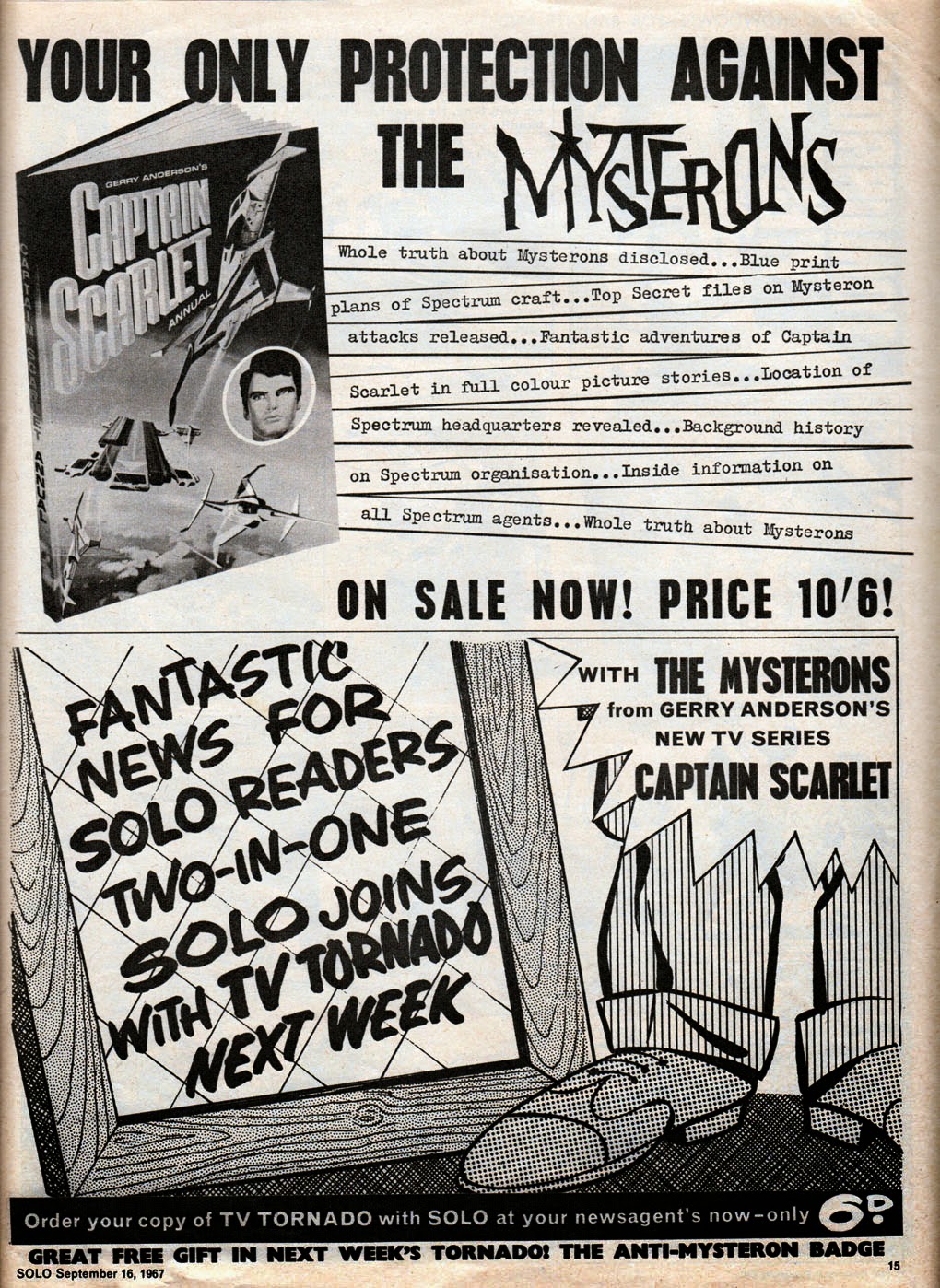 That issue also carried the first episode of The Mysterons, - a three page strip telling the story from the point of view of Spectrum's antagonists! As in the TV series, it's Earth who inadvertently begin the war. Art by Don Harley. 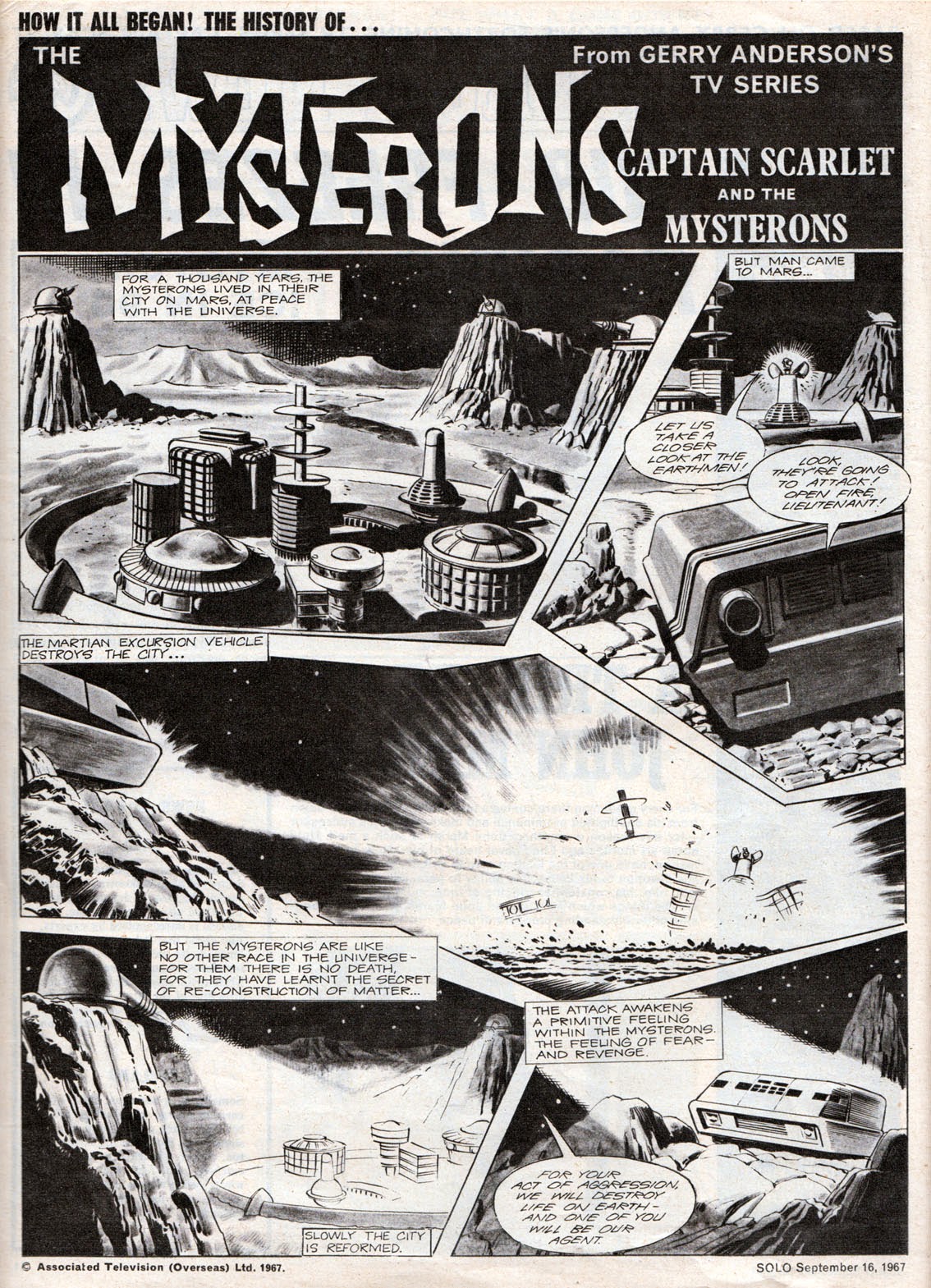 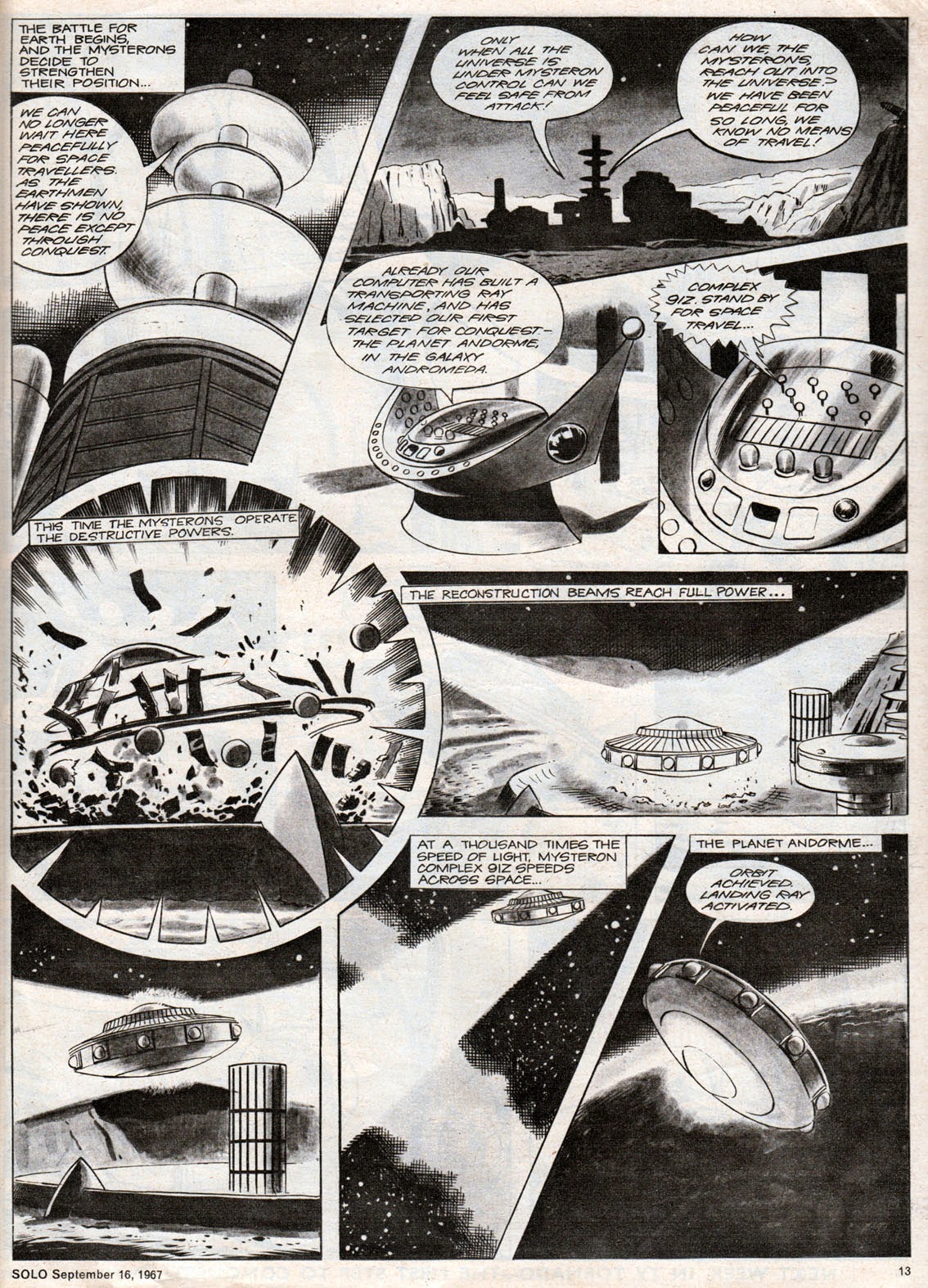 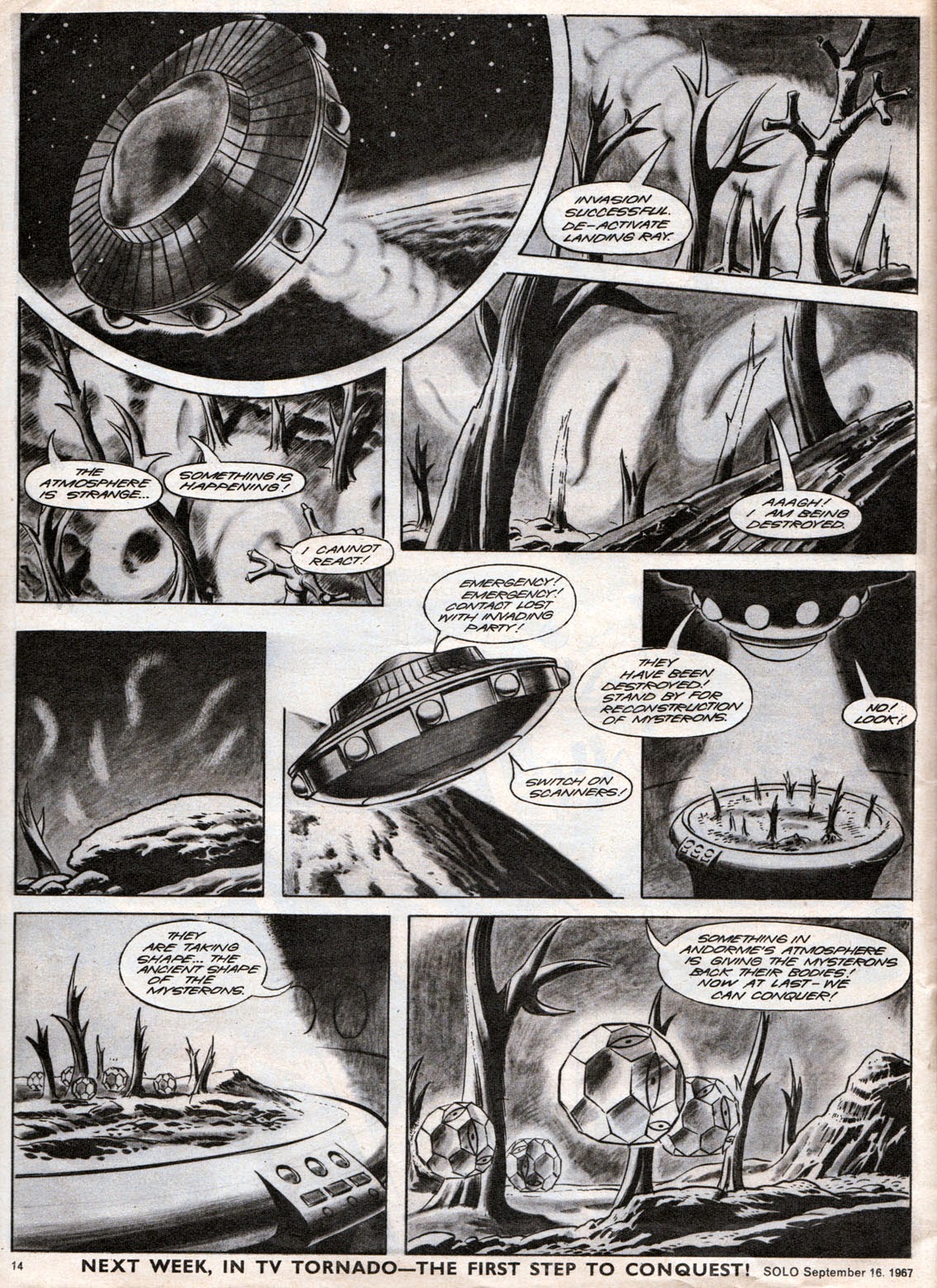 A new non-licensed adventure strip had begun with the revamp, - Tomorrow West, about a time traveller stuck in the old West. 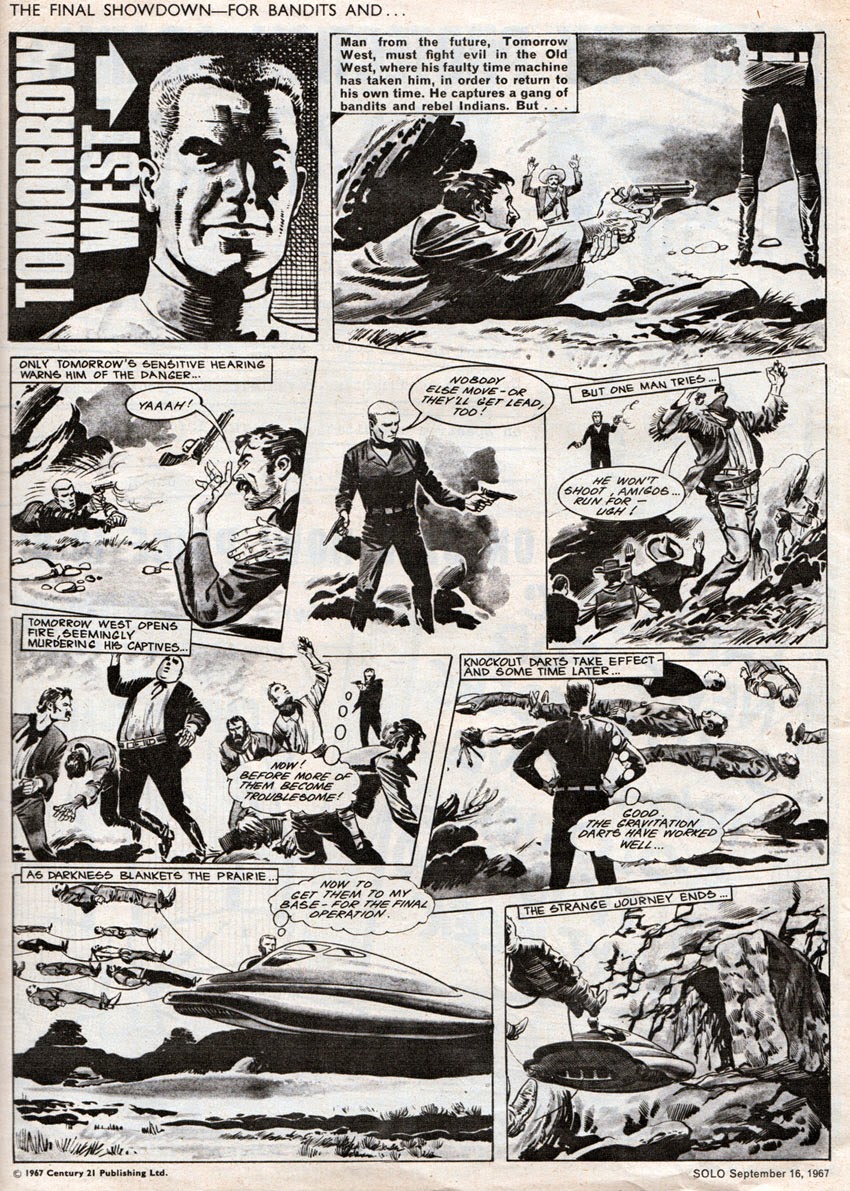 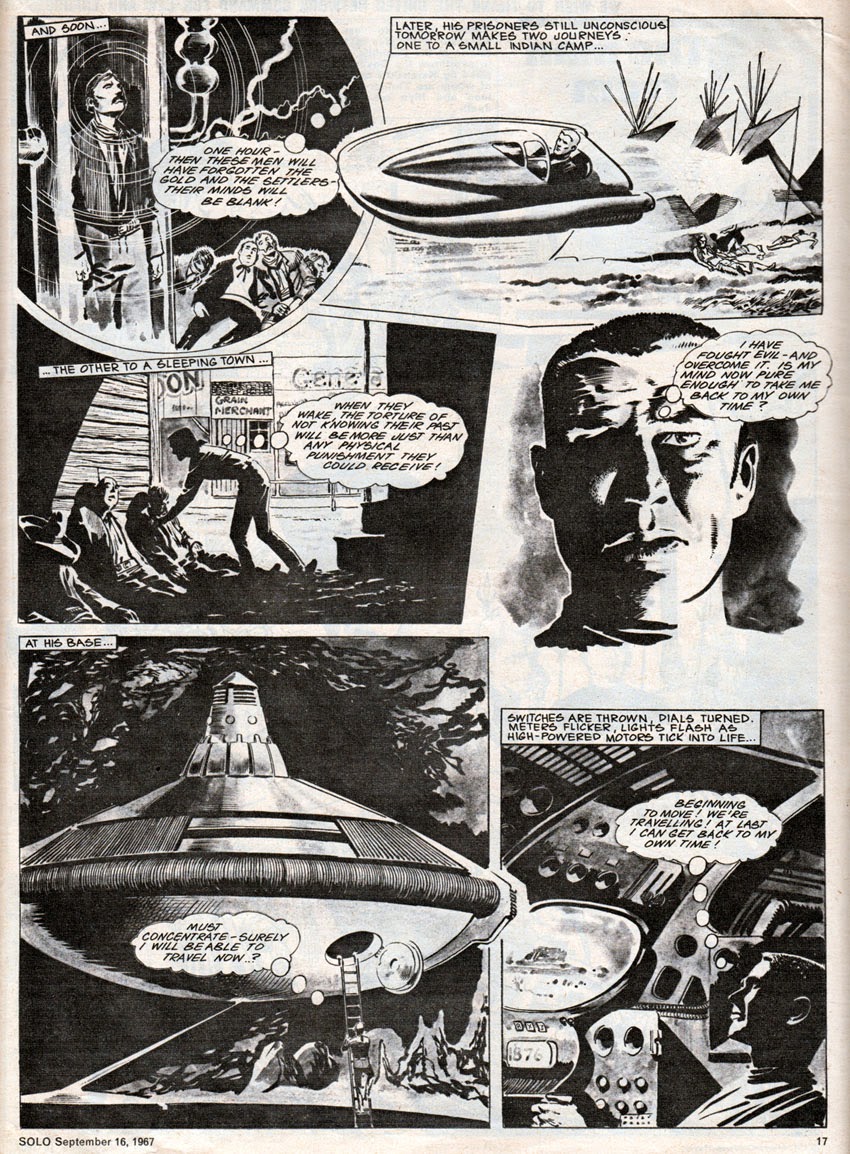 Solo was a slick production; 24 glossy pages, excellent Photogravure reproduction, but I think its initial uncomfortable mix of stories and its later Mysteron-themed items (before the TV series had even aired) did it no favours.

You can read more about Solo and other Century 21 titles at the excellent Technodelic website:
http://www.technodelic.pwp.blueyonder.co.uk/Upload02/MarkoftheMysterons.htm

Solo did have a lot of competition at the time (Odhams also expanded their line at the same time as City) so that'd be another thing going against it. Although I think its main problem was it didn't have strong enough strips (in the way that Valiant had Steel Claw, Kelly's Eye etc).

Yes, unusual to see Reg Parlett freelancing for City, as he's so closely associated with AP/Fleetway/IPC.

What happens next in the Mysteron strip Lew - I'm hooked!

It's classified information by Spectrum, Ian. I'll plunge into the time vortex to see if I can find out.

Did Fatman & Sparrow move over to TVTornado, as I vaguely remember them , but I never bought a single Solo?

They're not in the first merged issue (which is the only combined one I have) so I don't know if they were brought in at a later date or not.

I enjoyed this post although I have very vague memories of Solo. I was 6 at the time. I remember being ill in bed and having 3 or 4 copies to keep me company. Loved The Scarecrow strip..

Comics that give you escapism when you're poorly are always fondly remembered. That's one of the great things about comics and how beneficial they can be.

Yes, The Scarecrow looks to be the best thing in those early issues.

Hello Lew, I'm trying to determine the publication range of "The Adventures of Seaspray", drawn by French artist Jean Sidobre. It started in Solo #1 and lasted at least until #29, as far as I know. Could you tell me if it ran until the last issue, and if the story was concluded or left hanging? Thanks in advance, Tristan

I don't think I have that last issue any more, Tristan. I don't recall seeing Seaspray in that one but I could be mistaken.

Can anyone out there help?

I have fond memories of Solo and the fab free gifts. I've tried the usual places - where can I buy copies/Anthology?

Try eBay for back issues.

As for anthologies; there aren't any of Solo strips, sorry.