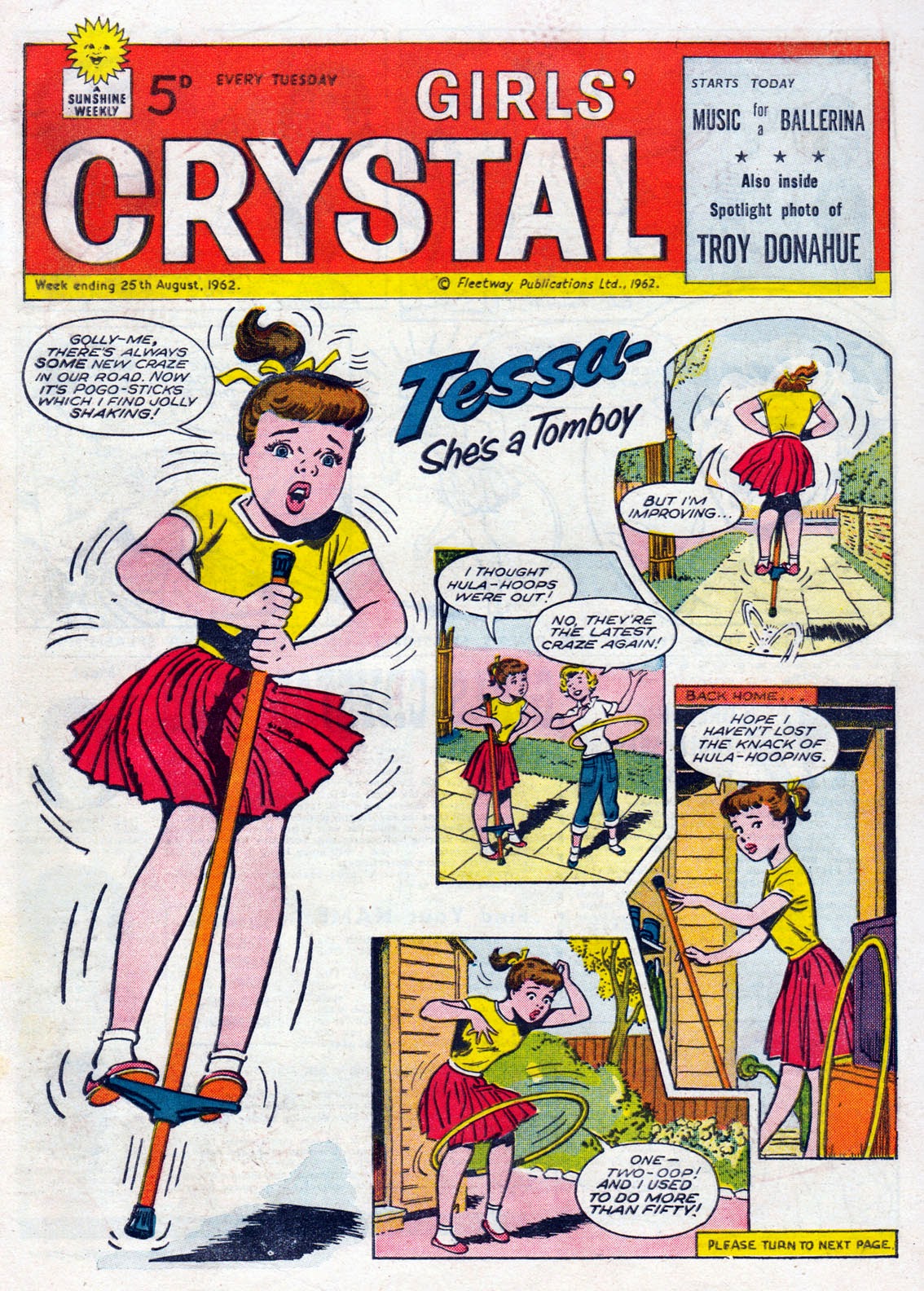 I've rarely featured girls' comics on this blog, mainly because I naturally didn't read them as a boy so I knew very little about them. However, over the years I've learnt that most of them did contain some great artwork and they're certainly on a par with any boys' comic. Different in story tone, with an emphasis more on character and emotional tension rather than action and violence, but equally as entertaining for their intended audience.

Let's start rectifying things a bit with a look at an issue of Girls' Crystal that was published 52 years ago this week. Running for ten years from 1953 to 1963, Girls' Crystal was published by The Amalgamated Press, which by this time had become Fleetway Publications. 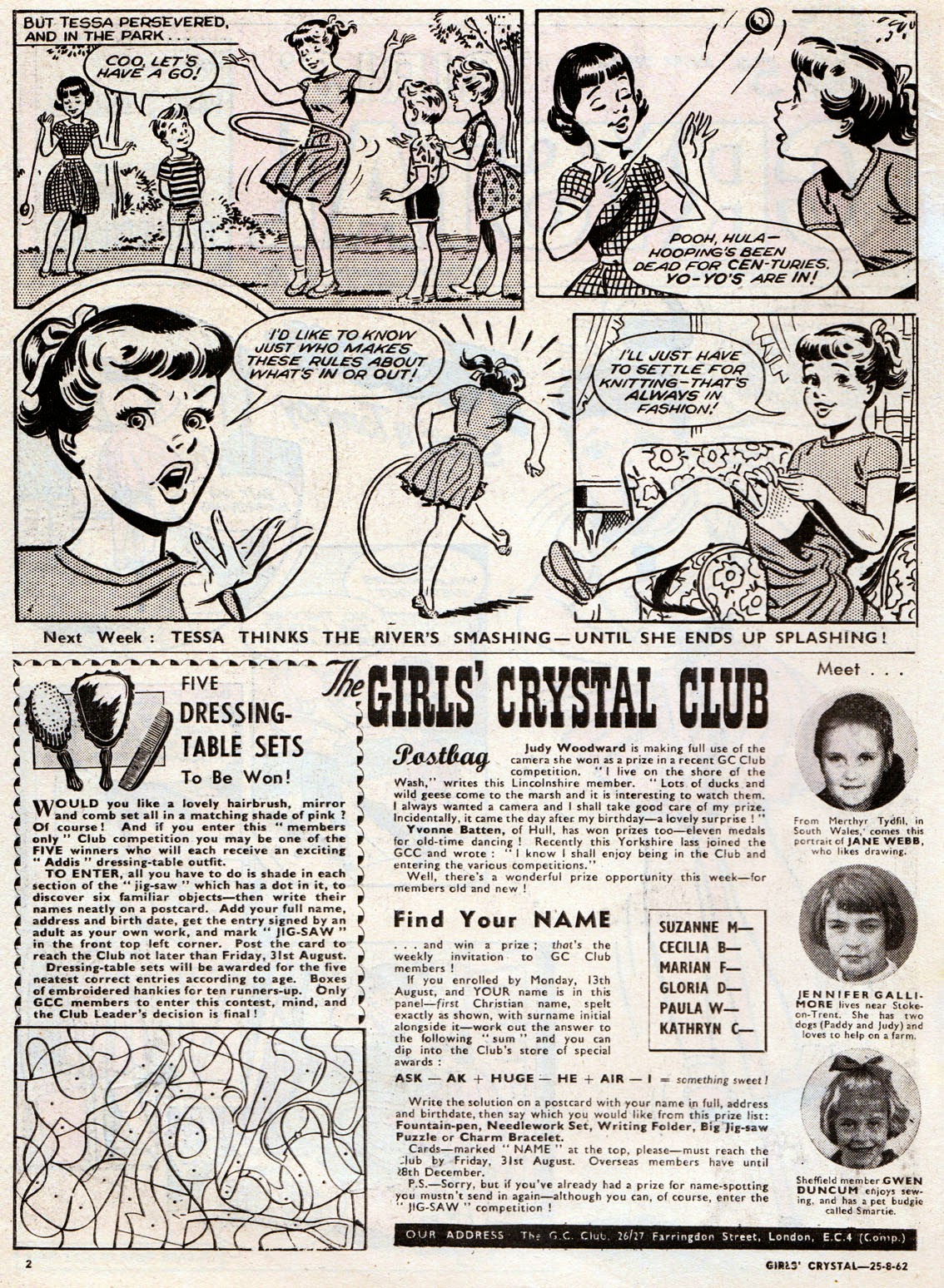 Comic historian Steve Holland tells me that the cover strip of this issue Tessa - She's a Tomboy, was drawn by Cecil Orr. A very nice lighthearted style, ideal for it. Incidentally, pogo-sticks and hula-hoops were indeed very popular in the early sixties. I remember the older local kids playing with them in the street.

The 20 page comic carried a mixture of comic strips and prose stories, plus a page spotlighting the latest schoolgirl crush (in this case, Troy Donahue). This issue also carried an ad for the latest Princess pocket libraries... 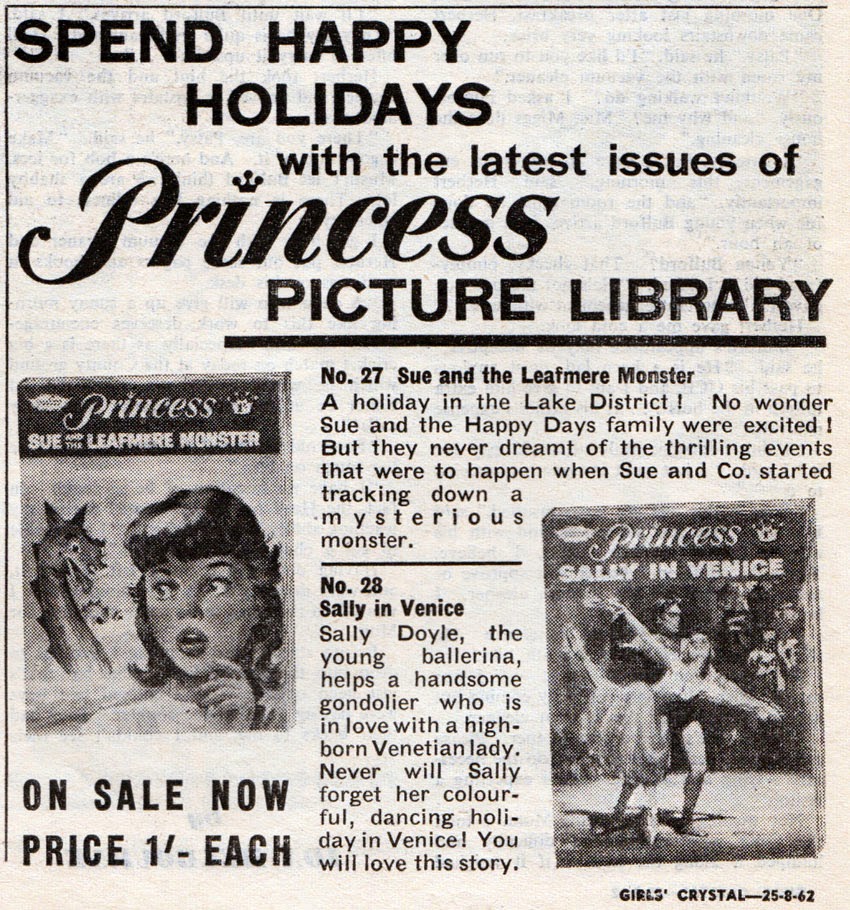 Inevitably, there was a strip about nursing, a noble profession for anyone but very much encouraged for girls at the time. I Want to be a Nurse has some good line work but I'm not sure who illustrated it. (Update thanks to David Roach: The art was by someone named Ann Simmons or G. Simmons.) 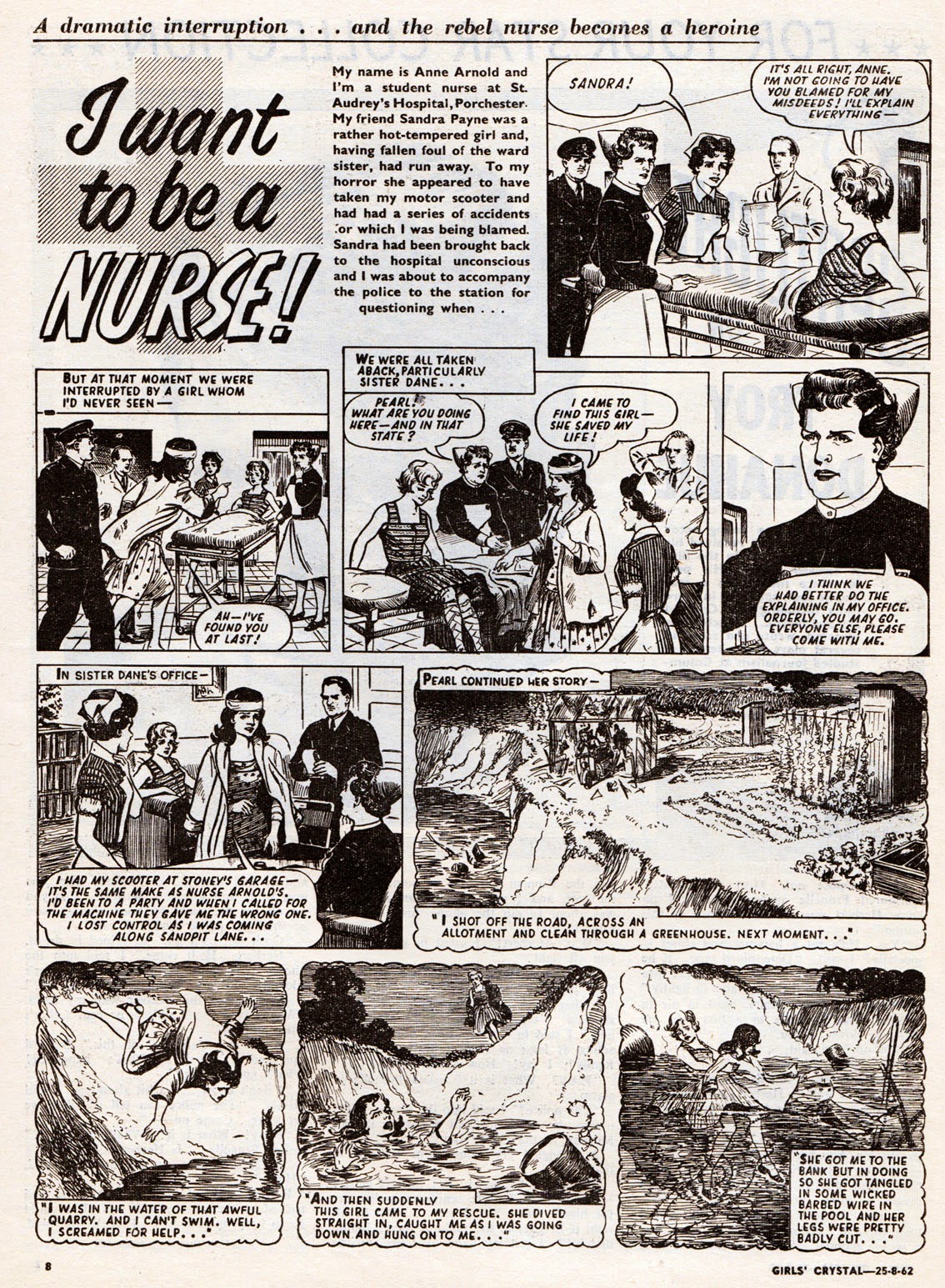 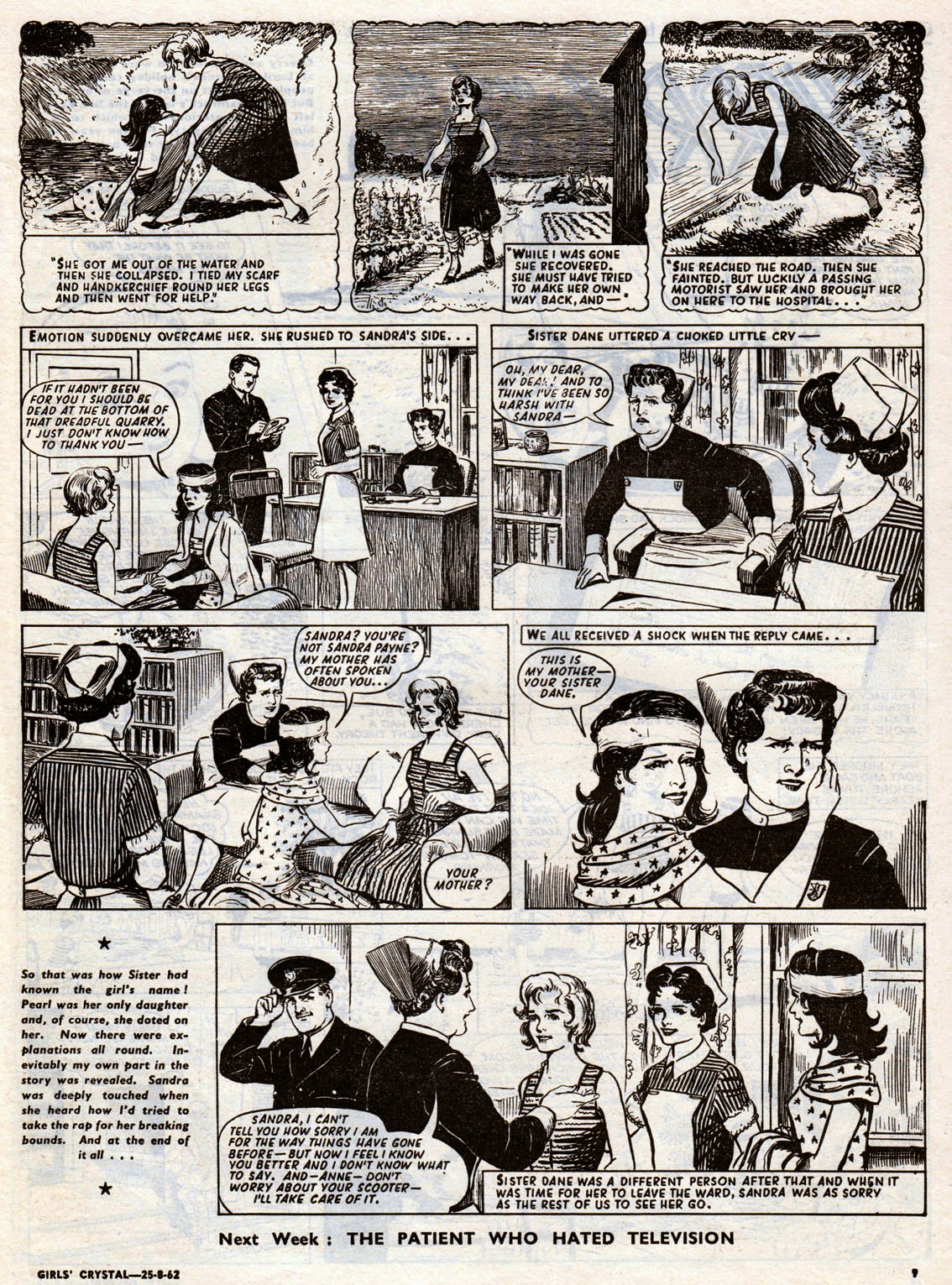 Cherry and the Children was illustrated by John Armstrong, years before he drew the popular Bella strip in Tammy of course. 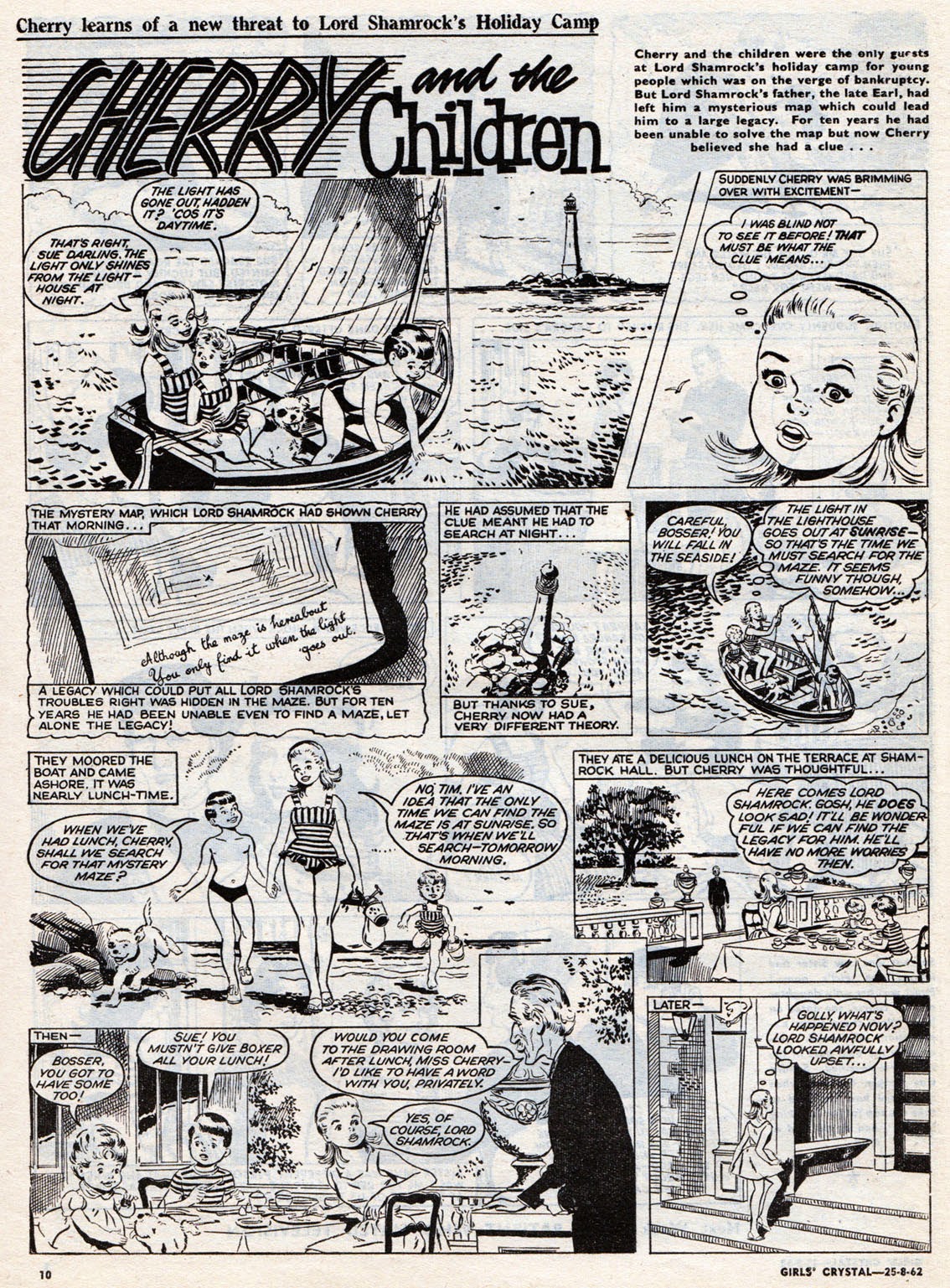 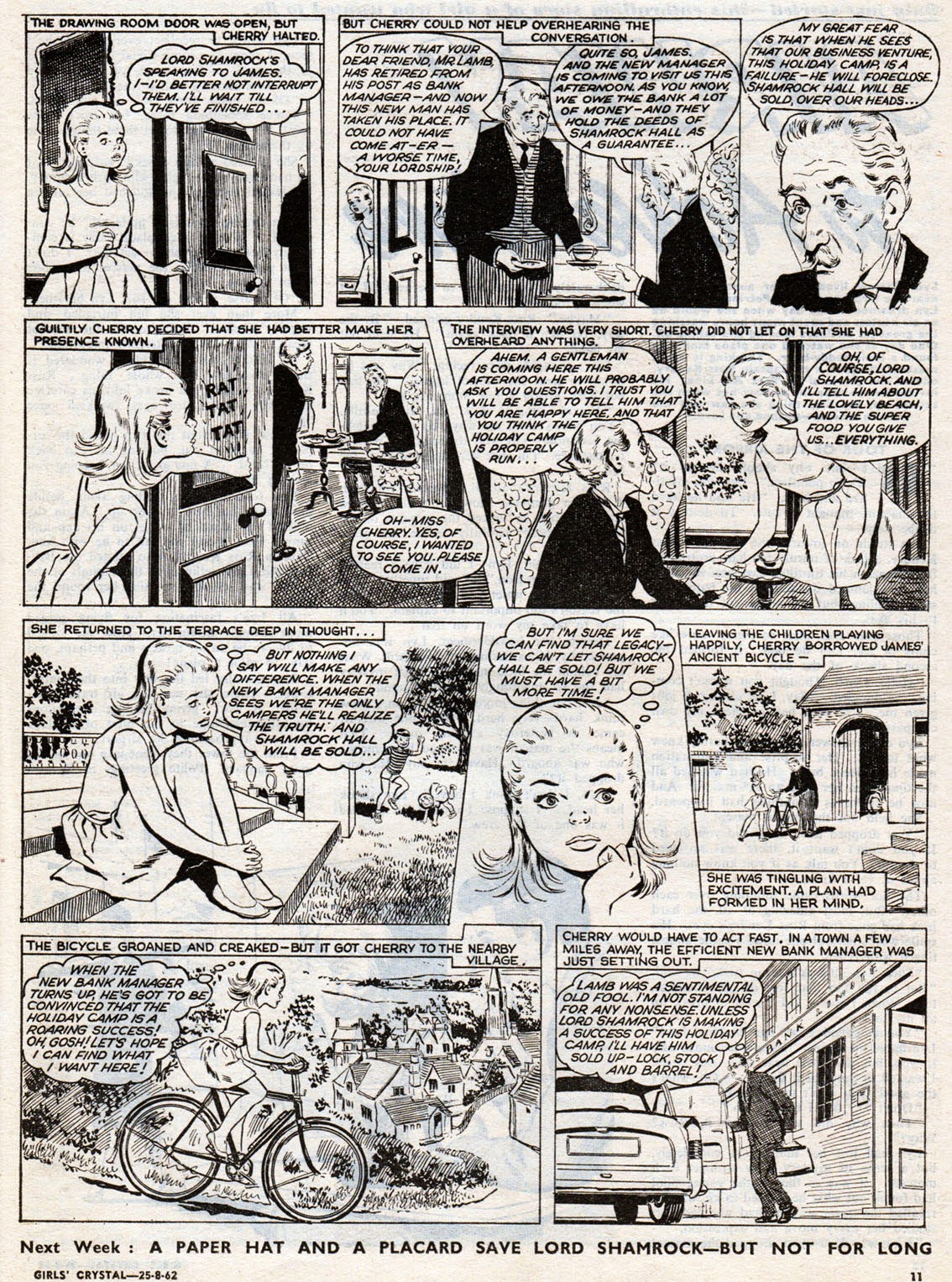 Only one humour strip in the comic; Little Angel. Again, I don't know who the artist was but it's a good, crisp style.

Ghost Village has a great spooky and atmospheric feel to it. Illustrated by Tom Kerr who, as most of you will know, drew many strips for various Fleetway boys' comics. 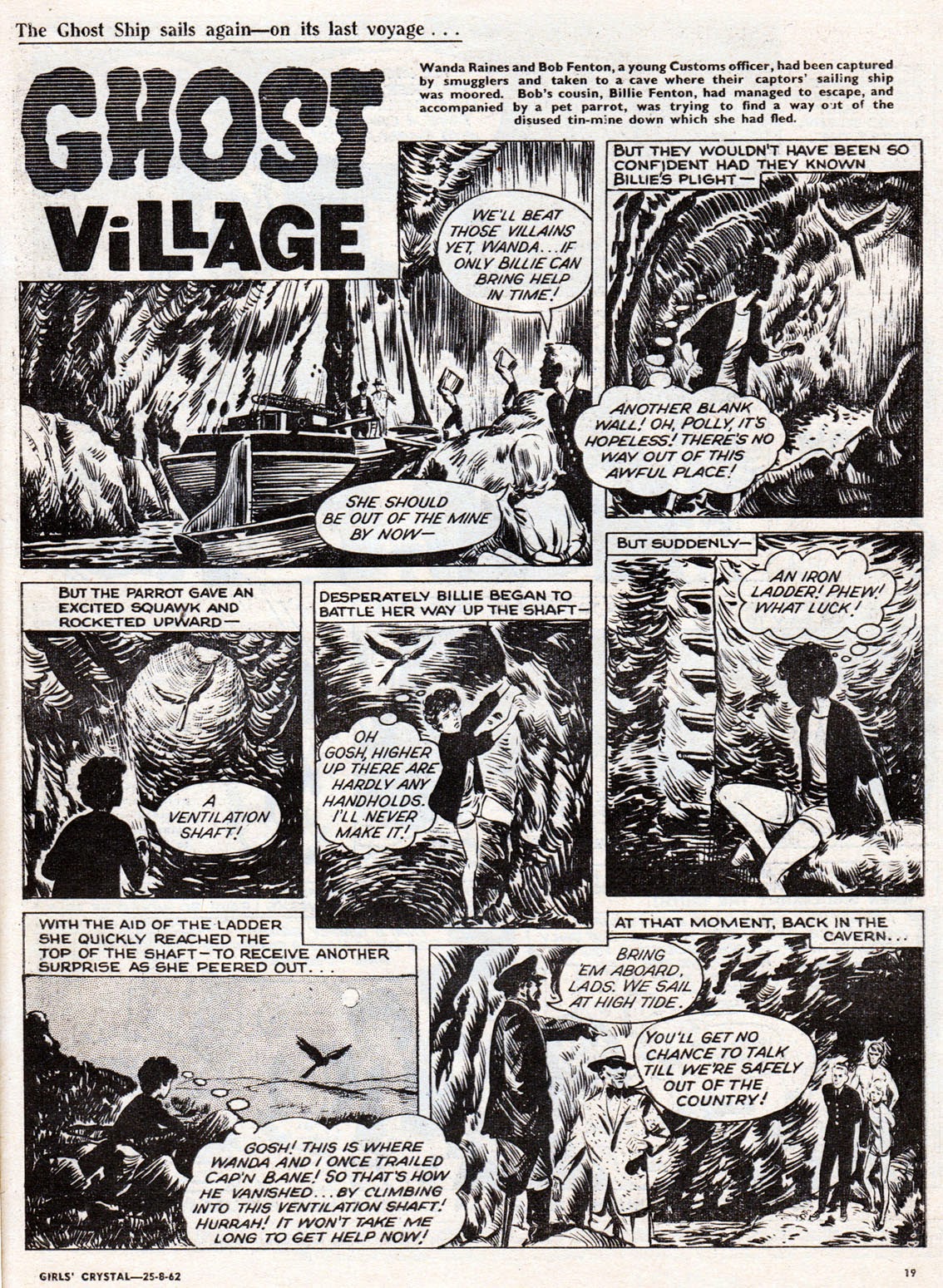 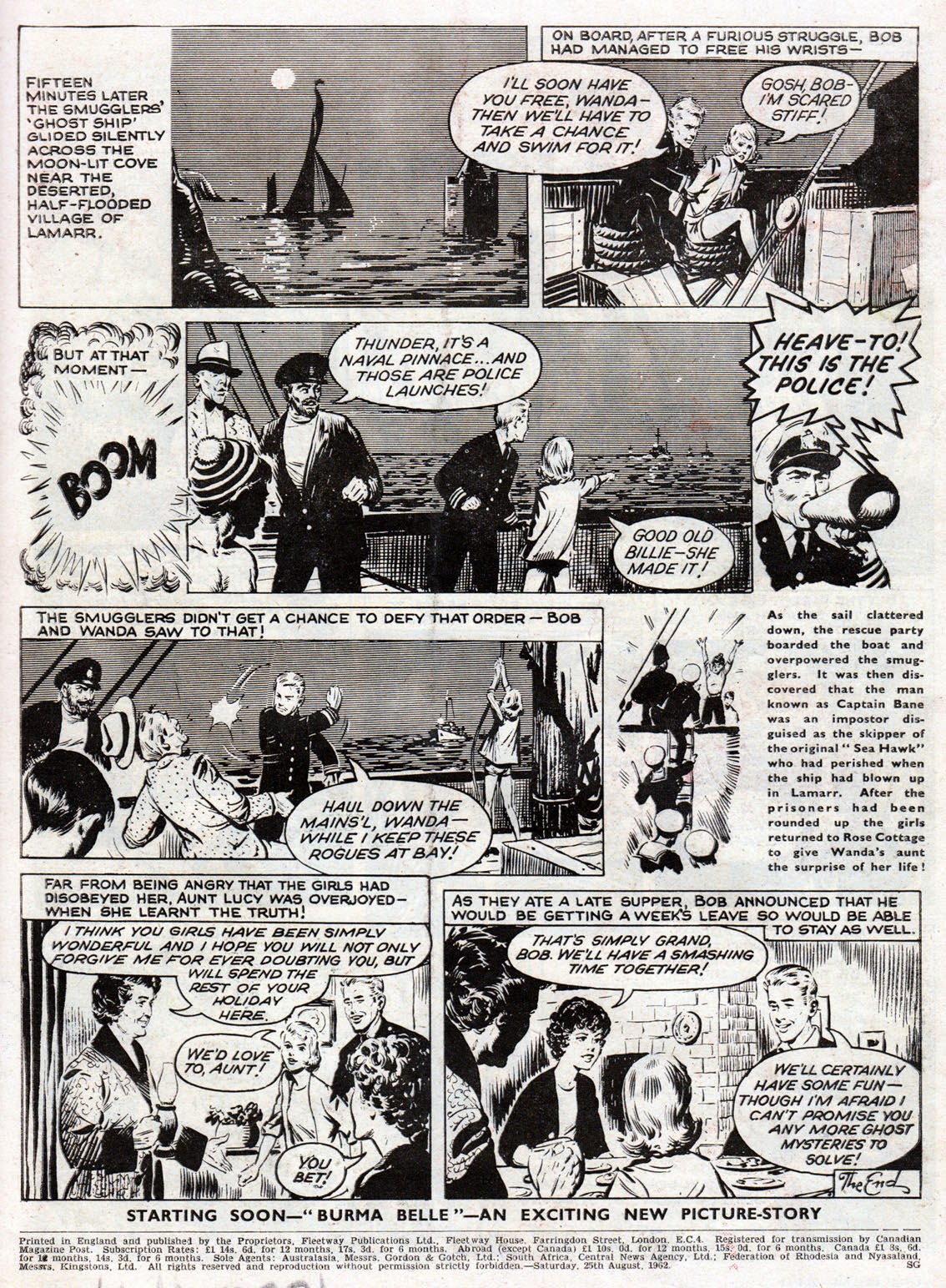 As with boys' British comics of the time, girls' titles of 50 years ago were aimed at a slightly older reader than they are today. Tastes and society have changed and it's unlikely girls of 8 to 13 years old would be interested in anything like Girls' Crystal now. Having said that, Manga was very popular with that age group a few years ago so there's always hope. Perhaps a modern version might work, but the expense of launching such a new title is a risk that most publishers would not dare venture into. It seems it's far safer now to launch a comic on the back of a brand (such as the new Lego Friends girls' comic) and aim it at the very young.
Posted by Lew Stringer at 17:00

My sister got Mandy and Judy and I used to read them after I'd read my own Marvel comics. They were actually quite good with some addictive stories that got me curious as to what would happen next. I remember Judy reaching No. 1000 and there was no mention of it at all in the comic which baffled me as I was used to Marvel UK making a big fuss at No. 100, 200 etc (not that many Marvel UK comics reached those lofty heights) but Judy had made it to a thousand issues and didn't say a word about it. I don't think there are any girls' comics at all these days as far as I know.

No comics for girls aged 10-11 is what I meant which was my sister's age when she was reading Mandy and Judy - those comics would probably be far too innocent now.

Couldn't you sneak a look at your sisters or cousins comics Lew? That's how I read issues of Spellbound! All long since trashed - - unfortunately.

Gareth, I have no siblings and rarely saw my cousins so no, I didn't get to read any girls' comics. I saw some at school in the 'Wet Day Comics' box but for a boy to choose a girls' comic to read in class wouldn't be wise. :) Anyway, they just didn't appeal back then, in the same way that Lion or Victor didn't appeal to most girls.

Colin, you're right. There are no UK comics around for girls that age now. Any with strip content (such as Lego Friends) are pitched at the very young and the stories are very simplistic indeed. Most publications for girls are sadly, like those pitched at boys, mostly full of 'activity' pages and lightweight features. And usually based around a brand of toys or a TV show. A sad scenario.

PS: Good point about the reluctance to celebrate significant numbers in UK comics, Colin. I don't know why some editors were so reserved about it. Perhaps they thought drawing attention to the age of a comic might put off newer readers? (Which, I think, is why IPC didn't have issue numbers on most of their titles such as Valiant, Lion, Tiger, etc.)

As I have 3 brothers and 3 sisters, I had access to a fair number of comics during my childhood and was happy to read anything ! But you know how it was back in the 1960s.I had to sneakily read the copies of Bunty and Mandy that came into our house as one of my two elder sisters just thought it was plain wrong that a boy should read a comic for girls and would sometimes "confiscate" them from me. However, in the 70s, my little sister was more than happy to let me read her comics and I even used to buy Misty for her as I liked it so much !

Thinking about it I did have the first issue of Lady Penelope in 1966, but upon realizing it was a girls' comic I never had it again. I suppose I was a product of my time in that it just wasn't done for boys to read comics aimed at girls, or vice-versa. The general attitude on our council estate was that you'd have to be be a right softy (or harsher words to that effect) if you looked at a girls' comic. It was so ingrained that it never even occurred to me to read girls' comics. It's like they became invisible on the shelves and you wouldn't give them a glance.

Now of course, as a collector and comics creator, I realize I missed out on some great artwork and well crafted stories. I've since bought a few comics on eBay though and I'll show some strips from those in the months to come.

Perhaps if Misty had come along later I'd have picked it up, but at the time (1977) I was 18 so wasn't buying any children's comics. The only UK comics I was buying then were 2000AD and the British Marvels. (Admittedly they were also aimed at children but they felt 'older' than other comics.)

Lew, your point about not reading girls' comics reminds me that when I was about ten I loved reading mystery novels aimed at young readers and that included Nancy Drew - a couple of years ago I discovered to my amazement that Nancy Drew was for girls ! Had I known that at the time I would almost certainly never have read them and would have missed some great stories. All that boys comics/girls comics was such nonsense - the great thing about Marvel was that their comics were sexless (even though it was mainly boys who read them). But of course it was the same in school when us boys did woodwork while the girls did cookery - in all the years since I have never once needed to make a dove-tail joint but there have been plenty of times when some cooking skills would have been very handy.

Good point, Colin. The practical skills taught to boys were bloomin' useless. Who makes their own furniture? It was a throwback to the days when boys would leave school to become cabinet makers or something I suppose.

Lew, I too remember buying 1st issue of Lady Penelope and feeling very furtive about it. Liked it but was too self conscious to go back for Issue 2!

The ad for Lady P No.1 in TV21 clearly stated it was for girls but having never seen a girls' comic before I didn't know what to expect. Yeah, bit of a shock. The free pink ring didn't suit me either. :)

Just noticed that a copy of LP #1, with free pink signet ring sold in June's Compal auction for £490!! Phew!

Colin Jones! I've just noticed you've been deleting your comments again, making the thread nonsensical. Enough please, or I won't publish any more comments from you.