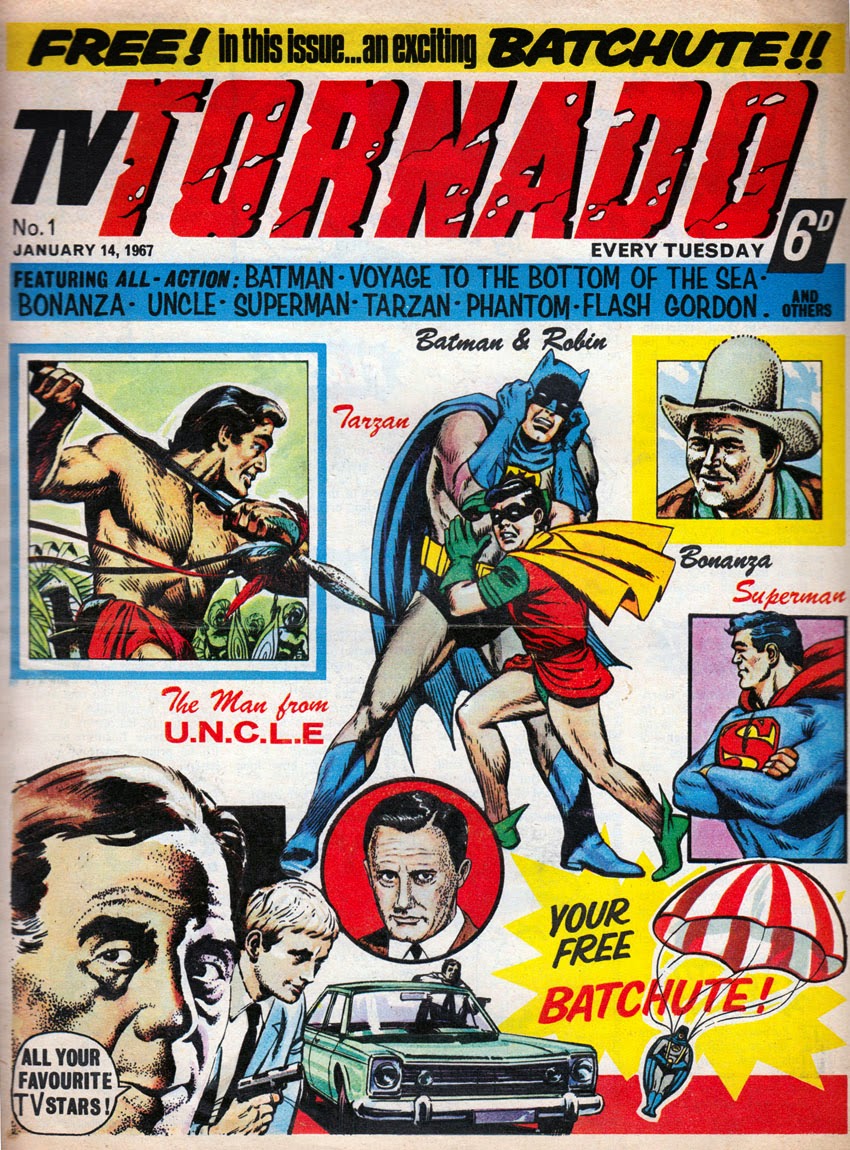 As with Solo (covered in the previous blog post) TV Tornado was a comic launched by City Magazines after the successes they'd had with TV Century 21 and Lady Penelope weeklies. Unfortunately it never reached the heights of popularity of those two comics, although it did manage to run for 88 weeks.

TV Tornado was a bit... odd. Take a look at the cover to issue 1 above for example. Various redrawn images of popular characters but the composition is quite bizarre, with Tarzan apparently threatening Batman and Robin much to the amusement of Hoss from Bonanza and the nonchalance of Superman. Even as a 7 year old I thought this was a strange cover, and I'm sure most readers would have preferred a more heroic illustration of Batman rather than the peculiarly cowering one that was used. 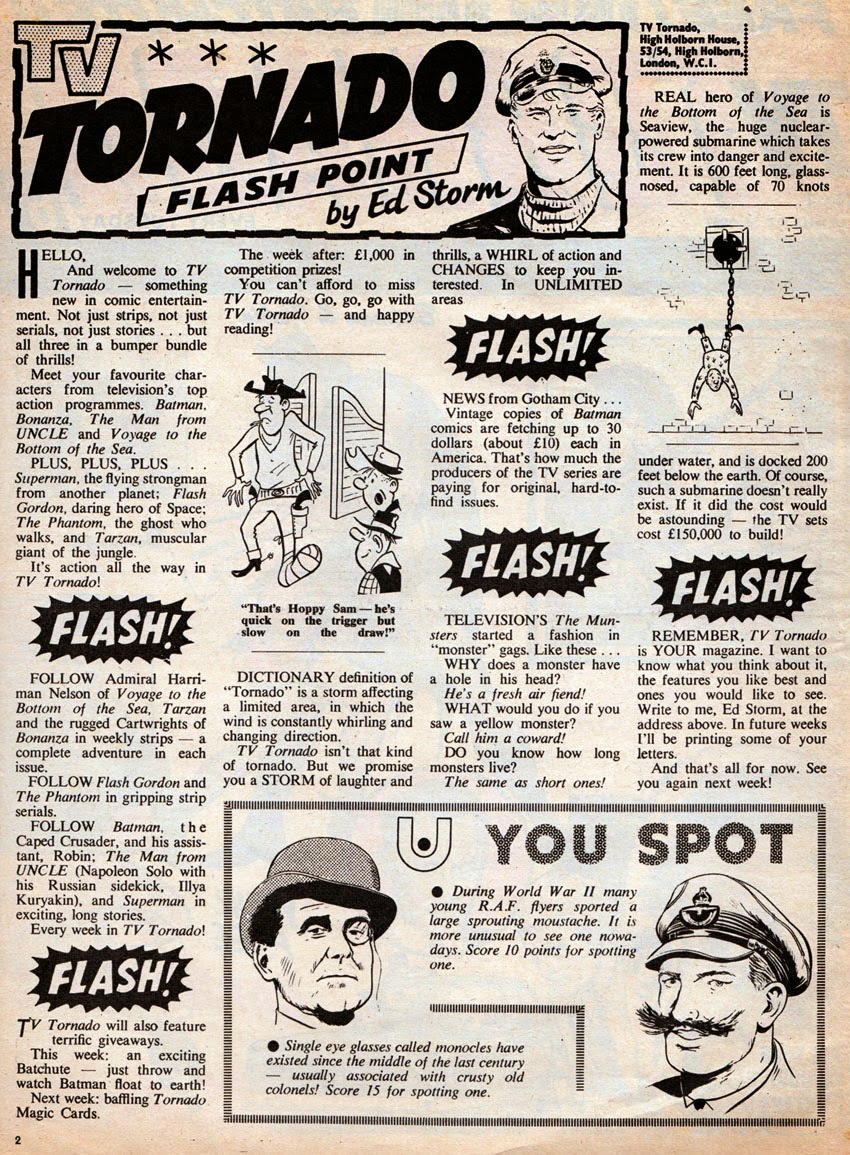 Inside, the editorial by 'Ed Storm' tells us that TV Tornado is a "bumper bundle of thrills" featuring comic strips and text stories. It neglects to mention that The Phantom isn't actually a TV show, but perhaps he came as part of the King Features deal to use Flash Gordon. (Flash wasn't a TV series either at that stage but kids were familiar with him due to the 1930s chapter serials still being screened at Saturday morning matinees at ABC cinemas.) 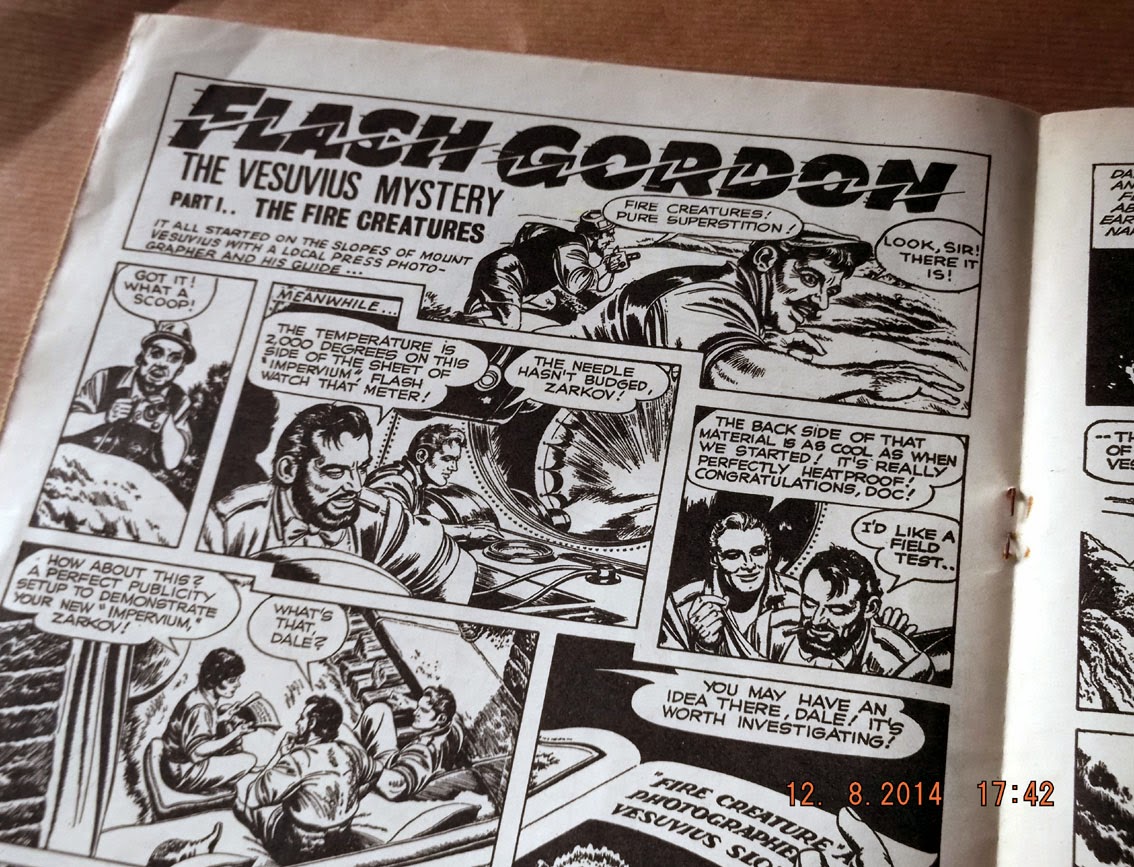 Everything about TV Tornado screamed low budget, from its one colour page (the front cover) to its use of prose stories and U.S. newspaper strips. It does have some interest for collectors though. Here's a three page Batman text story from issue 1... 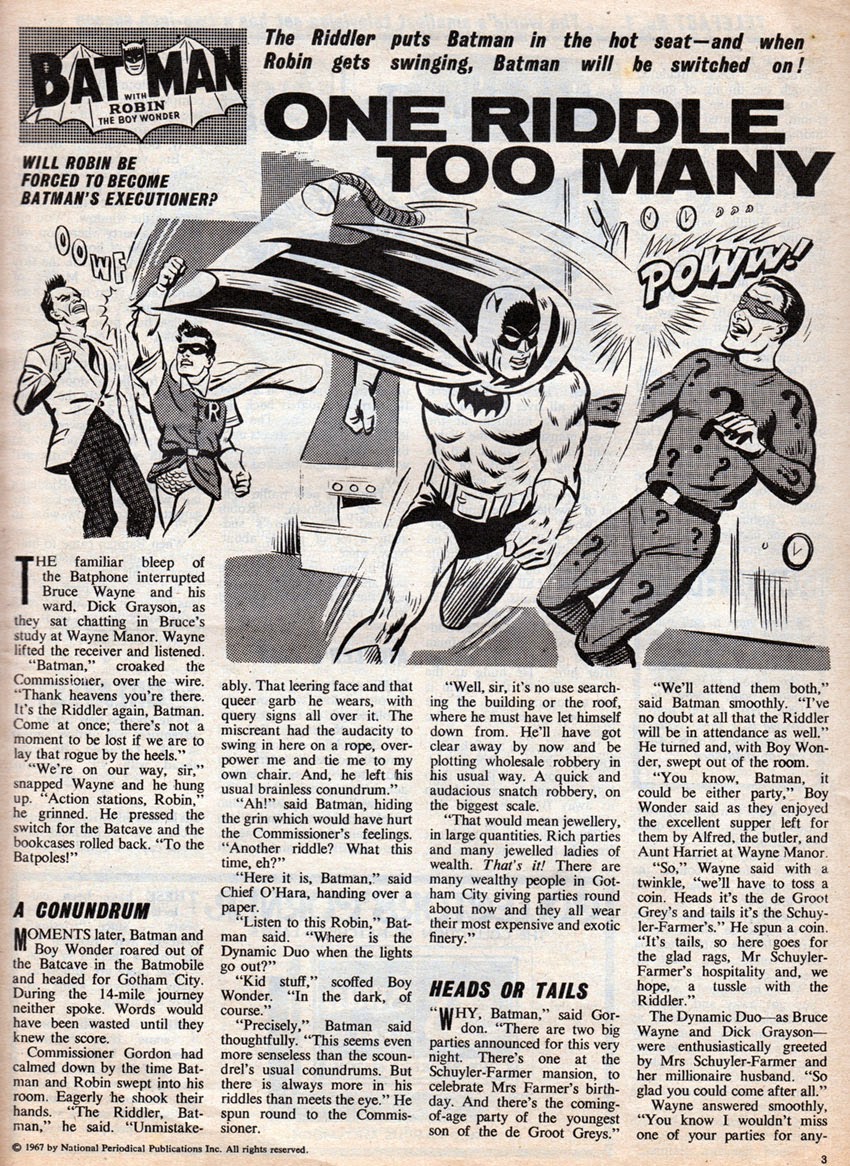 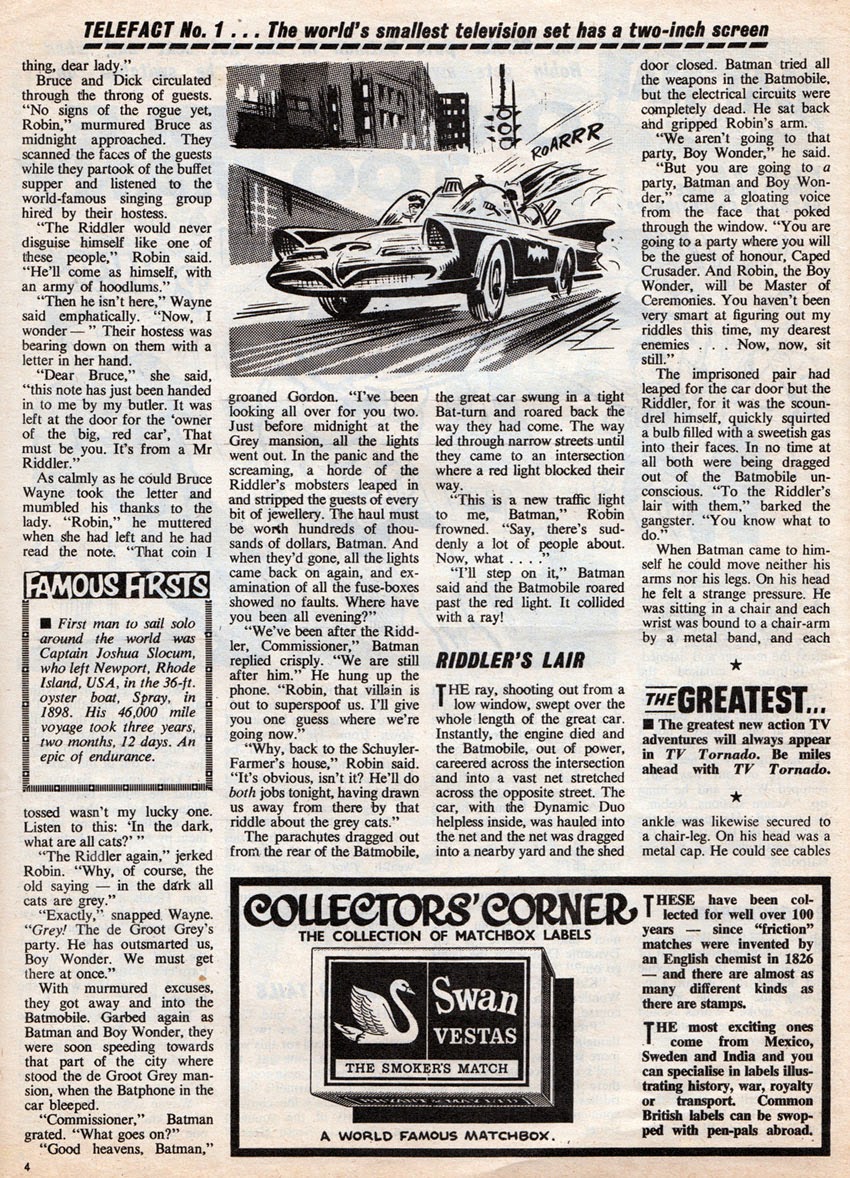 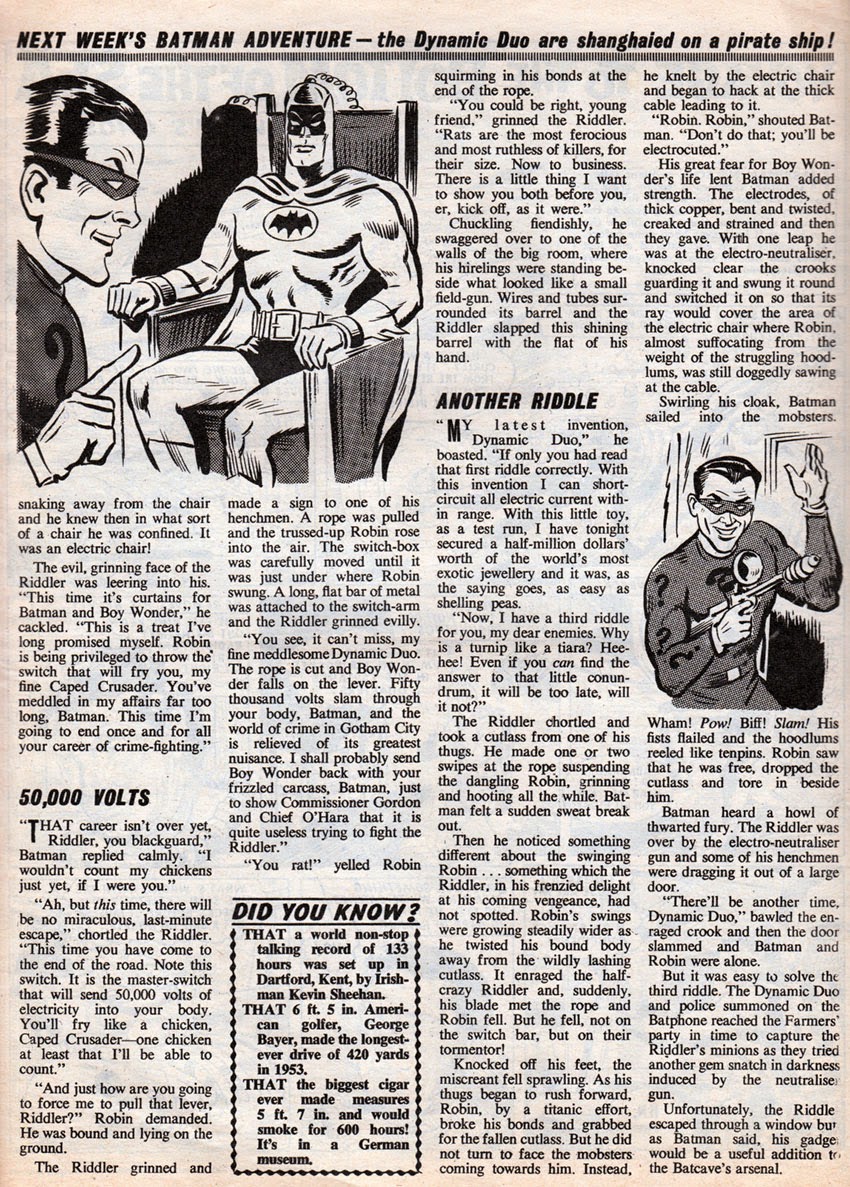 There were also text stories for The Man from UNCLE and Superman... 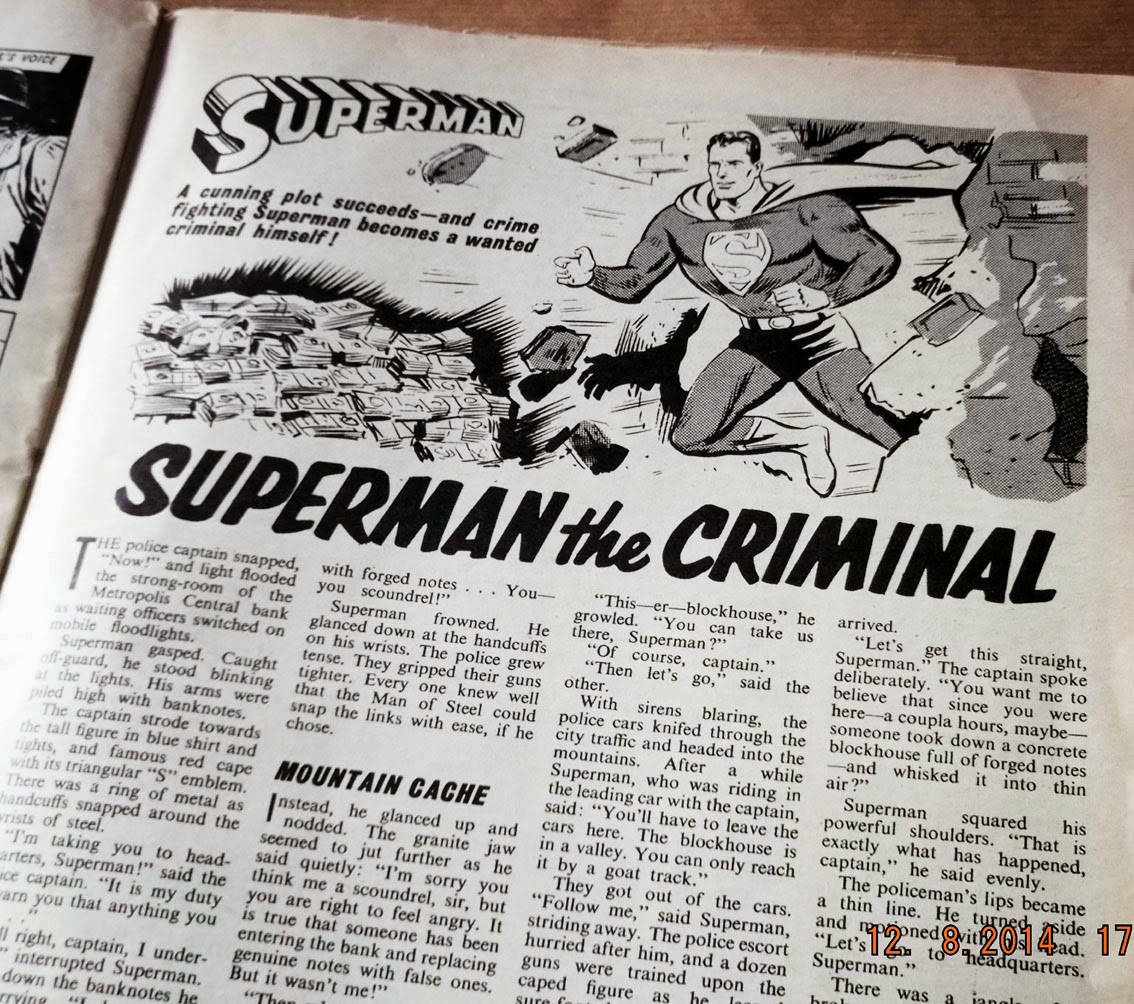 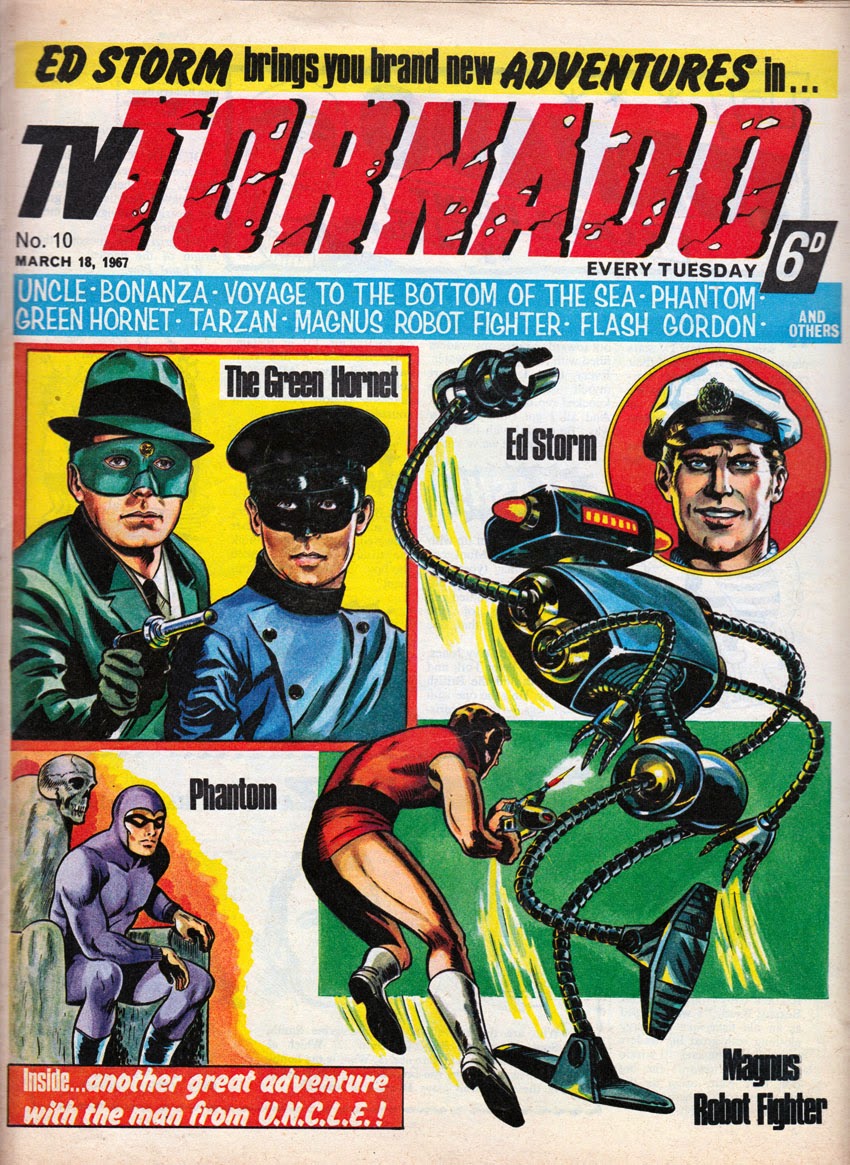 Curiously, Batman and Superman were only in the first few issues. The next issue I have is issue 10, by which time they'd been replaced by The Green Hornet and Magnus, Robot Fighter. The latter was a popular American comic published by Gold Key but the strip in TV Tornado appears to be new. 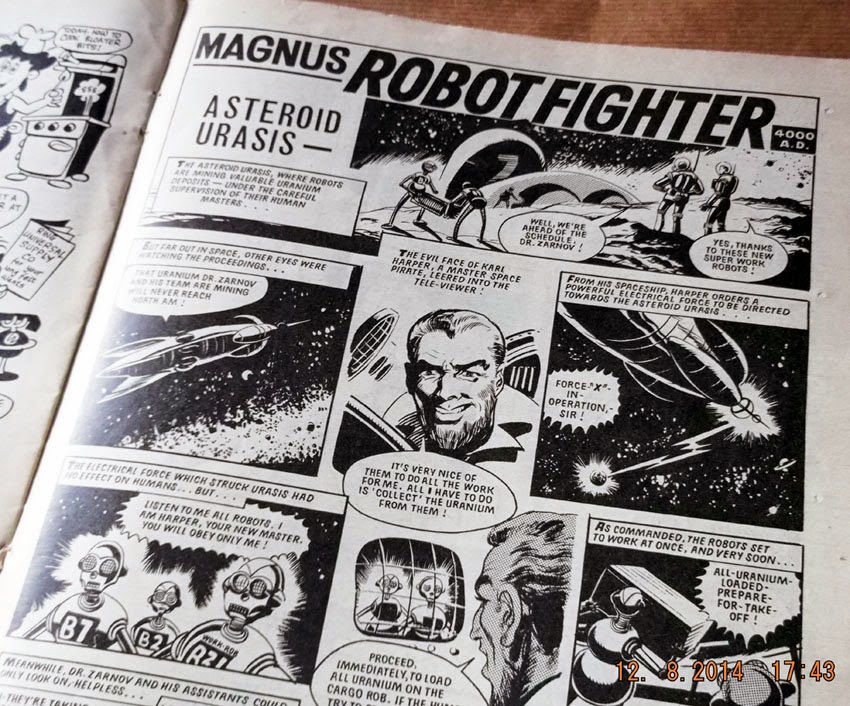 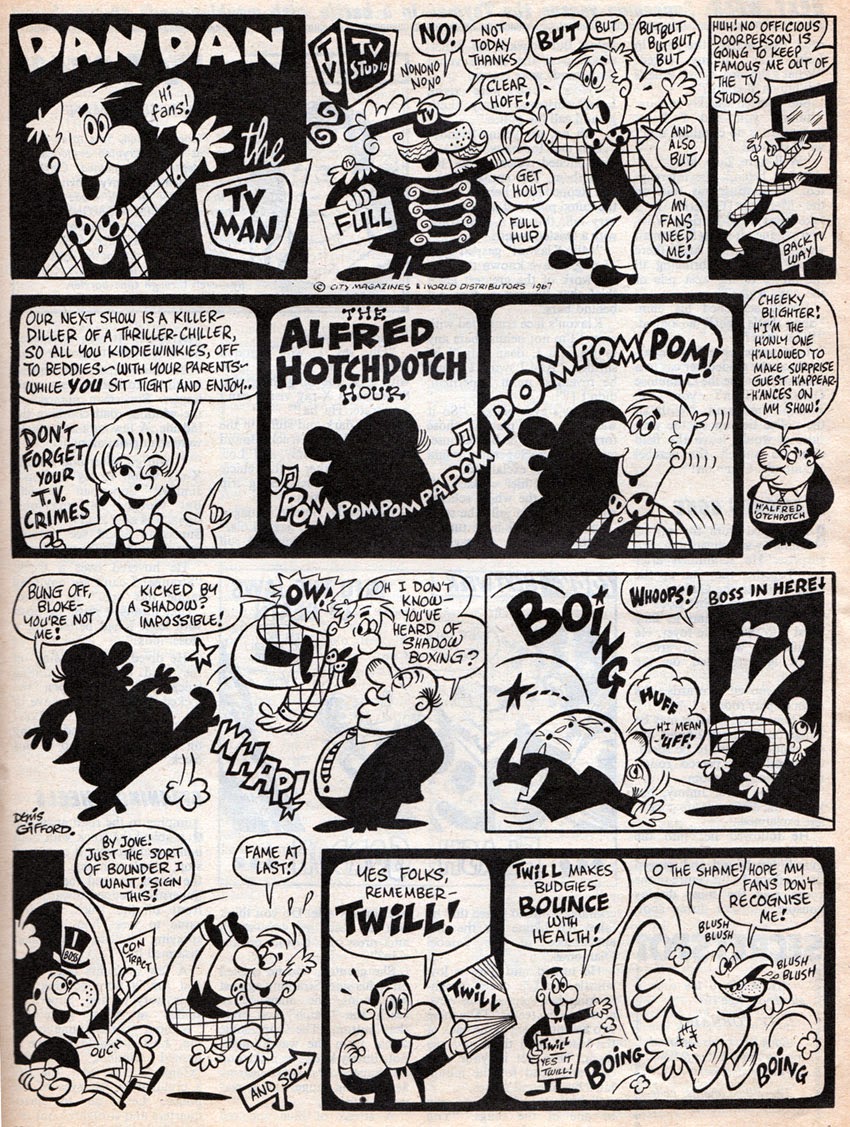 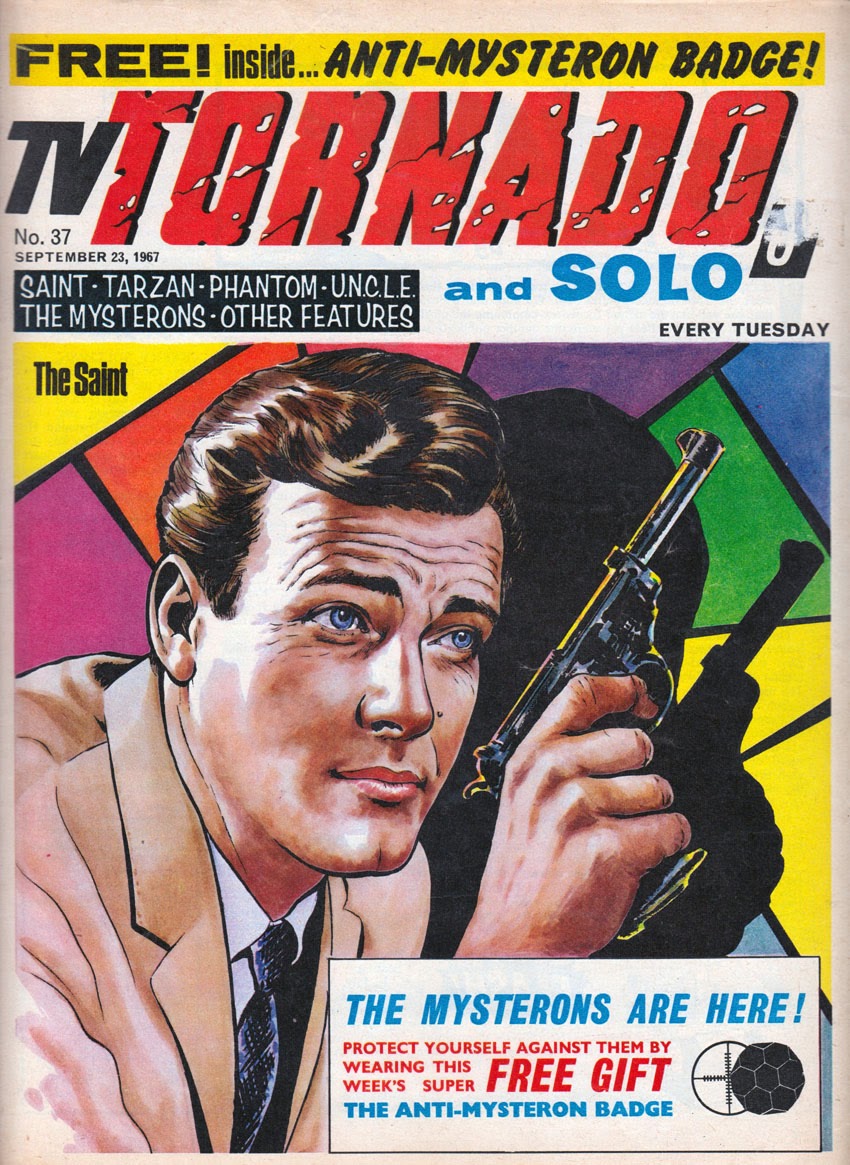 By this time, The Saint was starring in the comic, based on the hugely popular Roger Moore TV show. 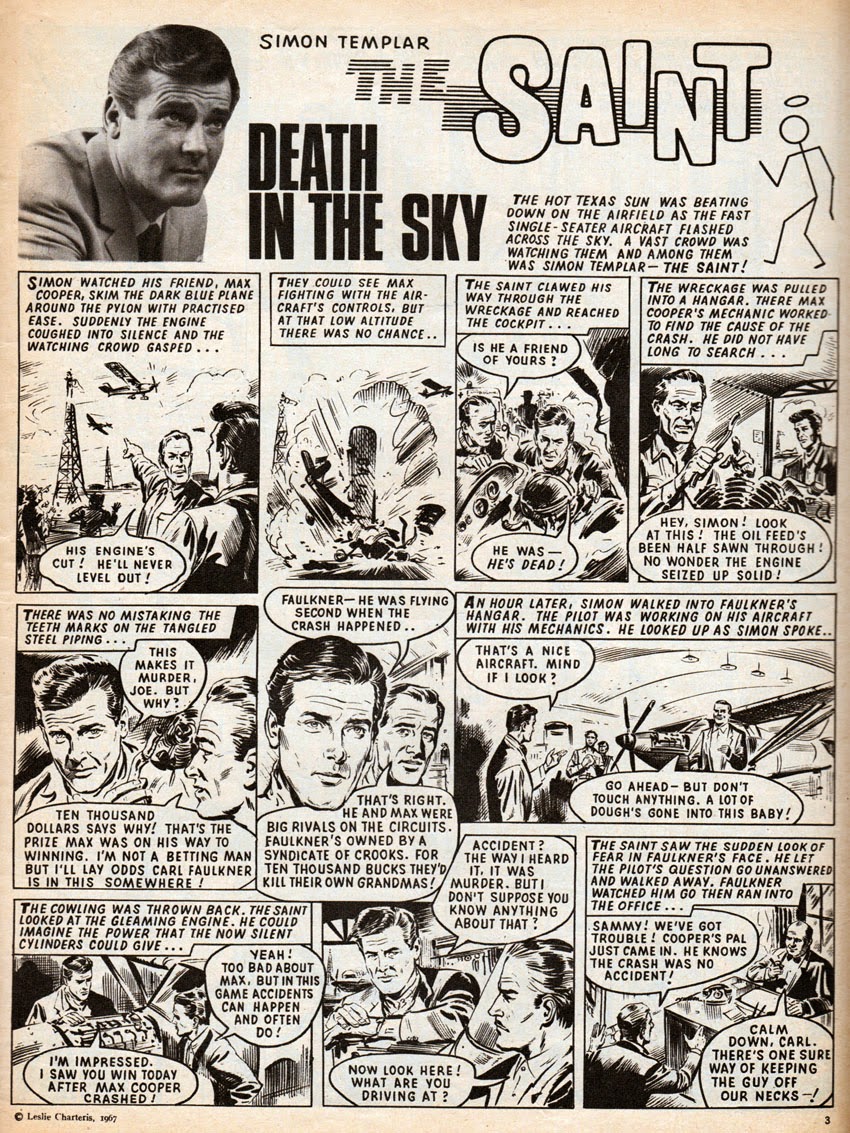 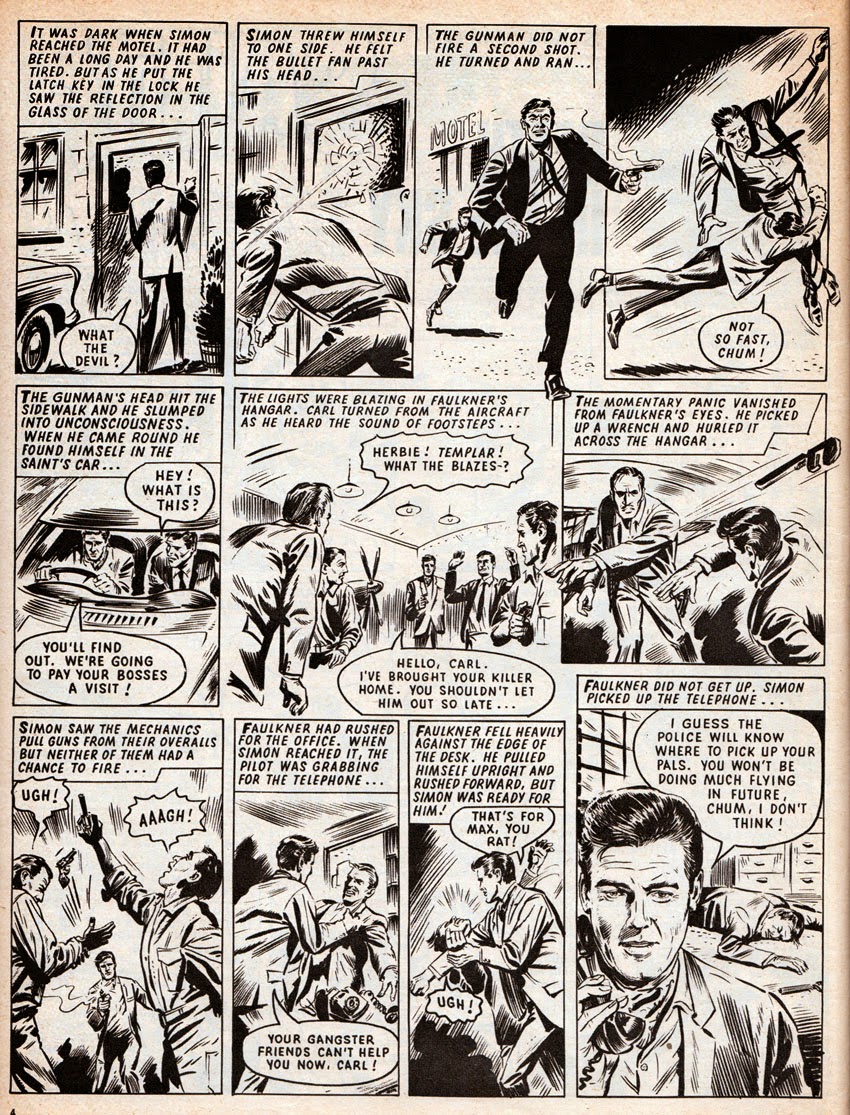 A new addition to the merged title was The Mysterons, in order to cash in on the Captain Scarlet and The Mysterons TV series which debuted on ITV that week. The first episode of this strip had appeared in the final issue of Solo the week before (see my previous post). Despite being drawn by Don Harley, one of the top artists of the day, The Mysterons was a strange concept for a strip. In the TV series, we only see the Mysterons as copies of the humans or vehicles they've destroyed, created by twin circular beams of light. The comic strip took the imagery literally, initially showing the Mysterons as beings of hooped light, then changing them into physical hexagonal beings! The idea behind the stories seems to be to emulate the style of The Daleks strip from TV21, but it really struggles to work and I can't imagine many readers really connecting with it. 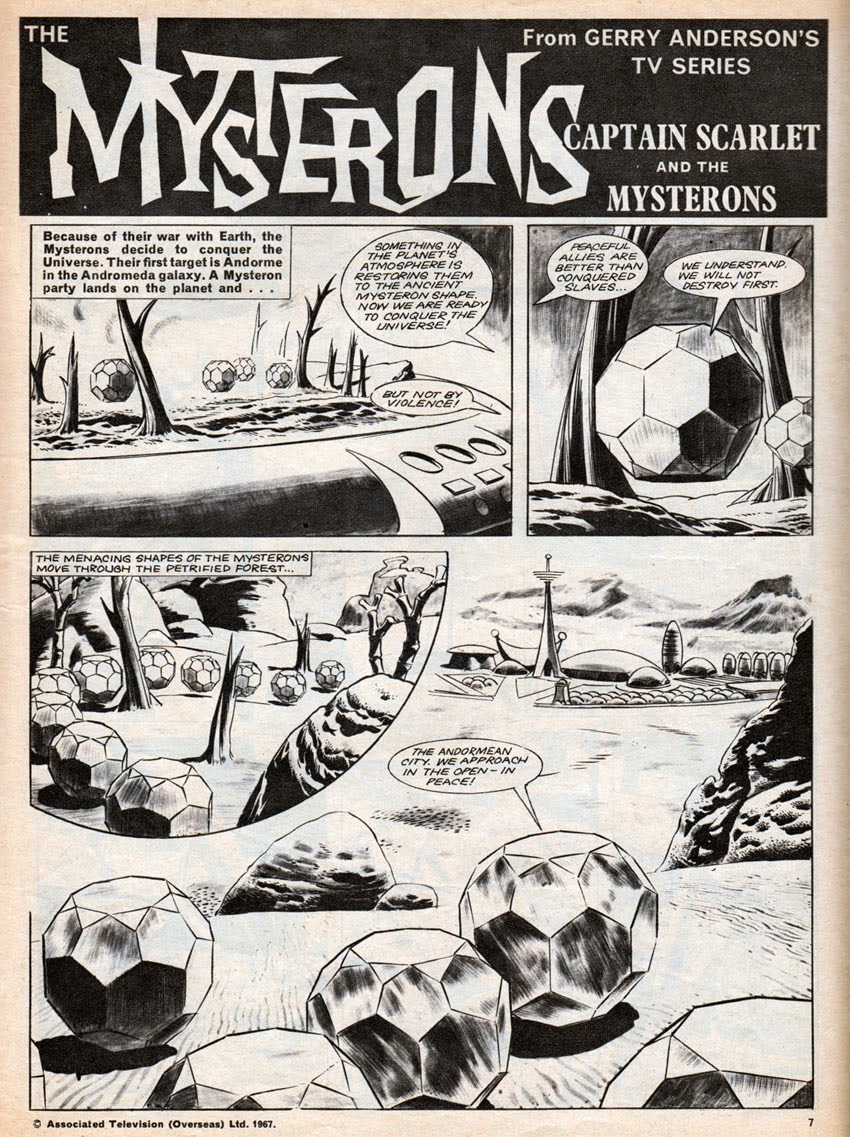 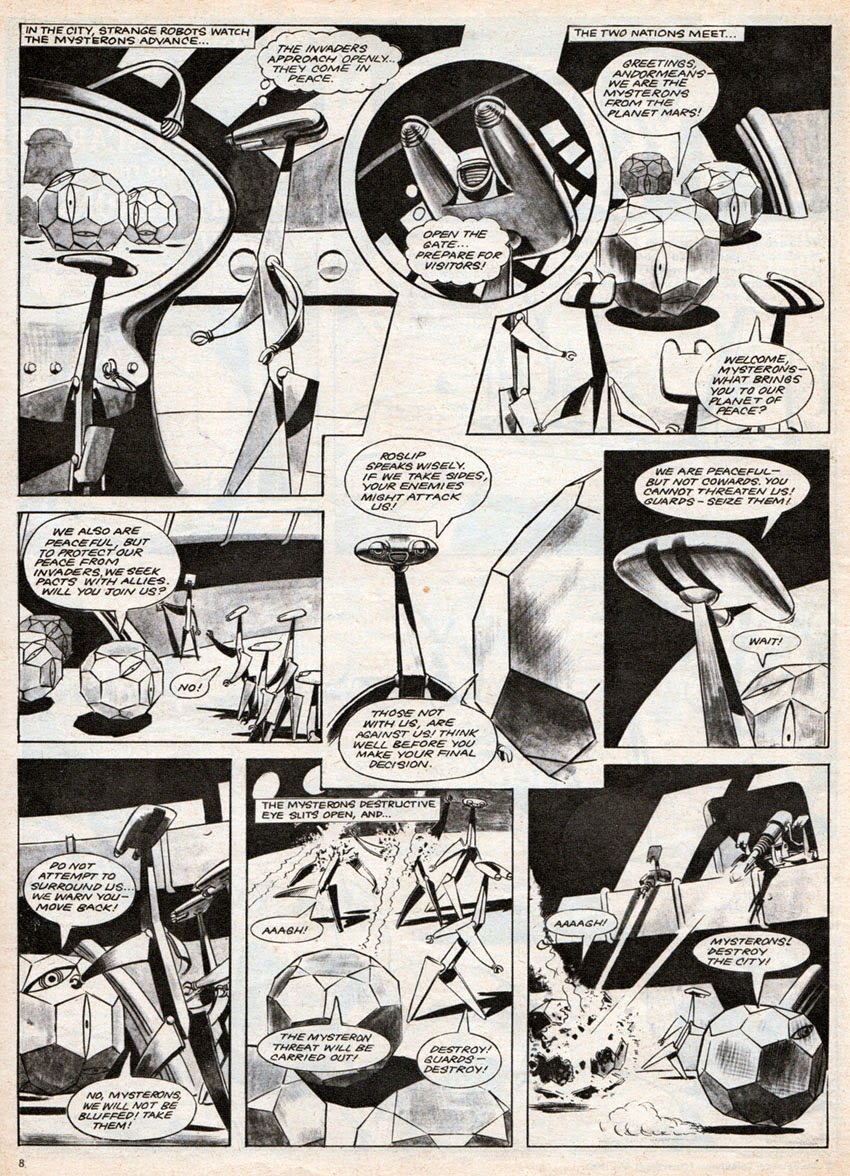 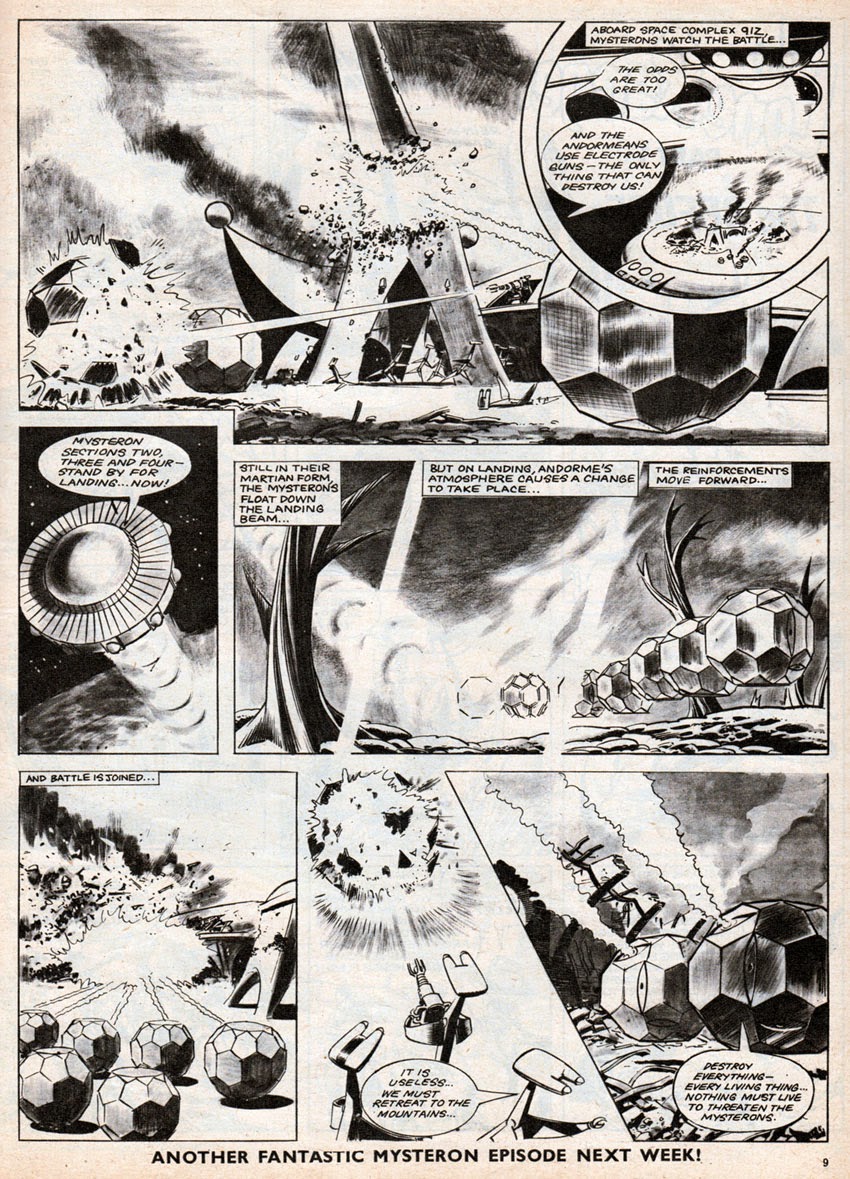 The editor of TV Tornado was someone who'll be very familiar to many; Mick Anglo, creator of Marvelman. He also illustrated some of the material for TV Tornado, including the Voyage to the Bottom of the Sea strip and some covers I believe. 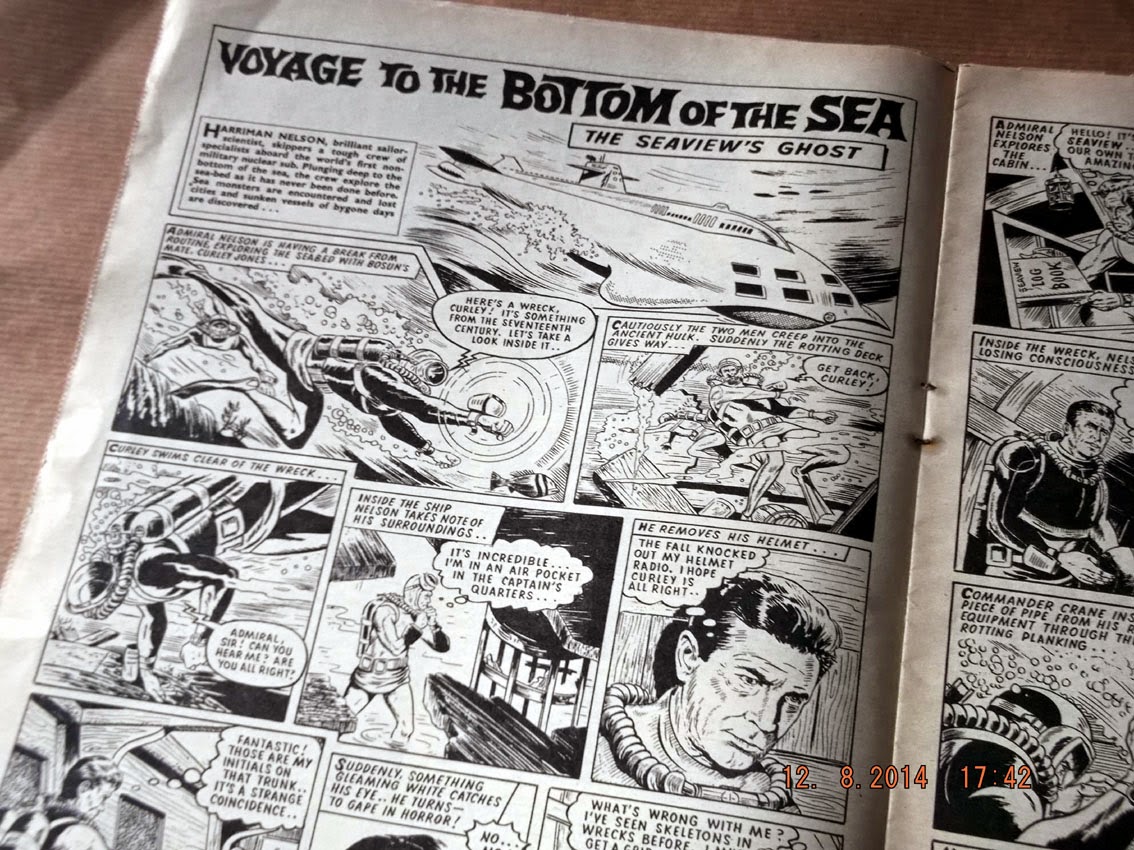 Brilliant post, Lew.Particularly because I was a fan of this comic and bought it every week. ( Was I the ONLY one? )I even liked the Mysterons own strips. I switched over to TV Tornado in protest to TV 21's not bringing the Daleks strip back! But when Smash got the Hulk and Pow and Fantastic came out I'm afraid TV Tornado got left behind too.

Well the Hulk started in Smash eight months before TV Tornado was launched, and Pow! No.1 came out just a week after TV Tornado No.1 (with Fantastic following a few weeks later). So it sounds like you didn't stick with TVT for long.

I think I only had issue one of TV Tornado. As you said, the Odhams comics were far more appealing. I see TVT was only 6d, when a lot of comics were 7d, so that was probably something in its favour, but it was Smash!, Pow!, Fantastic, and Terrific for me every week, plus Dandy and Beano. (I'd dropped Wham! in 1967, probably simply because something had to give due to the expense of having several comics every week.) Oh yeah. I had Topper for a while in 1967 too.

I remember this comic well but I wasn't a big fan of it and much preferred Smash and the Buster etc at that time - I remember loving the name of the comic (and still think its a cool name). Nice post again Lew, it brought back some nice memories.

You're welcome, Paul. I would have blogged about it before now but for some reason I thought I'd already covered it years ago. I hadn't though, unless a post has disappeared.

I liked the 'weather beaten' logo, and, yes, it's a cool name for a comic. That's about all I liked though unfortunately. I remember lobbing the 'Batchute' out of my bedroom window but I didn't have it for long so perhaps it blew into a neighbour's garden.

Fond memories of this one so thanks for posting it. I think most issues that I read in those days were bought at the local church fair. My first introduction to The Green Hornet.

This question isn't related to TV Tornado, but i can't find another way of contacting you.

I was wondering, how do you store your comics? and how do others?

I'm looking for a good way that allows easy access. My prefered method would be in a loose leaf type of folder with the comics in a plastic wallet.

I'm really only collecting the Beano so i was wondering if anyone has had any success in sourcing wallets of the required size of the Beano?

My email address is on my profile Richard if you click on it.

I don't bother storing comics in bags. Most of the ones I have are either piled up flat in boxes (every other one 'upside down' as it were to prevent spine roll) or upright in comic storage boxes. There probably are some wallets big enough for The Beano as it's A4 which is a standard size. Have you tried your local Rymans or looked online?

Ah! I'd tried the summer specials which are just slightly too large for the folders, but your right the Beano fits nice and snug.

Thanks for that, now to those specials....

This shows how time confuses your memory. I seemed to recall quite a gap between TVT and the Power comics, but I must have been buying them at the same time. Perhaps I dropped TVT when Terrific came out, as I did have quite a few issues.
Incidentally, my memory made a similar mistake with the year Wham came out. I would have bet money that TV 21 preceded it. And I would have lost.
Oh well, old age and all that...

Our perspective of time is different when we're young, probably because the world is fresh and new to us. I remember Pow! being around for ages but if course it was less than 90 weeks.

The Scarecrow feature was pesumably reprinted from one of Gold Key's three issues (a one-shot, I assume adapting the TV series) and two further issues... http://www.comics.org/series/1662/covers/

Talking of which, were Voyage to the Bottom of the Sea and Magnus, Robot Fighter also reprints from the U. S. Western/Gold Key series?
The TV Tornado annual I have appears to reprint a Gold Key Magnus story (edited for space and page formatting).

In answer to T Guy: TVT reprinted stories from Gold Key issues 1, 2, 4 and 5; there were also a bunch of "fill in" stories that looked home-grown. Issue 3 of the Gold Key run was split into two halves and appeared in the first two TVT annuals. Bizarrely, the second half of the story appeared in the first annual and the first half in the second annual; they were re-written slightly to create the impression they were two different stories, despite the face that both featured the same giant robot menace! (The story was also cut down quite a bit from the original.)

Sometimes the comic would have a cover photo of characters not in the comic. One issue had the 2nd Dr Who (Pat Troughton) adorning it. I think another had Roy Thinnes (David Vincent) I think he was on too- I just had a few but never really got in to it i'm afraid. Nice that it has its fans!

Yes, it often had cover illustrations on TV stars that related to a tiny snippet about them inside, but not a comic strip. A bit deceptive, I thought.