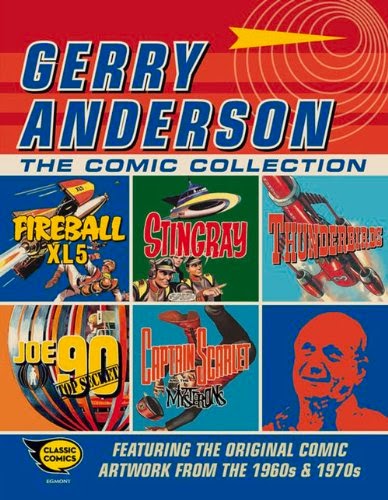 Over on his Down the Tubes blog today, John Freeman shows the latest images of the redesigned Thunderbirds craft for the upcoming new ITV series Thunderbirds Are Go! Looking good so far, with the models fairly close to the original iconic designs. (Except for TB5, but that probably needed updating the most.)

It reminded me that later this year Egmont UK are publishing two books that are sure to appeal to fans of Gerry Anderson shows. 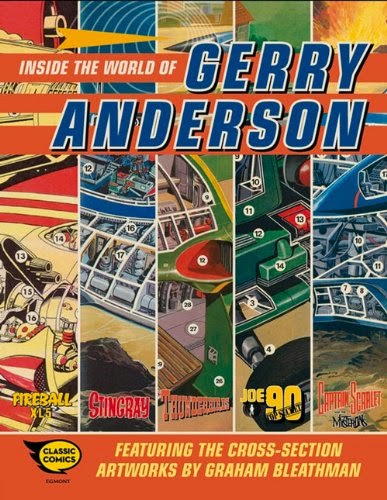 Inside the World of Gerry Anderson will be a 112 page hardback compiling Graham Bleathman's superb cutaway illustrations of vehicles and craft from various Gerry Anderson shows. The artwork originally appeared in Egmont's Thunderbirds the Comic in the 1990s.

Both books are currently available for pre-order from Amazon.
Posted by Lew Stringer at 12:19

I never liked Space:1999 but I think it was partly to do with me being 16 or 17 at the time and having other interests, and partly because it wasn't as slick as, say, Star Trek. I should watch it again and judge it on its own merits.

I've never seen the whole series of Joe 90 in colour. I watched them back in the sixties in black and white and haven't seen them since. I bought the box set a few years ago but have only watched episode 1. I must find time to watch the rest soon! I can't remember any of the plots as it's been so long, so it'll be like watching them for the first time.

Will you be watching the new Thunderbirds series, Lew?

The sets of the show look amazing.

Yes, I'll definitely watch it if it's broadcast on Freeview. I enjoyed the remake of Captain Scarlet that was done several years ago so I'm looking forward to it.

That Captain Scarlet remake was great: show-to-show continuity, characters with depth and personality, a great episode where Black struggles to free himself from Mysteron control... what a pity that hardly anyone saw it, as it was buried within an awful Saturday morning Tiswas knock-off. I hope the new Thunderbirds is as good - and gets scheduled properly.

Yes, I gave up with New Captain Scarlet on TV because ITV treated it so badly, splitting each episode in two and burying it in that forgettable kids show. I bought the DVD release though, where the episodes could be enjoyed properly. Did you buy that Steve?

You know, I never did, but I've got a birthday coming up soon, so...
I did recently get Land of the Giants on dvd, and that stands up well, some of the later episodes were well weird. And to bring this back to comics, Gerry Haylock's LOTG strip in the Joe 90 comic was gorgeous. Wish that had been collected.

It's been confirmed to air on Citv on Freeview!

Thanks BM. That'll be early then. The original series was transmitted at 7pm in the evening!

Steve, I haven't bought the LOTG set. I already have so many box sets to watch I've called a halt to buying any more for now. Yes, it's a shame the non-Anderson material from those comics hasn't been collected. I'm surprised no one's ever reprinted those Star Trek strips. Admittedly it often veers wildly away from the TV show in several aspects (not least being Spock's character, who is more emotional in the UK strip) but I'd have thought there'd be an audience for a collected edition.