Panini unleash Deadpool! Guardians! And the return of an old Marvel UK character... 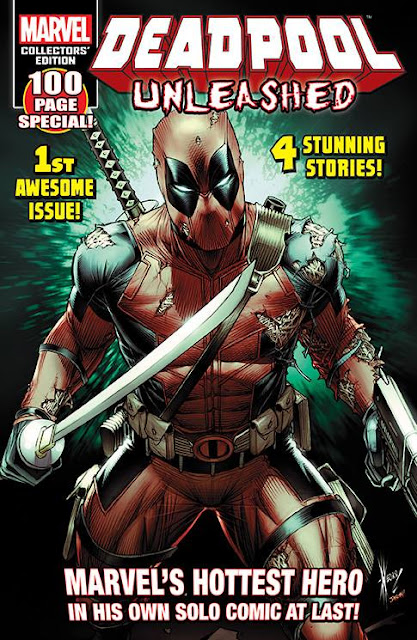 I'm just catching up with blogging after my trip to Northern Ireland (a report on the great Enniskillen Comic Fest will follow). Last week, Panini UK launched a new title in their Marvel Collectors' Edition line to replace the now-defunct Incredible Hulks. Are you ready for Deadpool Unleashed?

Issue No.1 of Deadpool Unleashed has 100 pages for £3.99, in a squarebound graphic novel format on a higher quality paper stock, making it great value as it's the same price as the other comics in the line which have 76 pages. Here's the official info on the comic, along with the details of its companion comics that are in the shops now...


DEADPOOL UNLEASHED #1. On sale now!
100-page special! The newest Collectors' Edition is here!!! Deadpool's solo comic begins with a series of all-new amazing stories! £3.99!
Deadpool and the Mercs for Money clash with the Crazy Gang! By Cullen Bunn and Salva Espin!
Deadpool faces his rival for Death's love – the cosmic villain Thanos! By Tim Seeley and Elmo Bondac!
The original Secret Wars saga is retold – but this time Deadpool’s in it!
Featuring material first printed in Deadpool: Mercs for Money #1-2, Deadpool vs Thanos #1 and Deadpool’s Secret Secret Wars #1. 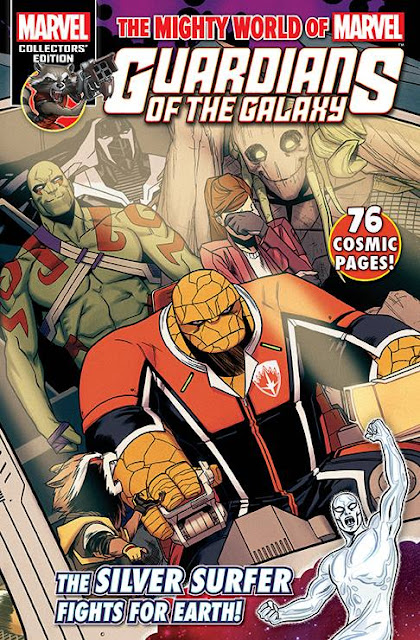 MIGHTY WORLD OF MARVEL #8. On sale now!
76 pages of Marvel Universe action! £3.99!
The Guardians of the Galaxy take on Hala: a warrior sworn to avenge the death of the Kree homeworld! By Brian Michael Bendis and Valerio Schiti!
The Silver Surfer and the Thing fight to save Earth from the Surfer's own people! By Dan Slott and Michael Allred!
The Inhuman dog Lockjaw tackles the evil mercenary Mad Dog! By Scott Gray and Gurihuru!
Featuring material first printed in Guardians of the Galaxy #2, Silver Surfer #3-4 and Tails of the Pet Avengers #1. 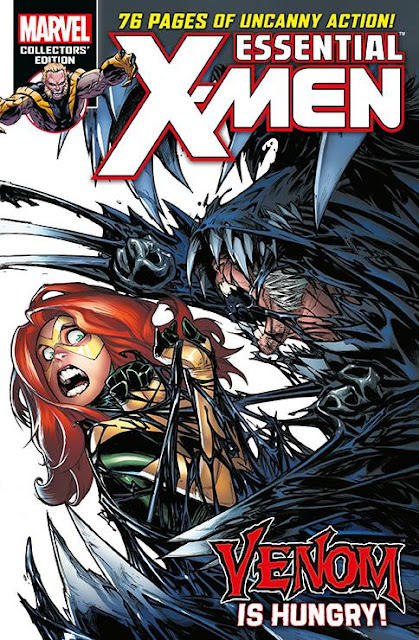 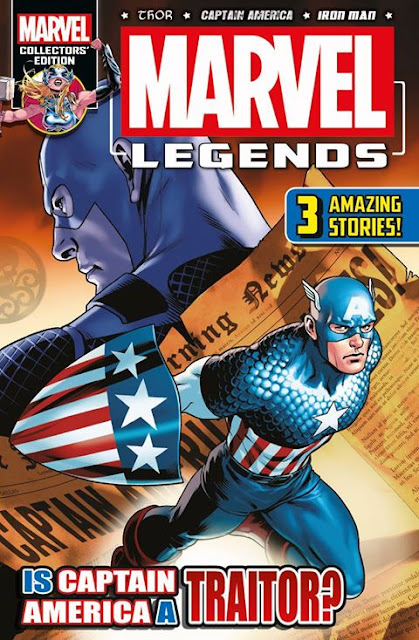 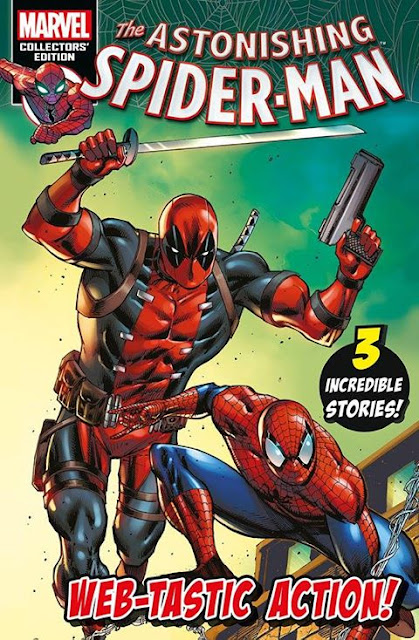 Astonishing Spider-Man Vol.6 #19. On sale now.
76 pages of Astounding Action-Packed Arachnid-Adventure! Only £3.99!
‘Before Dead No More’ continues! Someone close to Spidey is gonna die and Peter must decide between his duty as Spider-Man and Peter Parker!
Also: Deadpool becomes a stage magician?!!
Plus: Yikes! Spider-Man and Silk have gone back in time and accidentally stopped their own origin from happening!
By Dan Slott, Giuseppe Camuncoli, Penn Jillette, Scott Koblish, Robbie Thompson and Todd Nauck. 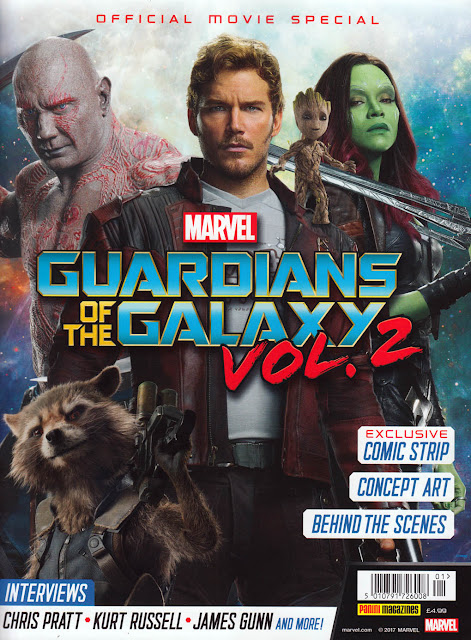 GUARDIANS OF THE GALAXY Vol.2: OFFICIAL MOVIE SPECIAL
On sale now. £4.99
68 page magazine with photos and profiles of the main characters.
Interviews with cast members.
20 page comic strip by Marc Sumeran and Andrea DeVito in which the Guardians meet old Marvel UK character Death's Head! Never saw that one coming, yes?
First appeared in Guardians of the Galaxy: Dream On No.1, April 2017. 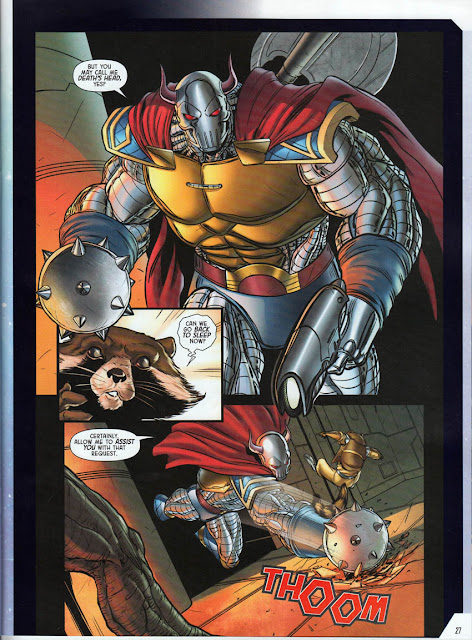 ...and finally, although I plugged it briefly last week, here's more details of the latest Doctor Who Magazine... 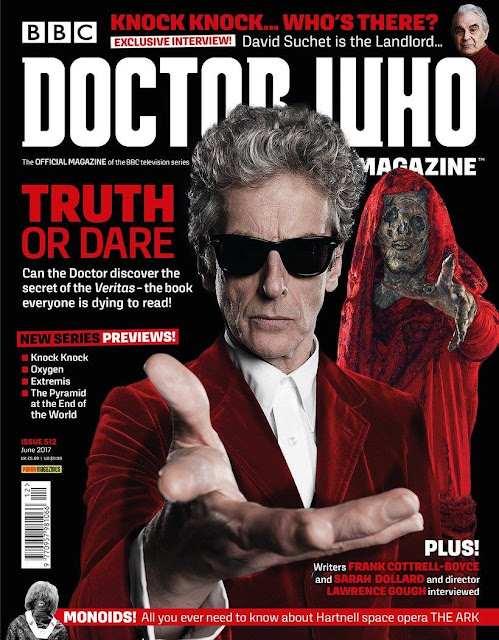 DOCTOR WHO MAGAZINE No.512. On sale now.
FOUR NEW EPISODES ARE PREVIEWED IN ISSUE 512 OF DOCTOR WHO MAGAZINE!
There’s an exclusive interview with guest star David Suchet who plays the enigmatic Landlord in Knock Knock…
"I suppose I so became so associated with Poirot," says the distinguished actor, "but when they invited me to Doctor Who, I said yes before I'd even read the script!"
Why?
"Because it's Doctor Who! It's the most iconic series, even more so than Poirot. To have that opportunity was the greatest privilege."
ALSO INSIDE THE ISSUE…
Posted by Lew Stringer at 23:06

I must admit I am well impressed with the new series of Dr Who so far. I can actually understand what's going on!

I really enjoyed the first issue of Deadpool Unleashed.

I am still concerned about overexpose - I'd love it if Wolverine and Deadpool became something such as Wolverine and Cable (or a rotating slot) - but the tales are very good. It was a pleasure to see Thanos. And reading about Deadpool's perspective of Secret Wars, that was fun, too.

I'll be buying this one.

Incidentally, I know Panini would not be in a position to reprint it, but it's a shame Marvel US and DC can't give me a Harley Quinn/Deadpool crossover.

And speaking of DWM, I know the licensing would make it impossible, but I'd love to see a comic strip featuring the Doctor teaming up with the likes of Reed Richards.