The Day They Changed Smash! 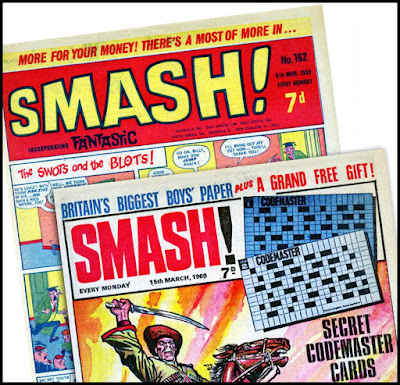 It's almost 50 years to the week when IPC totally revamped Smash! into an almost unrecognisable comic. The new-look Smash! had its fans, but the changes were a step too far for some of us. I eventually warmed to it, but the unique comic it had been was sorely missed.

A few years ago I blogged about the changes, and if you missed that article you can read it here:
https://lewstringer.blogspot.com/2017/03/the-big-smash-revamp-of-1969.html

Incidentally, I've put The Swots and the Blots into a cameo appearance in the all-new Cor!! and Buster Special, on sale 17th April!
https://treasuryofbritishcomics.com/catalogue//B0011

Email ThisBlogThis!Share to TwitterShare to FacebookShare to Pinterest
Labels: Smash

Funny, I just pulled the first new look issue of Smash! out of storage along with some earlier editions and Pow! and Wham! Back in the day I found the change a sharp jolt but enjoyed some of the new strips.

I accepted it at the time but only stuck with it for a few weeks. Then I started buying it again a year later and enjoyed it more, sticking with it until the end, and into its merger with Valiant. However, comics like that never got a look in with me when the Odhams titles were around, but by 1970 I realised those style of comics were not coming back so I settled for IPC.