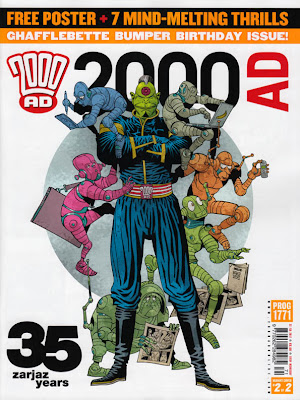 When 2000AD was launched in 1977 very few expected the comic to survive this long. Least of all the editors, which is one reason they gave it a then "futuristic" title which would date as soon as we entered the 21st Century.

For years, speculation to the point of tedium imagined that the comic would be re-titled 3000AD by now, but the comic wisely stood its ground. After all, what's in a name? "Viz" is a nonsense word, "Dandy" and "Beano" are archaic terms, but the comics soldier on regardless.

Here we are then, at 2000AD's grand 35th anniversary, and the special bumper edition out today delivers the goods. There's a slight price increase for this week to £2.60 but for your extra 25p you get 20 extra pages featuring bonus stories reviving two old characters plus previews of strips to come. There's also an excellent free giant poster by Chris Weston featuring a gathering of characters from past and present.

Chris Weston's artwork is also used for one of the choice of covers to this issue. The other cover being by Mick McMahon. Yes, one of the original greats is back for this special edition and as ever, Mick's work is stunning. He's reinvented himself several times over the years and every time his style advances into a new direction that works brilliantly and uniquely. It's been said before, but Mick is an artist's artist. One of the giants that are always going to be leagues ahead of the rest of us.

I felt that one downside of the issue was that most of the strips are in mid-serial which may be confusing for new readers picking up this anniversary edition. I'd have thought it might have been better to have this as a 'boom issue' as we used to call them, with all strips kicking off at the start of new serials rather than with parts 7 or 9. Perhaps it wasn't possible to schedule for that.

But that's a minor quibble. The main thing is this is a very good issue indeed, and good value too, so if you haven't bought a copy yet, rev up your jetpack and get to your local thrill-merchants now!

Mick McMahon has a website, and it's brilliant:
http://tuggingyourcoat.com/

You can see Mick's preliminary drawings for the cover here:
http://tuggingyourcoat.com/2012/02/21/tharg-cover/

I've never made a secret of it, and i won't go on too much, but i was never a fan of Mick McMahon purely due to Sonic. To me, his work was very flat, he added lines that the looked out of place, he made sonic frown more and more then other artists, and that was a bad enough mistake in the first place for someone with a 'devil may care' attuide (Often shorted to just say the Hedgehog with Attuide). However, I been given a chance to see his 2000AD work and it's great for THAT, but for Sonic? his work always felt very out of place, didn't seam to have a range of characters (backgrounds and sometimes main one-off characters were one of 3 pre-set designs that i never really figured out what animals they were meant to be anyway). And later then they laid off staff of good artists, and fell back on his work? it annoyied me, and annoied a number of people i know. However, Like i said, seeing his 2000AD work, it's different, it is something his work suits. Really, I think it he was just badly selected to be a Sonic Artist, when he could have done other work. It probebly the same as getting Boris Vallejo to draw Little Dot.

But, like i said, i've seen this 2000AD work and the like which fits him like a glove and i've come to enjoy this work in this field.

I never fully understood the name '2000AD' since most of the stories didn't seam to fully support this name as they were later then that, or sometimes before that.. Never been a big fan of the comic to tell the truth, My favorite strips were probebly the 3 based on the Stainless Steel Rat stories, though i noted a fairly major art problem with him NOT changing looks that much, when he is meant to have face reconstruction.. still good though.

I found it weird that it wasn't a jumping-on prog too, I imagine a few potential new readers will be checking out the comic in the wake of all the 35th birthday publicity. Still, a great issue, and it's great to see Mike back on board for the cover.

Manic, artists were never on staff. They were freelancers working from home. I accept you didn't like Mick's style but personally I was over the moon with the scripts of mine that he illustrated. I understand Mick really enjoyed working on STC, particularly working with Nigel Kitching on Decap Attack.

As for the title '2000AD', it was chosen because, in 1977, it still sounded futuristic. It wasn't intended to be about the year itself, which is why most strips were (and still are) set in various eras.