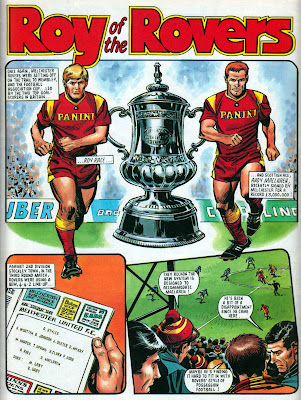 Sad news just in. Mike White, artist of numerous British adventure strips passed away at the weekend after a long illness.

Mike's first regular strip was Jackaroo Joe for Valiant about a swagman from the Australian outback brought to the UK, preceding a similar plot in the film Crocodile Dundee by 21 years. Here's the first episode from issue dated 30th October 1965... 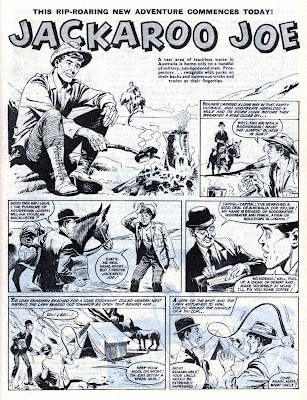 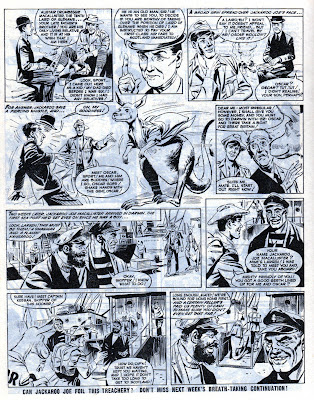 Mike White also drew many other series for Fleetway/IPC including Cannonball Craig for Score 'n' Roar and The Team Terry Kept in a Box for Lion. Here's the final episode of that strip from the last issue of Lion in 1974... 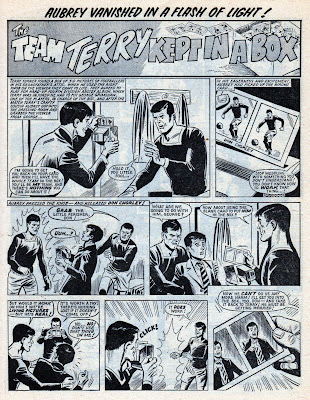 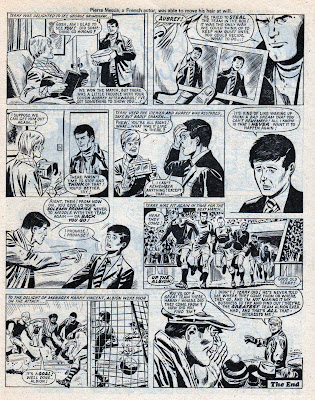 Mike also illustrated various strips for DC Thomson (usually one-off stories). His solid, professional style made him ideal for the boys' adventure comics. In 1976 the artist developed a grittier edge to his usually clean inkline when he illustrated Hell's Highway for the tough new IPC weekly Action. 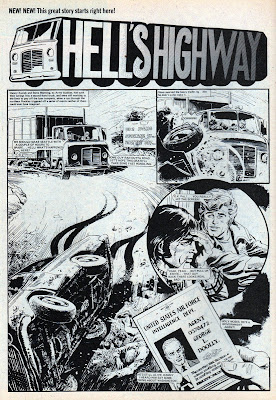 Mike also used that darker, more detailed style of artwork when he became the artist of Action's most controversial series, Kids Rule OK. From the outset (shown below) this was one of the most brutally violent strips IPC had published and it (and other strips) led to the public outcry against the comic which saw Action suspend publication for several weeks to return in a diluted form. 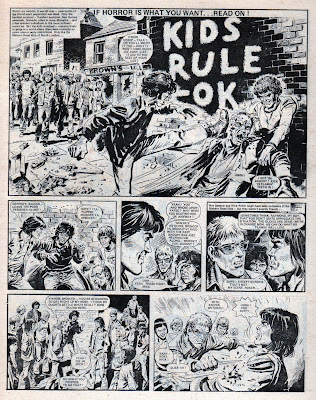 Many comic fans will be most familiar with Mike White's work on 2000AD, particularly his collaboration with writer Alan Moore on the Time Twisters story The Reversible Man. This memorable complete story told of a man literally living his life in reverse. The story appeared in 2000AD Prog 308 in 1983. 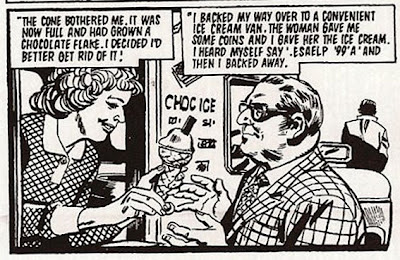 Mike also had a popular run on Roy of the Rovers for six years, bringing a new dynamic energy to the strip. He also illustrated various stories for Commando, with his most recent work appearing last year.

Able to master both black and white and colour work Mike White's powerful images were perfect for British adventure comics. I'm sure that comic scholars with broader knowledge of Mike's work than I will soon be paying their tributes to the artist elsewhere with more details of his long and impressive career.

Yesterday on his own blog, artist Mike Perkins wrote: "I've had the honour to go drinking with Mike a few times and had always found him to be a lovely bloke - with a curmudgeonly streak - accompanied by a plethora of tales. He arrived in London during " The Swinging Sixties" and, by his accounts, he made the most of it - regaling me with tales of drinking Oliver Reed under the table and another, unmentionable tale, involving Felicity Kendal! It's my belief that he was in love with the theatre and felt compelled to pursue this as a career. I have no idea why he didn't but am glad that he chose the path he did - enriching so many lives with his artwork even if he himself believed he left no lasting impression unlike those talented "kids" Bolland and Gibbons. I like to think that, in our times drinking in the Lord Salisbury pub, I had persuaded him, just a tiny bit, that his work was, indeed, influential on, at least, my life."

My sincere condolences to Mr White's family and friends for their loss.

More information on Mike's work is on this page written by Steve Holland:
http://illustrationartgallery.blogspot.com/2011/06/mike-white.html

Email ThisBlogThis!Share to TwitterShare to FacebookShare to Pinterest
Labels: Action, Mike White, Roy of the Rovers

I mostly know Mike Whites work from Sonic the Comic, he did the Golden Axe Strips artwork, and the cover the featured them (issue 5, back in 1993). He also seamed to do something pretty uncommon and did all the artwork for the 1996 Knuckles Knock-Out Special. Odd for someone that wasn't a main Sonic artist to do that but it worked pretty good, and it was interesting that Carl Flint was given the cover but no inside story.

He was a good artist and from what i know of him, many will miss him.

I was familiar with him for his Sonic The Comic work too. Didn't he draw the cover to issue 1?