Surviving in the 21st Century 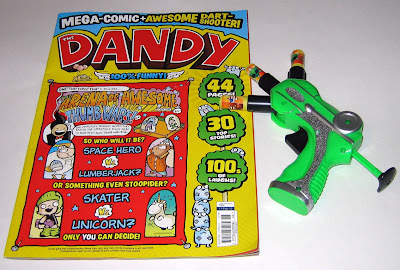 This week's issues of both The Dandy and The Beano add 8 extra pages and come with cover mounted toys. They also have increased cover prices, adding a pound to the regular prices of each comic. Readers may have slowly become accustomed to this as a part of modern marketing technique (the cover mounts are no longer called "free gifts") but what's caused the most consternation this time is that The Dandy is skipping a week, and the next issue won't be published until February 22nd.

Naturally this has brought about concern from some readers, fearful that it may see The Dandy return to the fortnightly frequency it had during its Xtreme run of 2007 to 2010. However, fans can rest assured that this isn't the case. The weekly frequency, and usual price, will resume next issue.

It's gradually becoming an accepted norm in comics now that special-promotion issues are published in relation to school holidays. The theory being that you do a special issue (with more pages and cover mounted or bagged toys) that's on sale for a week or two longer, presumably with the potential of selling more copies. This may be a new development for The Dandy, but Toxic and some other titles have been doing it for a few years now and apparently it works. It was inevitable that other comics would follow suit.

The downside of this of course is that it means slightly less issues per year, and less income for the artists (unless we're lucky enough to compensate for it on other comics). There's also a risk that if there's too much of a gap between issues you'll lose reader loyalty, which is the reason IPC, DC Thomson, etc never did monthly comics years ago. (A month seems a lonnng time to wait when you're a child.) However it's hard to argue against a marketing technique that, these days, seems to pay off, and if it increases the sales of a title in the long term then it's better for all concerned. 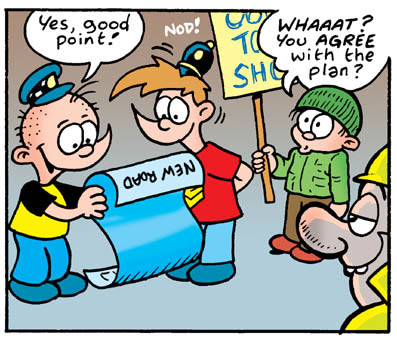 Readers and creators who have followed comics for several years will understandably be dismayed by this, but publishing comics today is far tougher than it was in the 20th Century. We'd all prefer to see British comics return to the way they were in our youth, both in presentation and marketing, but the realities of publishing and retail aren't sympathetic to that. Much as I hate the term, the "business model" has changed. Time moves on, and the best that comics can do is to adapt, adjust their budget, and find ways of staying viable whilst getting on with the main task of entertaining the readers.

Strangely enough, American publishers operate with a completely opposite marketing technique. Several titles from Marvel Comics have increased their frequency in order to boost finances. Amazing Spider-Man is regularly published twice a month now (as is the UK edition Astonishing Spider-Man) and some other US titles also double up some months. Of course the readership of Marvel Comics is older than that of The Dandy and they're more invested in a soap-style "fix" so the more "episodes" the merrier. (Although some Marvel readers have expressed concern over the affordability of the increased frequency.)

Like anything, comics have to adapt to survive, and if the occasional boom issues/skip weeks work then we all benefit in the long run. After all, absence makes the heart grow fonder, so when The Dandy returns in two weeks time, give it a big hug.

Subscribe and avoid price boosts by getting 15 issues for only £15: http://www.dcthomsonshop.co.uk/Group-Dandy.aspx

Email ThisBlogThis!Share to TwitterShare to FacebookShare to Pinterest
Labels: The Beano, The Dandy, Toxic

It's not the frequency I object to but the increasing number of reprints and filler. I know for a fact that artists are trying to break into comics so there's no excuse for it.

Actually there are sound financial reasons for it. The economy is in bad shape, magazine sales are falling, and every year the budget for new material is reduced. Editors have to work out how to make the best of this situation and reprints are usually the best option unfortunately.

Personally I don't think reprints help a great deal as that policy never saved comics such as Buster, Eagle and Sonic from their demise (and some say it may have hastened it) but what other solution is there?

Some critics blame the editors but it's out of their hands. They'd be more than happy to fill the pages with brand new material but they have to keep the comic within the budget they're given. And the people holding the purse strings are simply trying to keep the business afloat.

As for "filler", or feature material, (spoof ads etc), usually such pages in The Dandy are brand new anyway, so should be counted as such.

Nothing wrong with the Madvertisements, they are new artwork after all. It's things like video game reviews that I don't like - I was glad the Dandy didn't keep that very long. It felt like they hadn't even bothered playing some of them.

I wouldn't have thought comic staff actually play with the toys and games they plug James. Not unless it's for a games mag anyway.

For Sonic the Comic, when they first started reprints I agreed with it. Reprinting old stories to highlight early appearances of Characters that were returning, or just to give new stories for readers that missed out was good, even if the real reason was budget. However, when the comic became all but one story reprint, that was very bad in my eyes. It was more going to lose people that gain them as alot of old fans turned off more. When it became 100% reprints, i couldn't see how that was a good business plan at all. While there are some new readers that hadn't read them, old time readers would be put off almost completely, and new readers would notice problems, mostly with the fact that Sonic was redesigned in a (in my view) bad style change with Green Eyes, Longer spines, darker blue, longer body, more human like shape etc. This kids would clearly see that wasn't anything like that Sonic they knew. And since the reprints were out of order, so you could often get a return of a character before it's first appearance, I felt that really put off alot of people.

But i can't see too much problem with what the Dandy and the Beano are doing. While there doesn't seam to be a big enough fanbase for the classic only titles, there is a large back collection of strips to reprint, which would be new for alot of the readers. Problem is, you need to balance it right. Too many reprints will put off todays readers, too little might not attracted yesterdays readers.

Something that it partly reminds me of is some old framing stories. Where you add a panel or two of modern new art where the character is remembering something from the past, or reading a book or something, which leads into the reprint. While it costs more to have that original panel or two, it can help seaway into the old content.

Oh, and Anonymous 1- I know a couple of artists wanting to break into comics, but they aren't interested in the ways people used to start. I might be wrong, but Mr Stringer started in fanzines and stuff that wasn't an earner, then built up. Too often, new comers want to start right into a full paying job. Maybe the Dandy might want to go more into that 'voting' system and have some wannabes submit free strips, which are printed completely free, and readers vote on which ones they think are good, so the staff at Dandy have a good idea which new people to hire. There would be problems, but it's far from a new idea.

That's right, Manic Man. Many of us back then started out in fanzines, either producing our own, contributing to someone else's, or both. It really was an excellent training ground, getting feedback, and a way of learning from one's mistakes.

A lot of people still do that of course, with their small press comics. The problem now is there are less opportunities for them to break into comics professionally, so it may take a lot longer.

On his blog indie publisher Terry Hooper says the Dandy editors should be sacked and its hard to disagree with him when they pull stunts like this. The comic HAS FAILED and needs new blood to reboot it and fast!

I can understand fans being passionate about comics but I'm appalled that anyone would demand that people should lose their jobs. And for what exactly? Making The Dandy funnier than it's been in years?

The reasons for The Dandy's low sales are numerous, related to it not being a licensed tie-in and not featuring free gifts more than anything else. As for this "stunt" as you call it, skipping a week and having a cover mount and higher price, - that's decided by the marketing department, NOT by the editors.

I'd like to see the critics produce comics that sell the numbers The Dandy does.