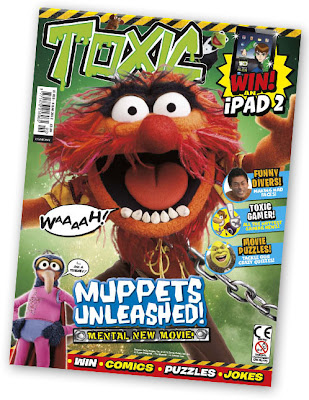 Just a quick plug for the latest issue of Toxic which is out today and on sale for the next three weeks. It's a bumper 48 page issue, bagged with a bunch of novelties for £3.99. That should keep kids quiet for a while.

Inside, there's numerous fun features and strips including a reprint of a classic Team Toxic story I did a few years ago. There's a couple of new pages by me too, in the form of the new I-Spy double page spread which this week has a football theme.

As it's a current issue I can't really show you the spread full size but here's a tiny version of it to give you a taster. The idea is similar to the Funny Find-It spreads I did for Egmont's Know How magazine several years ago, but a bit cheekier. 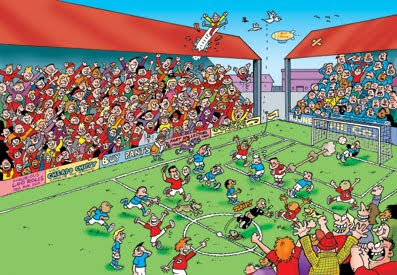 This year marks Toxic's 10th anniversary and the landmark 200th issue is only a few weeks away. More details on that soon!

Hi lew
Nothing to do with this post but i was watching rip off britain on BBC and the Beano was on there they were saying about the price change when there is a gift. If you want to see it im sure it's on iplayer. Its a shame that the beano has been publically show on tv as something that rips people off not a very good incentive for kids (and their parents) to buy the comic.

Yes, I saw it a few months ago. I'm sure consumer programmes do some good but when they run items like that, with no knowledge of the realities of publishing, it does no one any favours.

As they were filming in a newsagent you'd think they'd check the prices of other comics. Of course that would immediately deflate their claim of a "rip off" and they'd have to fill the time picking on something else instead. The BBC's own Doctor Who Adventures has had price increases at times relating to the amount of, or size of, the "gift" but perhaps the BBC's Rip Off Britain didn't want to mention that.

I noticed that one of the online critics has jumped onto this particular bandwagon.

Well, that's what critics do. They complained when every issue carried a gift and now Beano and Dandy have cut back on "gifts" to keep the price down on most issues they're complaining about the occasional more expensive boom issues. That whining noise is the sound of the Internet.

Meanwhile, the people with the actual experience in these matters are working to do the best they can for the comics industry. Some ideas might not work but at least it's better than doing nothing.

Toxic is a real success story. Amazing that it's been going for nearly ten years! Hope they'll be having a special Team Toxic adventure in issue 200.

Yes there'll be a new Team Toxic two pager in issue 200. I'll give more details in a few weeks.

Toxic has done really well to have outlasted so many other comics and I'm very proud to have been part of that since issue 1.

Even with the gifts, isn't the Beano the cheapest children's magazine? The BBC definitely didn't do their research there.

Toxic should be congratulated for lasting so long at a time when most children's titles are shortlived fads. Proof that original (rather than licensed) material works. In fact, it forced the Beano to drop it's "The UK's No1 comic" claim by outselling it! THAT's how successful Toxic has been.

That's right, James. Beano and Dandy are still the cheapest comics. Critics don't do their research.

Re: Toxic, although not a licensed title I'm sure the movie covers and features help sales. That said, the strips are popular too, proving as you said tbat non licensed strips can appeal.