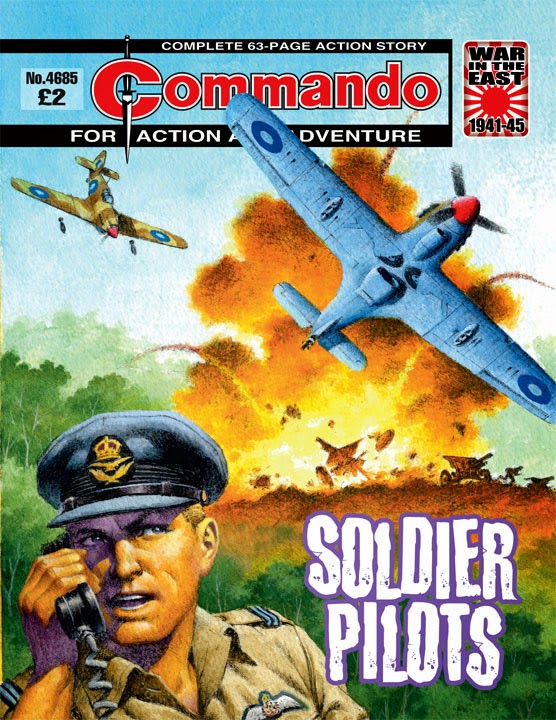 My thanks to Scott Montgomery at DC Thomson for the latest news about the issues of Commando that arrive in shops today. As you can see above, issue 4685 has a brand new Ian Kennedy cover. Great to see one of Britain's best adventure artists still working regularly.

Here's the info from the publisher about this week's releases...

As World War Two draws to a close, a British special forces unit engage in a secret mission far to the snowy north, aimed at halting German progress on new devastating weapons and bringing the war to a swift conclusion.
But the mission brings a bitter taste. As they compete to snatch a Nazi scientist, ally turns against ally as they battle in
The Cold War

From one German sentry to another went the whisper, “Achtung! Danger…Danger…Commando raid!”
But who can stop the men in the green berets?

Commando heroes have always been “everyman” heroes — without capes and superpowers. But, if you’d read the bares bones of what it’s proposed that our two Commandos will achieve, you’d be forgiven for thinking that it would take the efforts of two supermen (with a small s) to pull it off. Yet, such is the skill of the story-telling everything seems very plausible and believable. Frantic and breathless, perhaps, but very credible.
The plot is helped by some very accomplished black and whites. There are lots of small stylistic touches that add depth and movement. In some places they even give Ken Barr’s cover work a run for its money…and he’s got the advantage of colour.

In battle, a few seconds can be the difference between life and death. For ground attack pilots operating over combat zones, those few seconds can mean the difference between destroying his enemy…or his own side.
That was why pilot Flight Lieutenant Rudy Pendleton found himself on the ground, deep in the jungle. He was directing Allied aircraft on to Japanese targets, with split-second accuracy. And the stakes couldn’t have been higher — success was the only option. Failure would lead to the annihilation of Allied forces in the Far East.
Story: Alan Hebden
Art: Rezzonico
Cover: Ian Kennedy

Commando No 4686 – Beware The Traitor

Secret agents, hush-hush flights to Occupied France…as one of the pilots involved, Danny Cooper knew that too often the reception committee waiting for them was German. Someone on the British side was spilling the beans.
Years after the war was over, Danny was to be offered the opportunity to settle these old scores – far away from Britain or France…in the jungles of South America.