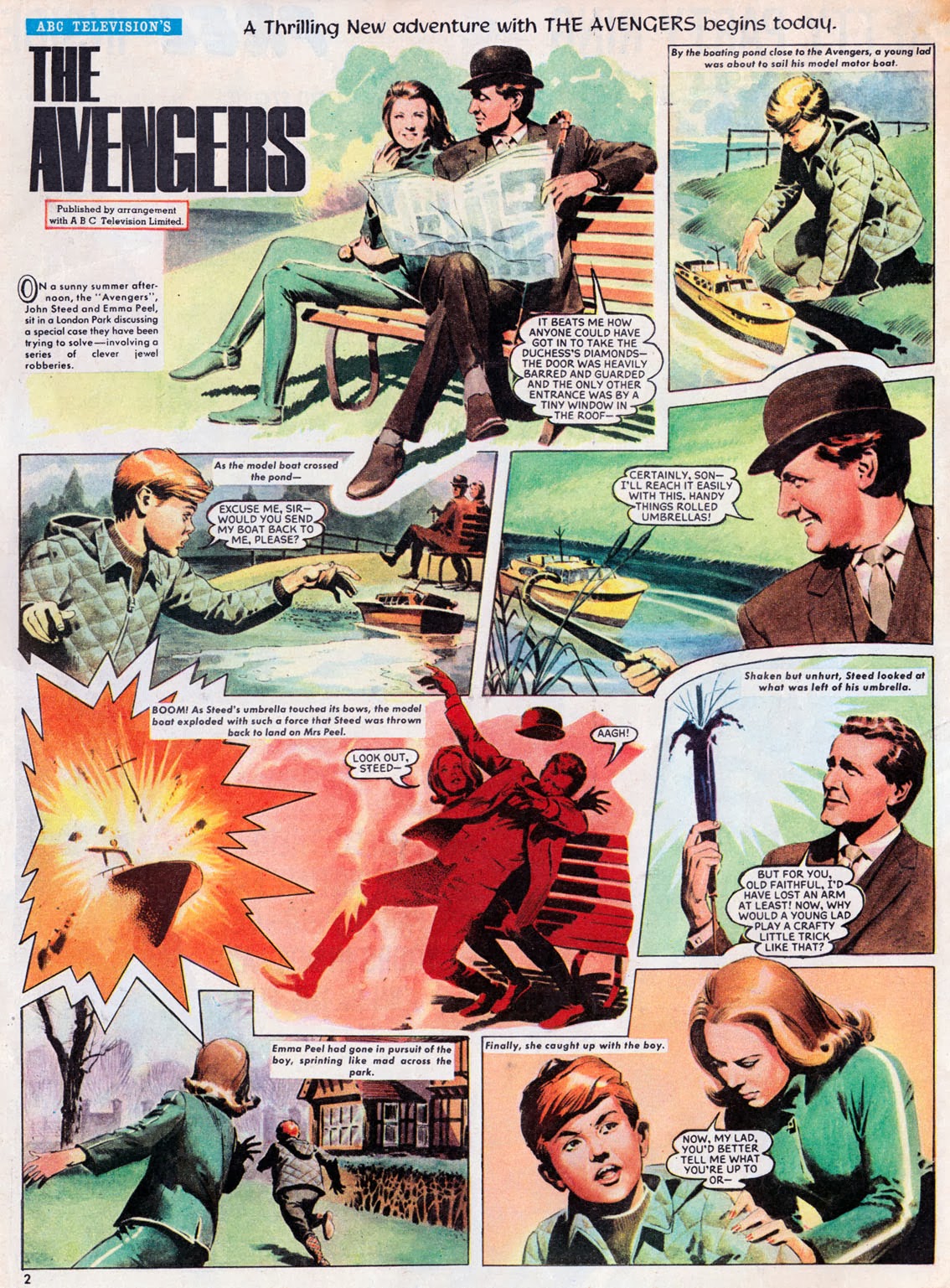 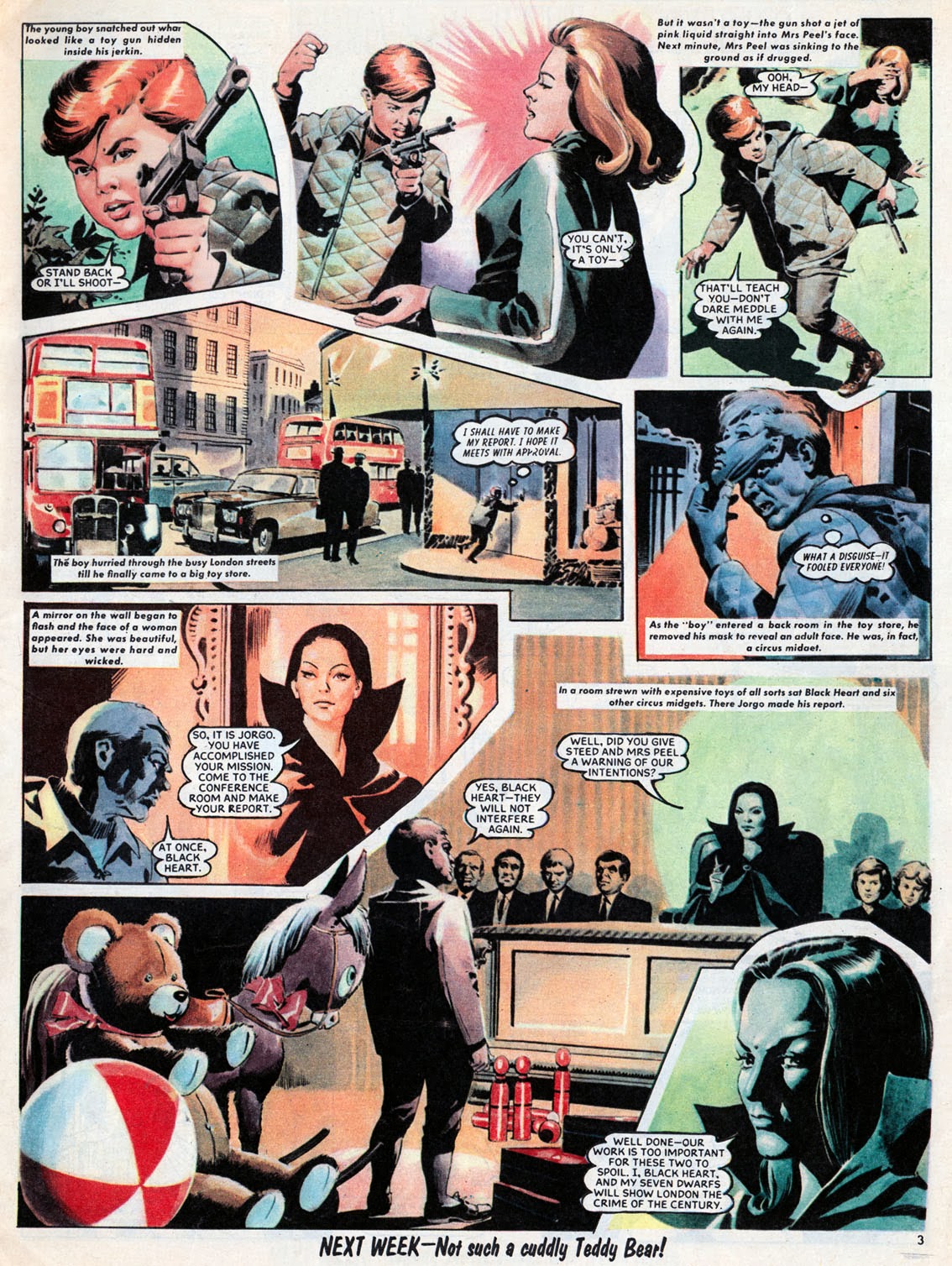 Diana was a weekly comic for girls that had a quality above most of its sister titles of the 1960s. Published by DC Thomson, its glossy, large size format had many pages in full colour at a time when most comics were on newsprint in black and white.

The luxurious photogravure printing process allowed artists to produce colour work with a full palette, rather than relying on flat, primary colour overlays to be added later, as in Bunty.

In 1967, DC Thomson gained an arrangement with ABC Television Ltd to adapt the top rated TV series The Avengers into brand new comic strip serials to run  in Diana. 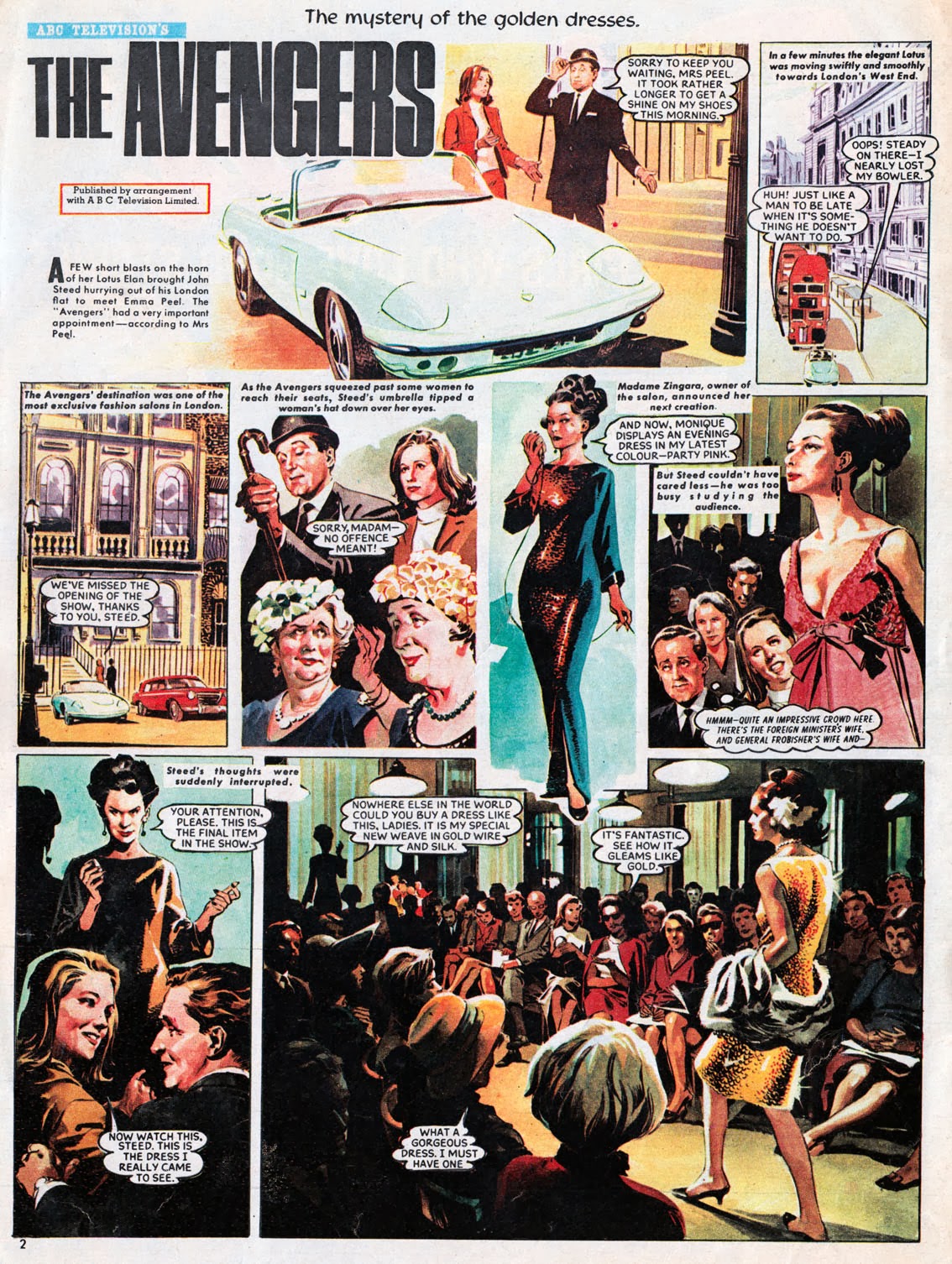 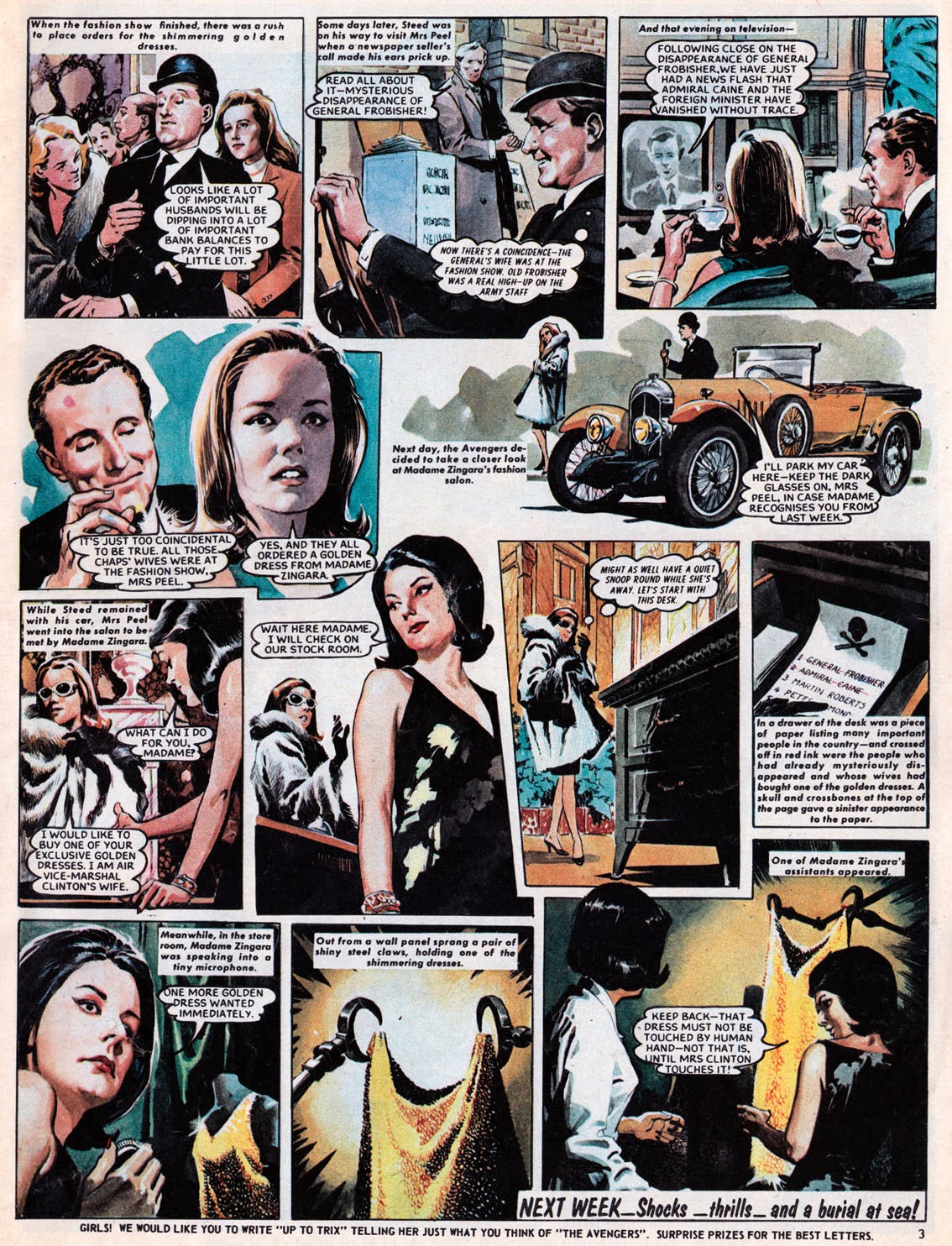 The strip ran at two pages a week, on pages two and three, from issue 199 until No.224. From what I can gather from the few I have, the scripts were understandably juvenile for Diana's young readership and never on a par with the wit of the TV series but the artwork was excellent. The main artist was Emilio Frejo, although he was assisted at times by Juan Gonzalez. Frejo could usually produce good likenesses of the actors Patrick McNee and Diana Rigg, although no doubt he was limited by the reference available to him in those pre-video days. 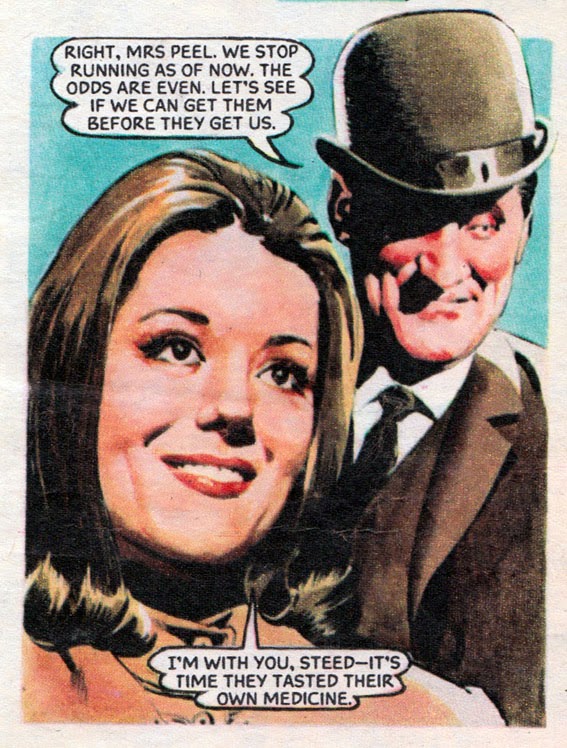 Here are a few episodes of the run from various issues of Diana in 1967. I'm not sure who'd own the rights to this strip now but I'm sure fans of the TV series and the artwork would like to see a book collection of the material. 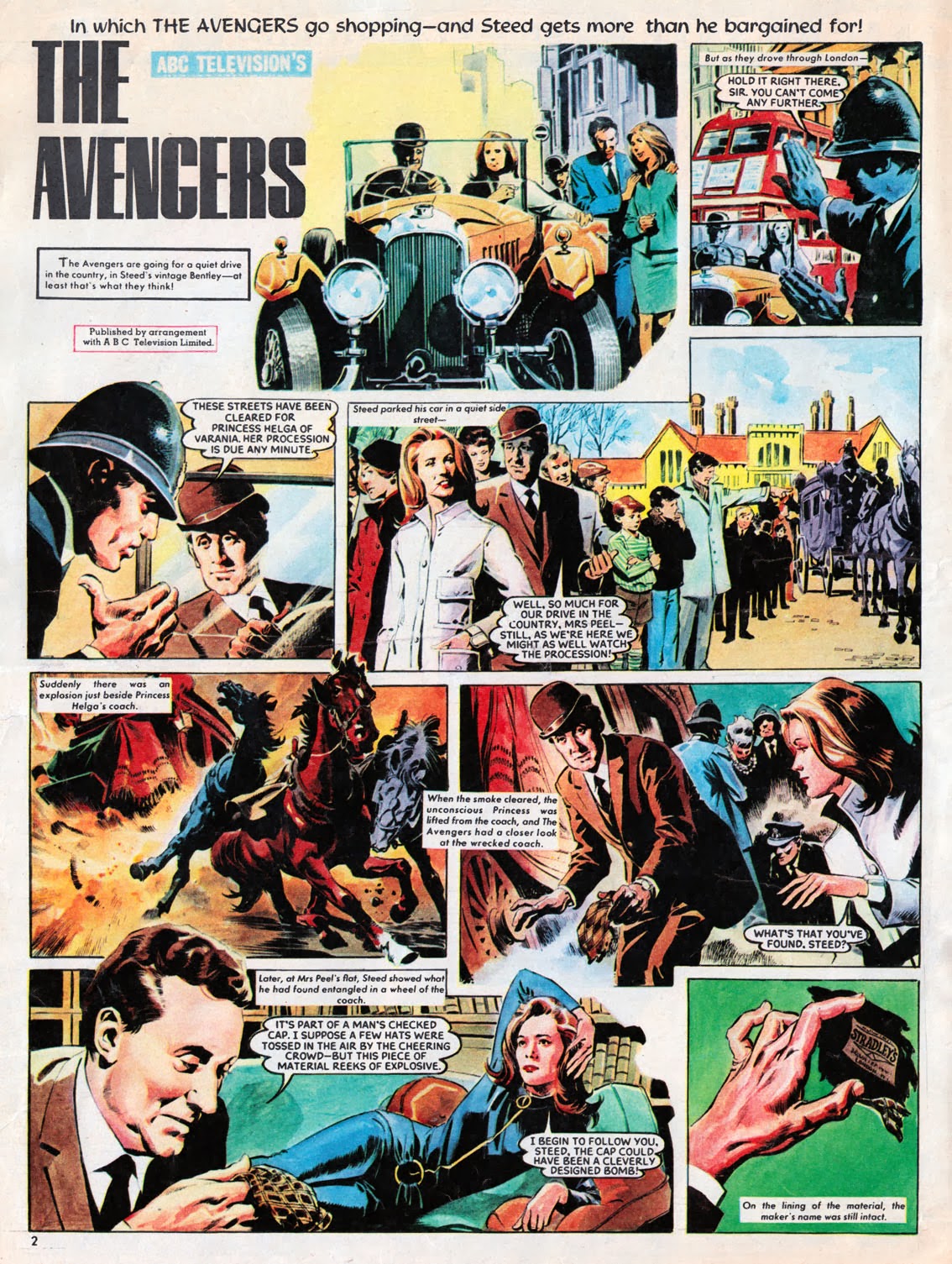 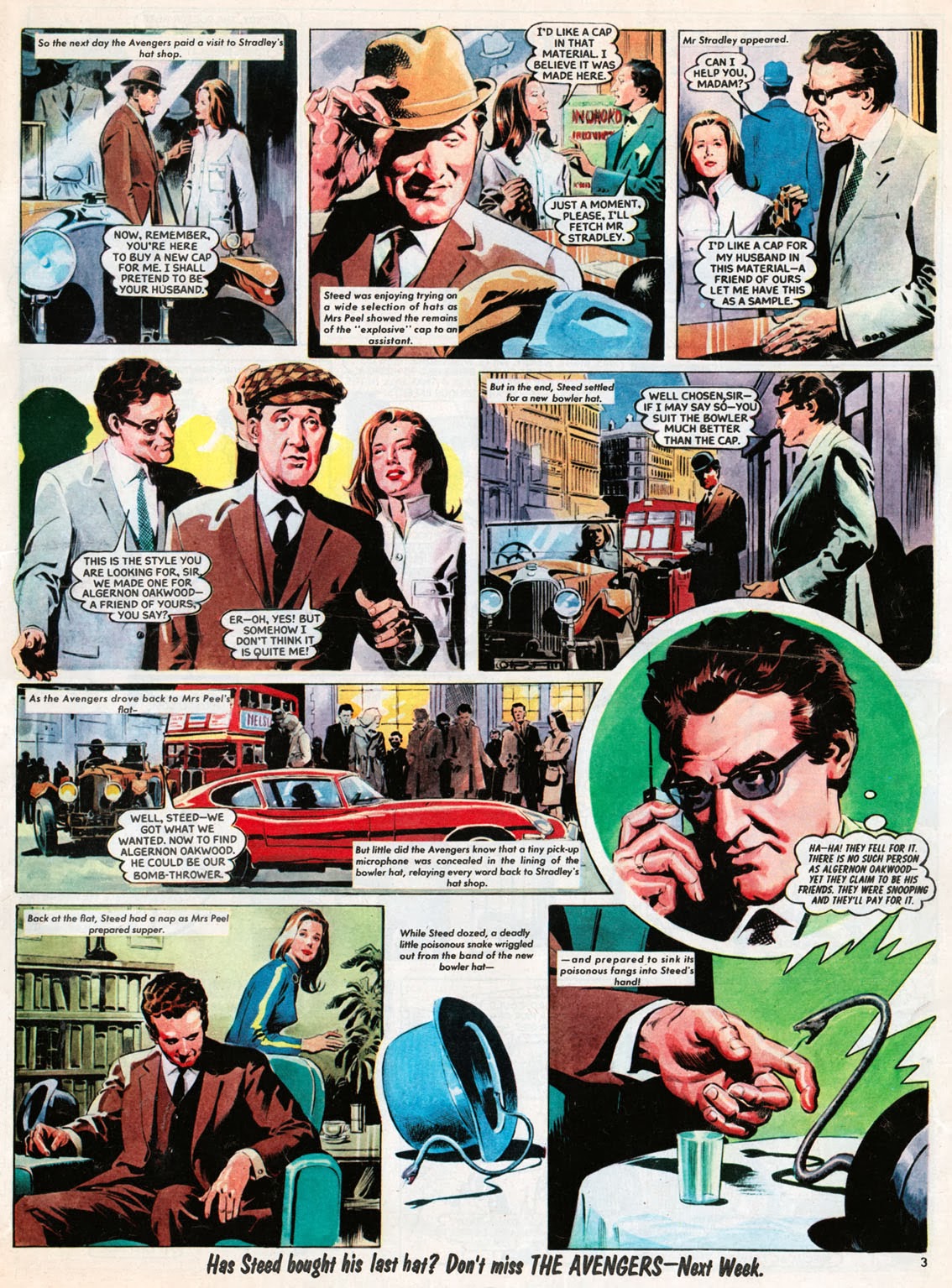 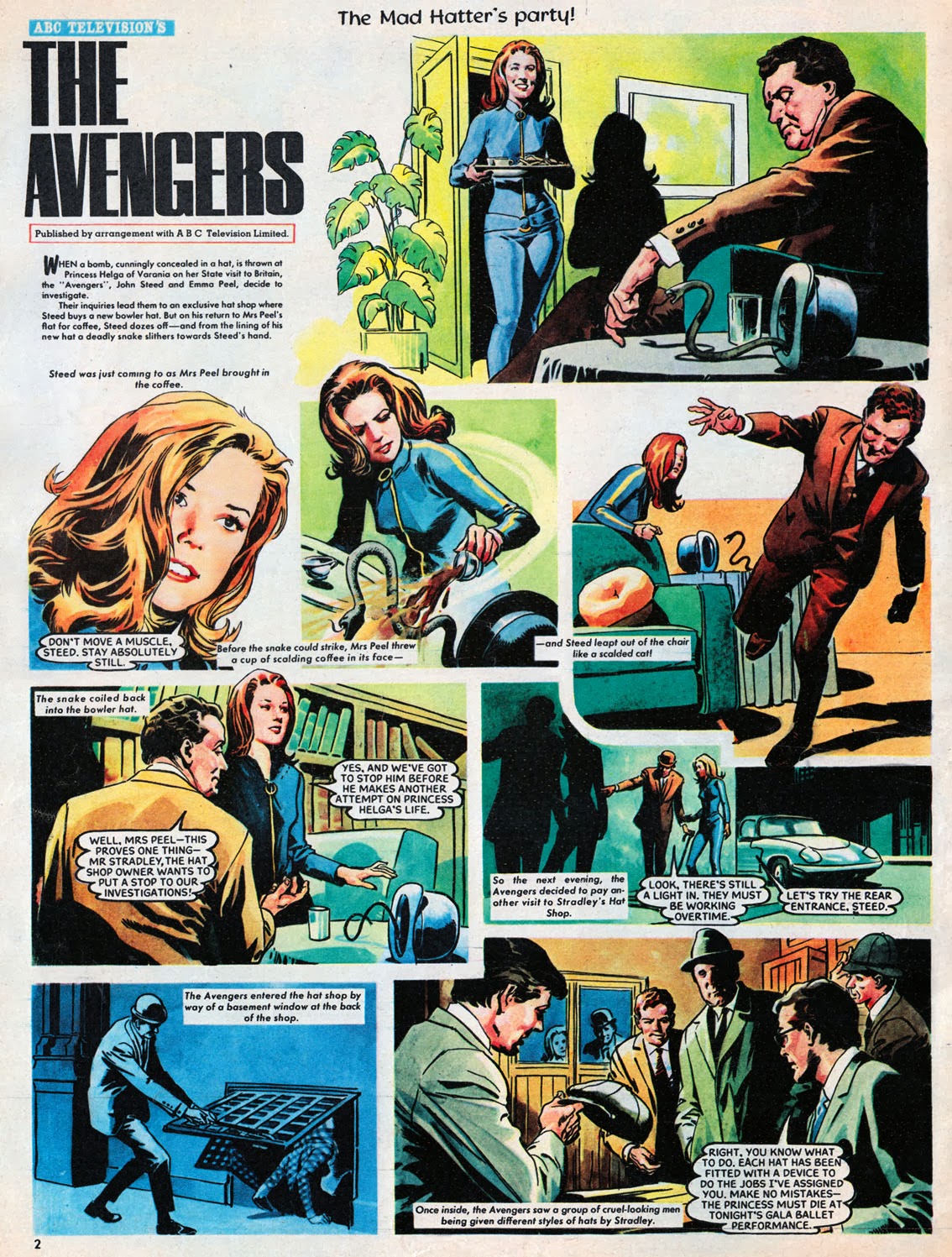 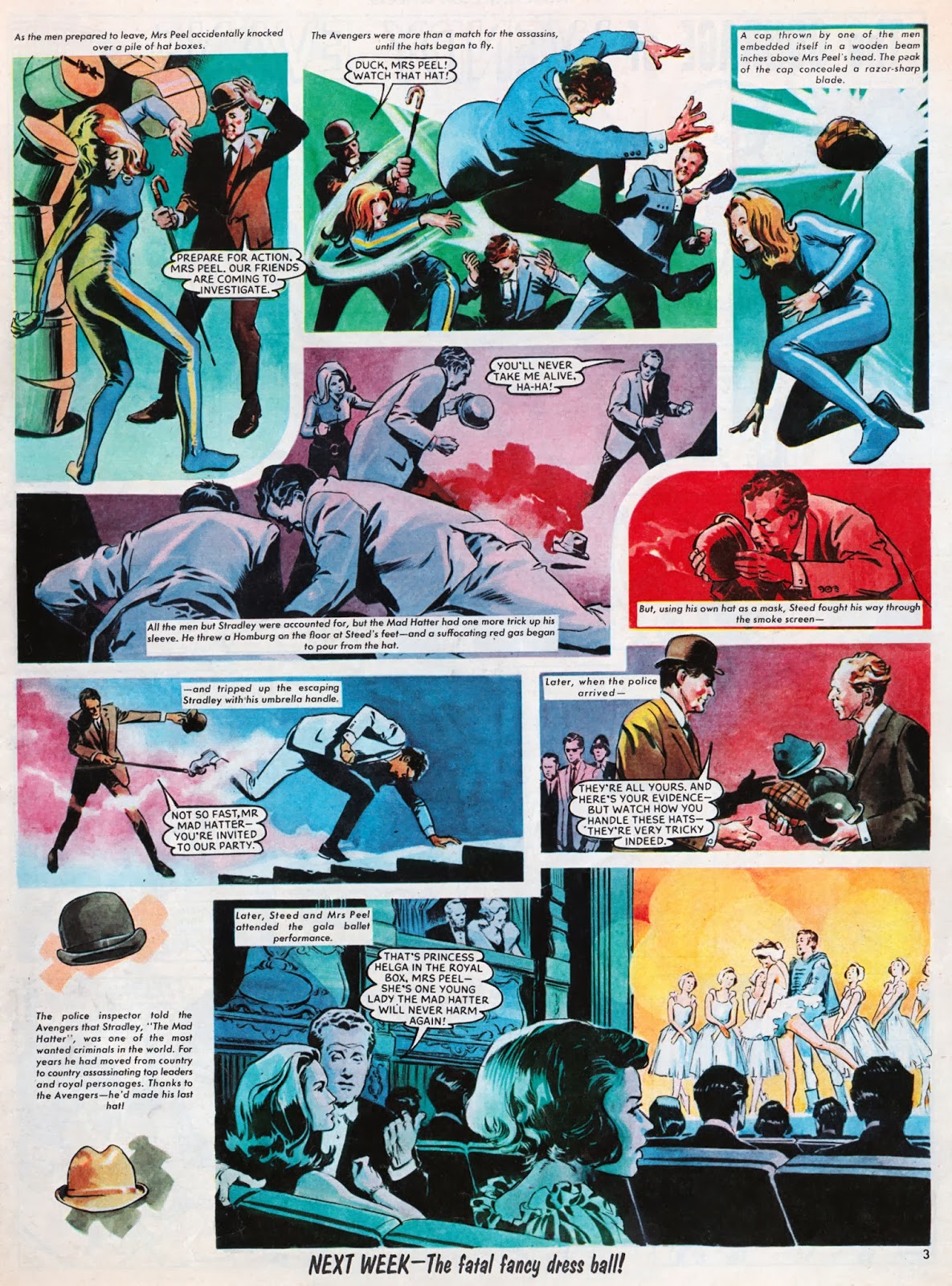 The license for the strip was soon taken up by TV Comic after the run in Diana ended, but Polystyle's version wasn't really in the same league.

I'll buy it in hardcover. Where do I sign???

It would make a nice collection wouldn't it, Kris? Not too many pages either, so it wouldn't be too expensive.

By the way, your videos reviewing the format of the omnibus reprints are very useful. I was thinking of buying Green Lantern Omnibus vol.2 but when I saw how tightly bound it was.... I think I'll pass.

These look amazingly good, I never saw them at the time, my sister got the Judy, although she once had a Diana Annual and I remember being really impressed with some of the colour art in a Ballet story.

How apt that this was published in a magazine called "Diana."

I recall there being an American comic (probably a one-off) based on the show, but it was titled "John Steed and Emma Peel" to avoid confusion with Marvel's Avengers.

Interesting that DC Thomson didn't do a glossy adventure comic for boys back in the sixties, despite their rivals having TV21 and Eagle. Still, it didn't do them any harm as their cheap newsprint weeklies outlived those of their competitors.

These Avengers strips are a delight. i didn't see them first time around as I'd by then been sucked into the Ditko/Kirby world of Marvel. their superhero soap opera crushed all before them then.The artwork on these is of a very high quality and deserve reprinting in a collection. Beautiful!

The complete 50th anniversary DVD boxset had an insert reprinting some of the comic strips. It says "The entire 26 x 2 page full colour episodes are scheduled to be reprinted in full in an Avengers Graphic Novel Special to be published in 2011"

It is listed as @ DC Thomson

I couldn't find any evidence that the volume was actually published in 2011 or at all.

Did you scan these yourself and are there any other issues? There's a complete Avengers strips file floating around the net but the scan quality is low. There's also 199-201 scanned by Receptacle Project with scans that are a little better but not as good as yours.

Yes, unless otherwise noted, all the scans on this blog are ones I've done from my collection. I never nick images from other sites as some blogs do.

I don't think the book scheduled for 2011 was published, or we'd have seen some publicity about it.

There they are! Bigger than I thought!

I must say the artwork is excellent very remeniscant of frank belamy it must have taken ages to do, do you have any other examples of this artists work?

I don't think I have, sorry.

Yes, already covered that a year ago: