Gordon Bell's distinctive style will be familiar to the millions of children who read his comic strips over the last few decades. He began working for The Beano in 1958 on a strip called Pom-Pom, but his most fondly remembered characters came later. Who can forget the excellent Spoofer McGraw (He Tells Tall Tales) in Sparky in the late 1960s to early 1970s? Or the pure fun of Pup Parade for The Beano during the same period? 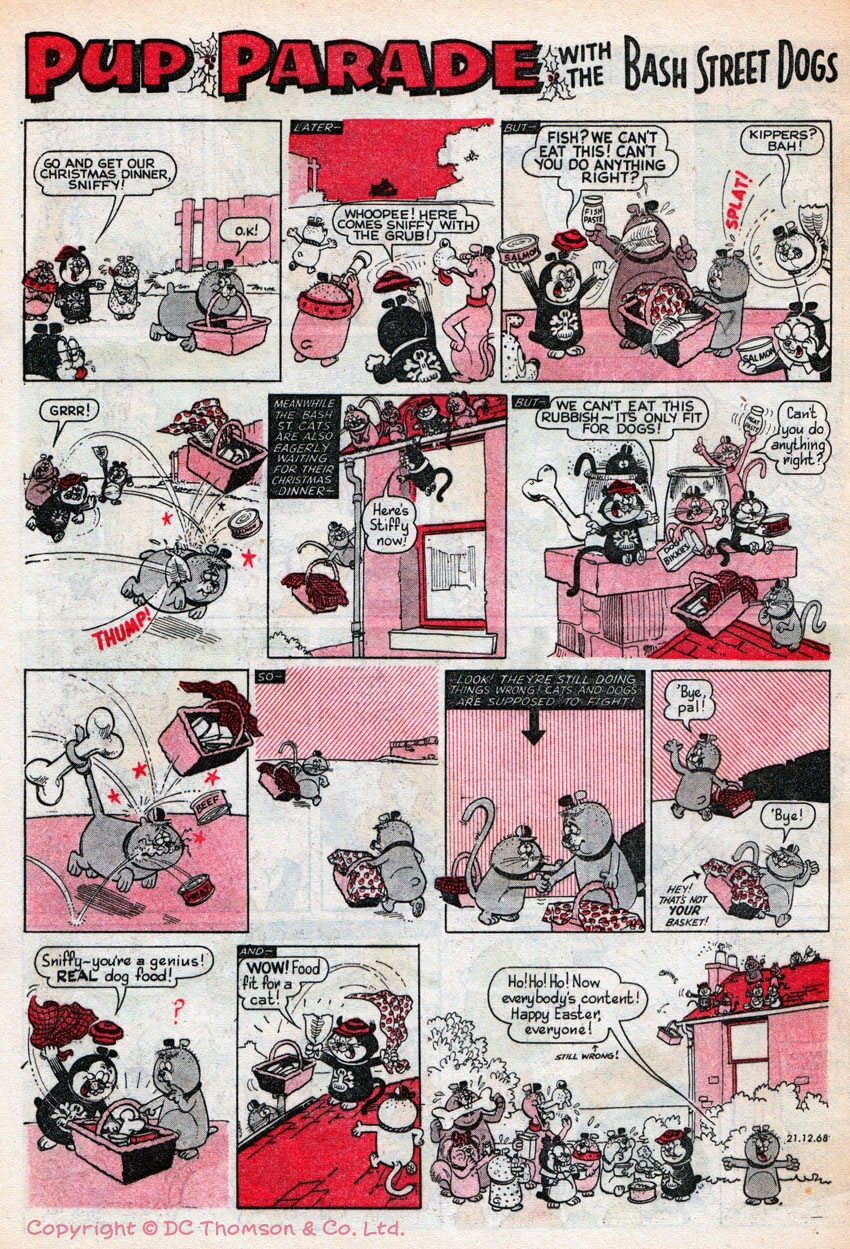 As well as being assigned his own strips to draw, Mr.Bell was often called on to fill-in on other strips. A task he succeeded at admirably. Although The Beano was always uncredited in the 1960s I always noticed when "the other artist" did a fill-in on a particular week and enjoyed his versions of the characters. Here are examples of his work on Dennis the Menace (Beano No.1268, Nov.5th 1966), The Bash Street Kids (Beano 1282, Feb.11th 1967), and Roger the Dodger (Beano 1331, Jan.20th 1968)... 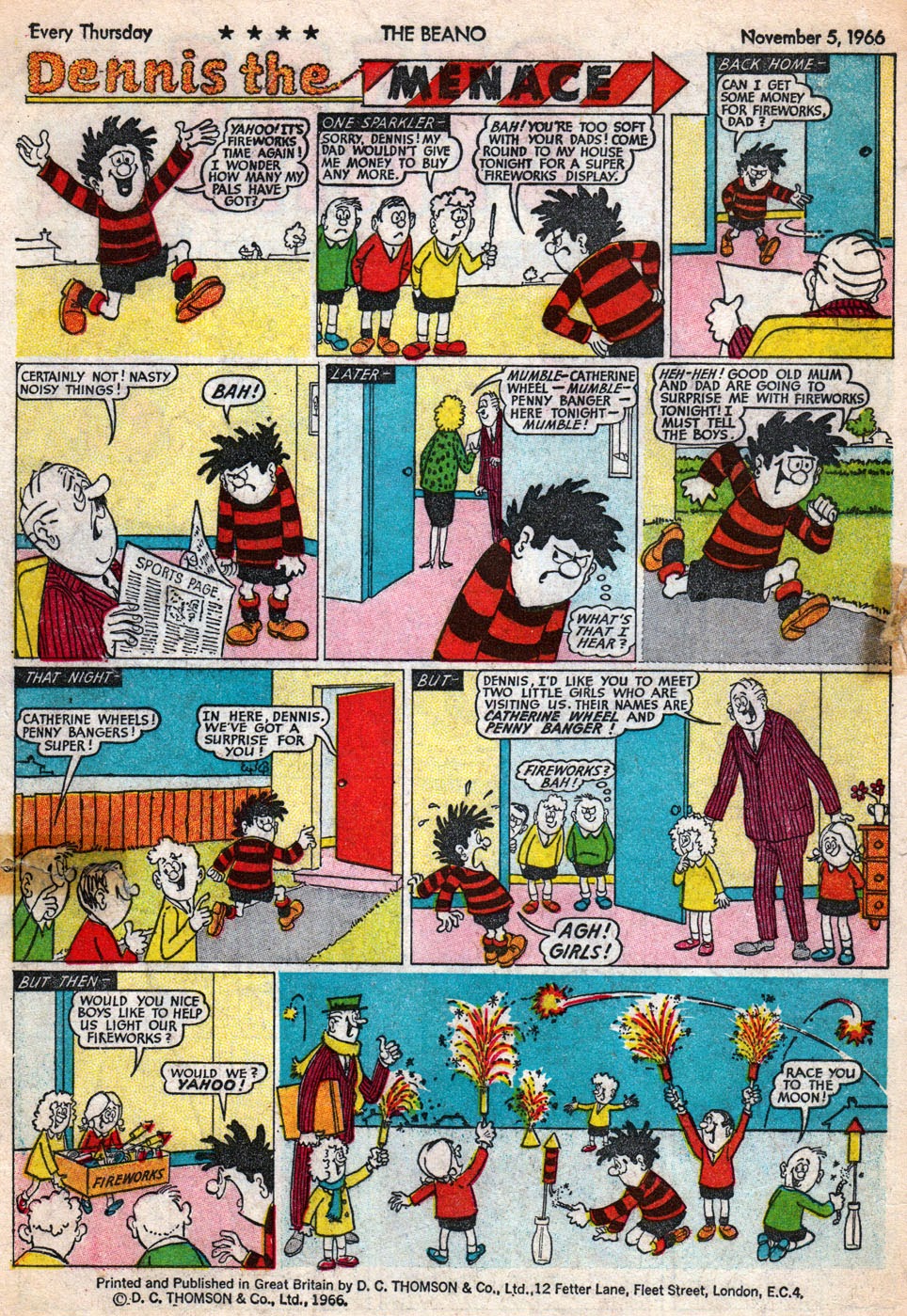 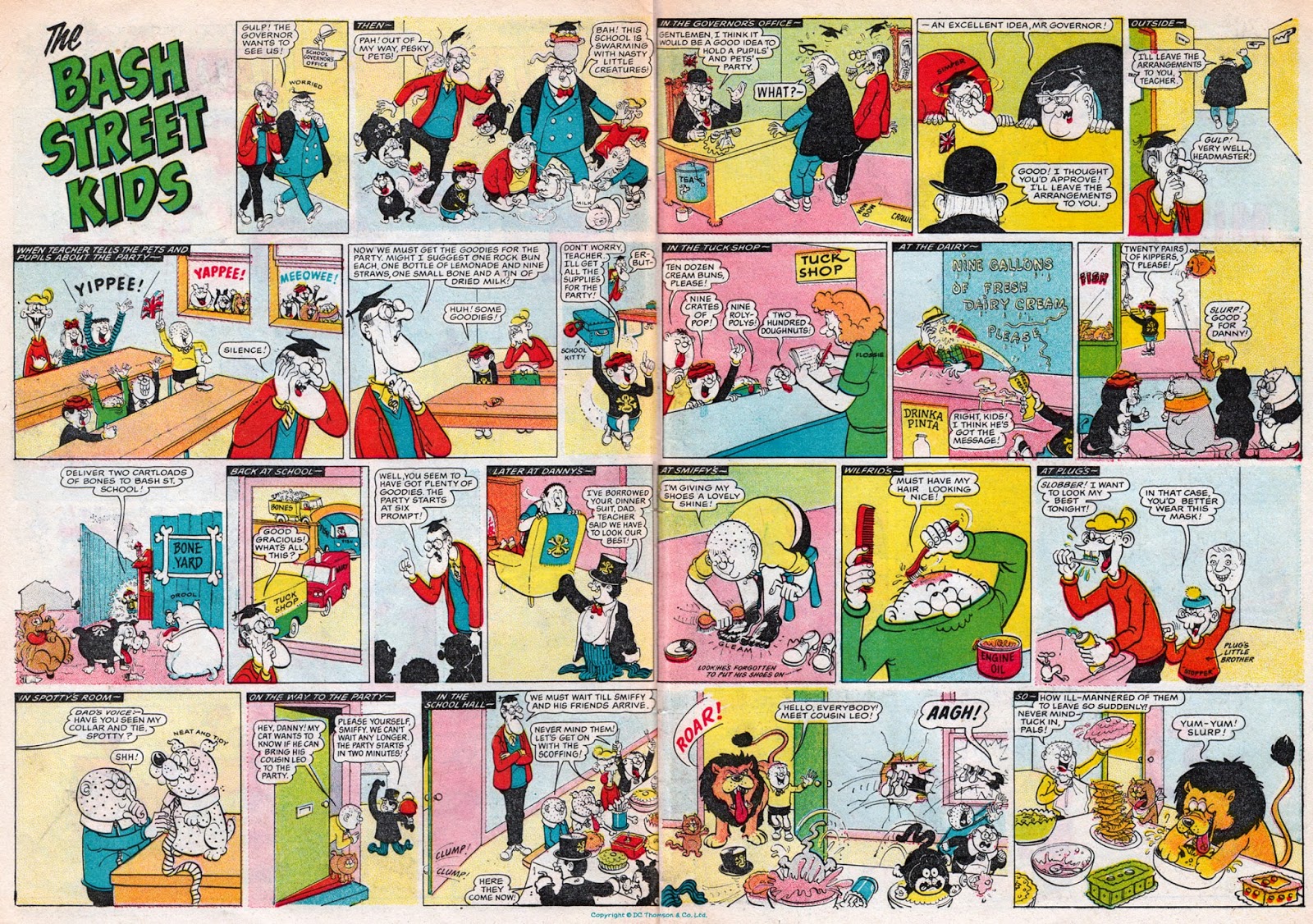 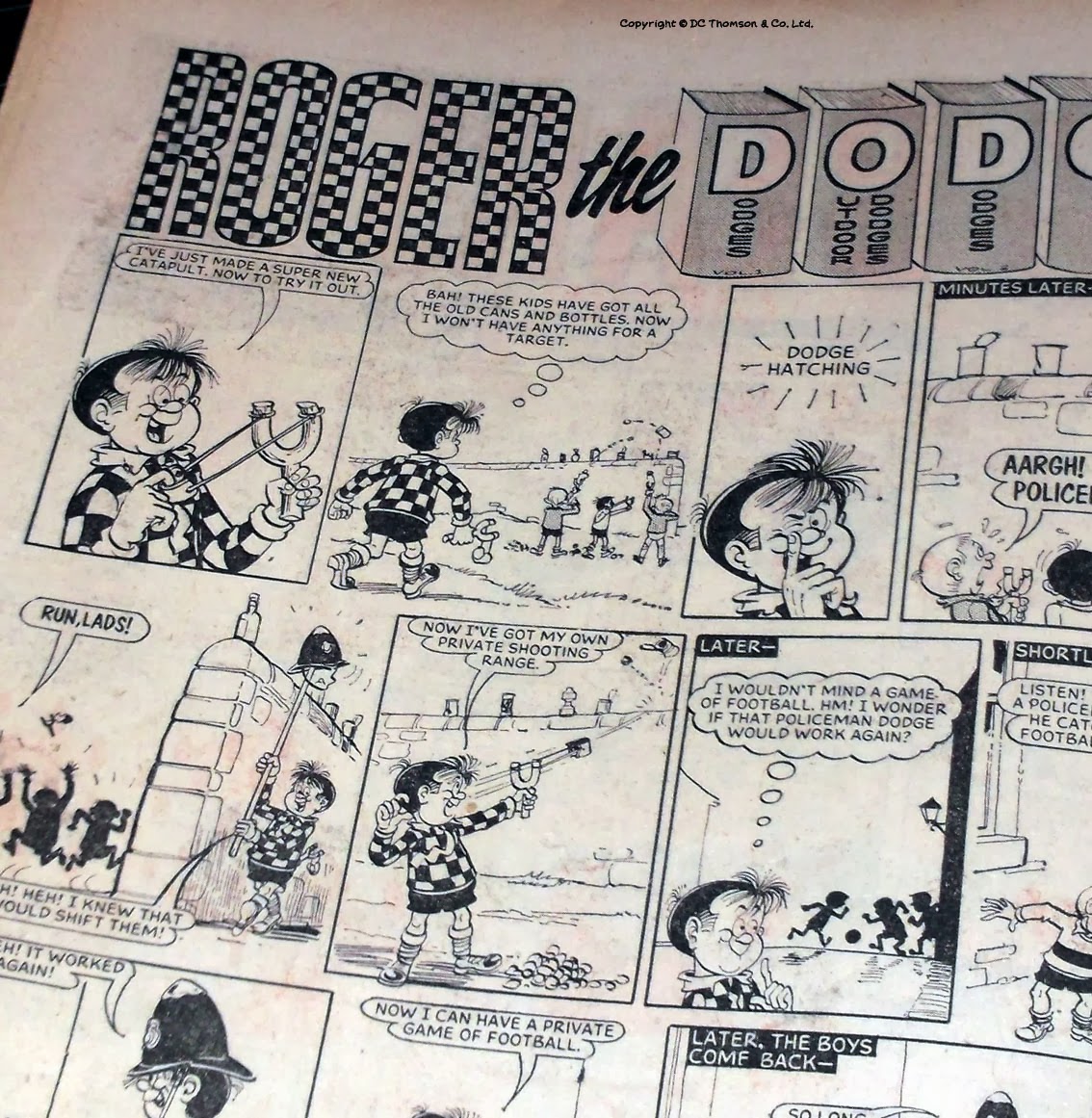 (Incidentally, that Bash Street spread features an early appearance of the pets who would become the Bash Street Dogs and Cats. Take a closer look...) 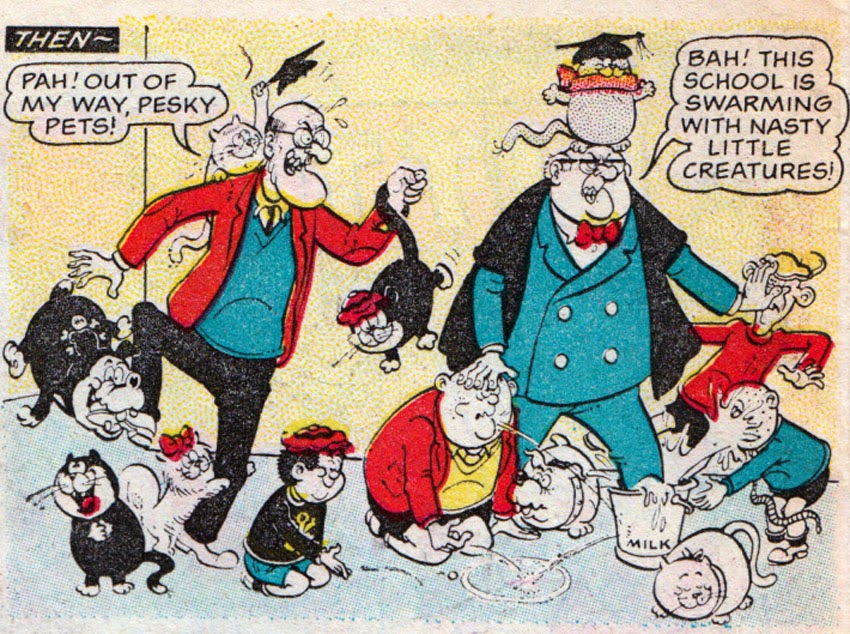 Gordon Bell's artwork had a very pleasant and amusing quality about it. As Peter Gray said over on his blog, Gordon was excellent at drawing funny facial expressions. His work was always joyful and solidly professional.

My condolences to Mr.Bell's family and friends at this sad time.

The Courier has published an obituary with more information on the artist's long career: http://www.thecourier.co.uk/news/obituaries/courier-fax-cartoonist-gordon-bell-1.225836

-Leo Baxendale also did a kind of Pup Parade in the early 60's also David Sutherland..so not the first Bash Street pups..

His work to me is pure joy!!

One Beano annual in the 60's he ghosted loads of characters..

Glad he was cartooning till the end..a lovely legacy thanks Gordon.

Thanks Peter. I had every Beano from 1964 to 1974 but threw most of them out over the years for space. Have about 20 from 1966 to 71 I've kept but not the first Pup Parade. Have all the annuals from that period though.

I often enjoyed Gordon's fill-ins on strips more than the regular artist! And his own regular strips were excellent of course. Spoofer remains my favourite of his.

With you on Spoofer, Lew - my favourite strip of all as a kid.

This is very sad news. Gordon was one of the first comic cartoonists I met when I started work as the Beano office junior in 1977. When Harry Crammond told me to pick any strip from the comic and have a go at a script, Pup Parade was my first choice. Amazingly, that script was passed unchanged, and Gordon brought it to life in his usual consummate style.

I wrote the Pups for the next eighteen months until I moved out of the Beano to begin work with Dave Donaldson on the development of Nutty comic, where I teamed up with Gordon again for the 'Scoopy' strip.

In one of my early scripts for the Pups, I had the temerity to sketch out how I saw one of the frames. Gordon grinned when he picked up the script, and through gritted teeth advised me to stick to writing. Looking back, I don't blame him one bit - it was ridiculously arrogant and rude of me.

But by the time it came for me to begin my own cartooning career six years later, he could not have been more supportive, and even presented me with my first set of dip pens and ink at my leaving do. He was always utterly charming, and his work was a genuine inspiration to me, and I'm sure many others.

Thanks for sharing that very touching anecdote, Steve.

The mark of a great cartoonist is being able to immediately recognise their work, and Gordon's is that. I've grown to like his stuff more and more over the years, RIP to him.

Spoofer's definitely a favourite of mine too!

It's very sad to hear this - he did a great job on all of his strips.

Another name to an art style that I recognise straight off, Pup Parade was a favourite of mine as a kid. RIP.

Very sad to hear of Gordon's passing. Spoofer answered a question I sent in, in an issue in March 1972 (can't remember the issue date). Gordon's style was immediately recognisable (as Hibernia Comics points out) and very entertaining.

Spoofer is one of the all time greats. RIP Gordon, and thanks!

Ian Morgan? I have that issue so I've added the Spoofer page to the post above. I hope you spent your 50p postal order wisely. :)

Yes, Lew, it was indeed me!! I really appreciate you posting the March 4th Spoofer story, as I lost my copy of The Sparky for that date a long way back. Lovely to see it once again - I was a star for the day when I took that issue to school and showed it to my mates. I especially like that final frame that Gordon drew! Spoofer would be in my Top 3 of comic characters.

I spent my 50p on a pack of fibre tip pens (which used to wear out in a matter of weeks), so not sure if I spent it wisely!

I've only really discovered comics blogs in the last year or so, including Blimey! and it's wonderful to see some of those old characters from the mid 60's to mid 70's once again, and see some of the later strips (including a certain Tom Thug!)enjoyed by new generations.

Again, many thanks Lew, you've made a middle aged man feel 12 again!!

It's great to finally learn more about the artists at DC Thomson, after their work had such a profound effect on me as a small person. I've really enjoyed reading Gordon Bell's Bash Street comic libraries and specials lately - always pure fun. My enduring memory of his style is the unique way he drew Sid's hair...

Yes, he was a brilliant cartoonist. Very enjoyable style.

Delighted to have stumbled across this tribute to my late father. Growing up I thought it was normal to have a Dad who drew for The Beano (and all the others). It's also reminded me of just how many characters he drew.

His personal favourite was Minnie the Minx, closely followed by Sniffy in The Pups. He always said the best thing about his job was "Making children laugh".

Wonderful to hear from you, Donald. Thank you for commenting.

Yes, your dad was very prolific wasn't he? A superb art style that always cheered me up when I saw it. I'm the current artist on Pup Parade now and it's an honour to work on the characters your dad drew, and which I enjoyed so much when I was a child.