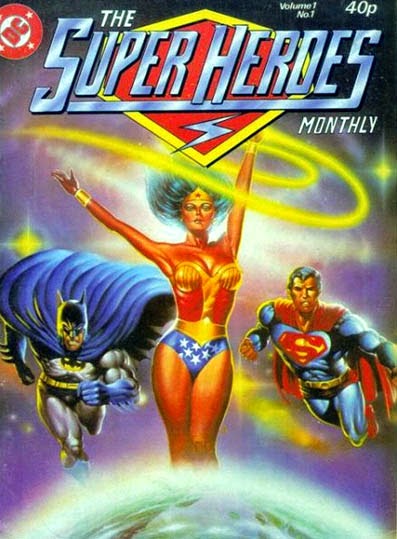 There is shock and sadness in the British comics community this week as we have learned of the passing of Vanessa Morgan, editor and publisher.

Vanessa was a key figure in the Society of Strip Illustration (SSI) in the 1980s, and will also be familiar to comic fans back then as the editor of Egmont's The Superheroes Monthly, a 52 page black and white comic reprinting classic DC strips.

I didn't know Vanessa very well but I remember her being very much a part of the regular crowd in the 80s/90s at the Westminster Marts and the annual UK Comic Art Conventions in London. She was a witty, intelligent person who was good company and well liked.

John Freeman has a more thorough tribute to her over on his Down The Tubes website, with a heartfelt contribution from writer Peter Hogan, a good friend of Vanessa. Click here to visit the page.

My sincere condolences to Vanessa's family and friends at this very sad time.
Posted by Lew Stringer at 07:30

That's very sad news! I never met Vanessa but I always thought of her as the British equivalent of Jenette Kahn: shaking up the staid 'boys' own' world of comics with a fresh and exciting new outlook!

Surprised and a bit depressed to find few comments posted here, but perhaps the link to Pete Hogan’s bit says it all. But I’ll add my own. I remember Vanessa as the person that personalised those DC reprints in the early 80s, and who gave so many opportunities to fledgling talents like Bryan Talbot, et al, back when American dreams were just that. She promoted and supported people and maintained an interest in their careers long after the rest of the world caught on.
I know this because she inadvertently became my neighbour when I moved to Tulse Hill, south London, in the 90s and we often shared a drink in our favourite local, the Railway Tavern, with her partner Chris. She regaled me with many stories of the early 80s comics scene (which I shall carry to my own grave).
But, yeah, she was a chum, somebody I’d regularly see in the Co-op or meet on the train. She was a dear friend. I knew about her cancer, she told me she’d got better. I remember how we laughed when her voice got Smurf-i-fied from a follow-up operation, and how it was better the last time I saw her a couple of months ago and she said she was fine. She lied. Bless her, she lied. I’ve found out since that she’d been far from fine. She’d already been in a hospice and demanded to go home. And that’s the last time I saw her, saying she was looking forward to retiring and maybe she’d start doing volunteer work with me at the Cartoon Museum.
I’m happy and gutted to report that I’m designing the booklet for her funeral, which will take place at West Norwood crematorium in a couple of weeks – details I’m sure will be on her best friend Peter Hogan’s facebook page.
The British comic world has lost an unsung heroine, a Sol Brodsky, or a Julie Schwartz. I’ve lost a really good friend with big eyes and a rusty laugh. I’m not a religious man, but fuck it – God bless.

Thanks Steve, and my condolences for the loss of such a close friend. I wish I'd known Vanessa better. I hadn't seen her for many years but I remember her laugh and how full of life she was. Take care Steve.