Doctor Who and The Daft Dimension 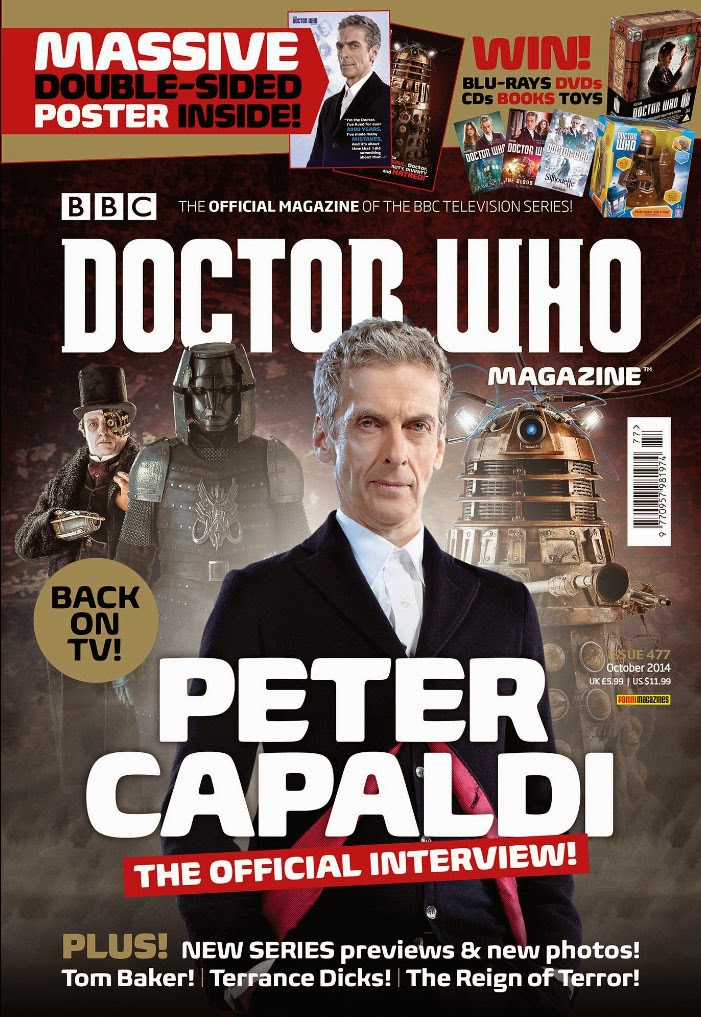 There's a brand new series of Doctor Who commencing on BBC One on Saturday night (7.50pm - 9.10pm) and to whet your appetites there's a new issue of Doctor Who Magazine out today.

As you might expect, this issue is a great 'jumping on point' for new and lapsed readers, with extra pages (a total of 100!) and it's bagged with a huge double-sided poster of the new Doctor and a Dalek. Tear open the plastic outer wrapper (shown above) and the magazine inside has a very classy minimalist cover... 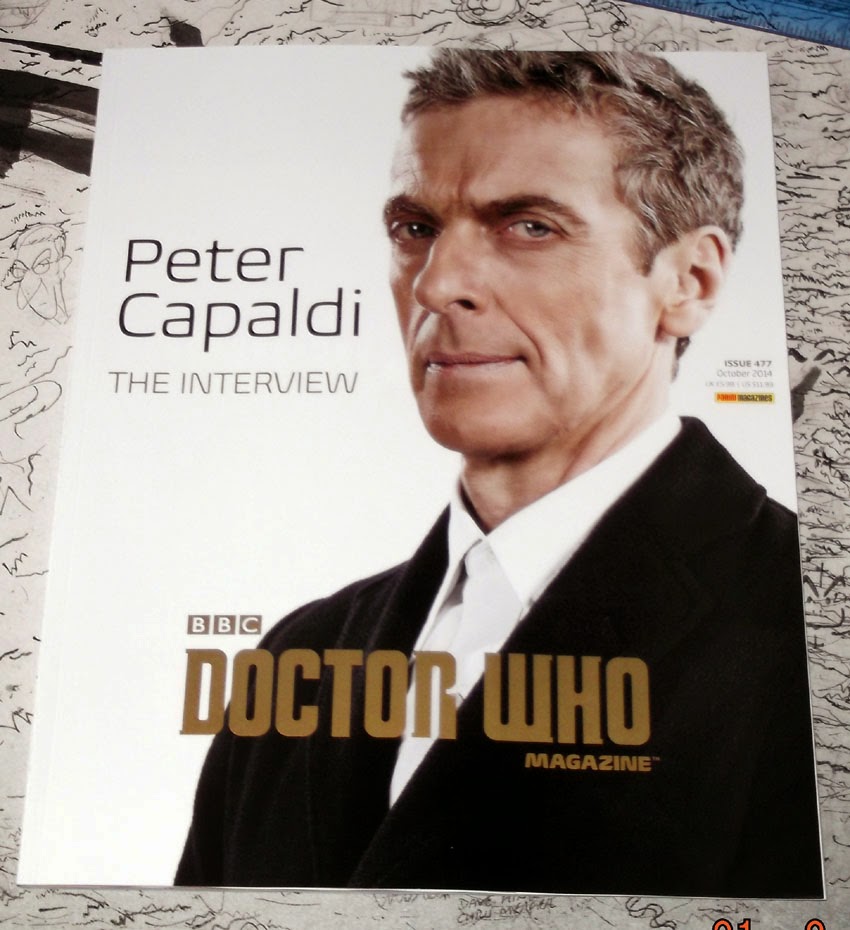 This issue begins the comic strip adventures of the 12th Doctor and Clara, in a 12 page story The Eye of Torment by Scott Gray, Martin Geraghty, David Roach, and James Offredi. 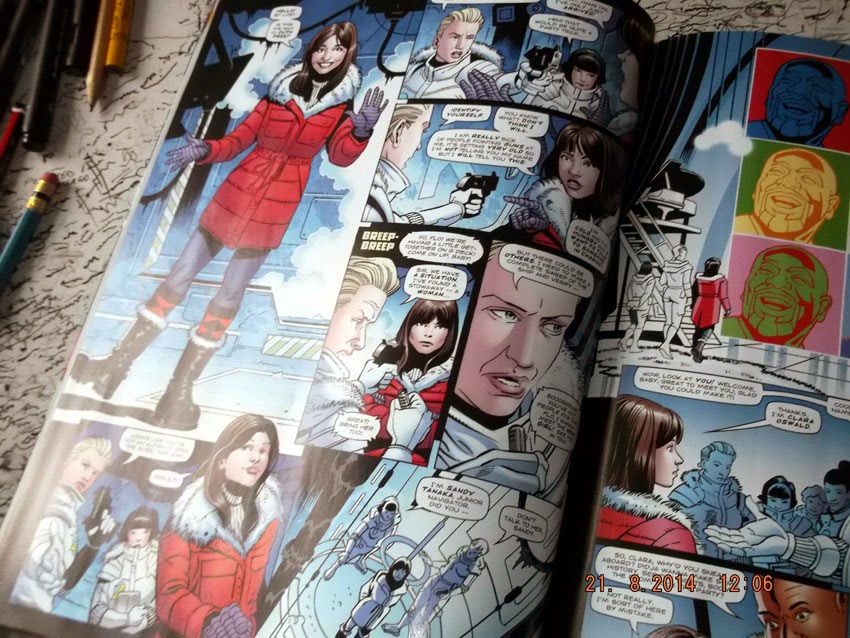 There's another comic strip in there too. The debut of a new humour mini-strip, - The Daft Dimension by... er... me! 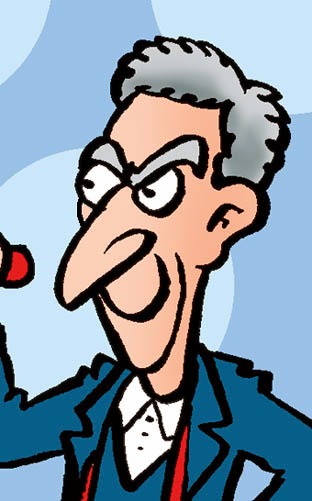 I'm really pleased to have been invited aboard the TARDIS as the official magazine's latest cartoonist and I hope readers enjoy the strip. I've been reading Doctor Who Magazine on and off (mainly on) since it began as Doctor Who Weekly in 1979, and I've seen most episodes of the TV show since its early days of 1963/64. So as you can probably guess, I'm over the moon to be in the pages of DWM but at the same time apprehensive as to the reaction from this new audience. Be gentle with me, Whovians!

Of course, the comic strips are only part of DWM. The bulk of the magazine features a wealth of material about the new series and its rich heritage. This issue sees previews of the first four episodes of the 2014 series, an exclusive interview with Peter Capaldi, the third part of an interview with script editor Terrance Dicks, a look at the career of Dalek voice-artist Peter Hawkins, a nice big 10 page feature on the 1964 story The Reign of Terror, an interview with Tom Baker, Louise Jameson and Philip Hinchcliffe, reviews, and much more. As always, this is the essential publication for fans of Doctor Who. Doctor Who Magazine No.477. 100 pages. £5.99. Published by Panini UK. Out now!  Check out the magazine's official website for more info:
http://www.doctorwhomagazine.com/
Posted by Lew Stringer at 14:22

Congratulations on your cartoon strip, Lew. I can't really call myself a Dr. Who fan, I watched it regularly in the '70s then more sporadically in the '80s and hardly at all in the modern era. I bought Dr. Who Weekly too when it came out in October 1979 but I only stuck with it for a few issues. It may be heresy but Michael Grade was right in his criticism of the '80s Who as it was very inferior, in my opinion, to the '70s show - really it would have been better if it had ended in 1979 rather than '89. I've tried watching a few of the modern Who episodes but I find them bland and lacking in any real drama or menace especially as they no longer have the cliffhanger endings.

Thanks Colin. Being a bit older than you I used to watch it in the 1960s and it was the 'Dalekmania' fad that kept me watching really. I was a Dalek fan, more than a Doctor Who fan, so I sometimes drifted away from the show but a new Dalek story would always bring me back.

I know what you mean about the 1980s episodes. There were some good stories in there though, but the series needed a bigger budget. I really like the show since it returned in 2005. Yes, the lack of cliffhangers are a shame but I think the show looks very slick now, the scripts are tighter, and the performances are great.

It must be tough trying to get down a characterisation when you haven't yet seen the character in action! (at least, not in his 'proper' form on TV)

I'm not really a caricaturist so I'm going for a cartoon impression of the characters rather than a detailed likeness. Yes, it will help once the series begins. We'll be able to see any changes to the TARDIS interior for one thing.

Best of lick with the new strip Lew. The good doctor has been having a grand old time since his return.I'm an old timer who saw it's beginnings as an eleven year old boy back in the 1960's. Of course , I only dipped in and out over this past fifty years.In my dotage , I have enjoyed some of the convoluted cosmic storylines and am actually looking forward to what Capaldi can do with the part. I think a "silver fox" doctor should shake it up a bit and remind the youngsters that us oldies are n't dead until we choose to lie down!!.

Thanks Paddykool! Yes, it sounds like they're taking the series into a new, more serious direction. Sounds interesting.

Congratulations on this Lew. Can't think of anyone better to do the strip, and that cartoon image of Peter Capaldi is fantastic.

Thanks Mark! I'm drawing the next one today.